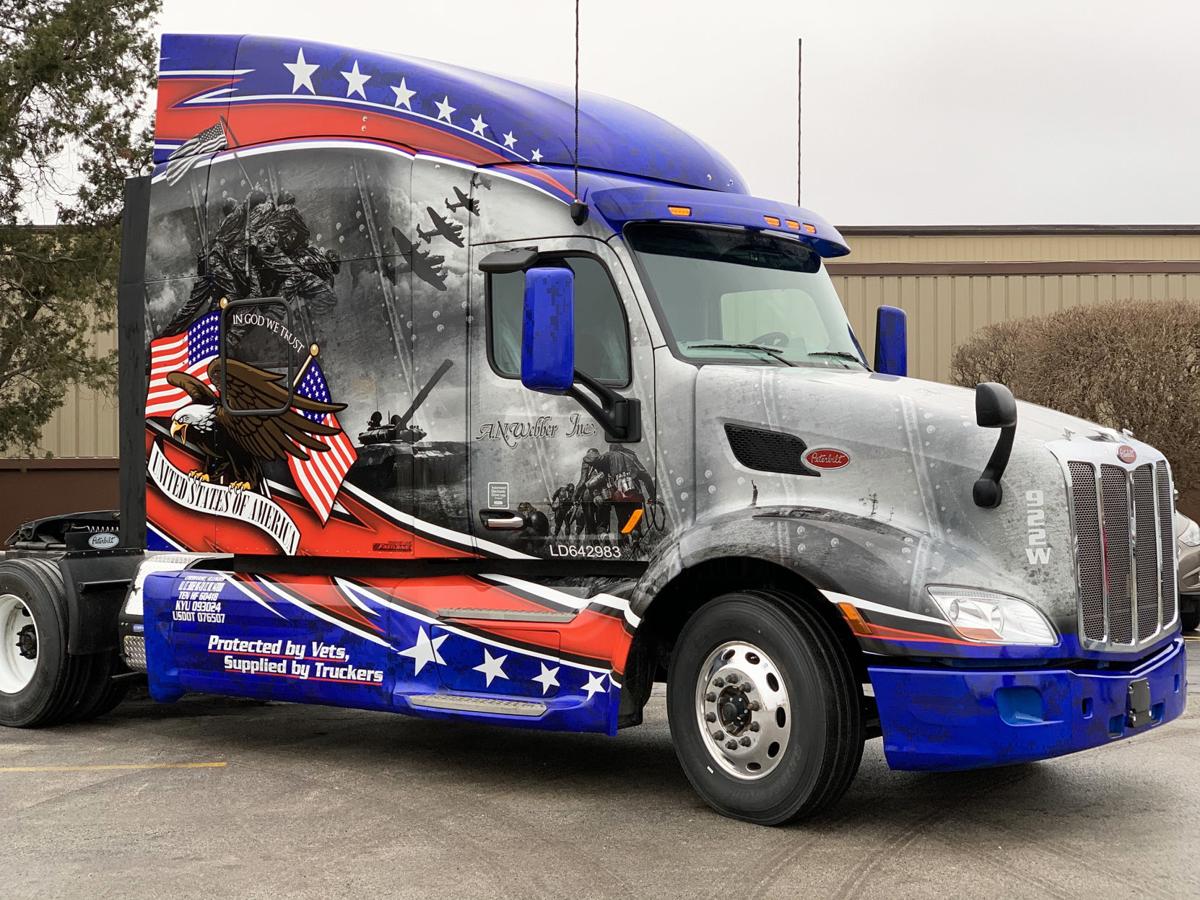 This 2020 Peterbilt semi was recently outfitted in a patriotic vinyl wrap which covers 100 percent of the truck. 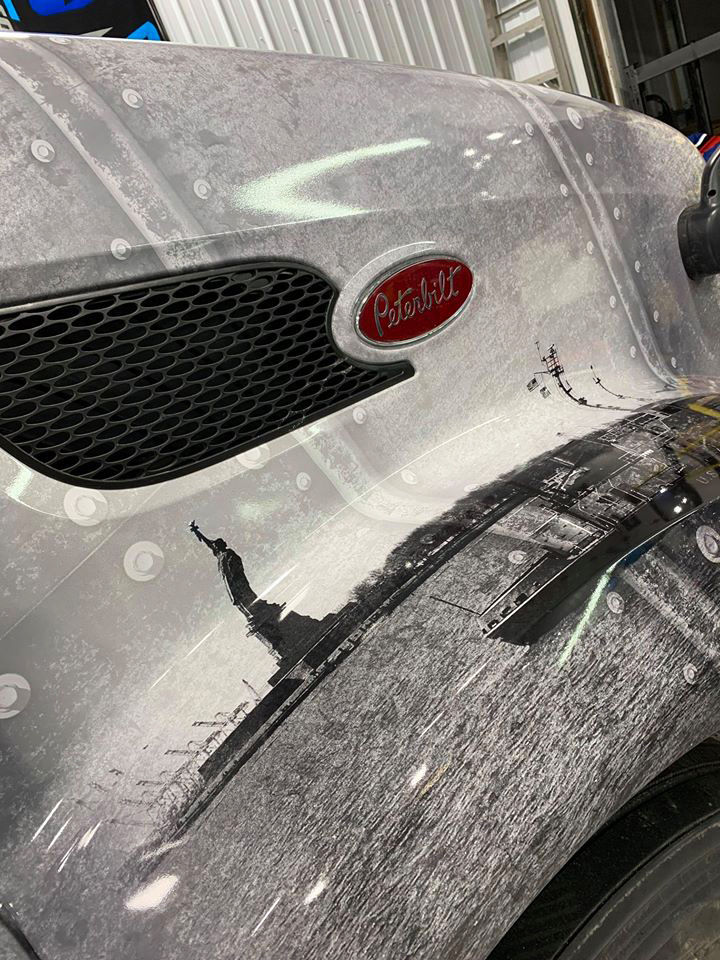 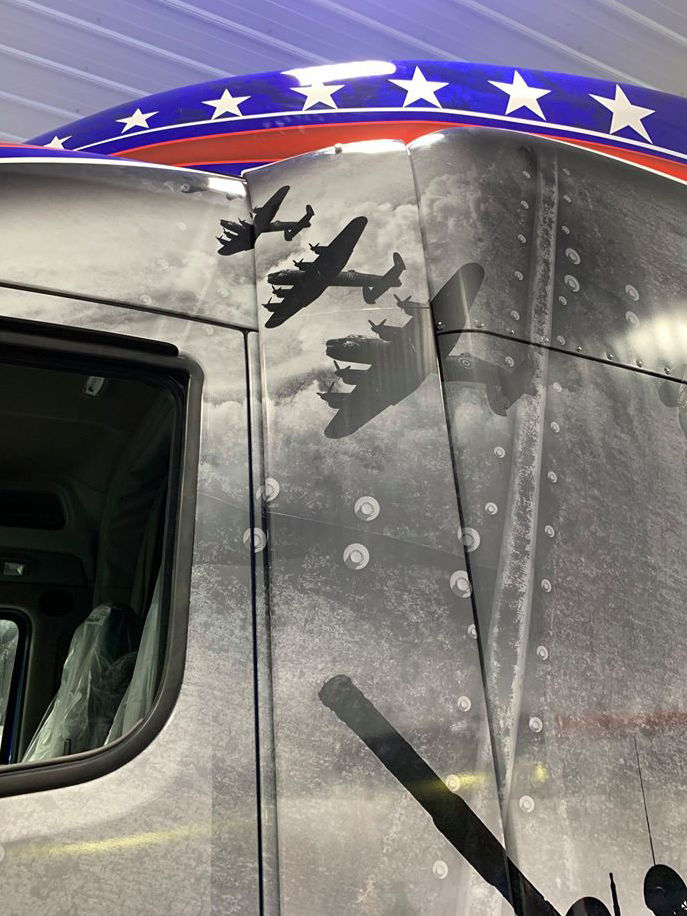 This 2020 Peterbilt semi was recently outfitted in a patriotic vinyl wrap which covers 100 percent of the truck.

KANKAKEE — It would be fair to say the ownership of A.N. Webber Inc. in Kankakee is proud of the United States and what the nation stands for.

An observer need look no further than the newest members of the company’s 200-truck fleet.

“We’re very patriotic,” explained Todd Perzee, president of Webber Inc. “And we have many vets working for us. We are very proud of that fact.”

Of the company’s 268-member workforce, 64 are veterans. That’s 24 percent of its workforce.

The idea for the truck wrap came about as Perzee and company owner Alan Webber were chatting one day at the office.

“Alan wanted to do something to honor veterans. He came up with the truck wrap idea,” Perzee said.

The two men took the idea to Fastlane Wraps in Chebanse. Fastlane has a long history with Webber trucking. Fastlane began putting some concepts on the computer screen, and Webber and Perzee were instantly blown away with the initial design.

After a series of modifications, all parties agreed the concept was set to hit the road. Perzee declined to reveal the cost of the wrap.

After an extensive installation process — about 80 hours between two Fastlane graphic installers — the truck, with every square inch of the large cab covered with the red, white and blue wrap, was ready to hit the asphalt and display the company’s patriotism.

“We always have liked to show we are proud of our military. But how do we say ‘Thank you’ to our servicemen and women?” Perzee asked.

The truck, which will be criss-crossing the country along its network of highways, will offer the company’s thanks for the men and women who serve.

The truck will not be put on display. This Peterbilt will be a regular part of Webber’s working fleet.

Only on the road for a short time since its transformation, the truck has gained considerable attention.

“Our trucker can’t believe the amount of people who are looking at it and taking pictures and video of it. People are blowing horns. It is an eye-catching design,” Perzee said. “But we didn’t think it would gain this type of attention. The feedback has been great.”

Webber trucks typically stay in service for four to five years. This truck may stay around a little longer.

Chad Brosseau, Fastlane owner and a former union iron worker, said in all there was about 500 square feet of truck to be wrapped. There were 32 separate pieces of wrap which had to be meticulously applied to the truck.

To complete a wrap, several pieces, such as fenders, doors, hood are disassembled, wrapped and then reassembled.

“To make it look like paint, this is the way it must be done,” the 41-year-old Brosseau said. With the truck’s roof some 13 feet off the ground, applying the razor thin layer of wrap took skilled hands — and workers not afraid of heights.

The truck’s finish is smooth and glossy.

Wraps are growing in popularity. Brosseau estimates his company installs about 50 full-vehicle body wraps annually. In all, Fastlane touches between 300-400 vehicles a year. A wrap can be as small as a single door or a fender.

“It’s gone above and beyond what I would have ever imagined. We knew it would create a buzz, it’s super cool.”

{span}Fastlane Wraps was formed in 2007. In 2010, the business expand into the ever-growing motorsports industry.{/span}

{span}By 2014, they would have grown their business into one of the most respected race wrap companies in the nation. By 2017, a decade after its original conception, Fastlane has established itself as one of the go-to graphics providers in the United States, wrapping full-size exotic race cars as well as commercial vehicles.{/span}

{span}Fastlane provides graphics for all industries including commercial fleet, business, motorsports and other signage.{/span}