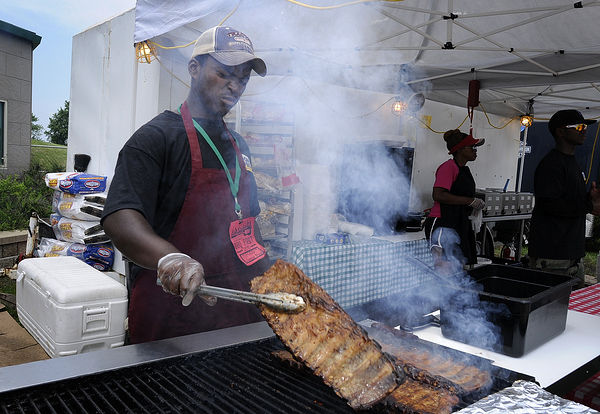 Pete Marshall tries to stay out of the smoke as he glazes slabs of ribs at his stand, Off the Bone Barbeque, from Pickering, Ohio. Marshall, who runs the stand with his twin brother, Kyle, says they cook at 20 ribfests per year and estimates they will sell 600 pounds of ribs in Kankakee this weekend. 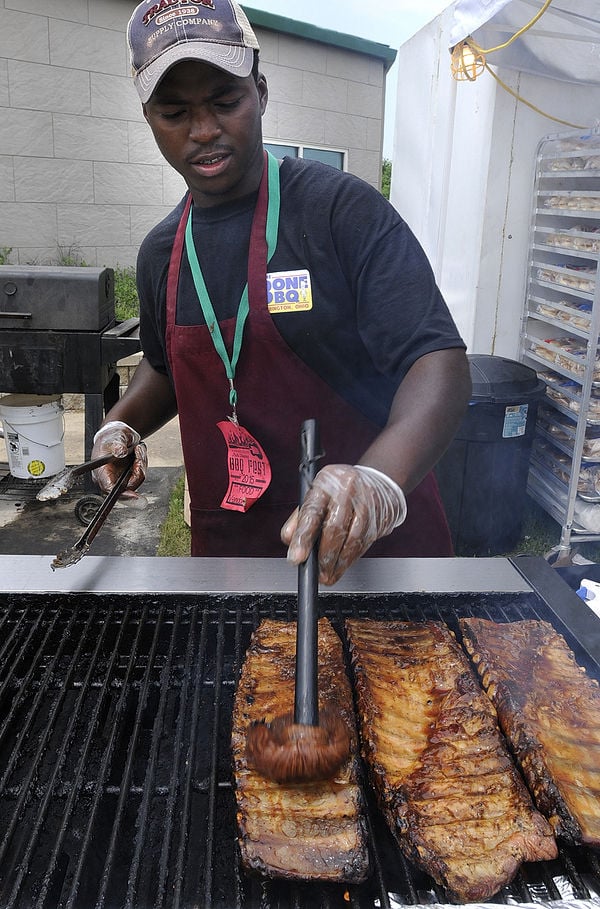 Pete Marshall glazes slabs of ribs at his stand, Off the Bone Barbeque, from Pickering, Ohio. Marshall runs the stand with his brother, Kyle. He credits barbecue with straightening out his life.

Pete Marshall tries to stay out of the smoke as he glazes slabs of ribs at his stand, Off the Bone Barbeque, from Pickering, Ohio. Marshall, who runs the stand with his twin brother, Kyle, says they cook at 20 ribfests per year and estimates they will sell 600 pounds of ribs in Kankakee this weekend.

Pete Marshall glazes slabs of ribs at his stand, Off the Bone Barbeque, from Pickering, Ohio. Marshall runs the stand with his brother, Kyle. He credits barbecue with straightening out his life.

Pete Marshall ventured more than 300 miles last week from Pickerington, Ohio, to serve soul food at BBQ Fest. It was the longest journey the 21-year-old's business, Off the Bone BBQ, ever traveled for a festival, but it was short compared to his life trek.

Marshall was a problem child. None of it showed up on his legal record, but the "ultimate law," his parents, were very aware of his misbehaving. So much so, that his mother, Pansy Cigler, worried how long her son would live.

"We often talked about whether he would have a future," Cigler said. "The way he was going, he wasn't going to be around for a long time."

Then, two years ago, Marshall turned his life completely around. He returned to his roots, his childhood passion for barbecue.

Marshall's interest in barbecue sparked when he was nine years old. His parents encouraged him to work at a young age, and he enjoyed the summer company barbecues gathered.

A visit to the Columbus Jazz and Ribs Fest began some character development. Marshall met vendors from Texas and Virginia, and toured with them for eight summers. It introduced him to a world beyond his backyard, where he mostly grilled hamburgers and hot dogs.

While working festivals, he gazed over the waves of people, knowing that there were hundreds of thousands of people who shared his love of barbecue. He was hooked.

"I enjoy leaving a smile on people's faces," Marshall said. "I love the smell and atmosphere of a barbecue festival. It's just a great time."

His parents' backyard and kitchen became more than a place for burgers and dogs. They became labs consisting of barbecue sauce containers, chicken, pork, brisket, cole slaw and baked beans. Family members were his guinea pigs.

At 19 years old, he took his BBQ craft a step further. He purchased an old horse trailer and converted it into a BBQ trailer. He didn't own a truck at the time, but he became his own boss and birthed Off the Bone BBQ.

"I had to make a decision. Was I going to be an average 20-year-old kid or was I going to grow up and build something?" Marshall said. "I would rather do this while I can get by on two hours of sleep and relax when I get older."

He employed his two brothers and a sister in an effort to share food from his dinner table with the rest of America. Cigler helps, too, because she knows barbecue turned her son's life around.

"Barbecue is good for the soul," Cigler said. "It makes you feel good when you light up those taste buds. We're feeding the soul one bone at a time."

That's what Marshall wants to accomplish at festivals. After all, barbecue fed his soul and made him a young businessman. His dedication to barbecue earned him respect among his BBQ Fest competitors, who also served as his mentors.

"It's amazing that a 21-year-old young man is interested in perfecting his barbecue skill," said George Smith, owner of Brother George's BBQ. "It's off the chain. He's going to be someone we're all going to have to compete with because he has a passion for it and he loves it. He puts a lot of time into it, and it's paying off."

"Brother" George was right about that. Marshall plans to come back to BBQ Fest every year, calling it a "festival on the rise," with musical performances by Vanilla Ice, Salt-N-Pepa, Puddle of Mudd and Local H.

"This is a festival you want to get in early," he said. "If they're having all these big name bands coming in for its fourth year, this thing is going to be huge in 10 years. The people also have been great and have given us plenty of valuable feedback."

Marshall still cooks out of his parents' backyard, and also completes the tasks his mother asks of him. During a typical week, he barbecues at home Monday through Wednesday, packs up and hits the road for a weekend festival on Thursday.

However, Cigler thinks that will develop into something bigger. She sees a small family restaurant in the making.

"I am proud of him," she said. "This is a completely different young man than a few years ago. He detoured and he came back."

That detour, though, was a series of learning lessons and trials by fire that shaped and motivated a young man who wanted to make something of himself.

"Don't be a follower. Be a leader. Have the ambition to do something or make a change," Marshall advised. "Sometimes you have to take that risk to see what's out there and to become the person you want to be."