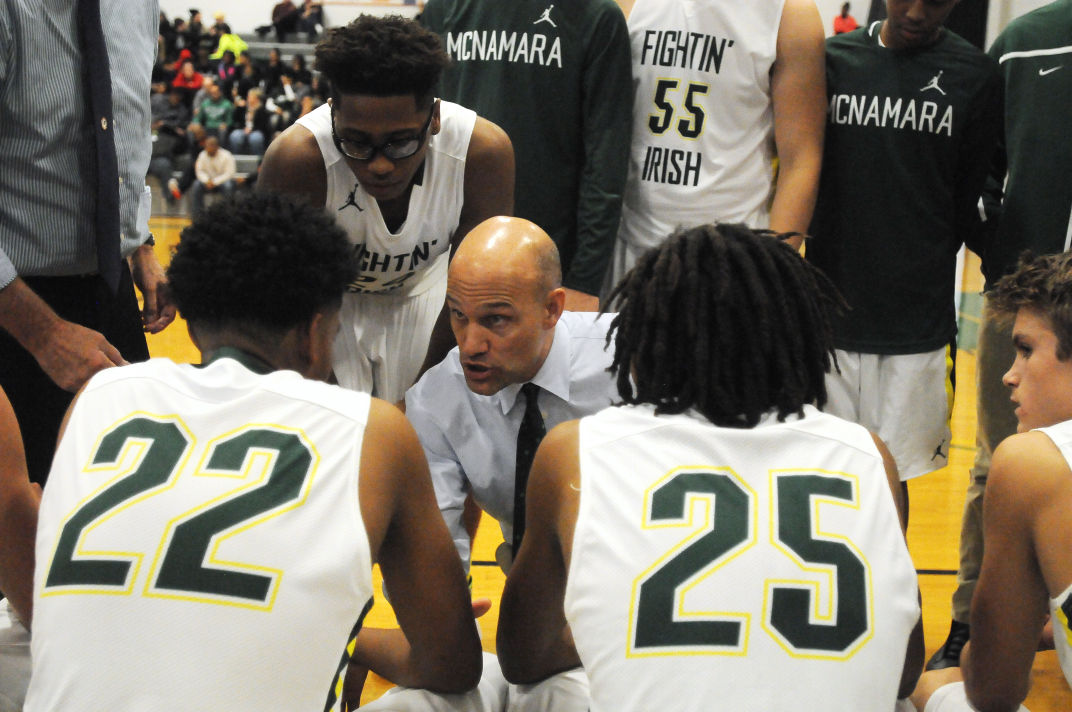 Bishop McNamara’ boys basketball coach Adrian Provost talks with his players during a timeout in a 2015 game against Hales. Provost was one of several area coaches or student-athletes to discuss the Black Lives Matter movement through the perspective of sports. 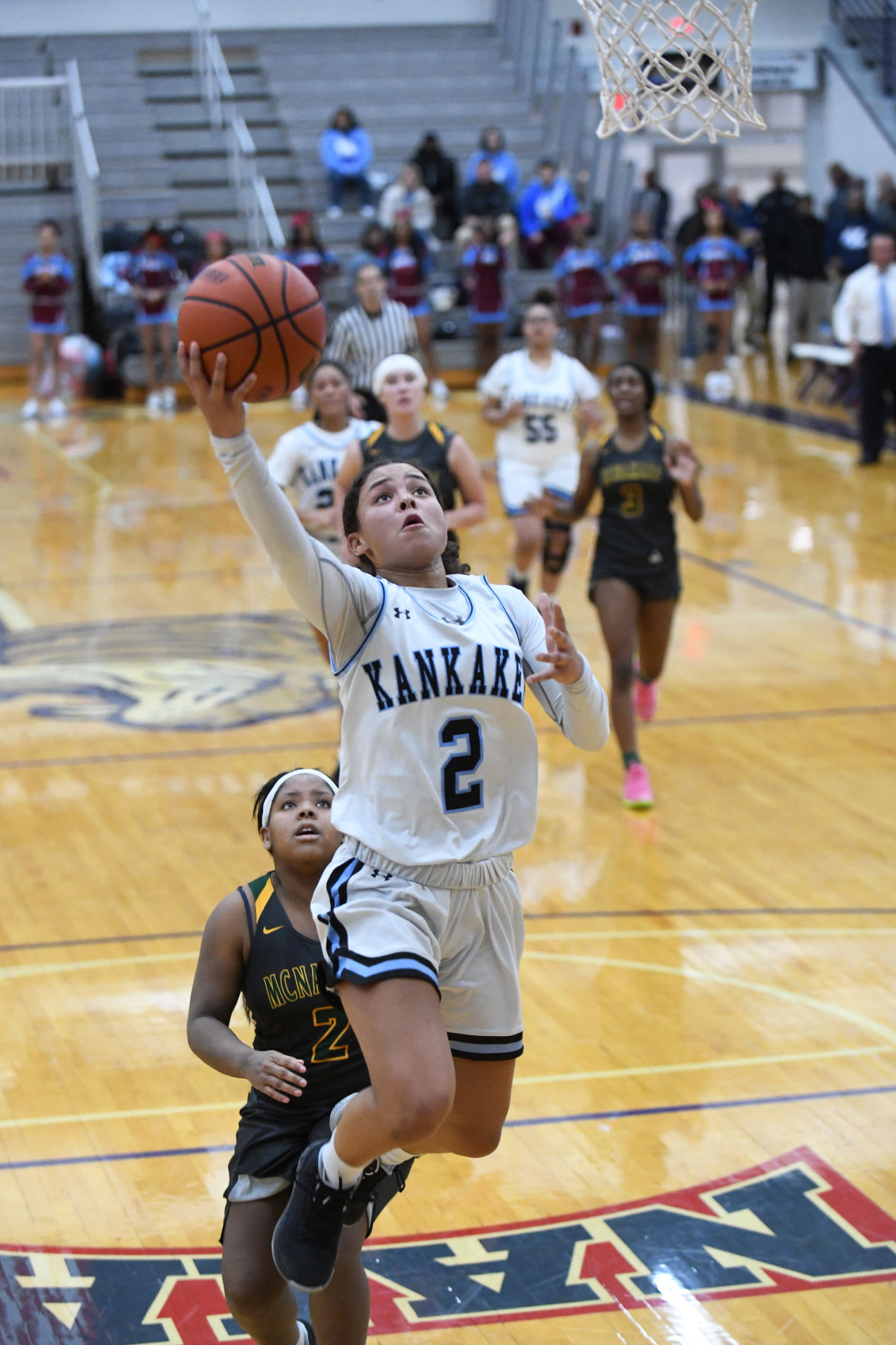 Kankakee’s Avery Jackson hits a layup past Bishop McNamara’s Ty Hill on during a game last season. Jackson and her brother, Owen, were two of several area student-athletes and coaches that discussed the Black Lives Matter movement through the perspective of sports with the Daily Journal.

Bishop McNamara’ boys basketball coach Adrian Provost talks with his players during a timeout in a 2015 game against Hales. Provost was one of several area coaches or student-athletes to discuss the Black Lives Matter movement through the perspective of sports.

Kankakee’s Avery Jackson hits a layup past Bishop McNamara’s Ty Hill on during a game last season. Jackson and her brother, Owen, were two of several area student-athletes and coaches that discussed the Black Lives Matter movement through the perspective of sports with the Daily Journal.

Editor’s note: This is the second story of a two-part series on the role of coaches in the lives of their young athletes during crucial times such as the current social justice movement. This weekend’s story focuses on what can be done to continue the push forward.

As the time gap increases between the senseless killings of Breonna Taylor and George Floyd, as well as several other lesser-profiled tragedies, the large-scale media coverage of protests has dwindled down in favor of another increase of coronavirus cases in the United States.

Like the virus, a societal issue that seems pretty straight-forward — taking common precautions for the virus and ending police brutality toward minorities — has become controversial.

But the reality is the events that have been protested still happen.

Changes have been made around the country, as several cities have announced major changes to their police departments and policing methods, but the fight for justice continues. And, as it does, coaches — from backgrounds as diverse as the kids they coach — have been both listening to and educating local young athletes.

Kankakee boys basketball coach Chris Pickett, an African American himself, has routinely worked with kids he coaches on the court and in the classroom on how to handle interactions with law enforcement. As recent news has shown, those lessons are as relevant now as they’ve ever been in about a quarter-century of coaching and teaching.

“When you get caught up in a situation in the heat of the moment, sometimes what you’ve been taught gets thrown out of the window, and that’s on both sides,” Pickett said. “It’s an unfortunate thing, but it’s something we have to continue to approach, teach and coach so that they can improve on it.”

Prior to his arrival at Kankakee Community College, Brian Hernandez starred at Orr Academy, a school that’s in the same Chicago Public Schools system as Vocational, Pickett’s former place of employment. And like Pickett, he has seen issues arise with police and members of the community. But that hasn’t so much been the case since he moved down Interstate 57.

“One of the main differences is how many police are in Chicago compared to Kankakee,” Hernandez said. “There are a lot of police in Chicago, and I hear sirens every day here. As for Kankakee, I don’t hear them as much or see them as much as I do here in Chicago.”

One of Hernandez’s coaches at KCC, Devin Johnson, who also runs the local AAU program All Love Basketball, has worked up close with young people who have been exposed to unimaginable situations on some of his recruiting trips, while also experiencing life from his own African American perspective. Those situations could arise from law enforcement and fellow citizens alike.

“Some of our kids at the college are from Chicago, and they’re true inner-city kids,” Johnson said. “If it’s not violence in the neighborhood, most of these guys are minorities trying to do things the right way, but as we’ve seen, it doesn’t always matter.

“Perception and fear can change things in a heartbeat. I’ve always worried so much about those kids a ton.”

In the same fashion that police activity isn’t as rampant locally as it is nationally, the tension between police and protesters has also been scaled back. Bishop McNamara boys basketball coach Adrian Provost has seen that first-hand as a Bradley police officer.

The area may not see as many issues with racial discrimination in law enforcement as bigger areas, but that doesn’t mean the Kankakee River valley is totally immune to it.

Owen Jackson, who played for Provost at Bishop McNamara, as well as football and baseball before his graduation in May, said he, himself, has been the subject of police discrimination, an experience he described as “scary.”

“For me to think about how much that is happening, not only in our community but in the world, it honestly makes it even more scary,” Jackson said. “People out there are getting pulled over like how I did, but it’s way worse because it ends up in someone hurt.

“Just thinking about how scared people are of police officers just because of what they hear or see on TV and social media is not OK,” he added. “Kids are scared of the people that are supposed to protect them; and yes, not all cops are bad, but the media shows (what can happen).”

The importance of diversity

Avery Jackson, Owen’s sister, is getting ready for her junior year at Kankakee, a place she said has diversity that allows her and her peers to open themselves up to people of all different makeups. She said that seeing protests go smoothly has helped her become more comfortable in finding her voice locally in the Black Lives Matter movement.

“It made me really happy when I saw everything going on,” Avery said. “What really made me happy was the peaceful protesting — no lootings, not destroying things, it was peaceful.

“That’s what made me happy and want to be a part of it. It makes me want to be in my community more and be a leader.”

Owen said his experience at McNamara was ripe with diversity as well, and that diversity is a pivotal factor in keeping the momentum for change.

“Mac is still very diverse, and diversity is a big part of all of this,” he said. “With being in a school that’s not so big and has many different backgrounds, you get to learn and see what everyone comes from and get to know everyone there.

“I’ve learned so much from going to Mac because you get to see what other people are coming from instead of just judging them off or their skin color or how they look.”

While the latest wave of protests has been the biggest under the Black Lives Matter movement, there still is a long way to go. And there still are people who don’t understand what exactly is being protested.

Pickett said he believes some of the recent miscommunication stemmed from Colin Kaepernick leading a charge to kneel during the national anthem at NFL games.

“There’s a big misconception that he was disrespecting the American flag and Armed Forces, but he wasn’t,” Pickett said. “It had zero to do with the flag and had everything to do with bringing awareness to what has happened to America, specifically urban areas, in regards to police brutality.

“People are proud to be here; African Americans are proud to be in this country and people respect the flag and what it stands for,” he added. “But people do not feel as though we should walk around in our existence and be considered less, for our voices to not be heard.”

Johnson said another area of misconception has been with the Black Lives Matter name.

“It is Black Lives Matter, and some people will say All Lives Matter, but the point with that and what people need to understand is that your life is going to matter a lot more when black lives matter as well.”

As voices are beginning to be heard, Kamar Whitaker, a junior for Pickett’s Kays, had a clear idea of that message.

“I love seeing all races coming together to stand for all,” Whitaker said. “We are all humans, no matter what skin color we are.”

Hernandez, who hopes for the next generation of minorities to have it better, hopes to see progress continue.

“We need to fight until we are heard and something is done,” he said. “If not, the world will remain the same and this can’t happen because when I’m older, I don’t want my kids to go through any of the things I’ve been through.”

Provost said that progress starts in individual households, raising children differently and more responsibly in an attempt to eradicate racist behavior. He and his wife, Yvonne, attempt to do that at every corner in their own household, as well as the community at large.

“We will do whatever we can to support youth in our community; not to be cliche, but they’re the future of our community,” Provost said. “We have two (kids) and if we can’t teach them how to be productive members of the community and support the community, things like the George Floyd incident will continue to happen.

“If we can help young men become great servants of their community, great husbands, great fathers, we want to do that and that’s beneficial to their communities, wherever they end up.”

A major factor in the movement’s recent growth has been the inclusion of different groups of people joining to spread the message. As both a coach and a father, that is what Johnson, like Pickett, Provost and many others, are proud to see.

“It is so reassuring to see this young generation of people stepping outside, risking their lives and protesting,” Johnson said. “To see kids out, see families out, it’s not a black thing, this is a people thing. And seeing people out protesting from different backgrounds gives you a ton of hope.

“I hope the momentum keeps going and it paves a better way for our kids.”

Local coaches and student-athletes discuss the roles of coaches on their players away from sports in the first of a two-part series.