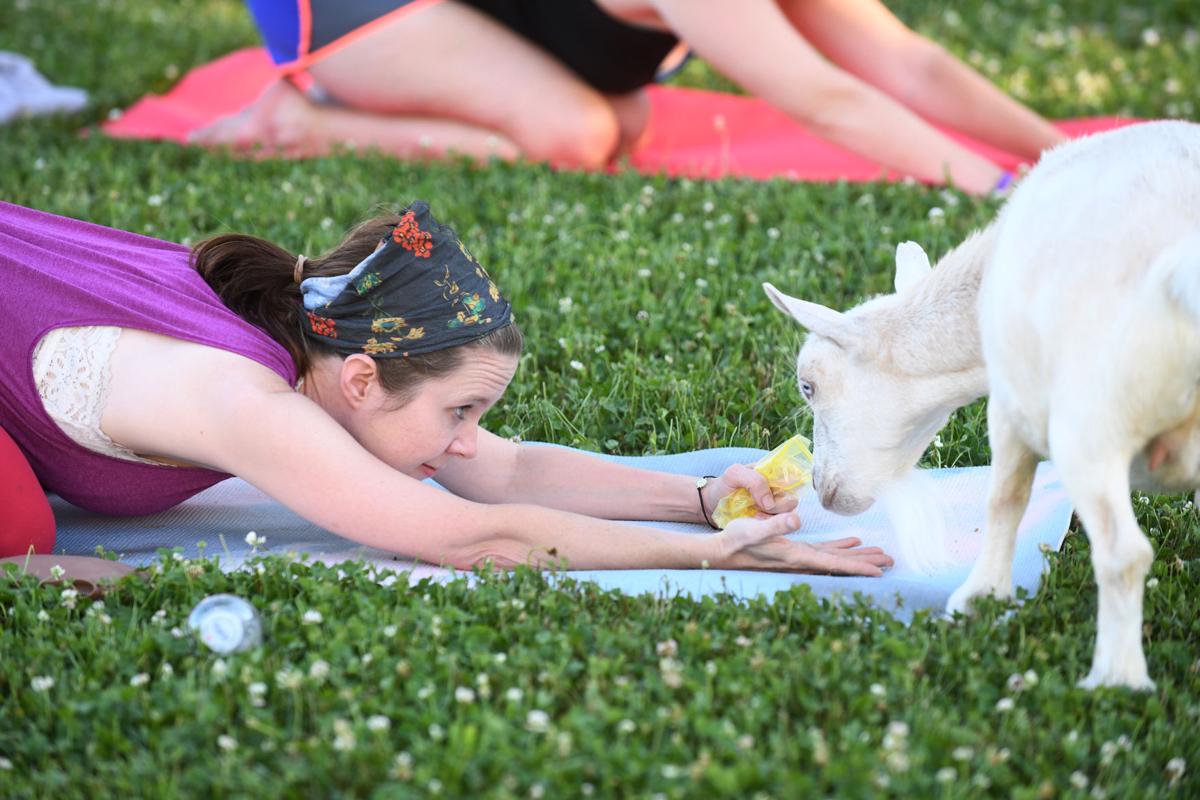 Melissa Daniels, of Bradley, holds food pellets out for female goat Neelah on Friday during a goat yoga event at Haefs Homestead in Bonfield. Like dogs, the goats will approach people excitedly looking for treats. 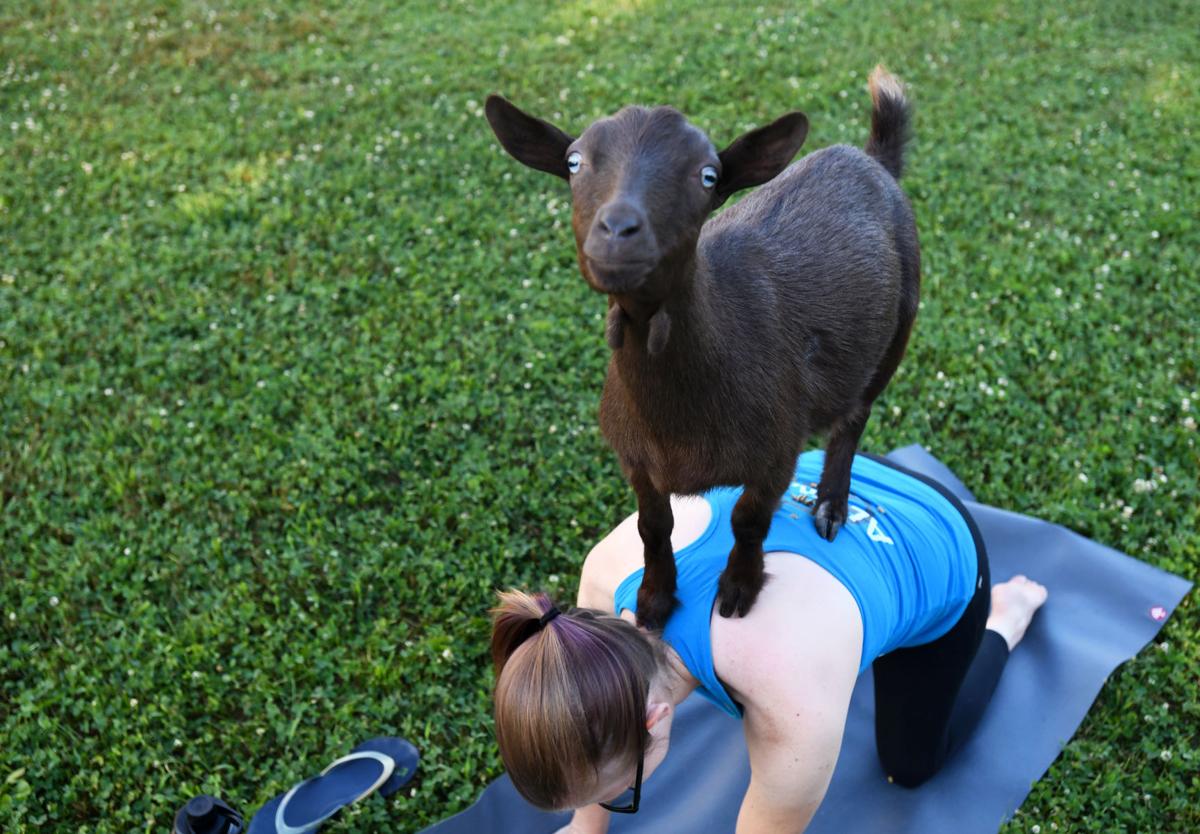 Bleep stands atop Chicago resident Lora Kennedy on Friday. Because goats are natural climbers, they will jump onto people’s backs when doing certain yoga poses. 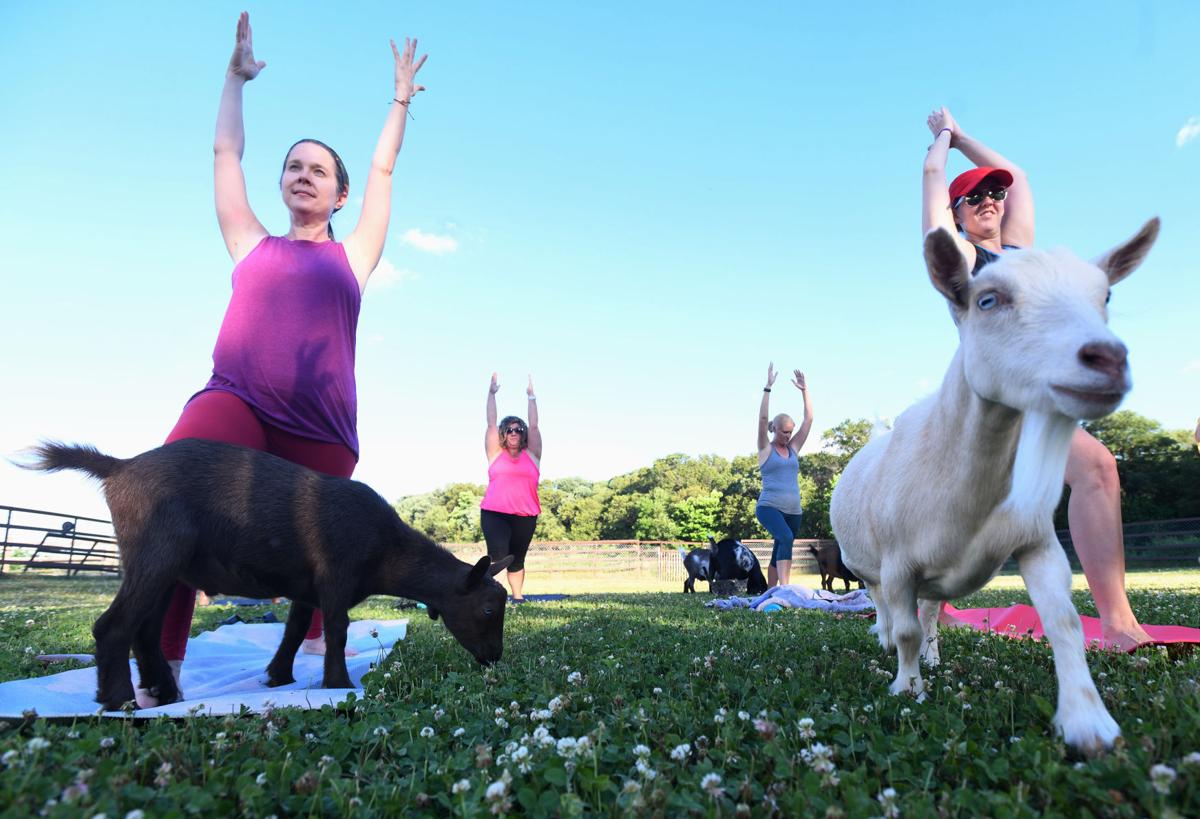 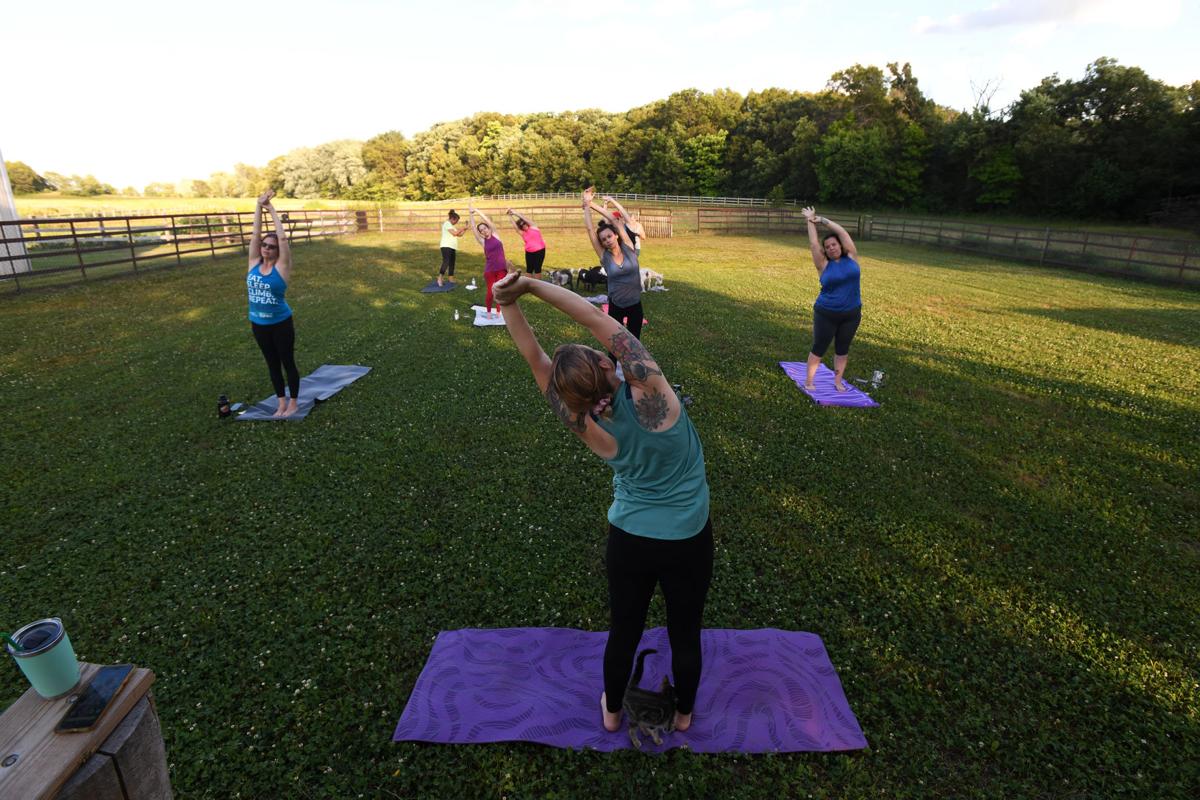 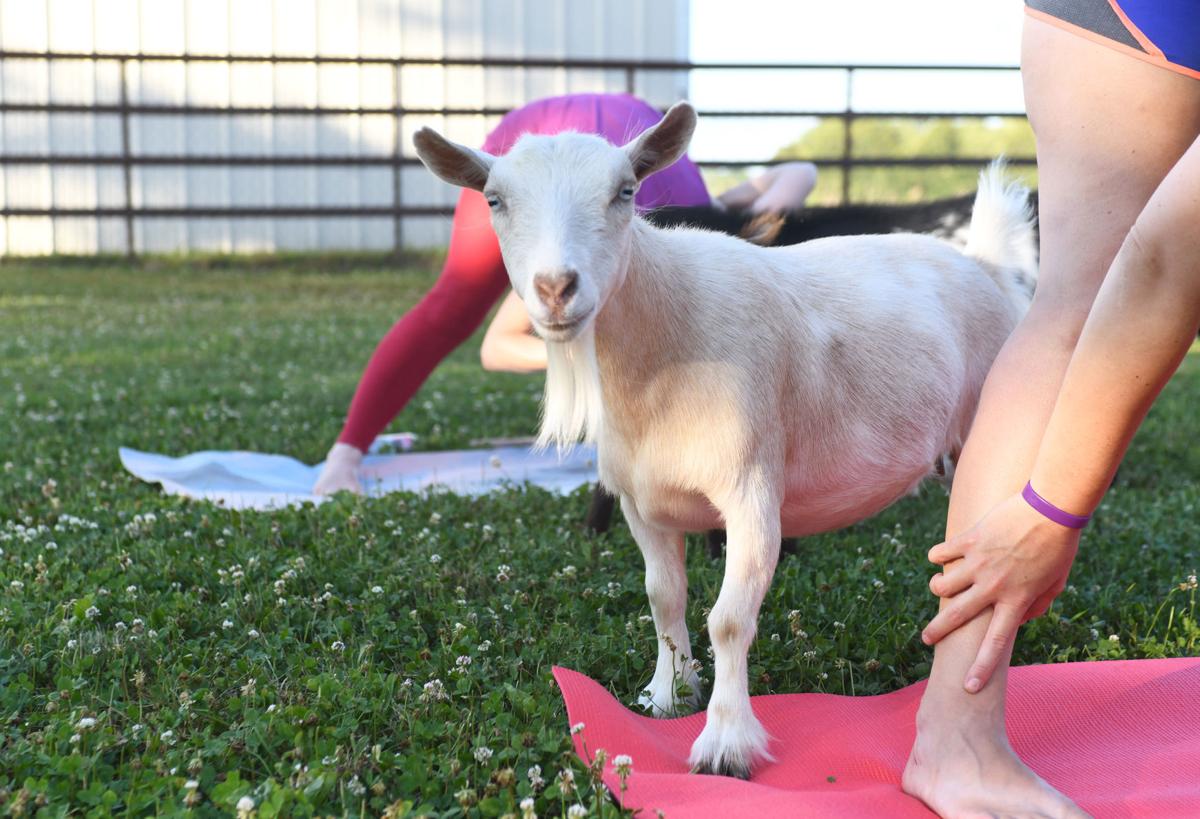 Female goat Neelah wanders among a yoga class on Friday during a goat yoga event at Haefs Homestead in Bonfield.

Melissa Daniels, of Bradley, holds food pellets out for female goat Neelah on Friday during a goat yoga event at Haefs Homestead in Bonfield. Like dogs, the goats will approach people excitedly looking for treats.

Bleep stands atop Chicago resident Lora Kennedy on Friday. Because goats are natural climbers, they will jump onto people’s backs when doing certain yoga poses.

Female goat Neelah wanders among a yoga class on Friday during a goat yoga event at Haefs Homestead in Bonfield.

BONFIELD — What could be more relaxing than stretching out for some yoga poses while breathing in fresh country air and taking in the scenery? Try doing it with tiny hooves hopping on your back.

Haefs Homestead in Bonfield has been drawing yoga enthusiasts and animal lovers alike to try a different kind of workout known as “goat yoga.”

Participants can join a group session with a professional yoga instructor who guides them through different poses in a pasture where six small goats venture out of the barn to greet them. Bags of animal crackers and grain are provided to entice the goats to interact with people.

“Goats are like dogs,” Haefs said. “They have their own personality; they follow you around, and they just want to make you happy.”

Like dogs, the goats will approach people excitedly looking for treats. And because goats are natural climbers, they will also jump onto people’s backs when doing certain yoga poses.

The smaller goats are about 15 to 20 pounds, and the largest any of them will grow to be is about 70 pounds, Haefs said.

Haefs said goat yoga is about being one with nature and forgetting your problems for a while. Most participants cannot help but laugh at the goats’ silly antics, she added.

“You cannot leave here without a smile on your face,” she said. “I have a corporate job, so when I have a really crappy day, I just come hang out with these goats, and I thought, ‘Why not share that with other people?’”

Haefs said she has always wanted to live in the country and own goats. She previously lived in Herscher when her sister, a realtor, called her two years ago about the property in Bonfield.

Haefs got the idea to offer goat yoga on her farm after watching YouTube videos with her daughter. She said it has felt good to provide a safe outdoor activity people can do while social distancing during the pandemic.

“You can be out in the open and you can literally forget about all the craziness that’s going on,” Haefs said. “Plus, if you’re a parent that is with their child all day long, this is a really good escape.”

Jeanna Vent Fodor, of Bradley, is one of three yoga instructors who facilitate goat yoga at Haefs Homestead. A newly certified yoga instructor, she taught her first goat yoga class on Friday.

“I love to be outside,” she said. “Any yoga outside I am down for. I’m up for the challenge.”

Vent Fodor said participants do not have to be yoga experts to try goat yoga; poses can be modified for any ability level.

“This is a great way to start,” she said. “If you come out here as an animal lover and want to be around goats, there is no pressure. You can do what you can do.”

Kristina Decker, of Bourbonnais, had only done yoga a couple of times before trying goat yoga on Friday. She said she enjoyed the peaceful environment as well as the surprising energy of the goats.

“They’re goofy and kind of spontaneous,” Decker said. “I loved how when she opened the doors, they were so excited to see people in the field, they came charging.”

Melissa Daniels, who attended goat yoga Friday with a group of Bradley Elementary School District 61 teachers, said it was nice to reconnect with nature and her coworkers during this stressful time.

“I feel like in today’s uncertain times, being grounded and being out in nature is a really good coping strategy,” Daniels said. “When I’m at peace, I can bring that peace to my family and my students and the community.”

Daniels said she has practiced yoga for many years and often uses it to provide speech therapy to her students.

“It’s great for speech therapy because it addresses respiration, which is the backbone of speech,” she said. “Most people with speech disorders have sensory disorders or anxiety. Yoga relieves anxiety.”

Amy Thompson, also a Bradley Elementary teacher, said goat yoga was unusual, different and exactly what she hoped it would be.

“We weren’t sure if it was going to be crazy, hilarious, or relaxing,” Thompson said. “It was all of the above.”