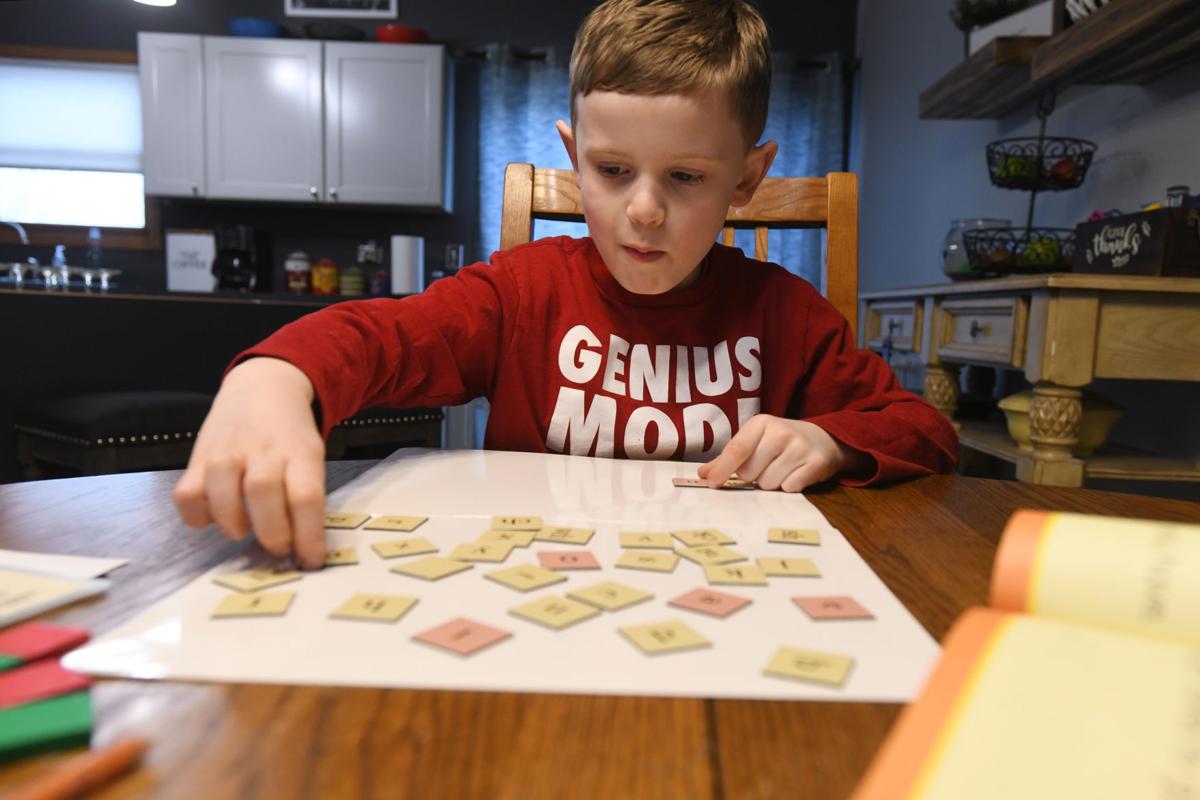 Colin Bramer, 7, of Bourbonnais, works on a reading exercise recently at home. Diagnosed with dyslexia in February, Colin’s mother, Kathy, pulled him from first grade at St. George Elementary School in mid-February after falling into the bottom 1 percent of students nationwide in reading ability. 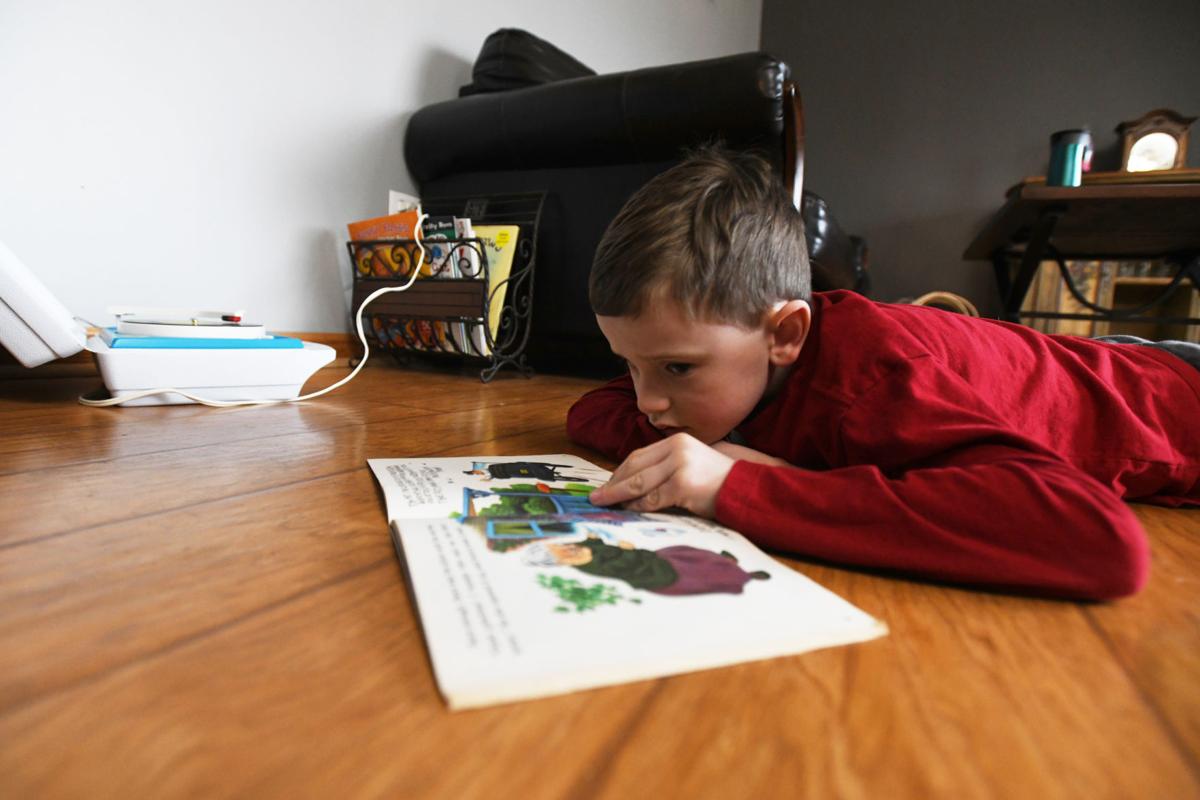 Colin Bramer, 7, of Bourbonnais, follows along with an audio book player recently at home. Diagnosed with dyslexia about a month ago, Colin’s mother, Kathy, pulled him from first grade at St. George Elementary School in mid-February after falling into the bottom 1 percent of students nationwide in reading ability. “He loved school in kindergarten, but in first grade everything changed along with the curriculum,” Kathy said. 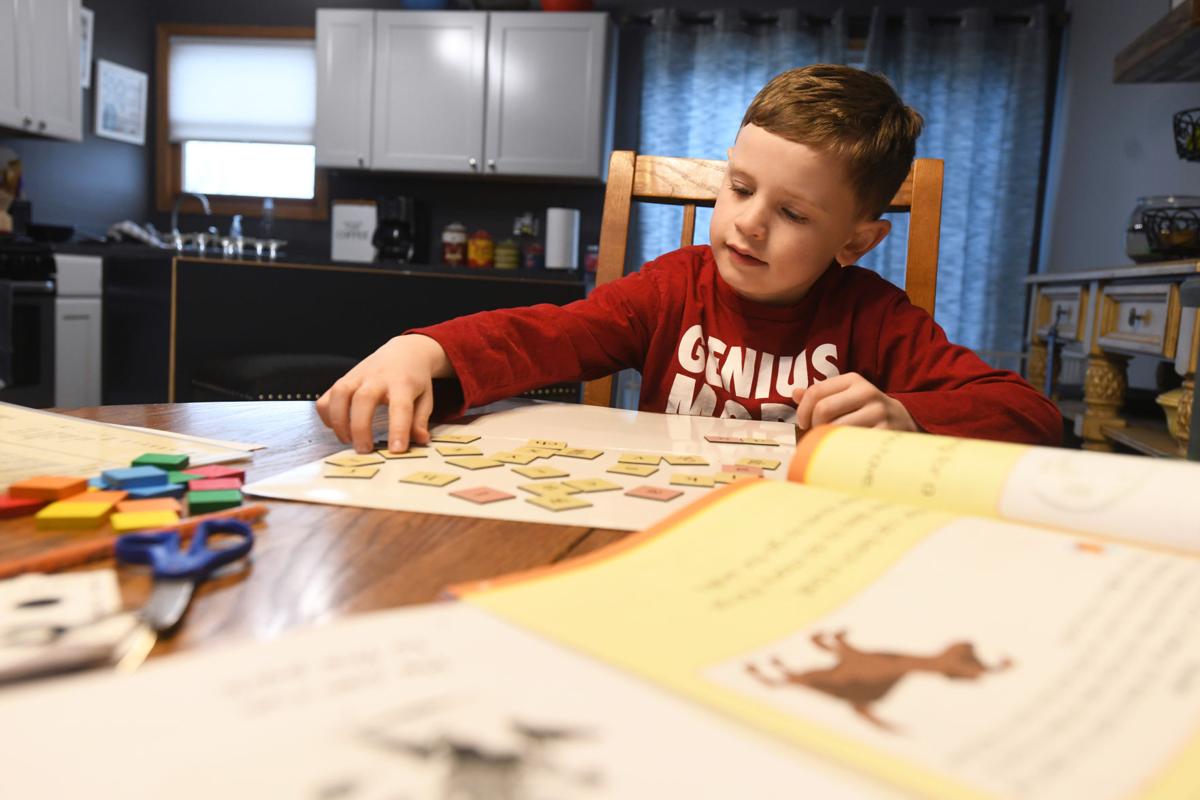 Colin Bramer, 7, of Bourbonnais, works on a reading exercise recently at home. . 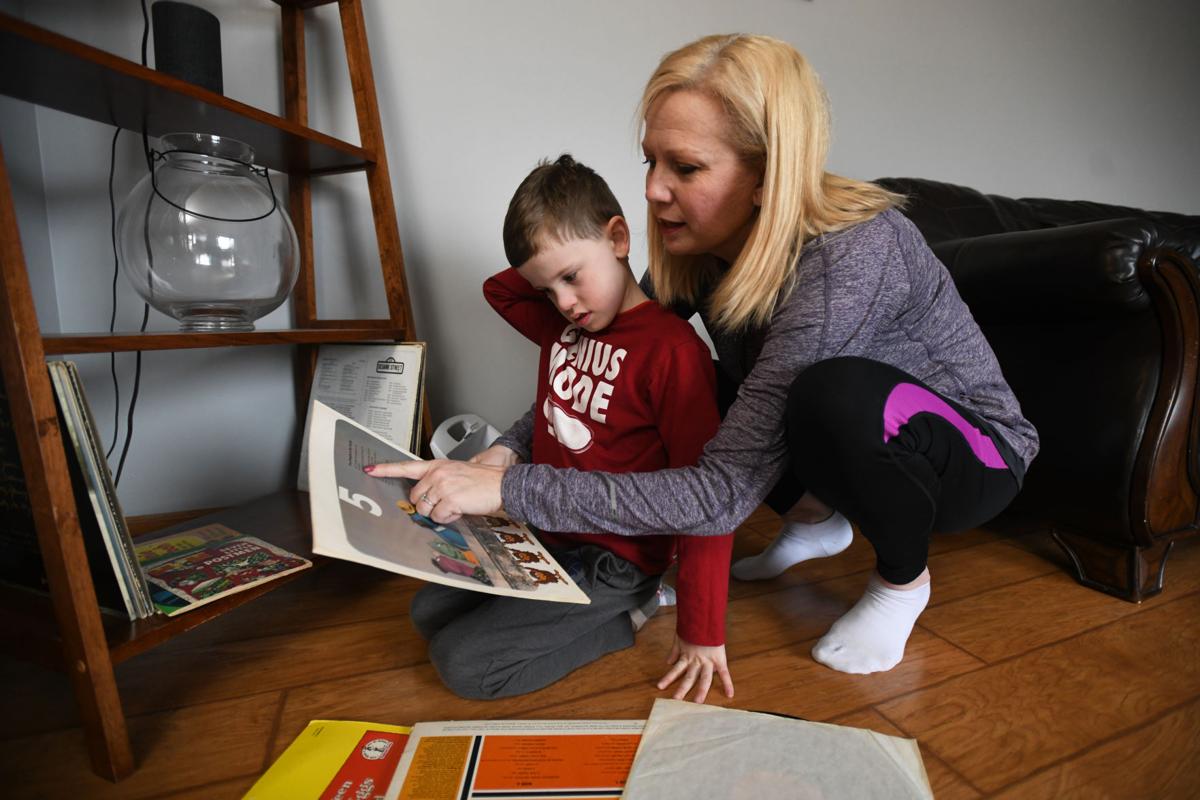 Colin Bramer, 7, follows along to song lyrics with his mother, Kathy, both of Bourbonnais, recently at their home. “We’re lucky to have access to the resources we do,” Kathy said. “I would hate to see this happen to another child that might not have that access.”

Colin Bramer, 7, of Bourbonnais, works on a reading exercise recently at home. Diagnosed with dyslexia in February, Colin’s mother, Kathy, pulled him from first grade at St. George Elementary School in mid-February after falling into the bottom 1 percent of students nationwide in reading ability.

Colin Bramer, 7, of Bourbonnais, works on a reading exercise recently at home. .

BOURBONNAIS — School was in session on a March day, but 7-year-old Colin Bramer stayed home.

He was not sick. He was not skipping class. Rather, his mother, Kathy Bramer, was helping him with a reading exercise at the kitchen table.

If she had her druthers, Colin still would attend St. George Elementary School. She calls herself a fan of public education.

But Bramer said she could no longer stand by while her son was falling further behind in reading. So, she pulled Colin from the school in mid-February.

She said Colin, a first-grader, was at the bottom 1 percent of students nationwide in his reading ability. Now, she is teaching Colin. While it’s only been a few weeks, she feels she is making progress. 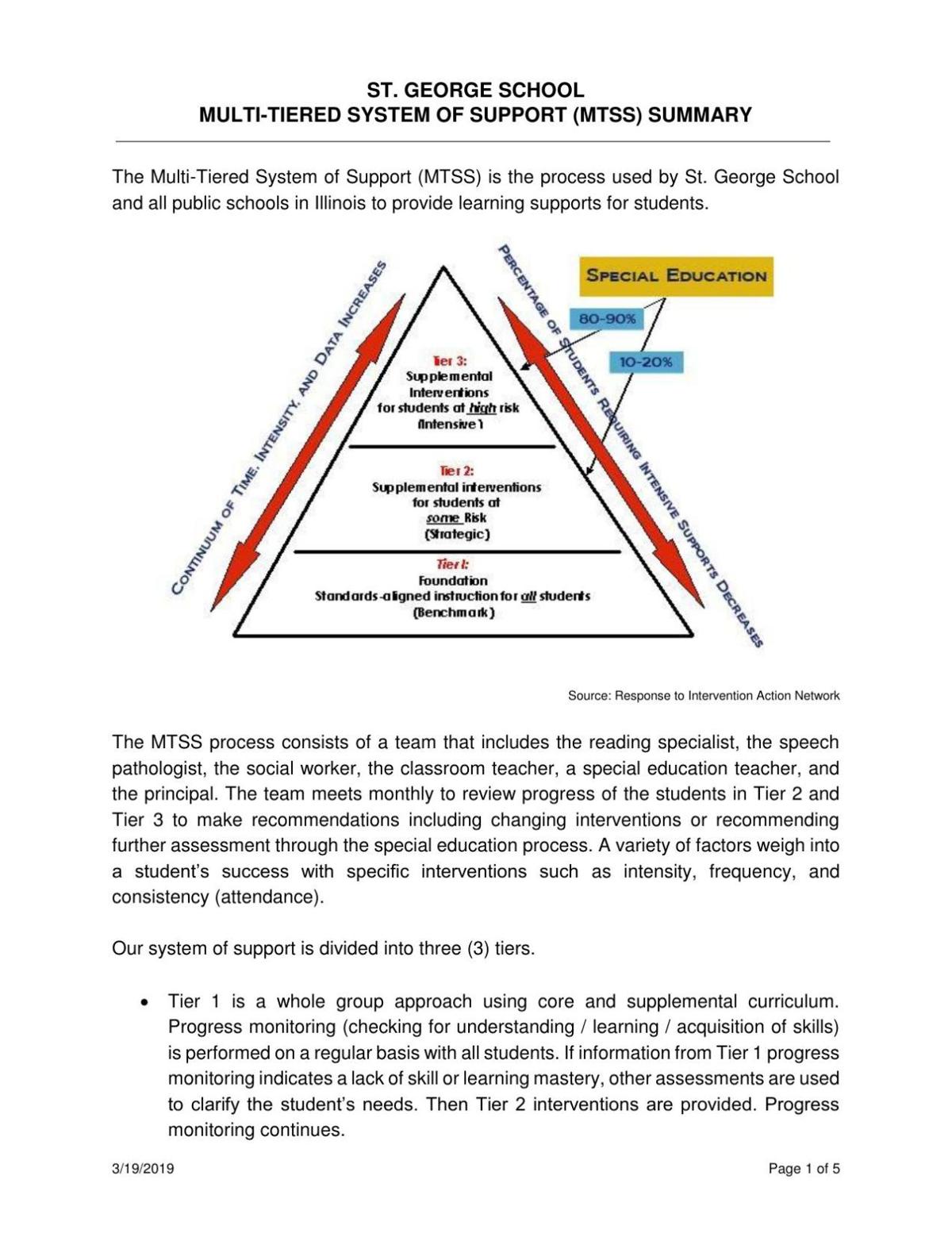 The St. George district says it follows the same “multitiered” system of supporting students with difficulties as all schools do in Illinois. It involves a team of educators and specialists and provides special help to students falling behind, according to the district.

About a month into Colin’s first-grade year, Bramer said she emailed the teacher. The teacher replied asking whether the mother had been receiving her emails.

As it turned out, the teacher had been sending Bramer messages that Colin was “hiding under the table, crying and not participating.”

But the messages were going into Bramer’s spam folder.

“He was in a classroom where he was completely lost,” Bramer said. “I observed the class one day. There was a complete disconnect.”

Bramer and her husband, Ben, hired a neuropsychologist, who tested Colin. The neuropsychologist listed dyslexia as a “diagnostic impression” in a report shortly after the boy was pulled from St. George. It is a learning disorder involving difficulty in reading because of problems in identifying speech sounds and how they relate to letters and words, according to the Mayo Clinic.

The specialist found that while Colin’s intelligence was considerably higher than normal, his reading ability was far lower. The neuropsychologist’s report said Colin is a “delightful boy” who has interests that will help him learn and grow, advising that emphasis should be placed on the best way to address Colin’s current needs while taking advantage of his assets.

“Given that he will be at a new school, it will be a fresh start, hopefully, with better supports in place and will allow him to learn the material that he should have learned this year with more support and a higher likelihood for success,” Hauser said in an email.

“She is a very good woman, but she has a very, very limited amount of time. She has lots of kids she sees,” Bramer said.

Bramer said a first-grader should know how to read at least 30 words by late September. Her son knew none, which alarmed her.

“At that point, I was on top of things,” she said.

By December, Colin should have been able to read 60 or 70 words, but he knew just a handful, Bramer said.

Bramer said she did not understand why Colin was so far behind. But she said she believes it was because St. George is ill-equipped to handle students with dyslexia. No one is trained in programs that help students with such learning disorders, Bramer said.

Illinois, Bramer said, is behind other states in dealing with dyslexia. In Indiana, for instance, state law requires all public and charter schools to screen kindergarten, first- and second-grade students for the characteristics of dyslexia.

When Bramer showed up at a parent-teacher conference on Valentine’s Day, school administrators were on hand. By her account, Bramer said she could not convince them to give her son more than a half hour of one-on-one or three-on-one time each day, so he could catch up to other students.

“In my heart of hearts, I knew there was something wrong,” she said.

Afterward, she pulled Colin from the school and started teaching him at home. She said St. George has “amazing” teachers, but she said she lost confidence in the administration.

She said she has voted for school referendums in the past and said in an interview before the April 2 election that she planned to go to the polls that day to support a referendum for an expansion of the school, which officials said would not cause a tax increase. Three-fourths of voters backed the measure.

“We had a bad experience with St. George, but we’re not public school haters. We’re not public teacher haters,” Bramer said. “We can make this better.”

She said she would like to get her son back into school, perhaps a private Montessori school in the suburbs, meaning the family would have to move.

“He could never thrive in a public school right now,” she said.

But Bramer held out hope he would eventually.

“Once he gets the foundation, there’s no reason he can’t go back in a public school system,” she said. “These first three years of school are vital.”

The school district cannot speak specifically about a particular student; it is barred from doing so by a federal privacy law.

Superintendent Helen Boehrnsen said the school closely tracks the progress of its students. In the five years she has been superintendent, no one has sought a hearing with the state Board of Education to appeal a St. George decision on a student’s special education situation, the superintendent said.

The district released a six-page document about how it helps students who are struggling to read, which involves a program used statewide. A team of educators that helps them includes a reading specialist, a speech pathologist, a social worker, the classroom teacher, a special education teacher and the principal. This team meets monthly and recommends “interventions” that aim to move students forward, according to the district.

“Dyslexia is a diagnosis,” the district’s document says. “The diagnosis must come from a neuropsychologist, which is not the same as a school psychologist.”

If parents disagree with the team’s decisions, the parent has resources through the state Board of Education, according to the district.

As for the six-page document, Bramer said, “We haven’t seen that before. It would have been nice to have that information. It could have been life-changing. We could have lived within what the document contains.”

Danielle Baran, president of Everyone Reading Illinois, said Illinois schools are supposed to screen students for delays in reading. Teachers tell her group that they need more training on dyslexia, she said.

“There are no specific batteries of tests that need to be given,” she said. “The feedback we get from many teachers is they want accurate information about their students. There is a knowledge gap that requires parents of kids to get private tutoring and private evaluations.”

• Dyslexia is the most common learning disability.

• About 70 to 80 percent of children who are placed in special education for learning disabilities are dyslexic.

• Dyslexia was first described in 1896 by Dr. W. Pringle Morgan in Sussex, England. “Percy F., age 14, has always been a bright and intelligent boy, quick at games, and in no way inferior to others of his age. His great difficulty has been — and is now — his inability to learn to read.”

• The dyslexic brain is actually larger, and typically much more creative, than the average brain.

• The U.S. Department of Health and Human Services estimates that 15 percent of the population has dyslexia.