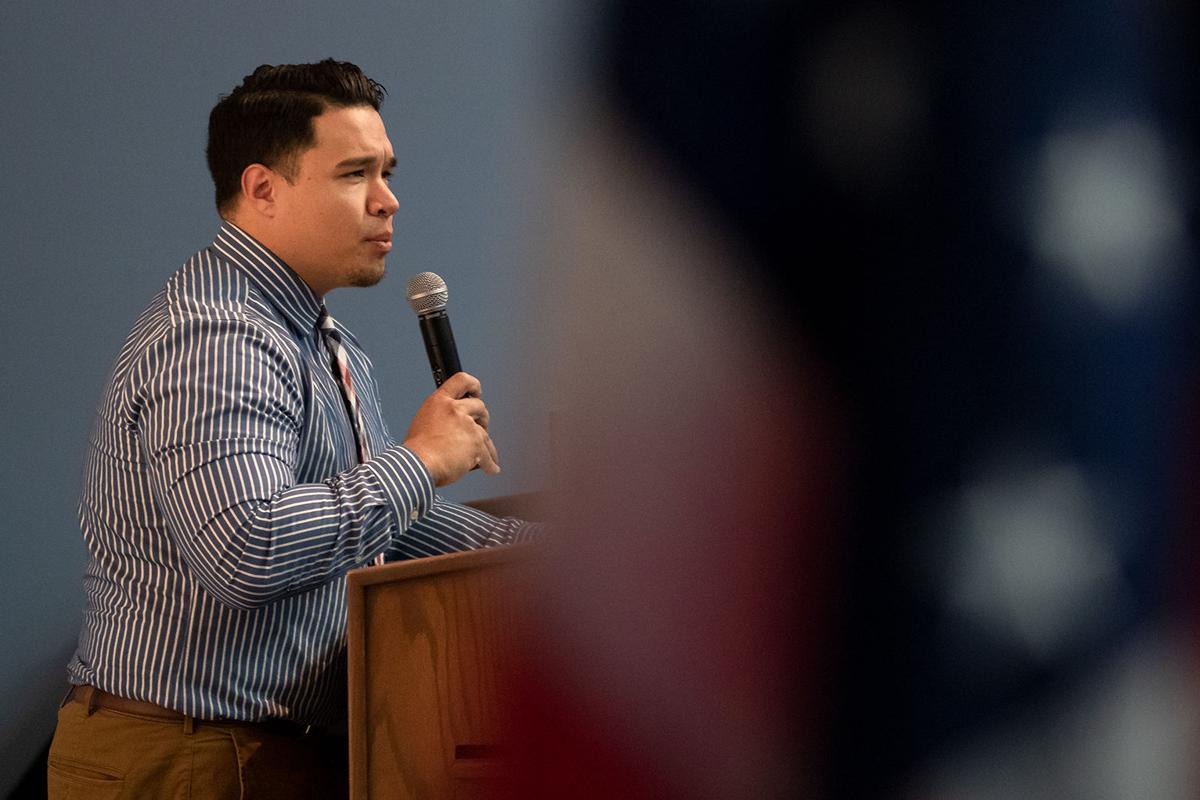 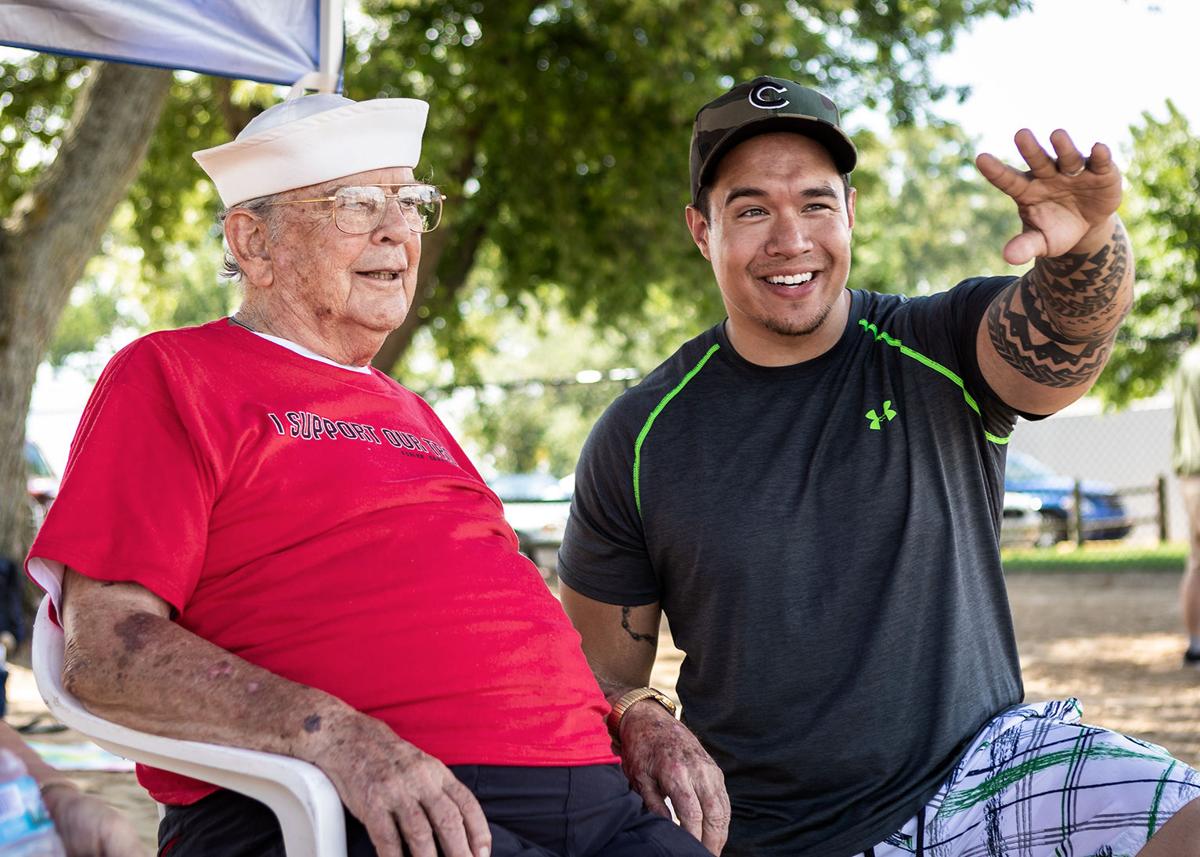 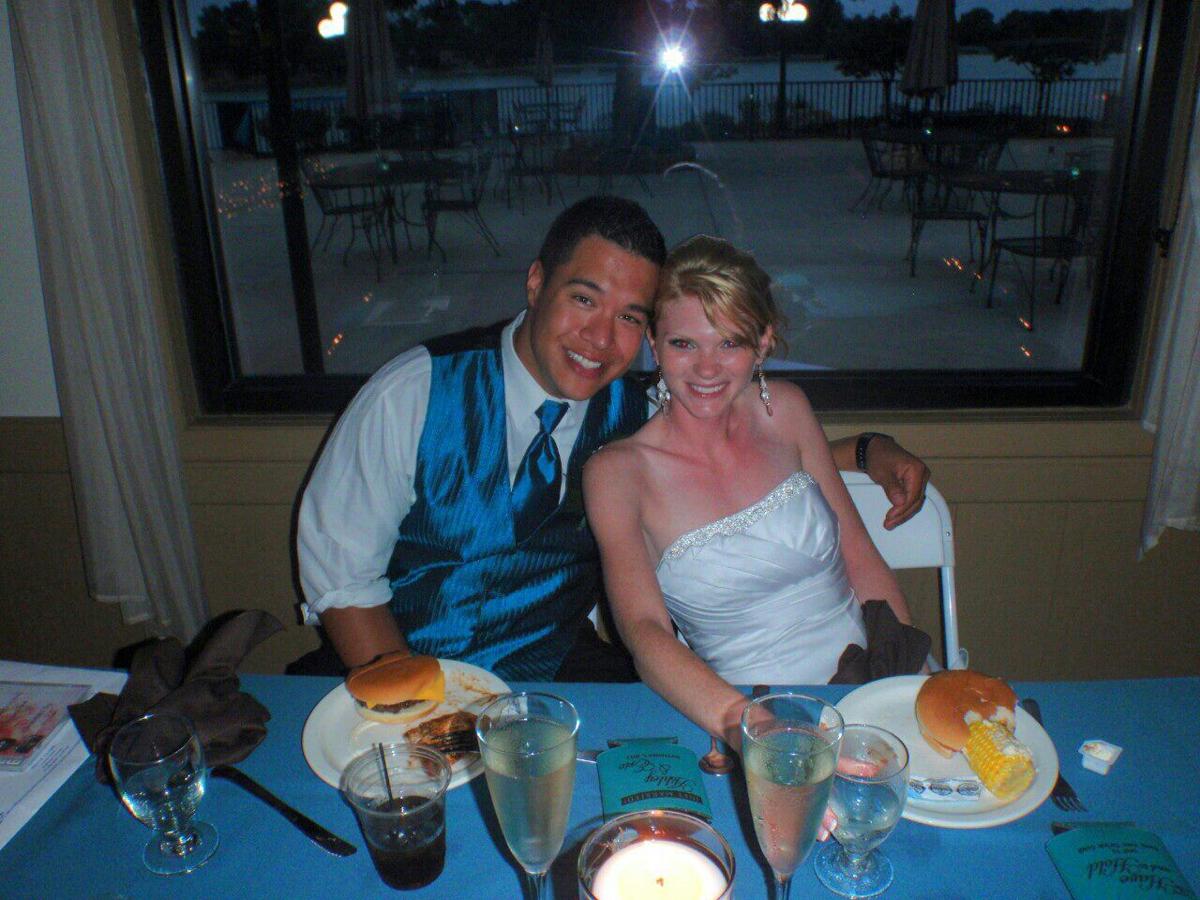 Eric Peterson married his wife, Ashley, during his second deployment. 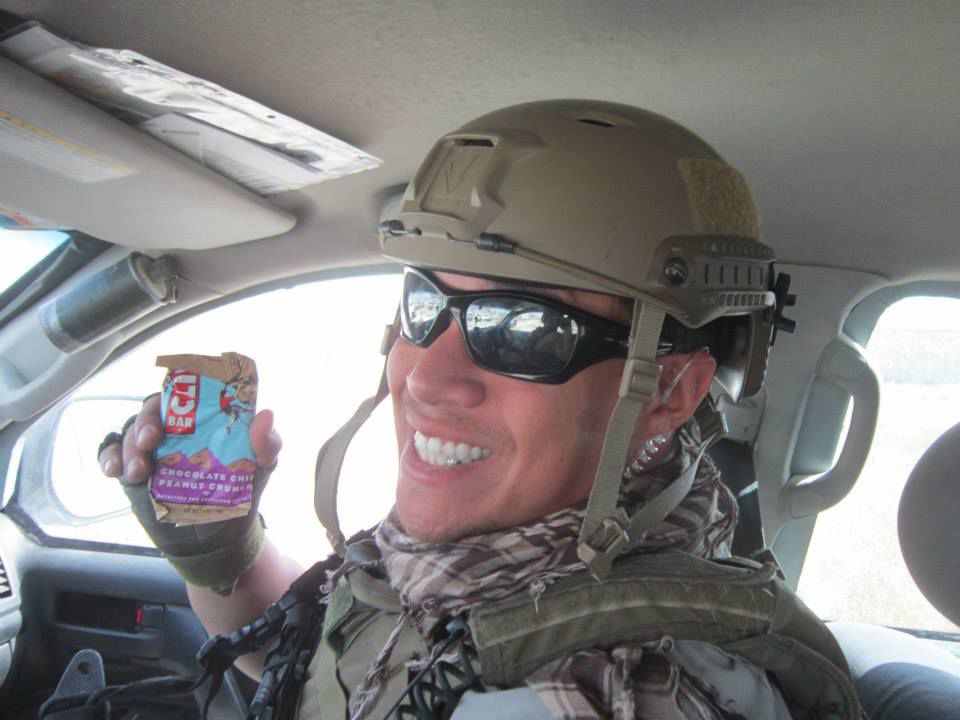 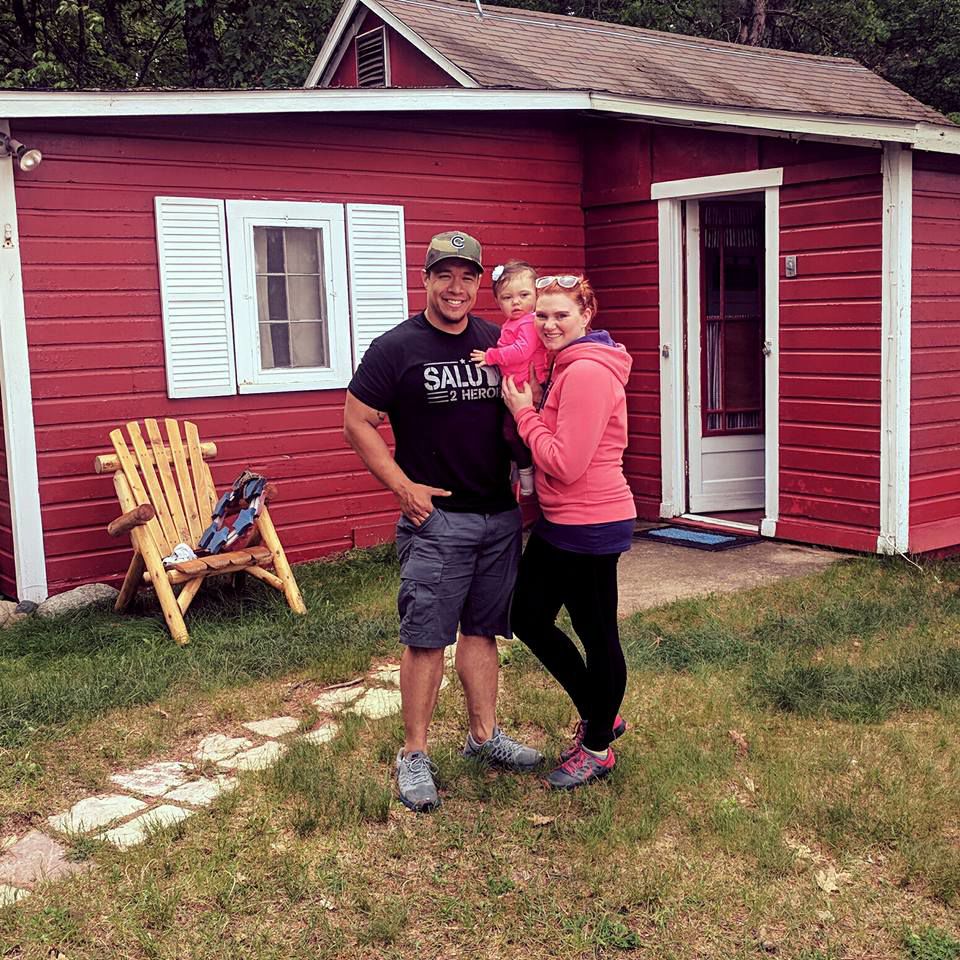 After six tours overseas, Eric Peterson came home to start a family with his wife, Ashley. Their daughter, Lilly, was born on May 25, 2017. 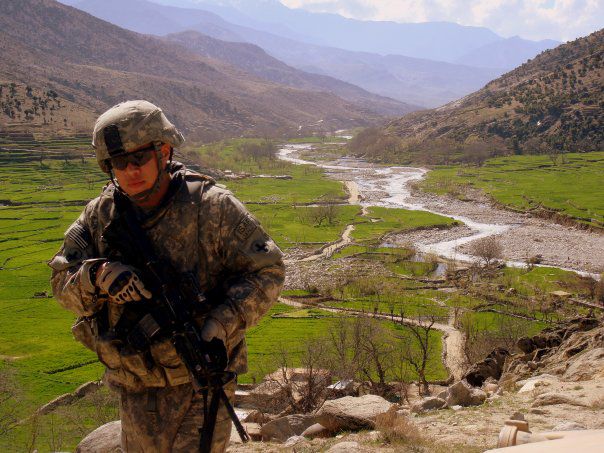 Eric Peterson married his wife, Ashley, during his second deployment.

After six tours overseas, Eric Peterson came home to start a family with his wife, Ashley. Their daughter, Lilly, was born on May 25, 2017.

Eric Peterson scrolled through his Facebook feed when a familiar face stared back at him. His friend John, a veteran he served alongside in Iraq, killed himself.

The memories hit Peterson like a hurricane. He closed his eyes and remembered the jam sessions he and John would have with their broken guitars overseas — the moments that made him feel like he wasn’t fighting a war in Baghdad.

His heart started to race with his emotions. A workout session at a gym couldn’t drown out the pain. He couldn’t stop driving as he tried to get back to his hotel.

“I saw my turn come up, and I just kept driving past it,” Peterson said. “Before I knew it, tears were streaming down my face. I was white-knuckling the steering wheel. I swear I was about to rip it off. I wanted to know why John killed himself. I couldn’t stop asking myself that. I kept telling myself, ‘If only I reached out more, maybe I could have made a difference.’”

Peterson was struggling, too. Six tours in Afghanistan and Iraq made him feel alone after coming home.

The 2005 Herscher High School graduate was 17 years old when he committed to the U.S. Army National Guard, following in the footsteps of his grandfather who was a World War II veteran and uncle who was a Vietnam veteran.

He was 21 years old and engaged to his wife, Ashley, when he served his first combat tour in Afghanistan. He wasn’t the same when he came home.

“He never had the ability to talk about his day when he was overseas,” Ashley said. “When he came home, he wanted to enjoy all the things he missed out on — being 21 and hanging out with friends. He wanted to make up for that lost time.”

To cope, Peterson enrolled at Kankakee Community College and became a paramedic. But he couldn’t escape the soldier mentality. He was depressed. The calamity of life back home made him anxious.

“In transitioning back home, I felt lost and disenfranchised,” Peterson said. “When you are overseas, you have the reassurance of that brotherhood. Over there, I liked to think that the person who liked me the least would still take a bullet for me. I would have done the same for them.

“Here, the person you trust could stab you in the back for some minute gain. That was something I struggled to understand.”

So, Peterson went back to war. He served three more rotations as a medic in Iraq through the State Department. Then, two more with the U.S. Department of Defense in Afghanistan.

He and Ashley got married during his second tour. After his third tour, his uncle, a Vietnam veteran, pulled him aside and told him to stop leaving. That his wife and family needed him. That he needed to find peace.

He fell deeper and deeper into that rabbit hole as he heard about his friends from overseas committing suicide.

“I had the honor of serving and working alongside a lot of incredible people,” Peterson said. “As a medic, I felt responsible for those people. That didn’t stop once I got home.”

After his sixth tour, Ashley gave him an ultimatum. He either had to come home or it was over.

“It was tough on me,” Ashley said. “We were married, and I wanted to have a family. I was in a house by myself. I didn’t have a sisterhood like he had a brotherhood. We were putting blame on each other. He was turning into a person I didn’t recognize. So, I told him, ‘This is it.’”

Peterson chose to quit serving overseas. He worked on more rotation in executive security in the U.S. and then became a private investigator. He traveled the country for work and would occasionally meet up with his military friends.

“It was in that moment that John pulled me out of that rabbit hole,” Peterson said. “They say there are two important days in your life: The day you are born and the day you find out why. That was the day I found out why.”

After John’s death, Peterson quit his job as a private investigator and returned home for good to be with his wife and newborn daughter, Lilly, in Manteno.

He still had the urge to fulfill his duties as a medic of helping fellow veterans. So, he held a veterans town hall meeting in 2017 at the Leo Hassett Center in Manteno.

Then, he started volunteering at the Manteno Veterans Home, where every Sunday he would bring candy bars and beer and talk to veterans about their war experiences.

He built such a strong connection with the veterans that he overdrafted his bank account to provide cash prizes, food and radios to veterans for a bingo night close to Christmas.

“I had to take what little money I had left in savings and transfer it over to make it through the holidays,” Peterson recalled. “I would have done it again because I know how much joy it brings the vets out there.”

But Peterson didn’t have the money to do that. So, he created Project Headspace and Timing, a nonprofit organization that helps veterans transition to home life.

The organization’s name alludes to a headspace and timing gauge, a mechanism that enables soldiers to safely fire a 50-caliber machine gun. Without that gauge, the weapon won’t fire or the round will explode in its chamber.

“You need it just to make sure this big, powerful weapon could function,” Peterson said. “It’s just two pieces of metal, just this tiny little thing. I thought it was a good name for this because these veterans I know personally were extremely efficient overseas. I felt like they need something — like a headspace and timing gauge — to help them be as efficient at home.”

In the past two years, Peterson’s nonprofit has restored 96-year-old World War II veteran Ray Olley’s childhood canoe so he could paddle on Lake Manteno one more time; flown Beau Casanova, an Iraq veteran Peterson served with, to Chicago Bears training camp to meet Khalil Mack; and hosted Heroes, Hogs and Hot Rods, a festival in Manteno to raise money for homeless veterans.

Currently, the nonprofit is helping a Vietnam veteran restore his home and is preparing to send care packages overseas to National Guard soldiers from Charlie Company.

But those are just the small projects.

“He had to come to the realization that he is good enough to stay home,” Ashley said. “Project Headspace was his way of doing what he did overseas but at home. I’m proud that he is doing it.”

After doing some research, Peterson visited a privately funded transitional village for homeless veterans in Racine, Wis. The village consists of 15 tiny homes with a community center. Its goal is to help veterans get back on their feet on the home front.

Peterson wants to form such a village in Kankakee County. The Heroes, Hogs and Hot Rods festival raised $20,000 for that effort.

Since then, Peterson has talked with the Illinois Department of Veterans Affairs and even had a brief conversation with Gov. J.B. Pritzker during Bears training camp.

He has done all that while fulfilling his duties as a husband and father, a full-time employee at CertaPro Painters and a full-time psychology student at Governors State University. Oh, and while getting ready for his second child to arrive in January.

“I drink a lot of caffeine, probably an unhealthy amount,” Peterson said with a laugh. “I have a really good support system with my family and friends. I’m very thankful for my job because they understand all of this.

“It’s about setting realistic expectations. You have to make the time because it’s difficult. A lot of people talk about how people our age aren’t doing enough. I hear those things. I wish I had the time to rebuttal that, but I’m too busy.”

Peterson is set to receive his bachelor’s degree in the spring. After that, he will pursue his master’s degree. Meanwhile, he and his army of volunteers hope to break ground on a privately funded tiny home village in the spring of 2021.

Once that village is ready, he plans on being the transitional facility’s owner and therapist.

“That’s my goal in life. That’s my purpose,” Peterson said. “I am here to help fellow veterans come back home.”

Bearing Through It – Part I

“That’s my goal in life. That’s my purpose.“I am here to help fellow veterans come back home.”

See the rest of Eric Peterson's story in a video at daily-journal.com