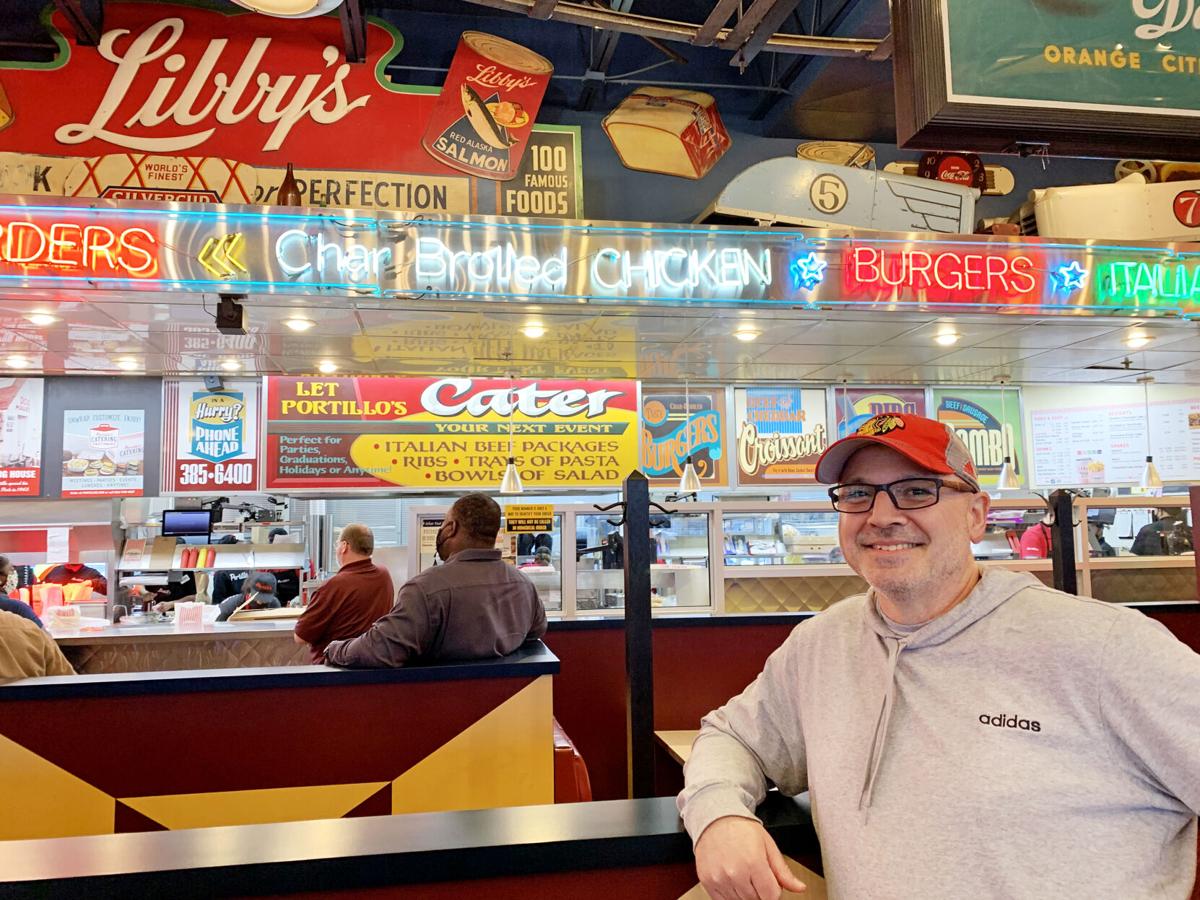 After explaining he had never visited a Portillo’s restaurant, a Daily Journal reader made sure Lee Provost experienced the popular restaurant. 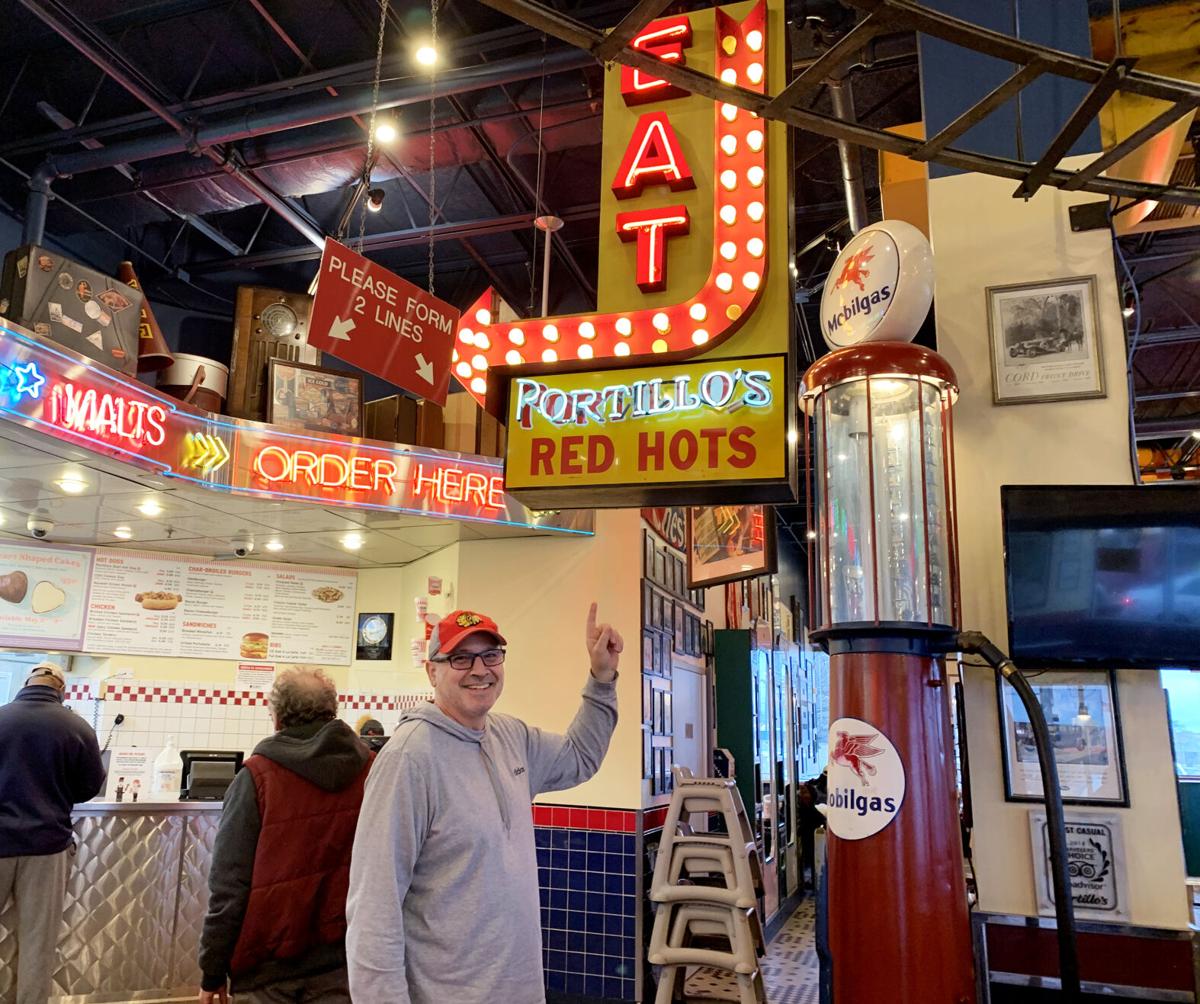 From a country boy to a Portillo’s hamburger customer, the Daily Journal’s Lee Provost finally experienced the pleasures of the popular restaurant.

After explaining he had never visited a Portillo’s restaurant, a Daily Journal reader made sure Lee Provost experienced the popular restaurant.

From a country boy to a Portillo’s hamburger customer, the Daily Journal’s Lee Provost finally experienced the pleasures of the popular restaurant.

It was as if I had broken some sacred social covenant. It was an error which had to be corrected and corrected immediately.

When I wrote in a recent ”Heard On The Street” business column that I had yet to sit down and dine at any Portillo’s Hot Dog location, one of my faithful readers had simply reached his point of no return.

Kankakeean Lance Marczak had read enough. In this day and age, Marczak reasoned, how could anyone have not stepped foot in a Portillo’s? He wasn’t alone. I had responses from readers who stated much the same. Someone was going to correct this great injustice I was committing.

So, on a recent Thursday afternoon, while I was walking my dogs, Marczak, his girlfriend, Sally, and my wife, Michelle, had crafted a plan to get me to Portillo’s.

When I returned to my home, Marczak was waiting. He asked if I had any pressing news matters that I needed to attend to. I informed him I was waiting on some political responses, but was not expecting anything immediately.

I was instructed to grab my jacket and get into his car. The wrong I had committed against the name of the great hamburger, hot dog and Italian beef restaurant was about to be corrected.

How could I have lived these 57 years and not sat down in a Portillo’s? The shame I must have felt. The public ridicule I must have endured.

Behind the wheel, Marczak headed his car north and within 40 minutes or so we were inside a Crestwood Portillo’s.

As we waited our turn to order, Marczak, as those who know him, cannot stand still. He was taking photographs to mark this momentous occasion. He even asked a server if he could purchase a Portillo’s baseball cap for me. We learned the hats are not for sale.

“Order anything. I’m buying,” Marczak said. He and Sally ordered, up next were my wife and I.

Like a kid in a candy store, I scanned the menu. Coming from a family of eight children there is almost nothing I won’t eat. Having grown up with 10 people seated around the kitchen table, you either ate what was served or you didn’t eat.

Of course, knowing Portillo’s earned its fame from its hot dogs and Italian beefs, I order a cheeseburger and fries. Michelle, who also had never stepped foot in a Portillo’s, went with the Italian beef.

The food was placed on our tray within the next several minutes. We were soon seated, eating and exchanging stories and laughs.

The char-broiled burger was good. Michelle gave a thumbs-up to the Italian beef and recommended I order it on our next visit.

We finished the meal with a piece of the famous chocolate cake.

I failed to encourage the staff that they put in a word to management to locate a Portillo’s in Kankakee County. That mistake was mine, but I’m sure they are already aware of the county’s desire.

Marczak wanted to know what I thought. I told him the food was wonderful. I would certainly eat at the restaurant again.

But what I didn’t tell Marczak, was the company Michelle and I had as we ate our food, was what made the visit to Portillo’s fun and worth repeating. Food is the reason we gather around the table, but it’s the family, the friends, which keeps us coming back.

Thank you, Lance and Sally. Let’s do this again.

Speaking of well-established locations, one of the four Boz Hot Dogs locations in Kankakee County has closed.

The Boz at 596 S. Schuyler Ave., just south of downtown Kankakee at the intersection of South Schuyler and East River Street, recently closed. The two other Kankakee locations as well as the Bourbonnais site, will remain open, owner Don Grobner reported to the Journal.

Grobner said he had been operating the location since 1991, but at age 84, he’s starting to slow down and this Kankakee site was the farthest from his Bourbonnais home.

“That’s part of my life,” Grobner said of the store. “I knew eventually I would have to scale back, but I still have the other stores.”

He said Kankakee has been very good to him during these many years.

“I definitely have to cut back. My legs are starting to go bad,” he cracked. “Mother Nature has said to me it’s time to slow down.”

The location has already been sold. Jessie Almr, the owner of the Arak Auto locations in Kankakee and Bourbonnais, has purchased the site. Almr said he has yet to finalize any plans as to how the site will be used.

“I have a couple things going through my mind, but I’ve not yet decided,” he said.

The location’s use will be of keen interest to Kankakee leadership as the property is located directly north of the planned East Riverwalk, the first segment of The Currents of Kankakee riverfront district.

There is one constant about the Kankakee County Chamber of Commerce within the past year and in a word, it is "change."

LoveALatte runs on kindness and caffeine

LoveALatte Coffee was established as a nonprofit pop-up coffee shop in 2018. The organization is a job-training opportunity for young adults with disabilities in Kankakee County.