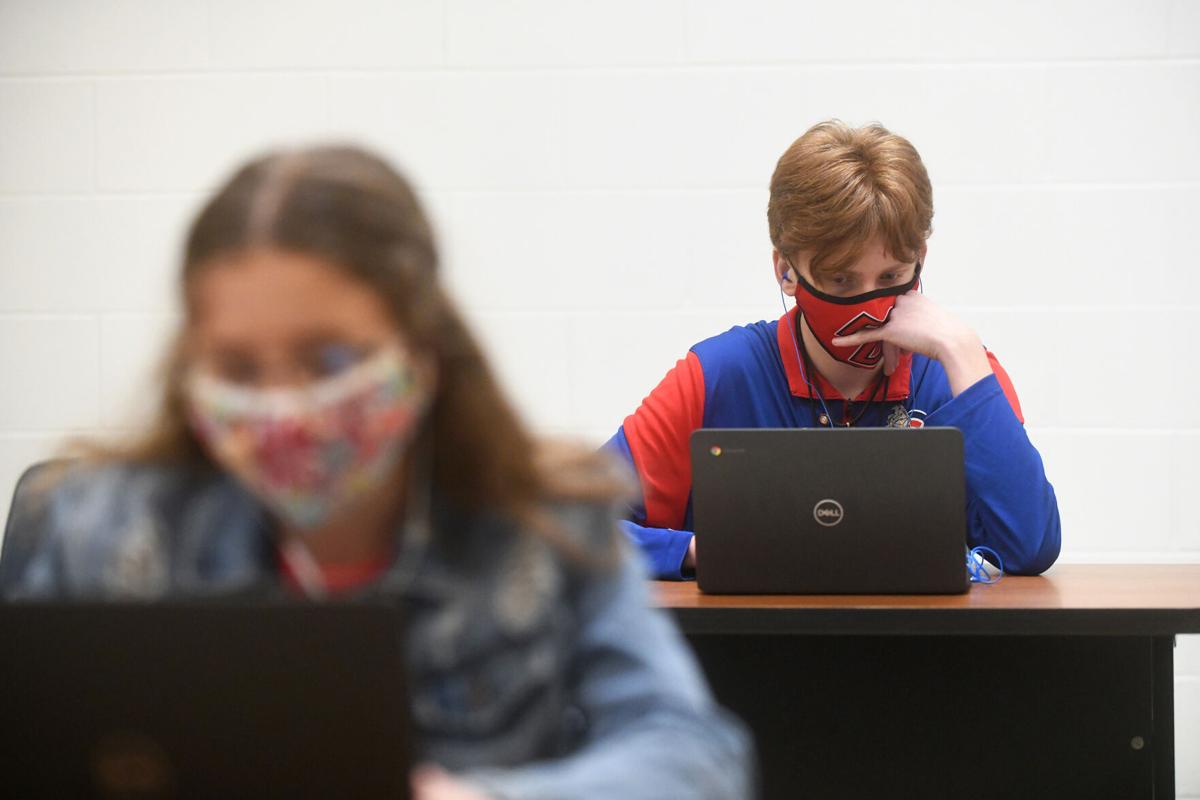 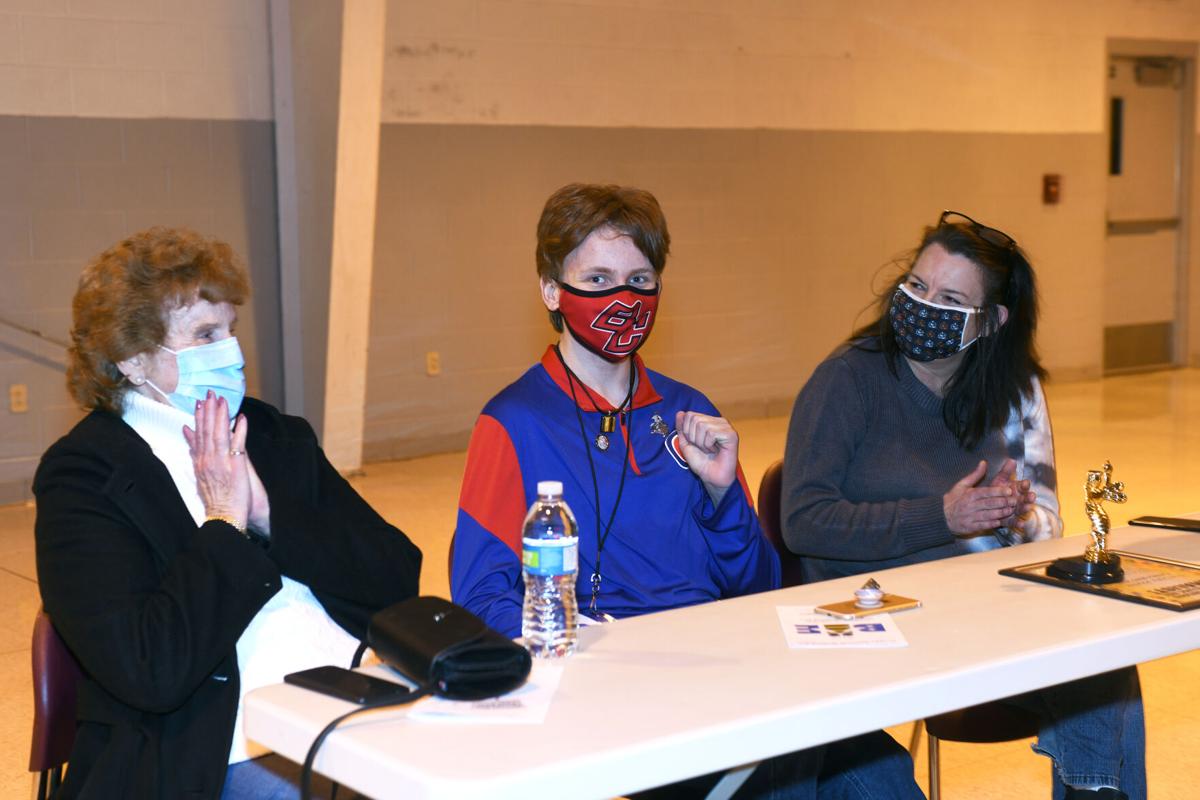 Bradley Central eighth-grader Quinn Meadows does a small fist pump upon finding out he won the 2021 Iroquois-Kankakee Regional Spelling Bee on Thursday night. Meadows spelled 30 of 50 words correct to win his second in three years. 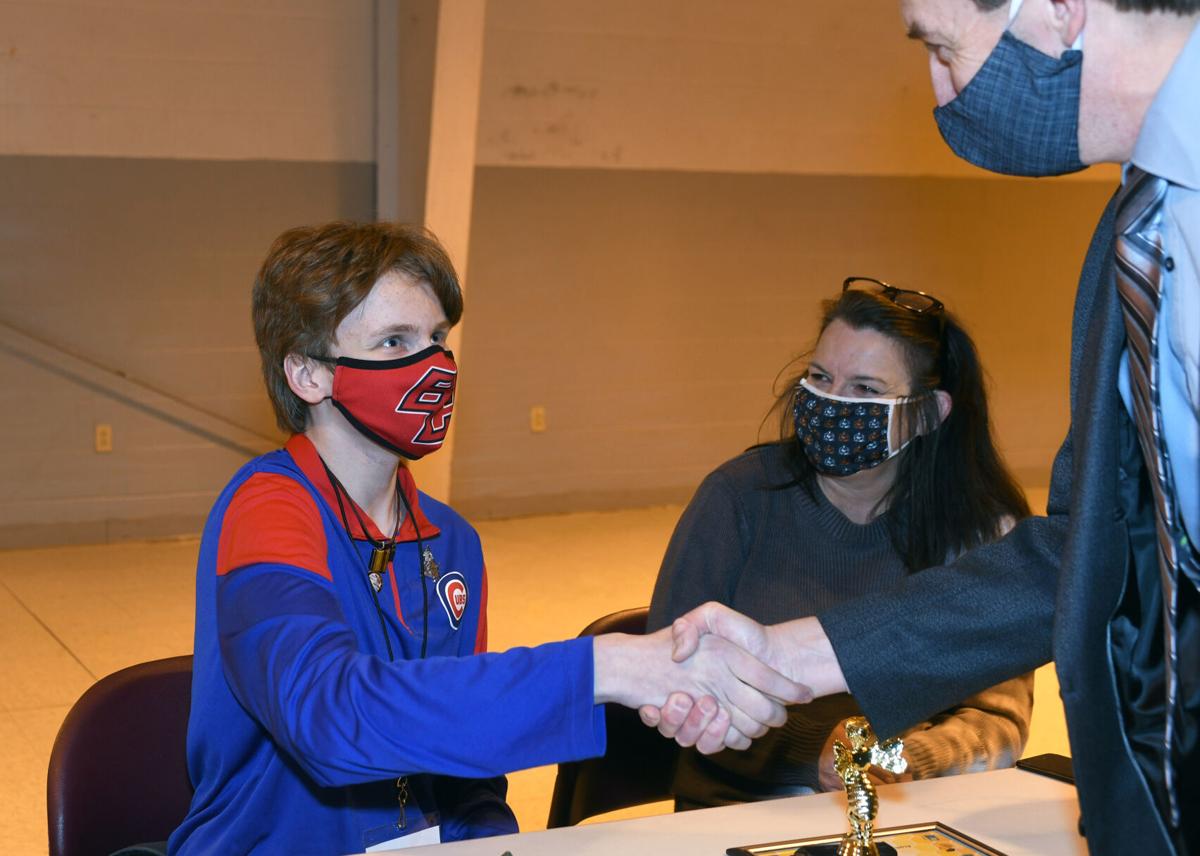 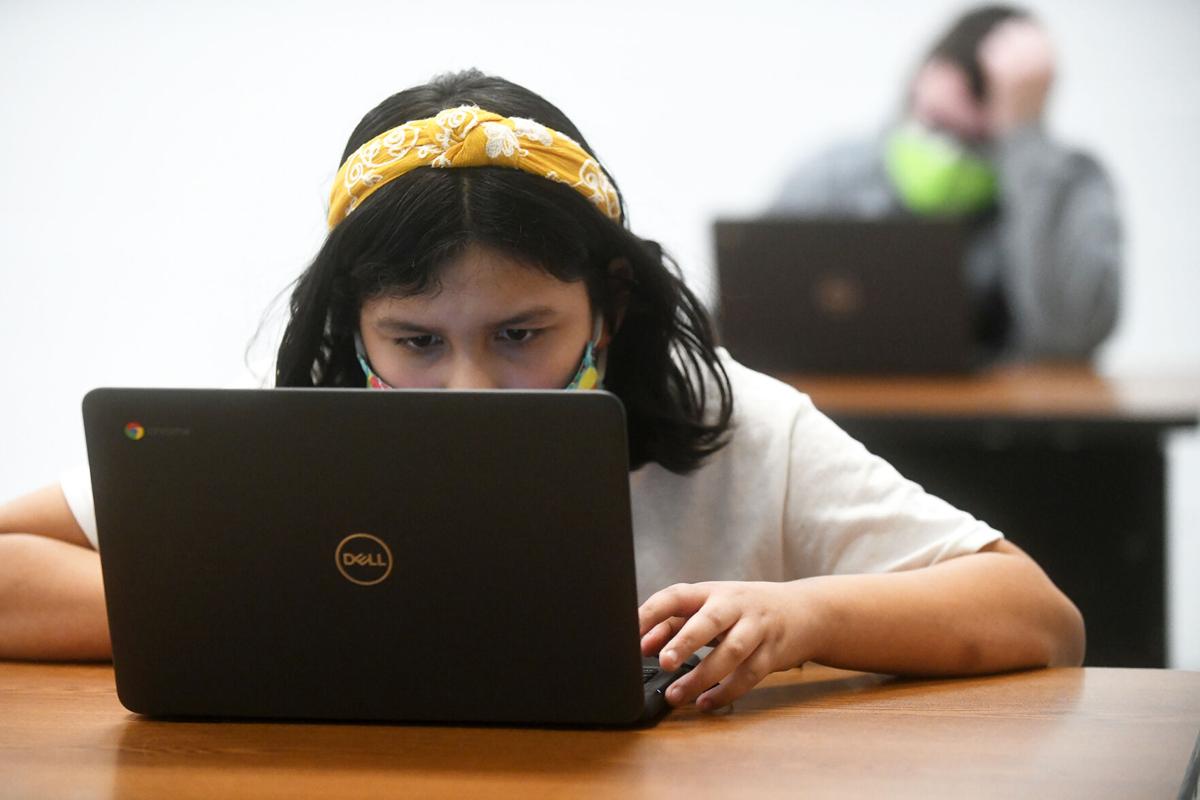 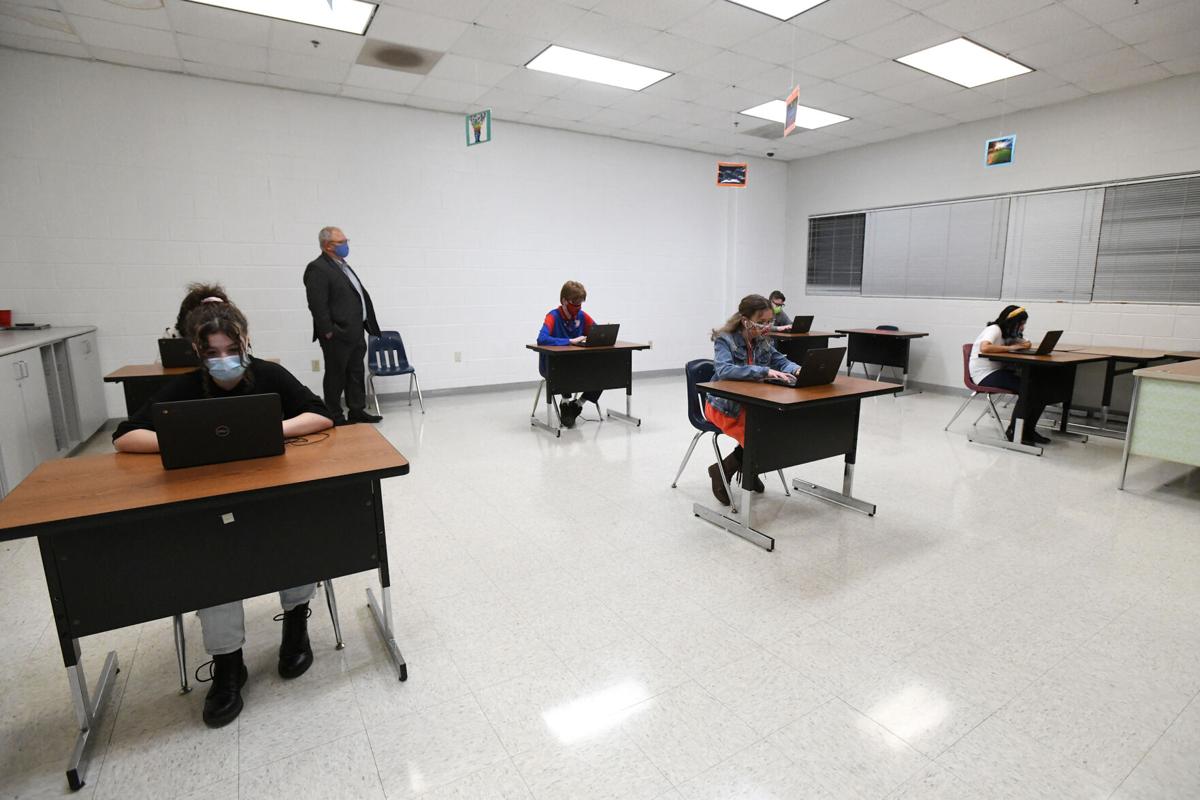 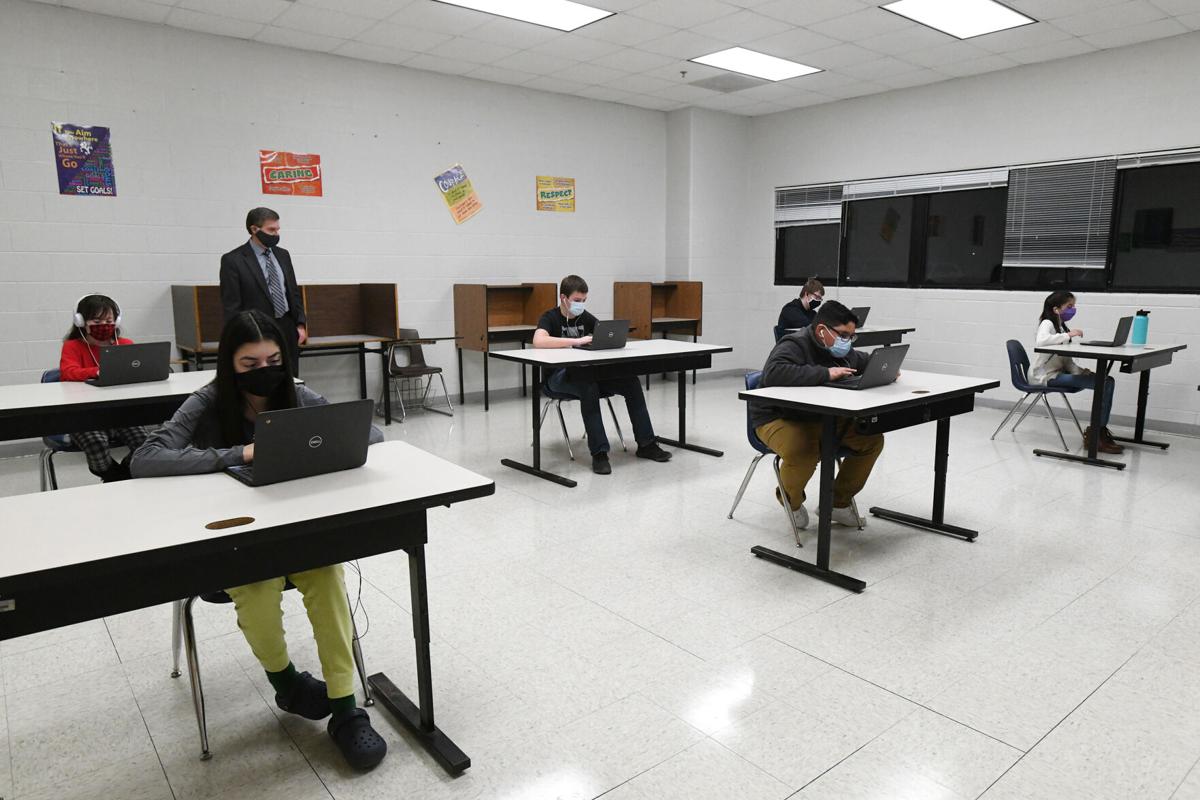 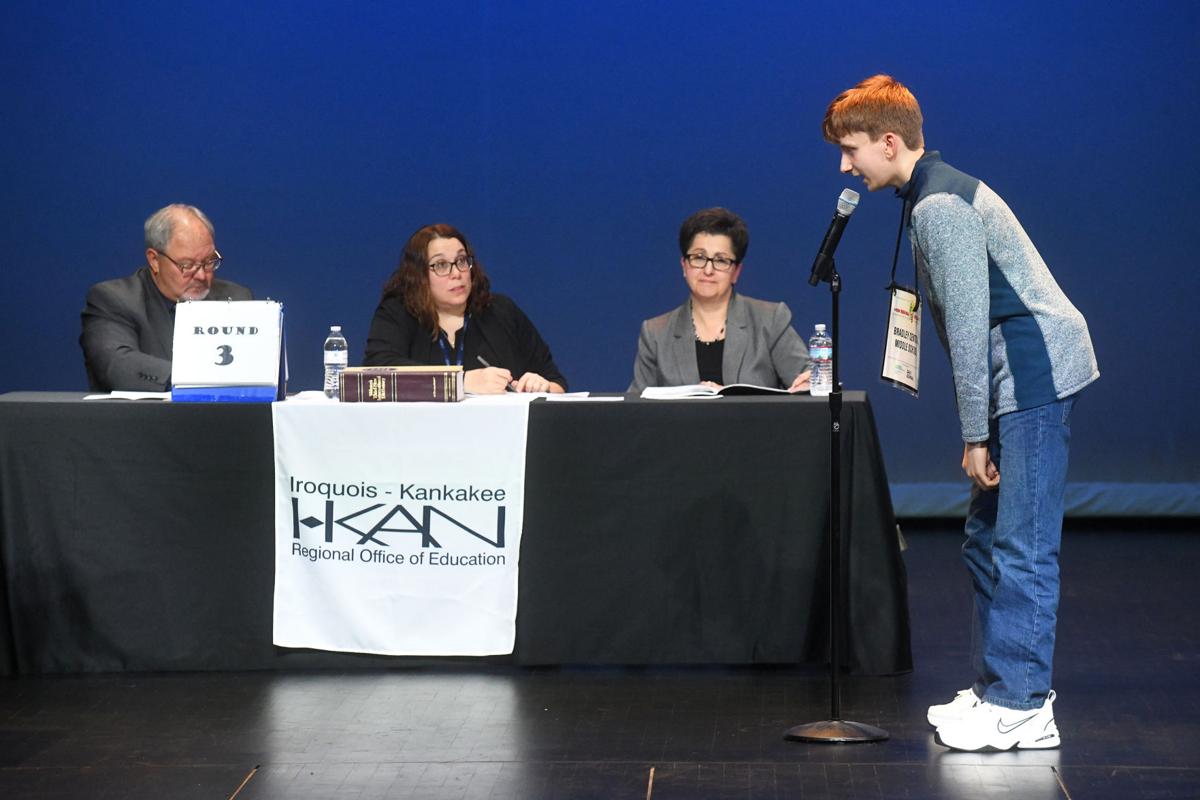 Bradley Central's Quinn Meadows spells a word during the 2020 Iroquois-Kankakee Regional Spelling Bee, where he took second place in the 10-round bout. 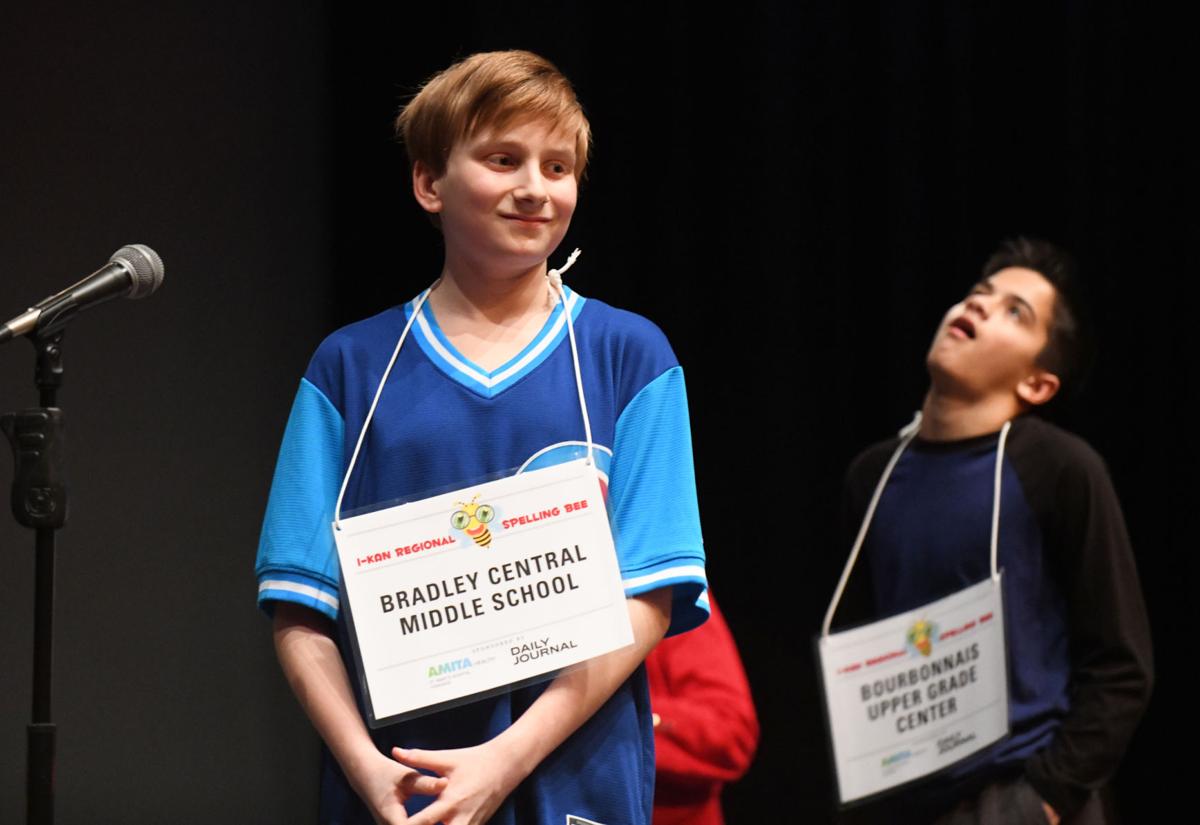 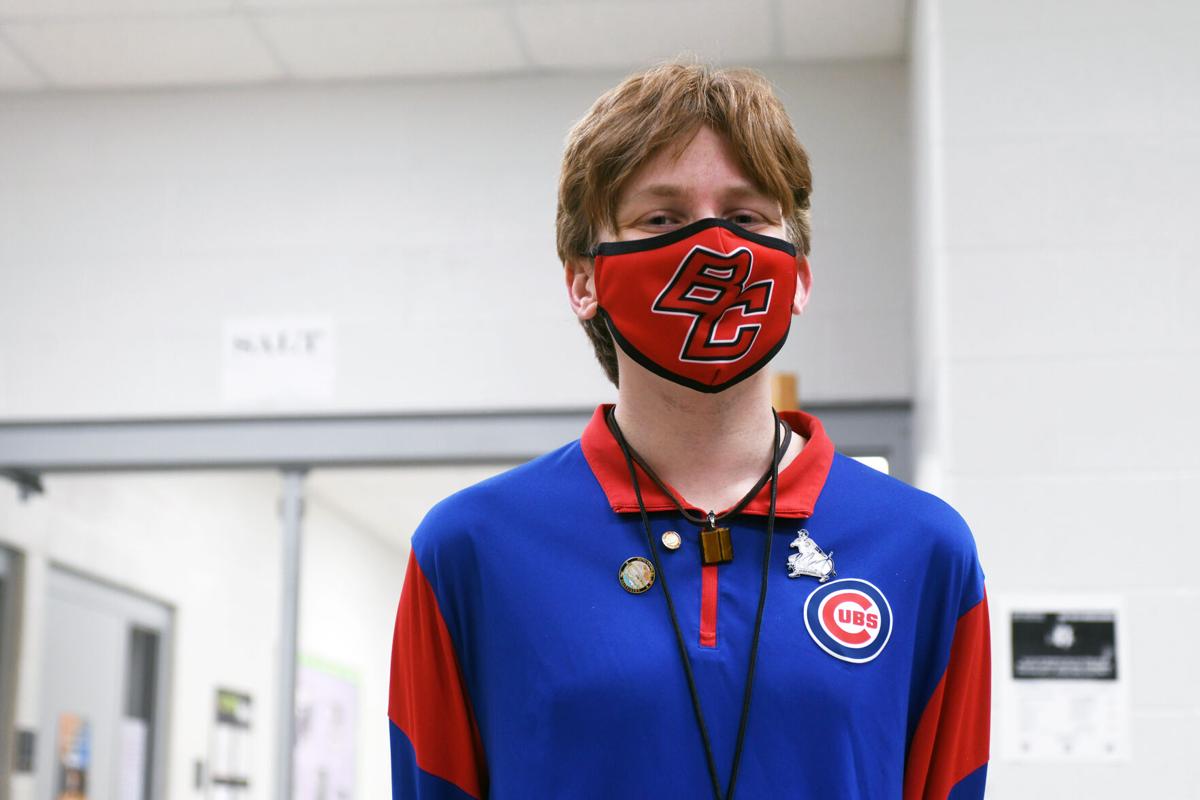 Bradley Central eighth-grader Quinn Meadows does a small fist pump upon finding out he won the 2021 Iroquois-Kankakee Regional Spelling Bee on Thursday night. Meadows spelled 30 of 50 words correct to win his second in three years.

Bradley Central's Quinn Meadows spells a word during the 2020 Iroquois-Kankakee Regional Spelling Bee, where he took second place in the 10-round bout.

KANKAKEE — The first-place winner of the 2021 Iroquois-Kankakee Regional Spelling Bee, Bradley Central eighth-grader Quinn Meadows, was no stranger to the competition, but he still never had experienced anything similar to Thursday night’s event.

“I’ve been here before, so I know how it is, but it felt different than other years,” the 14-year-old said. “I didn’t really feel like I had that much of an advantage over everyone else because I’ve never done a test like this before.”

Spelling 30 out of 50 words correctly on a virtual test, Quinn received the highest score out of 12 contestants Thursday.

Quinn also won second place in the 2020 regional competition (lasting nine out of 10 rounds) and was 2019 regional champion (emerging winner after 33 rounds).

The competitors had a hard time recalling words that tripped them up, but when asked about easy words, several said they breezed past words such as “napkin” and “science.”

As a result of his victory Thursday, Quinn advances to represent the region in the Scripps National Spelling Bee, which will be held virtually during several weeks.

The top 10 to 12 spellers to advance in preliminary, quarterfinal and semifinal competitions will continue to the in-person finals July 8 near Orlando, Fla., which will be televised on ESPN.

“I’m glad I got another chance, especially because I didn’t win last year,” Quinn said. “I know I wouldn’t have gotten to go to nationals, but it still feels like redemption almost.”

The regional competition typically is held in a high school auditorium with family members watching from the edges of their seats as words get tougher round after round until only one speller is left standing.

This year, 12 contenders from local middle schools sat down and logged onto computers to compete while maintaining social distance at the I-KAN Regional Office of Education. They were given one hour to spell 50 words while a family member or two watched via livestream from another room.

In place of the usual live announcer, students listened through headphones and were able to ask for the definition, origin or a repetition of words from their computers.

While the format of Thursday’s competition was different, Quinn said there were positives to doing a virtual spelling bee.

For example, all competitors took the same test; there were no advantages for those happening to step up to the mic to spell a more familiar word.

Quinn also noted he couldn’t hear anything other than his own exam, which helped him to focus.

“When you’re on stage with everyone else, you can see people spelling, and you’re like, ‘Oh, that guy is good’; your brain is kind of working, but there I was only thinking about the words.”

“This is it; after this year, next spring is gonna come around and no spelling,” she said, referring to her son’s entry into high school and out of the spelling bee age range. “It’s going to be different to not be part of this world.”

“There were a lot of words that were derived from other languages, so it was kind of hard because I had never heard of them,” she said.

Lydia spent about 30 minutes per day studying from the 20-page list provided to competitors in preparation for Thursday’s event, she said. Not all words on the test came from the list.

“I was thankful that it was kind of a low-pressure scenario,” he said. “You got to do a lot of words instead of maybe wondering if you’d get a difficult word or not.”

Maryam Zaidi, first-time regional competitor from Bourbonnais Upper Grade Center who tied for second place, said although she was aiming for first, she was happy with how she did Thursday.

The most stressful part was not receiving immediate feedback after spelling a word like in a traditional spelling bee, she admitted.

Maryam thanked her teacher and spelling coach, Mrs. Flowers, for helping her to study and going over how different languages of origin, such as Latin or French, factor into the spelling of words.

After hearing the announcement he won first place, Quinn said he felt as though he fulfilled the expectations he set for himself after his success two years ago as a sixth-grader.

“I felt like I did really good last year; I just missed that one word [‘transference’], but this year, it was a better chance to show my overall spelling abilities,” he said.

While he would love to return to D.C., he said he’s more motivated to study now that he has to fight for the top 12 spot for the finals in Orlando.

Here are some of the words Quinn spelled correctly from Thursday's competition: