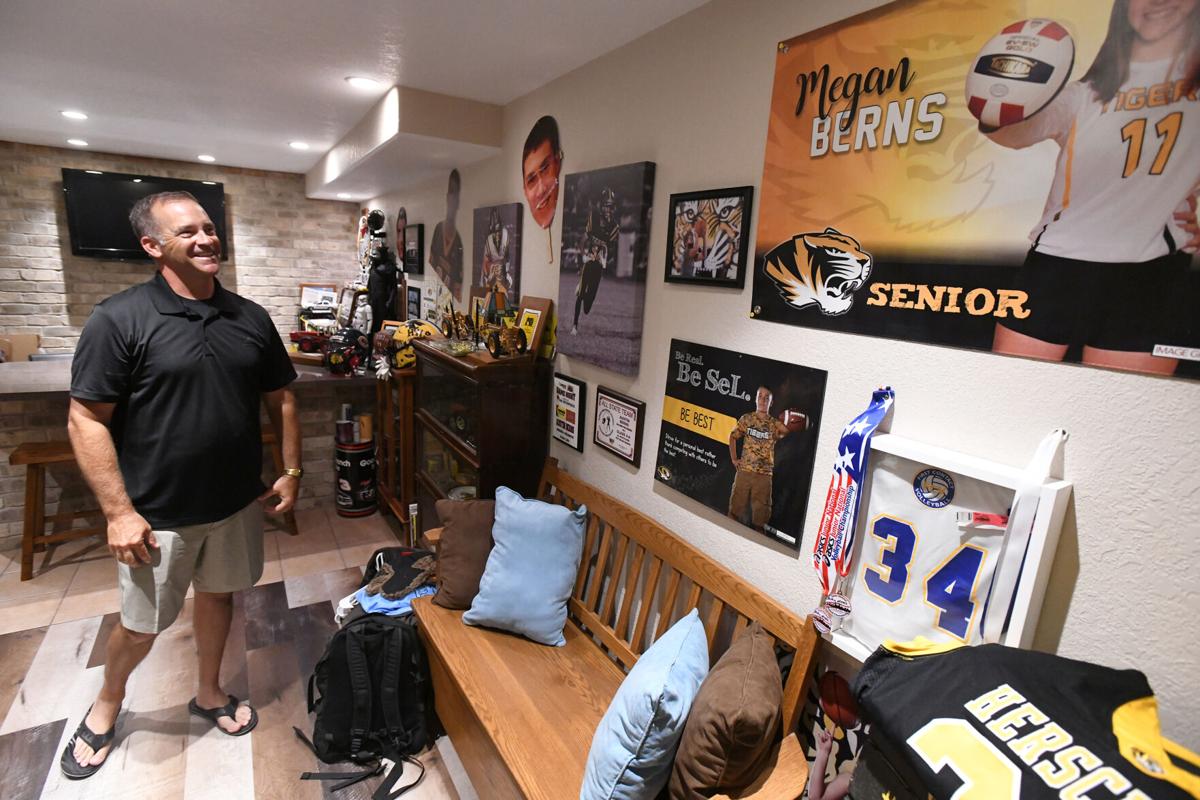 Rich Berns looks at the wall filled with his four children's sports accolades in the mancave of his Limestone home. Berns and his wife, Amy, will spend this Father's Day as empty nesters for the first time in 25 years as their youngest son, Camden, left for military basic training and college earlier this month. READ MORE. 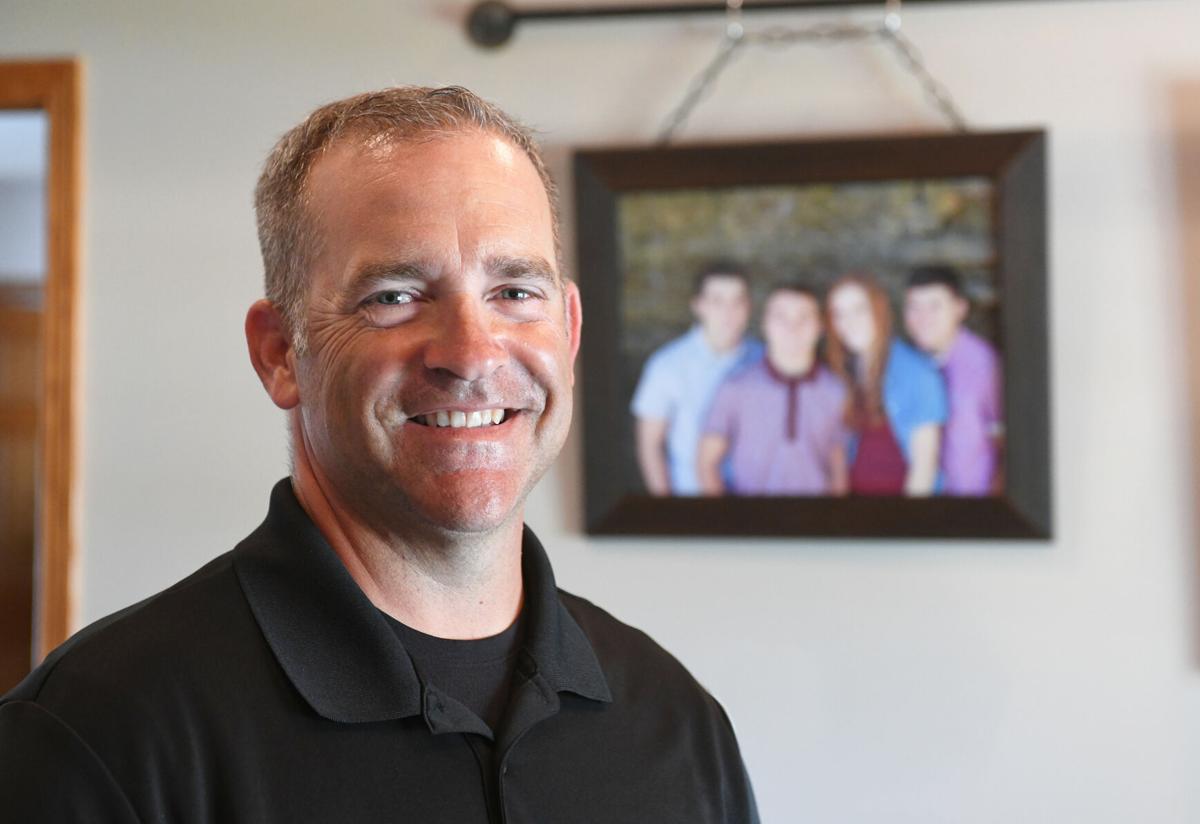 Limestone resident Rich Berns will spend this Father's Day with his wife, Amy, as an empty nester for the first time in 25 years.

Rich Berns looks at the wall filled with his four children's sports accolades in the mancave of his Limestone home. Berns and his wife, Amy, will spend this Father's Day as empty nesters for the first time in 25 years as their youngest son, Camden, left for military basic training and college earlier this month. READ MORE.

Limestone resident Rich Berns will spend this Father's Day with his wife, Amy, as an empty nester for the first time in 25 years.

Rich Berns can hear a pin drop in his house.

He can watch whatever he likes on television.

He can sit outside on his patio and hear the birds chirp.

What he is not hearing these days is the hustle and bustle of his four children. He is not hearing the daily stories of teenage or young adult life. He’s not seeing his children’s friends gathering around the backyard swimming pool and grilling.

Those are the words the veteran Kankakee County Sheriff’s deputy uses to describe his River Bend subdivision home just off of Illinois 113.

Now 48, Berns and his wife, Amy, are empty-nesters. Transitioning to this new life won’t happen with a snap of the fingers.

A father at the ripe old age of 23, Berns finds himself without children in his home for the first time in a quarter century, and he freely admits it’s something of a weird, awkward feeling.

He said he will be celebrating Father’s Day and is hoping he at least will have visits from a couple of his children.

The father of Austin, 24; Trevor, 22; Megan, 20; and Camden, 18, is entering the next phase of life, this one being without the constant comings and goings of four children.

“It’s been an amazing experience since Austin arrived, and it only grew from there,” he said on a sunshine-filled Tuesday afternoon while seated on the back patio. “Sure, there were frustrations and joy. But there is one thing I can say for sure: I wouldn’t trade it for anything. There has been so much enjoyment.”

But similar to so many things experienced in life, the events — which took years to complete — seemingly were over in the blink of an eye.

He now wonders where the time went.

“Fatherhood has been amazing. But it goes by so quickly. I wish now I would have paid attention more. But, you know, you’re living life and things get in the way. And there were those days you just wished for quiet,” he said before pausing. “It does go by so quickly.”

The couple’s eldest son, Austin, who resides in Florida, said the fact his dad is so emotional now surprises him. His dad, he noted, was not a guy who displayed emotions freely, especially sadness.

“I’m not surprised he misses us, but he’s not an emotional guy. We always knew how much our parents loved us, but they weren’t ones to talk about it,” he explained.

Austin said their parents showed their love by pushing their children to be better.

“Their honesty was how they showed love,” Austin said.

His father provided guidance during those formative years, but Austin said their relationship now is turning to one of friendship.

“He will always be dad, of course, but now he’s my friend. That’s the way it should be,” he said of a grown child’s relationship with parents. “In our society today, there are so many parents who want to be friends with their children, in my opinion. I think that’s because it’s harder to be a parent than it is a friend.

“Now, we have a great relationship.”

Regarding his concern of a Father’s Day visit, Megan said she will be on hand. She is returning to Kankakee County after Air National Guard training in Alabama.

“My parents played such a huge role in who I am,” she said. “They pushed me to do the best. I miss being home. I miss being with dad,.”

Megan knew there would be issues of loss as her siblings left home, no matter how brave a face as her dad would display.

She cracked: “It definitely doesn’t surprise me that dad misses me. I knew that would be hard. I’m the favorite.”

Berns’ story, of course, is no different than parents who had one children or 10 children.

A house filled with activity eventually becomes as quiet as an intense chess match.

“It kind of stinks,” he bluntly stated. He noted he and Amy have two dogs, but that’s really not the same.

He said he tries to stay busy in his off-duty hours. He’s joined a golf league. He freely admits he’s not very good, even though he’s created a backyard chipping green.

“There’s an emptiness when they leave. This has been a major shock for us. We are working through things, but we certainly look forward to anytime the kids come around.”

Berns, of course, was aware of what was headed his way. When Austin left home, there were still three. But slowly the house emptied, and when Camden departed shortly after graduating Herscher High School for Army boot camp at Fort Sill in Lawton, Okla., only a few weeks ago, there were no other younger children to fill the void.

The emptiness has not overwhelmed Berns, but it certainly has that effect on many. The term for it is simply “empty-nest syndrome.”

It’s not a clinical diagnosis, but it is experienced by many. Most believe it is a situation for mothers, but fathers experience it just the same.

It is a feeling of sadness, of emptiness. It can be accompanied by depression or grief.

The new situation can lead to feelings of experiencing little interest or pleasure in doing things. There can be a sense of hopelessness. Parents suffering with it can have difficulty sleeping or sleeping too much. There can be a loss of appetite or overeating. Concentration can become an issue.

Most people get through these changes on their own, but sometimes there is a need to talk to others.

There are coping skills for it as well. Professional counselors suggest some rather basic techniques. Chief among them is stay in touch with children. If the child has not called, then the parent can initiate the call.

THE ORDER OF LIFE

A parent’s main job is to stay positive. Children leaving home is the natural order of life.

“I wonder what they are doing,” Berns acknowledged.

At his urging, Camden recently sent a photograph of himself from boot camp. He had an extremely short haircut.

He also called home. Berns described the phone call as a “major moment.”

“You never stop being a parent. Whether they are at home or not, you still are their parent,” he said, again pausing. “It’s bittersweet. You’re happy for them to be grown, but you would still like to cuddle with them. They are always our children, and now they are your friends.”

Asked if he would like to raise the four all over again, Berns didn’t hesitate.

If only the clock could be turned back. If only.

Number of fathers worldwide. Of those, 66.3 million are from the U.S.

The amount spent per father for Father's Day. By comparison, Mother's Day spending is $138.36.

An estimation of the number of Father's Day cards sent. It is the 5th largest card-sending holiday occasion in the U.S.