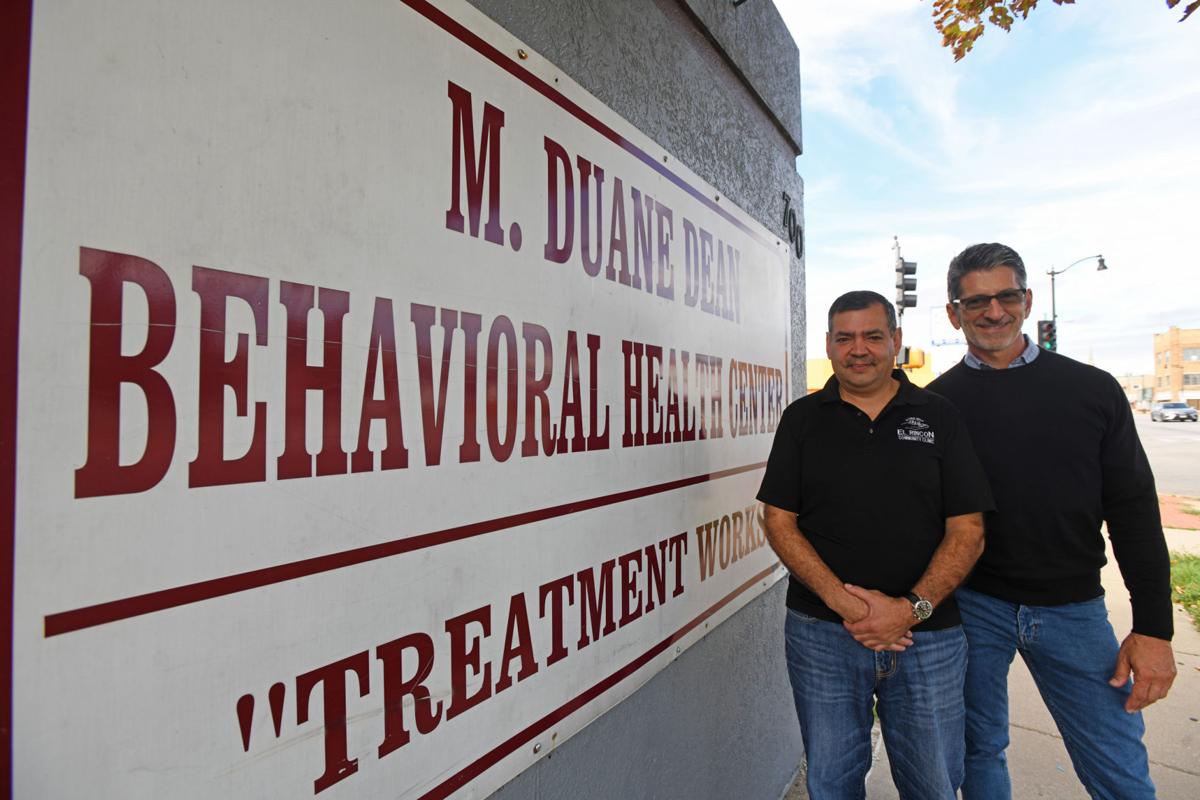 Duane Dean Behavioral Health Center clinical director Victor Nevarez, left, and director of community relations and development Bill Barnes stand outside the 700 E. Court St. building where expansions are in the works. “We want to help as many people as possible,” Nevarez said. 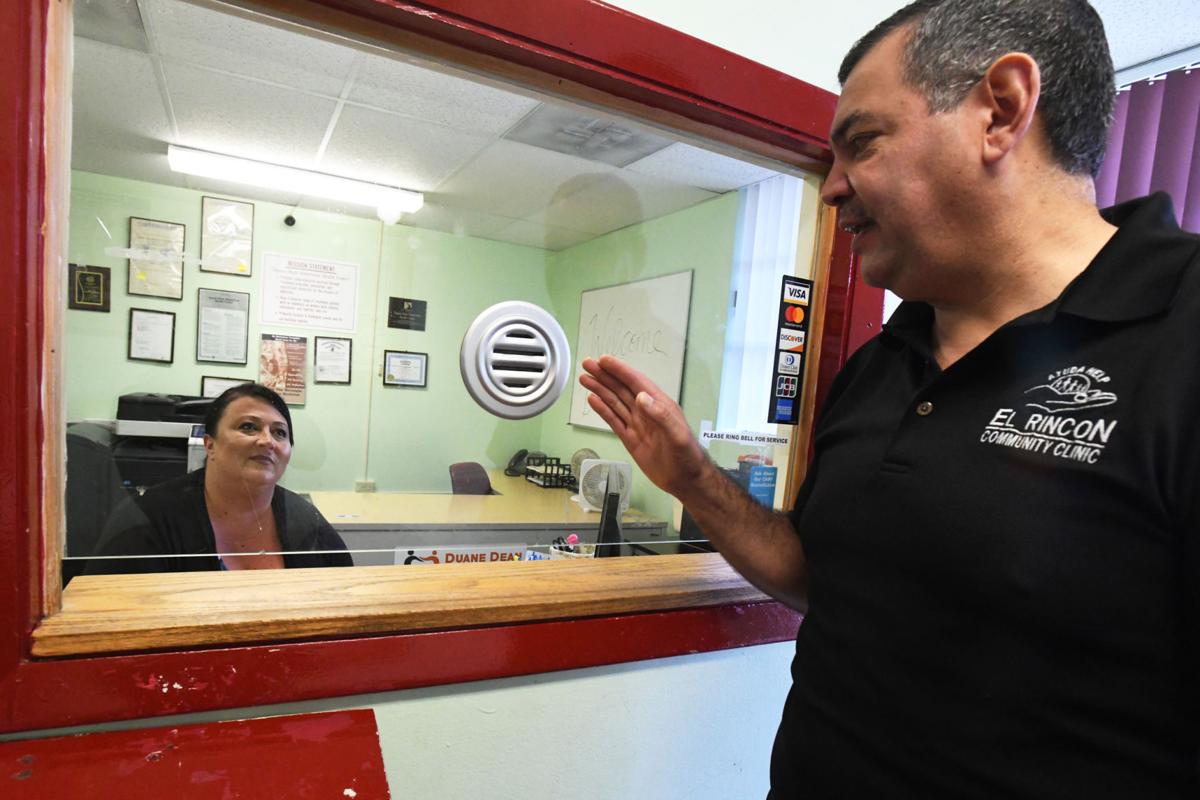 Duane Dean Behavioral Health Center clinical director Victor Nevarez, right, talks with receptionist Stephanie Miller in the entry of the 700 E. Court St. building where expansions are in the works. "We want to help as many people as possible," Nevarez said. 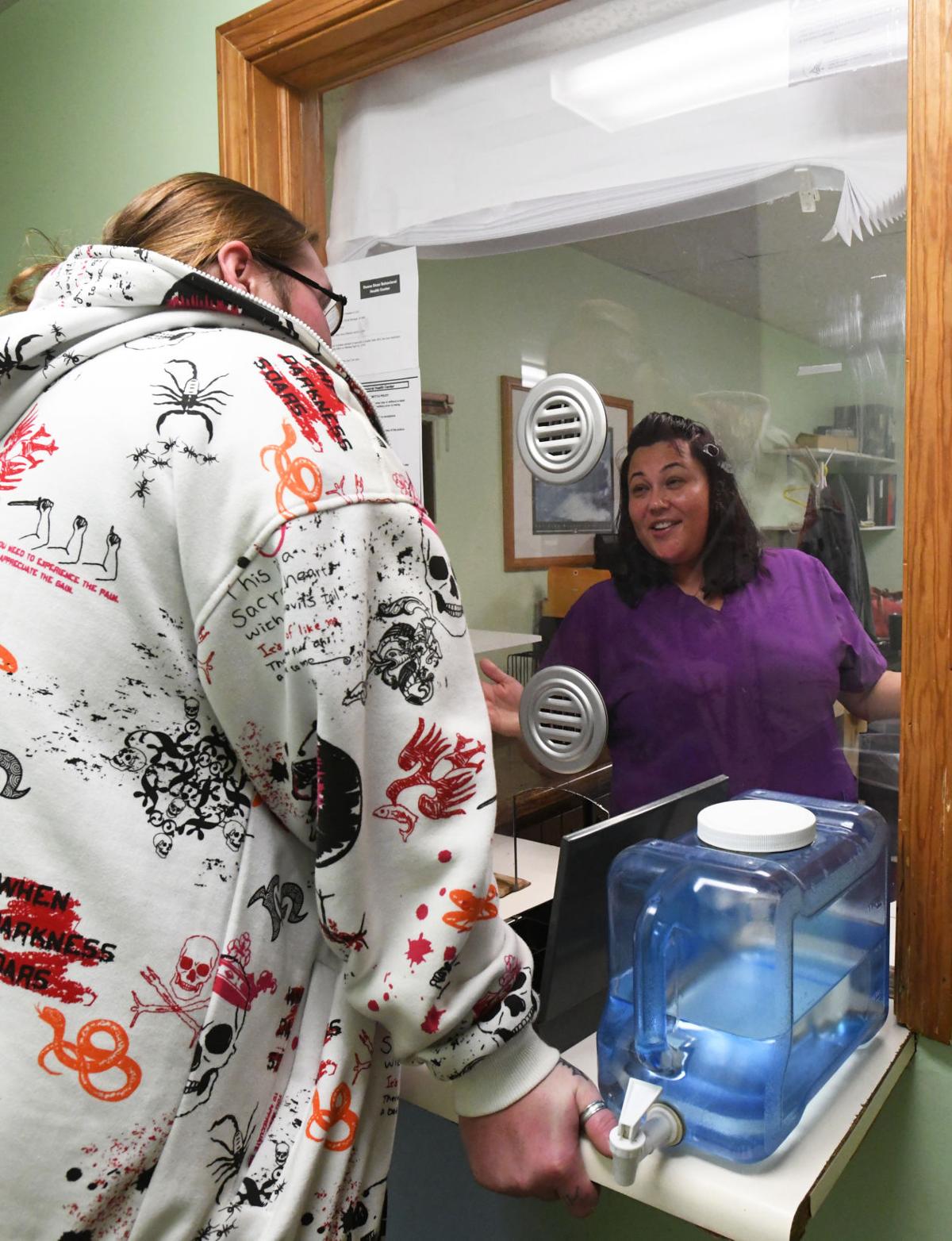 A client talks with Duane Dean Behavioral Health Center worker Victoria Pizano, LPN, at the 700 E. Court St. building where expansions are in the works.

Duane Dean Behavioral Health Center clinical director Victor Nevarez, left, and director of community relations and development Bill Barnes stand outside the 700 E. Court St. building where expansions are in the works. “We want to help as many people as possible,” Nevarez said.

Duane Dean Behavioral Health Center clinical director Victor Nevarez, right, talks with receptionist Stephanie Miller in the entry of the 700 E. Court St. building where expansions are in the works. "We want to help as many people as possible," Nevarez said.

A client talks with Duane Dean Behavioral Health Center worker Victoria Pizano, LPN, at the 700 E. Court St. building where expansions are in the works.

KANKAKEE — The administration of the Duane Dean Behavioral Health Center would like to see the doors at its East Court Street clinic bursting with an overflow of clients.

Of course, the drug rehabilitation organization ultimately would prefer that no one need its services. That preference, however, is not reality.

The clinic, taken over 16 months ago by Rincon Family Services of Chicago, has found the daily count of people seeking help with drug addiction — chiefly opioid addictions — has more than doubled.

The clinic’s average daily patient count was 85 when it took over operation in April 2017. Today, the clinic, funded with $800,000 through the Illinois Department of Human Services’ Division of Alcohol & Substance Abuse, has a daily patient count ranging from 165-175.

The doubling of the patient census is not the only major achievement for Rincon as it takes the reins of Duane Dean. Facility and program expansions also are underway.

The organization is expected to close on the two properties next week. Renovations expected to total some $150,000 are being planned for the former funeral home as it’s being eyed as a social services/counseling center.

“We are expanding the footprint of drug treatment,” Nevarez said. “People here have a stigma of methadone and what it does. This is about saving lives, saving families. We want people to be able to once again lead normal lives.”

Founded in 1972 under the name Thresholds, the center was located at Shapiro Development Center. The name was changed in 1976 to honor M. Duane Dean, a local pharmacist who helped sound the alarm about the region’s problem with heroin addiction.

Since taking over the clinic’s management from former longtime executive director Herb Delaney, Nevarez has doubled the staff to 14 members. He said when the expansion is completed at the new sites, he expects the organization could have as many as 30 employees.

But this development is not about job creation, but rather rehabilitation.

He said for far too long, patients were being forced to wait weeks to start recovery therapies. And in many cases, people forced to wait simply fall back into their previous lifestyle and abuse drugs.

And while the stereotype of heroin abusers are those of the poor, uneducated and minority, that is far from reality, he said.

In fact, he noted, 50 percent of those in recovery at the clinic are employed. Many, he noted, have respectable, professional-type jobs.

“Once people become stabilized on methadone, they are able to function,” he said.

Heroin and opioid abuse long has been a problem, but in recent years, the level of opioid overdose deaths has become a great public concern.

In neighboring Will County, 88 deaths have been connected to heroin this year, and overdose deaths claimed 118 lives — 85 of which were heroin or fentanyl related — in 2017.

Fentanyl is a highly-addictive narcotic. It can cause respiratory distress and death when taken in high doses or when combined with other substances.

Kankakee County Sheriff Mike Downey said the goal is not arresting and locking up addicted people.

“We tell people: Get help. This is as close to an epidemic as we can get. We have to get help to these people,” the sheriff said. “We can lock drug offenders up for six months, but the minute they walk out of here, they are going to find the drugs.

“We have to get them the help. We have to do better.”

Downey said the unfortunate part of this problem is no one knows how massive it is. He said police now are finding fentanyl-laced marijuana.

Drug overdoses became the leading cause of death for Americans younger than 50, noted Bill Barnes, Duane Dean’s director of community relations and development. He said there are 42,000 opioid-related deaths annually in the U.S.

Since 2008, there have been 11,000 opioid-related deaths in Illinois. Barnes said in 2017 alone, Riverside Medical Center had more than 600 documented cases of drug overdose. Statistics from Presence St. Mary’s Hospital were not available, but Barnes said they must have also treated hundreds.

“These are huge numbers. This is rampant,” he said.

But, Barnes noted, statistics are not what is driving Duane Dean.

“We are treating people. We are not treating statistics. These are people and they need help.”