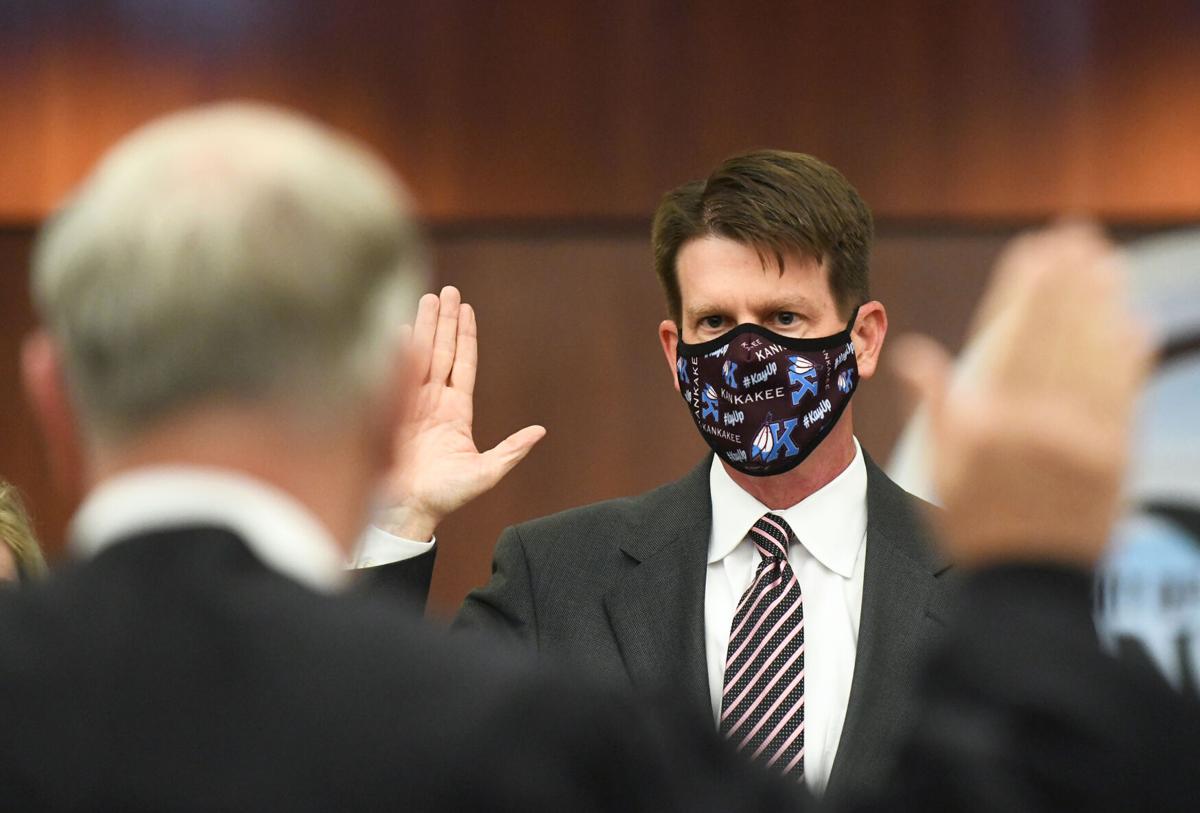 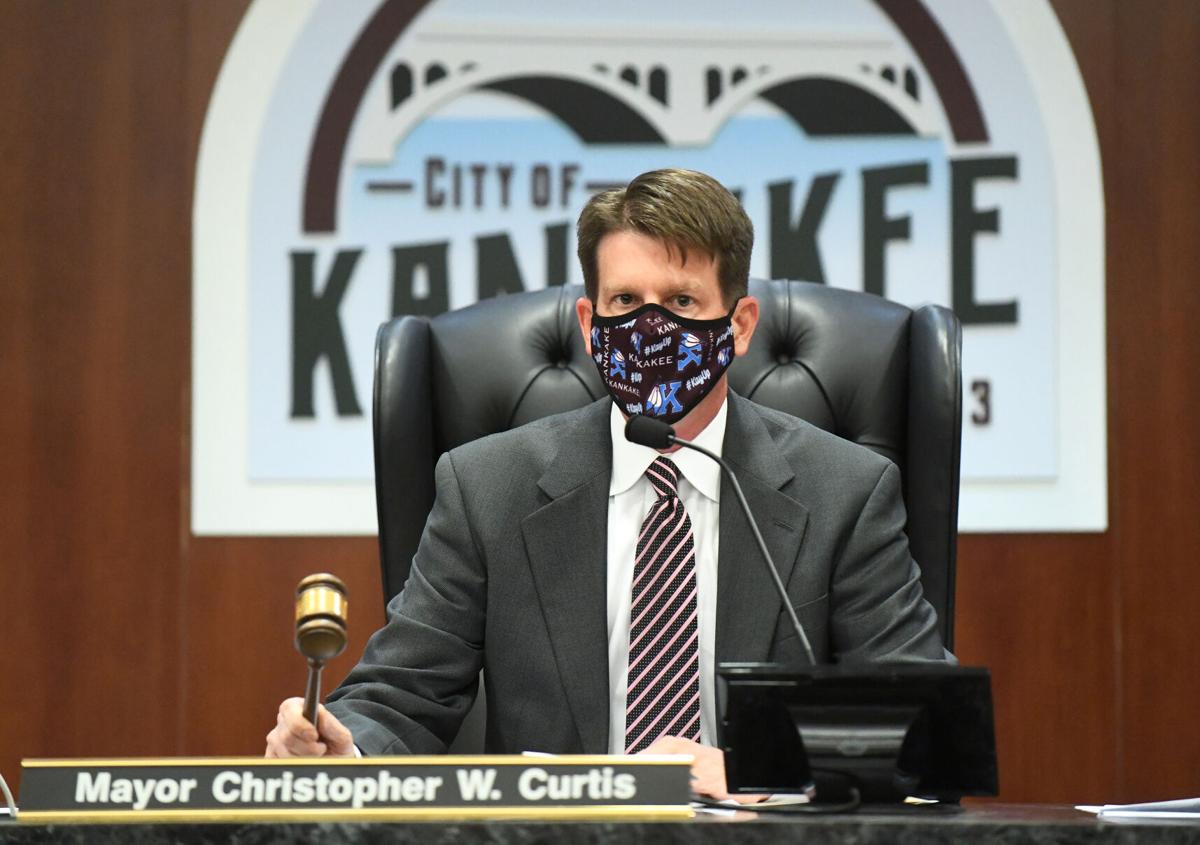 Mayor Chris Curtis calls to order his first Kankakee City Council meeting Monday night after being sworn in along with incoming and returning aldermen and alderwomen. 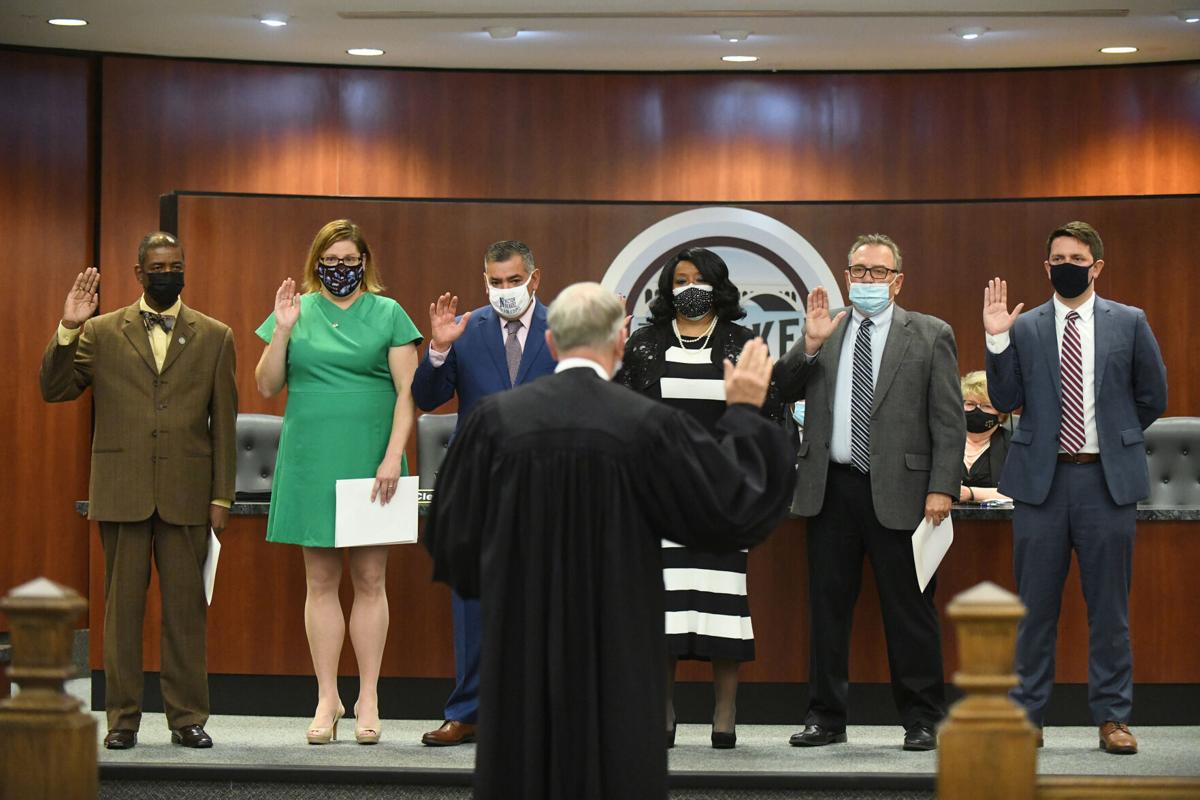 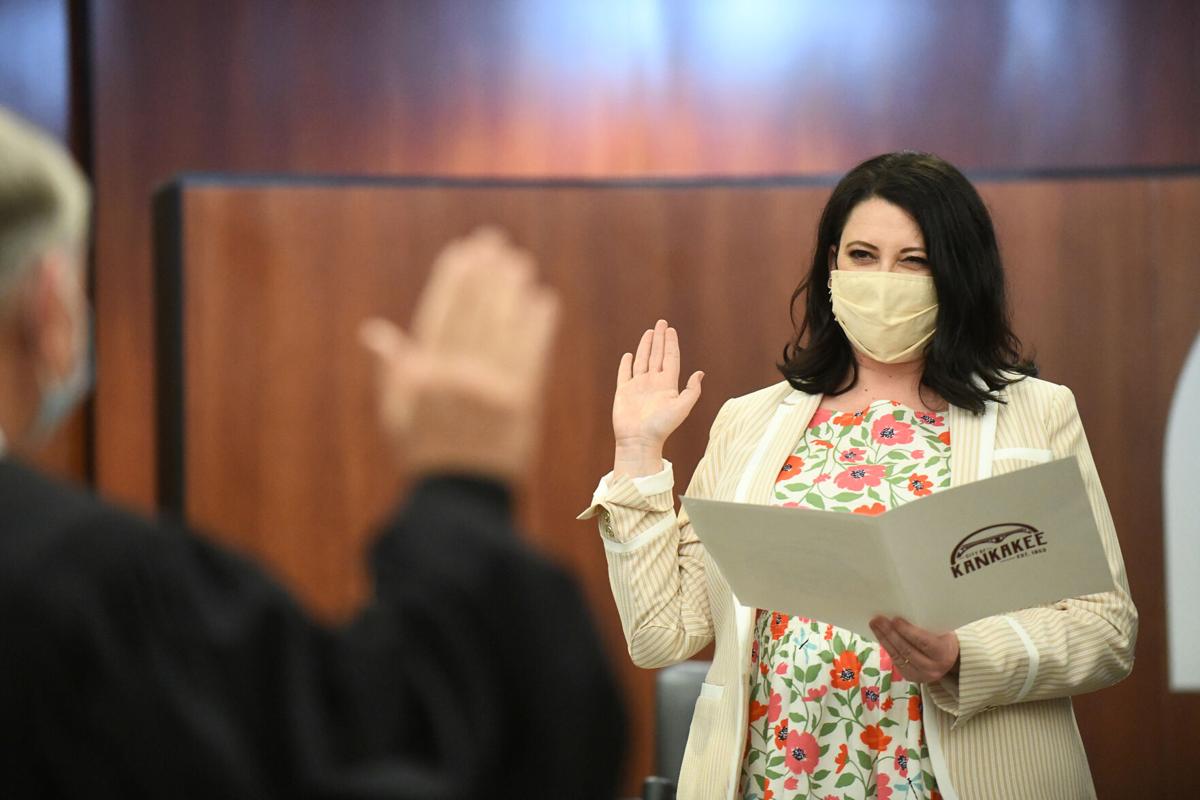 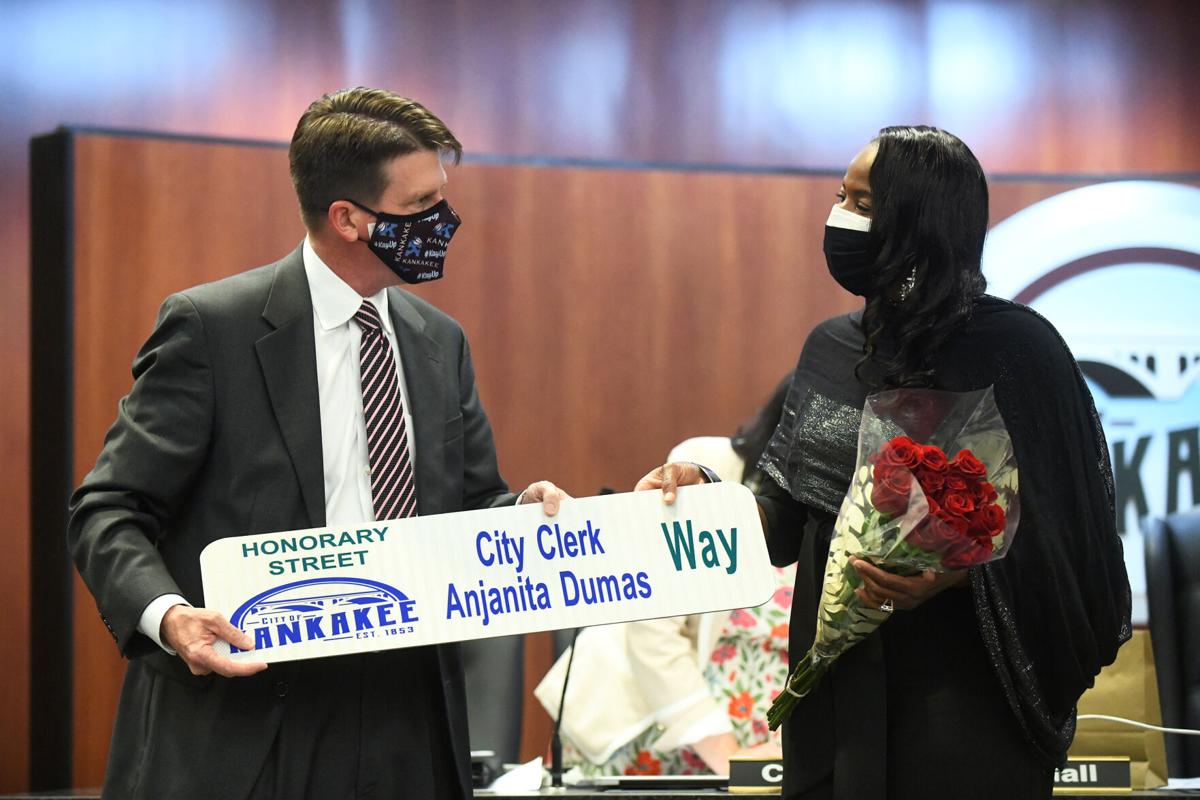 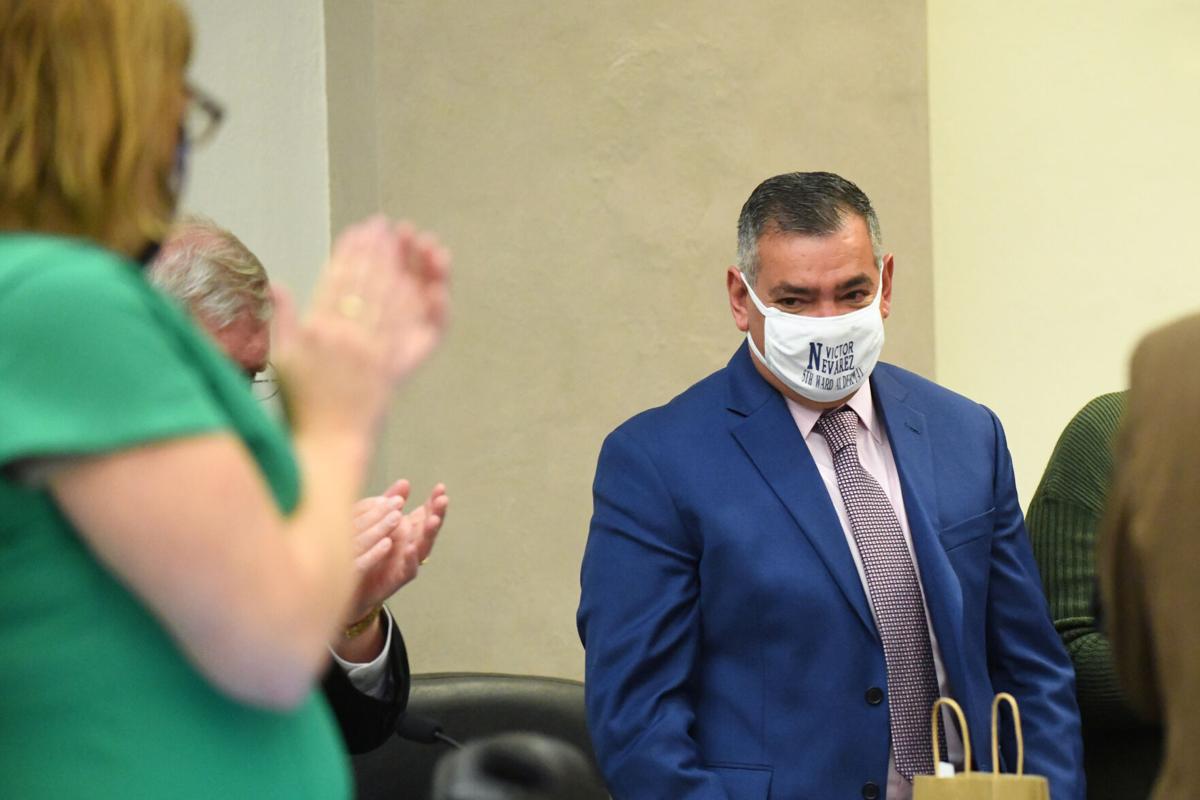 Newly sworn in 5th ward alderman Victor Nevarez stands for applause after Mayor Chris Curtis recognized him as the first Hispanic alderman to serve on the Kankakee City Council during Monday's meeting. 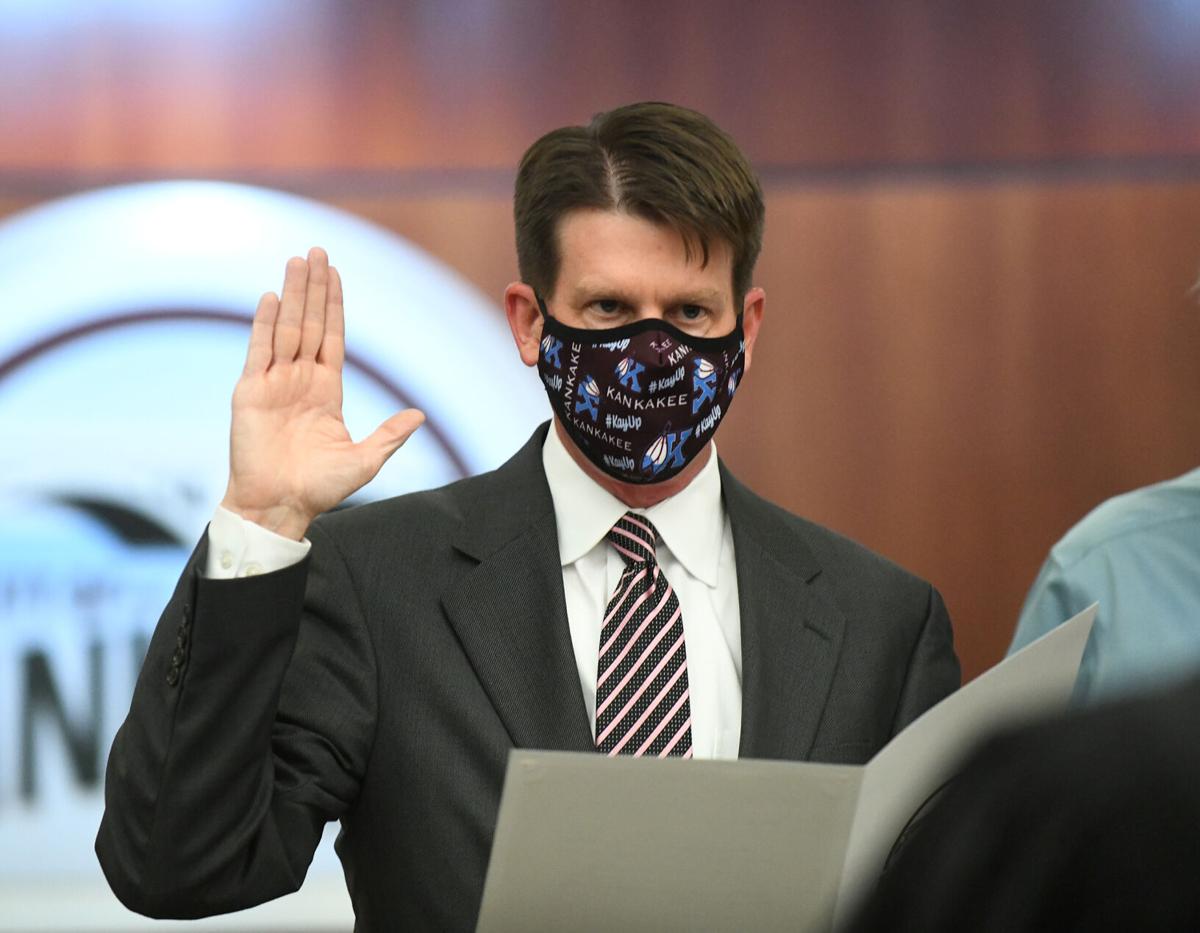 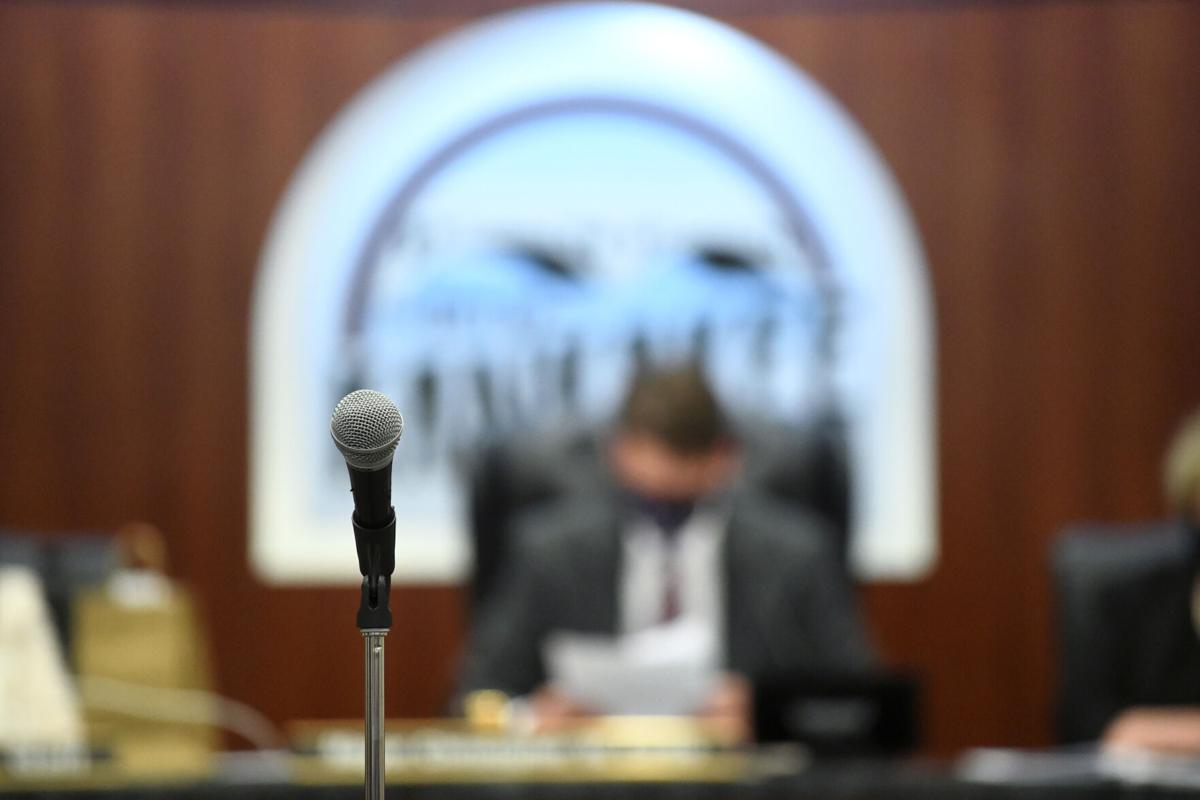 Mayor Chris Curtis calls to order his first Kankakee City Council meeting Monday night after being sworn in along with incoming and returning aldermen and alderwomen.

Newly sworn in 5th ward alderman Victor Nevarez stands for applause after Mayor Chris Curtis recognized him as the first Hispanic alderman to serve on the Kankakee City Council during Monday's meeting.

KANKAKEE — Throughout his mayoral campaign and into the weeks as mayor-elect, Chris Curtis repeatedly stated public safety was his top focus. He reiterated that sentiment after taking his oath of office.

During a several-minute address to the Kankakee City Council following his swearing-in ceremony, the Republican mayor once again made it clear that issue remains his top concern.

“We must do whatever it takes to get control of our streets. We owe it to every resident, especially our children, to provide safe streets, safe parks, safe walks to and from school, in every part of our city,” he said.

The former nine-year 6th Ward alderman also stressed code enforcement, city finances, economic development and returned to collaboration as the main points as he kicked off his four-year term as mayor.

He has already called a meeting of all senior law enforcement officials in Kankakee County in the coming week as they begin working together to develop the strategy to reduce crime and enhance public safety.

He vowed aggressive use of the city’s nuisance abatement ordinance to address problem properties.

“If we can stop small problems from developing into big problems, our neighborhoods will be safer,” he said.

Another area of public safety, he noted, will be the focus of getting the unlicensed ATVs and dirt bikes off city streets. He noted the danger of these vehicle operators pose to motorists, pedestrians and themselves.

“We will find the bikes and the trailers and we will impound them,” he said. He also noted the work with others to develop a safe place for these operators to ride their ATVs and dirt bikes — “somewhere off of our streets.”

“We know reducing crime and making our community safer will not happen overnight,” he said. “However, we will never quit, as this is priority No. 1.”

Regarding code enforcement, he noted the way the city looks is critical to the quality of life of the residents and the impression of visitors.

He promised additional resources to the code department budget and identifying resources to help ensure Kankakee’s appearance improves as quickly as possible.

He said bringing the operation of code enforcement “into the 21st century” by investing in technology to aid code officials is a priority, as well.

He also asked residents to help by first not throwing their trash onto the ground.

“Second, if you see trash on the street or the sidewalk or in the alley, pick it up and throw it away.”

On the subject of finances, Curtis said much work is ahead. He noted every bill which comes before the city council, include credit card expenses, will be available.

“This transparency and openness is how we build trust in government,” he stated.

Regarding economic development, the mayor said he wants to focus on housing and retail opportunities on the city’s north side. He noted he also is looking at the city’s east side and he had some good news to report.

He said this week he has two meetings set with developers looking to resurrect and develop new businesses on the east side.

But he stressed nothing will be accomplished if the city administration and the council members cannot work together.

“I know we are up to the task facing our city. ... I value and need your input and leadership,” he said. “I look forward to collaborating and seeing what we can accomplish together.”