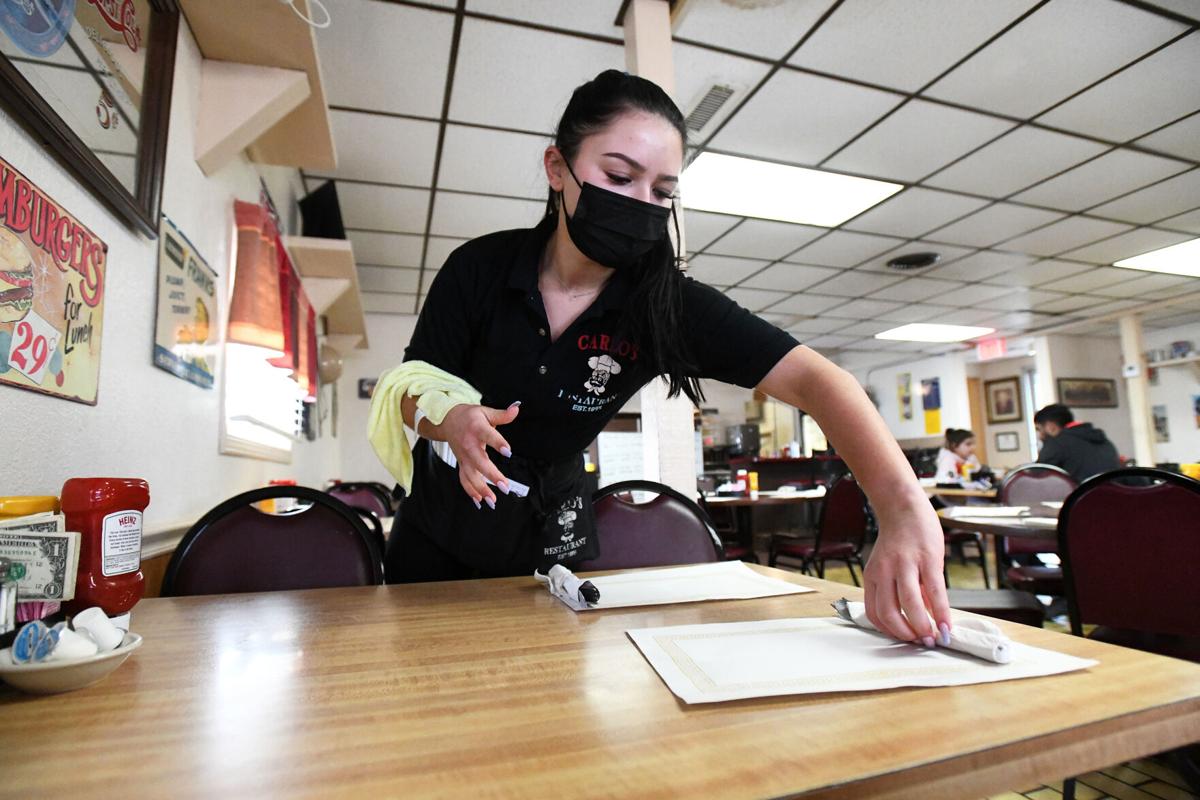 Skylar St. Paul, a server at Carlo’s Restaurant, sets a table Wednesday morning at the West Kankakee establishment. The eatery lost at least 50 percent of its business as continued restrictions hampered business during much of the last 12 months. 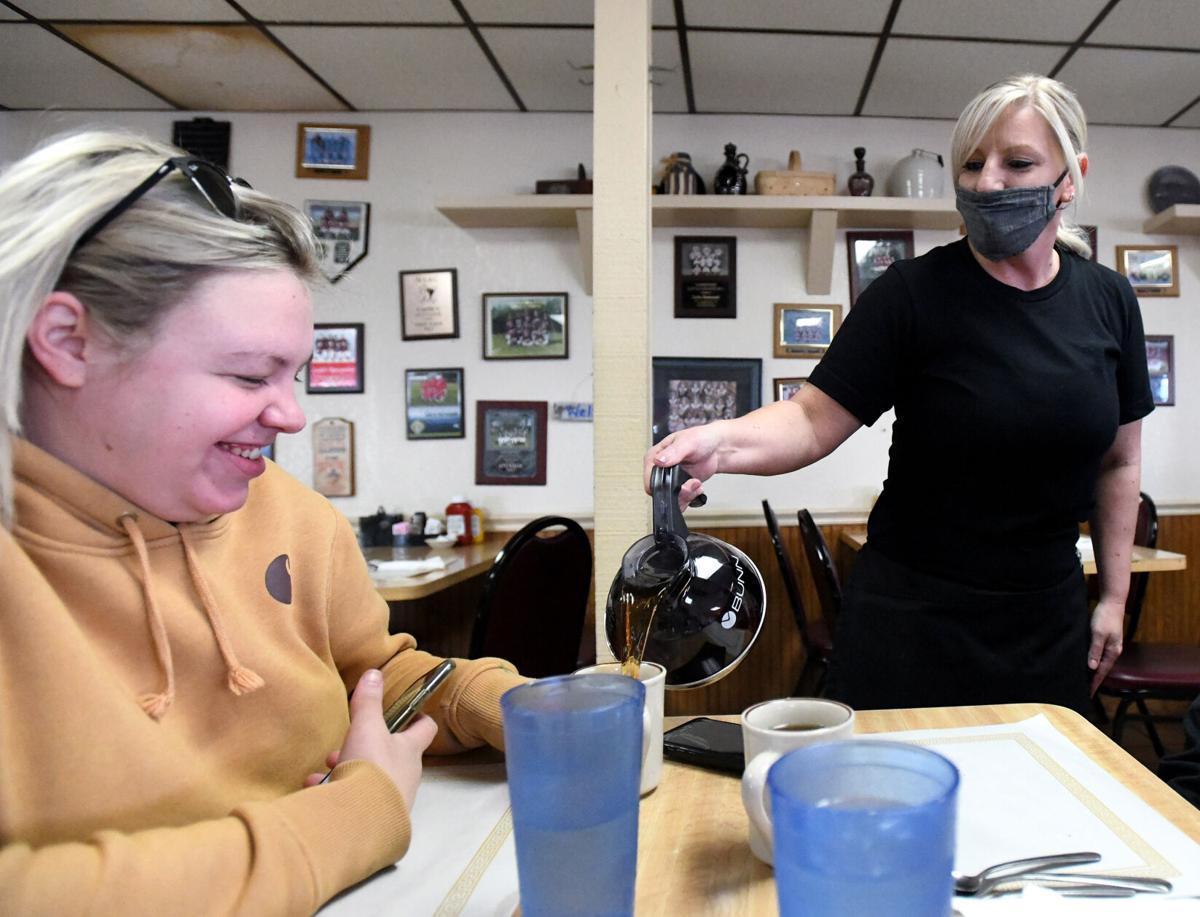 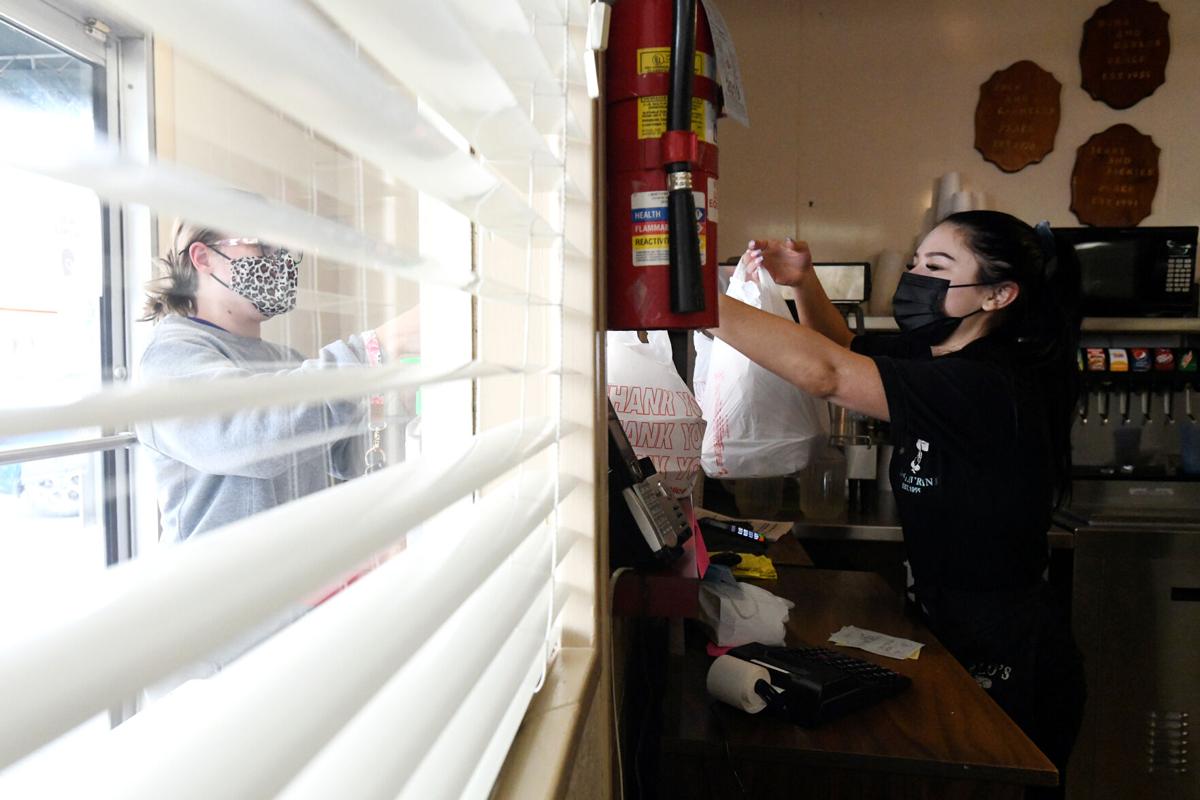 Skylar St. Paul, a server at Carlo’s Restaurant, hands off a carry-out order Wednesday morning at the West Kankakee establishment. 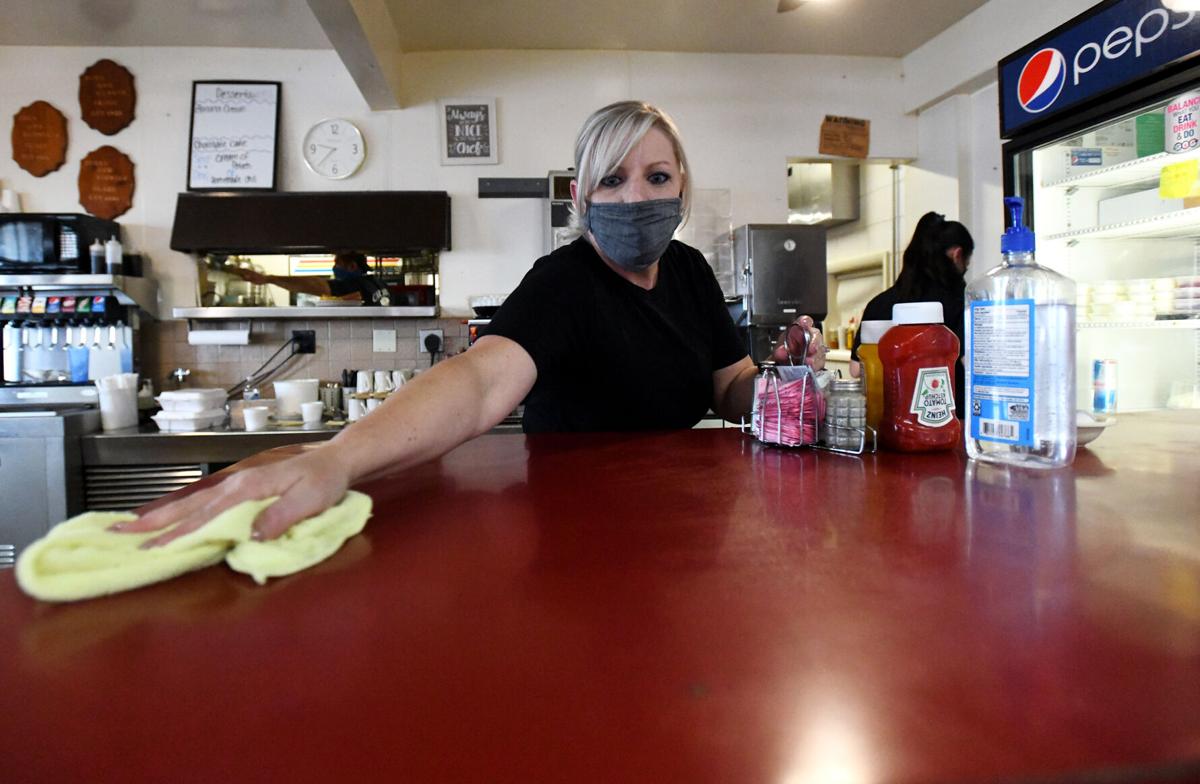 Christine Grayling, a longtime server at Carlo’s Restaurant, wipes down the counter Wednesday morning at the West Kankakee establishment.

Skylar St. Paul, a server at Carlo’s Restaurant, sets a table Wednesday morning at the West Kankakee establishment. The eatery lost at least 50 percent of its business as continued restrictions hampered business during much of the last 12 months.

Skylar St. Paul, a server at Carlo’s Restaurant, hands off a carry-out order Wednesday morning at the West Kankakee establishment.

Christine Grayling, a longtime server at Carlo’s Restaurant, wipes down the counter Wednesday morning at the West Kankakee establishment.

KANKAKEE — With barely a pause, Jerrimy Robinson, owner of Kankakee westside restaurant mainstay Carlo’s Restaurant, said at least 50 percent of his business these past 12 months had been lost due to COVID-19 and its related restrictions.

“It has been the most challenging year in my professional career, no, my life,” he said. Owner of the popular restaurant along West Station Street for the past seven years and an employee there nearly his entire life, he said maintaining the business has been beyond difficult during the pandemic.

“So many changes. So many restrictions,” he said. “We basically changed the whole way we operate our business. We did so many things just to survive.”

Like so many other restauranteurs, he believes he has weathered the storm.

The word “storm” may be an understatement. The pandemic’s impact on the restaurant industry has been unprecedented.

Some locations simply closed for good, most notably the popular buffet-style restaurant Coyote Canyon. Operator Jim Johanek, who declined an interview request for this story, previously explained it would largely be impossible to operate a buffet in this environment.

Restaurants put up plexiglass to decrease germ transmission. Outdoor dining under canopies or inside tents were established at many locations. Seating was significantly limited in observance of social distancing mandates from the state.

Businesses focused on carry-out orders, after Gov. JB Pritzker’s executive order banned indoor dining. Carry-out containers cost the restaurants almost as much as the food inside the package.

The order was initially followed, but as the two-week shutdown turned into months, owners began to push back to maintain their livelihood.

Robinson was one of them.

“There was no way I could shut down again,” he said as a second wave of elevated COVID-19 cases resulted in another round of state-mandated restrictions in late summer. “It would be too much of a killer to the business.”

“The response was overwhelming,” he said. “People wanted to get back out.”

Asked if the long-standing restaurant could have survived without reopening, Robinson said he was unsure.

“I don’t think so. If we did it would have been tight. I have bills to pay. ... We did so many things just to survive,” he said.

“Survival” became the restaurant industry’s word of the year.

“It wasn’t good, for sure,” is how Tim Berdebes, owner of Bradley’s Family House Restaurant summed up the pandemic’s impact on his business. He estimated losing about one-third of his business.

“That means no profit. Our profit margin is already very slim,” he said.

Like Robinson, he said owners had to make due. The goal was survival, even if it meant reducing hours, staff or menu selections.

“There was a point when I thought I might not make it. It was scary. Thank God we have pulled through,” he said.

Berdebes is crossing his fingers that early indications of 2021 being something of a “bounce back” year prove true. He also credited Bradley Mayor Pro Tem Mike Watson, like other municipal leaders, for not being heavy-handed regarding enforcement of the governor’s mandate.

“If our mayor had said we had to close down like the Chicago mayor did, we wouldn’t have made it.”

Spellman said it was simple choice: Stay closed and lose his Bradley restaurant or ignore the order and survive. He chose the latter.

Spellman noted he always believed he was on solid legal ground and he tried to explain this to others. But the others waited to see how Spellman fared legally.

“I know they were waiting to see what happened to me. I had apprehension, but if I didn’t do anything I was going to close. I was wondering just how long people could afford to be closed down,” he said.

“I was always of the belief that if you want to come in, then come in. If you don’t feel comfortable, then don’t,” he said.

Based upon his year-end receipts, Spellman said 2020 — his fifth year of operating Hoppy Pig — worked out just fine.

He noted he gained an appreciative customer base. He noted he has customers who still come in and thank him for the stand he took.

“I could have certainly gone the other way,” he said. “To me, this was an all-or-nothing thing and I was going to do what I had to do to survive.”

Even food locations who specialize in to-go and home-delivered meals like Sammy’s Pizza were stressed by what the pandemic dished out.

Scott and Brittany Manau, owners of the Sammy’s locations in Kankakee, Bourbonnais, Momence and Manteno, said the year of restrictions forced them to rethink everything.

They brainstormed new food specials, developed family pack meals and in the process made less money than they had in previous years. But their business lived to see 2021 — and hopefully profits.

“Our margins were no where close to where they should have been,” Scott said. “We made significantly less. It was very challenging.”

"It has been the most challenging year in my professional career, no, my life."

State of the industry

According to the National Restaurant Association's 2021 "State of the Industry" report, which surveyed more than 6,000 restaurant operators nationwide, the impact of COVID-19 on this sector has been far and wide.

• The restaurant industry ended 2020 with total sales about $240 billion below the association's pre-pandemic forecast for the year.

• As of December 2020, more than 110,000 eating and drinking places closed either temporarily or permanently.

• The eating and drinking place sector finished 2020 with nearly 2.5 million jobs below its pre-pandemic level. At the peak of the initial 2020 closures, the association estimated up to 8 million employees were laid off or furloughed.

COVID-19 one year later: restaurants, schools, vaccines and the future

The Daily Journal is publishing stories this weekend that look back on how Kankakee County's year of COVID-19 has changed education, dining, healthcare and more.

County vaccinations start to speed up after slow start

Local health officials and hospital staff started prepping for the possibility of distributing a vaccine in the early days of COVID-19.

When schools had to abruptly close their doors last March, many worried of the long-term impacts on students.

When can we say the pandemic is over?

Questions aplenty surrounding the pandemic's end and our 'new normal.'