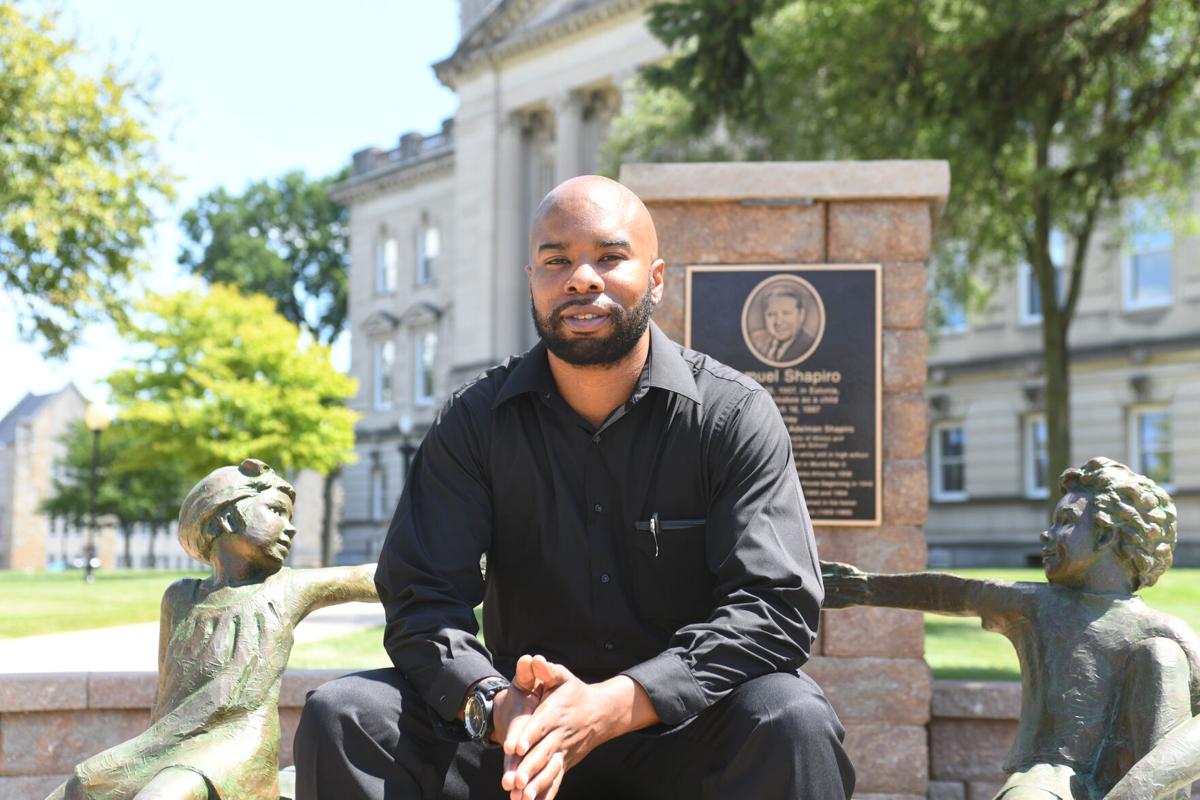 Hamim Lillard, of Kankakee, will serve as Kankakee School District’s new Community Outreach Specialist, in partnership with the Kankakee County State’s Attorney Jim Rowe’s and Kankakee County Board Chairman Andy Wheeler’s offices. Lillard said his past is what motivated him to help guide area youth on a better path. 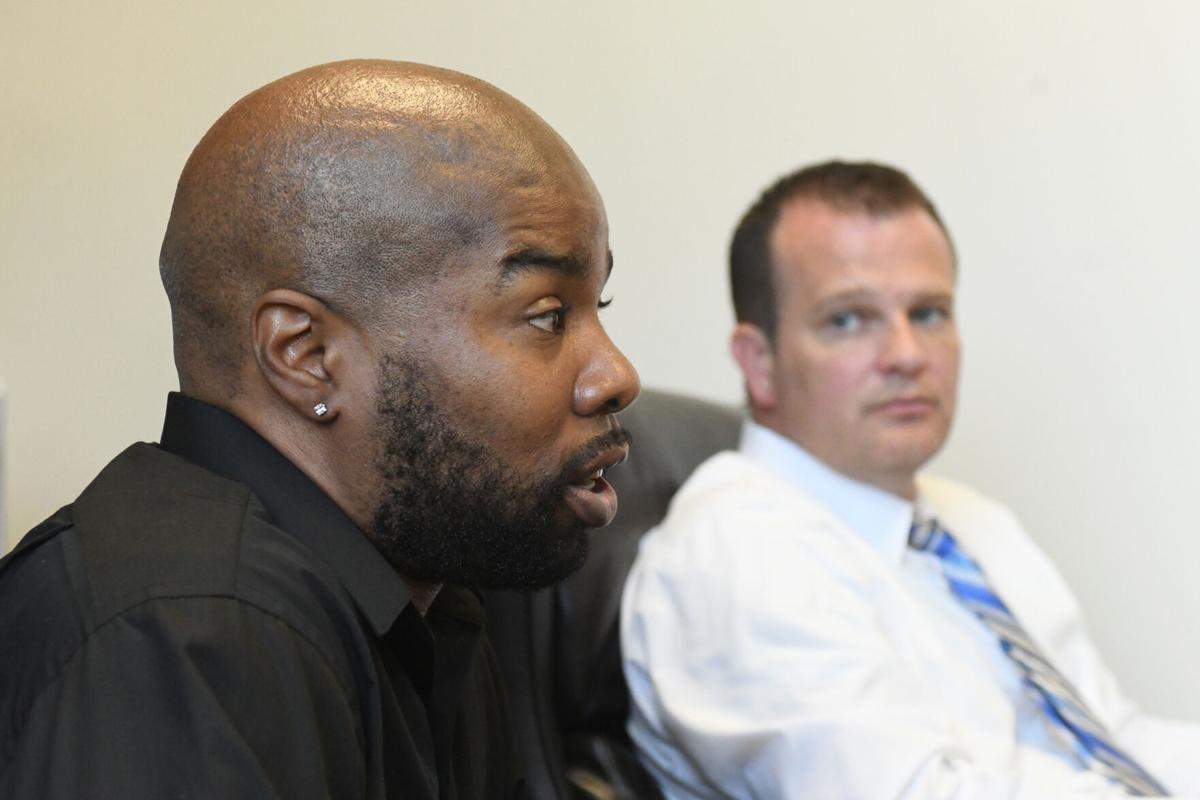 Hamim Lillard, of Kankakee, talks about how he hopes to impact kids in the Kankakee School District as Kankakee County State's Attorney Jim Rowe listens Wednesday. Lillard will serve as the district's new community outreach specialist.

Hamim Lillard, of Kankakee, will serve as Kankakee School District’s new Community Outreach Specialist, in partnership with the Kankakee County State’s Attorney Jim Rowe’s and Kankakee County Board Chairman Andy Wheeler’s offices. Lillard said his past is what motivated him to help guide area youth on a better path.

Hamim Lillard, of Kankakee, talks about how he hopes to impact kids in the Kankakee School District as Kankakee County State's Attorney Jim Rowe listens Wednesday. Lillard will serve as the district's new community outreach specialist.

Hamim Lillard knows how hard it can be to stay on the right path when it seems like the world is against you.

Growing up in both Kankakee and Hopkins Park, Lillard was in three different foster homes from ages 6 to 18 and admits he sometimes felt like he was only taken in so his foster families could receive government checks for his care.

He said that like many children who grow up in foster care, his desire for unconditional love from a caregiver caused him to lash out.

Lillard entered the juvenile court system and spent several years in his 20s in prison on drug charges. He found it difficult to start over with felonies on his record.

“Basically, I was a product of the environment,” he said. “I was greedy. I wanted money. I saw that the streets [were] an avenue, even though I felt like I always had the capability to take another route.”

But prison counselors, boot camp and Kankakee County Circuit Judge Clark Erickson’s faith in him helped to steer him in the right direction, he said.

With financial assistance from a prison rehabilitation program, Lillard earned a general studies degree from Kankakee Community College in 2014 and is in the process of going back to school to further study social work and psychology.

When Lillard decided to study those subjects, he knew attaining employment would be difficult because of his background. However, he persevered remembering the counselors and psychologists who worked with him in prison and had criminal backgrounds.

“For some reason, people gravitated toward those counselors more,” Lillard said. “Not that they are better than counselors who don’t have a background, but for some reason people feel like when they can relate to you, it hits home more.”

On Wednesday, 36-year-old Lillard sat in Kankakee County State’s Attorney Jim Rowe’s office on the first day of his new job as community outreach specialist, in the same building he once attended his own court hearings, and beamed with excitement talking about how he would help to intervene with troubled youth before they enter the prison system.

Lillard said he was already feeling the excitement earlier that day when getting his new work ID at Jerome Combs Detention Center and meeting the staff there.

“To see the other side of Jerome Combs, that was powerful,” he said.

The community outreach specialist position is a newly created initiative through Rowe’s office in partnership with Kankakee School District 111 and the Kankakee County Board.

“Getting a community outreach specialist into our office I think is going to help us reach out to the community, build some confidence and credibility between the criminal justice system and the community, and hopefully let people know that we are here to help,” Rowe said.

Rowe said Lillard reached out to him two years ago asking how he could help the community.

“When this opportunity came around, it was just made for him,” Rowe said.

Rowe said teaming up with Kankakee schools was a logical partnership because early opportunities for intervention are often the most effective.

“The best way to keep people from ending up in the adult criminal justice system is to reach them when they are teenagers or children heading in that direction,” he said.

In this role, Lillard will focus on prevention and intervention efforts, particularly with youth in Kankakee schools, but also involving other communities in Kankakee County. He is already brainstorming seminars, assemblies, expungement events and festivals for the future.

Lillard will also be involved in the office’s Diversion Accountability Program, which allows nonviolent misdemeanor and first-time low-level nonviolent felony offenders to divert from traditional prosecution and toward sentences that involve education, community service and restitution.

Lillard said he is most looking forward to getting involved with one of the office’s newer programs, I Can Go to College. The goal is to help thousands of kids realize their potential to get an education and get financial help for school regardless of their backgrounds, he said.

“When you encaptivate a mind when it’s younger, it’s 10 times easier to help mold and steer them in the right direction versus when they get older,” Lillard said. “The older you are, the more you get settled into your ways and the harder it is to break old habits.”

Part of the conditions of Lillard taking the job is that he pursues an education, which he said he is happy about because it will keep his mind fresh with ideas and set an example for the children and adults he works with.

“I want to actually help some people who went down the same path as me,” Lillard said. “I can help them realize that they can get into college as well; it’s just you got to want it bad enough.”

Lillard said his main goals are to walk into the position with an open mind, represent the community and state’s attorney’s office and find ways that he can help. He added that, although he would not wish prison on anyone, he is grateful that he found opportunities to turn his life around.

“I’m glad that everything in my life happened the exact way that it happened because it made me the person who I am,” he said.

“The best way to keep people from ending up in the adult criminal justice system is to reach them when they are teenagers or children heading in that direction."