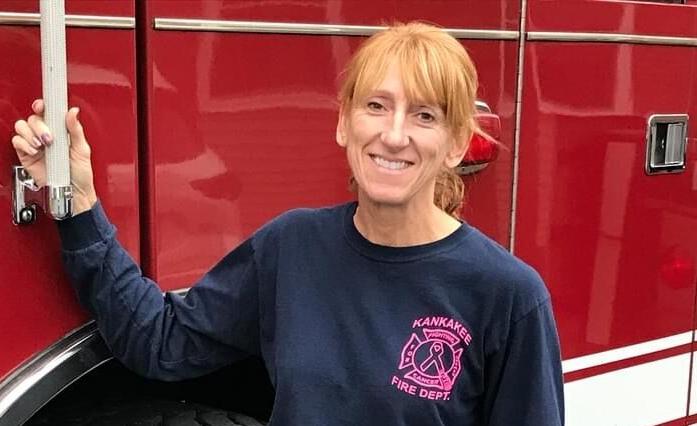 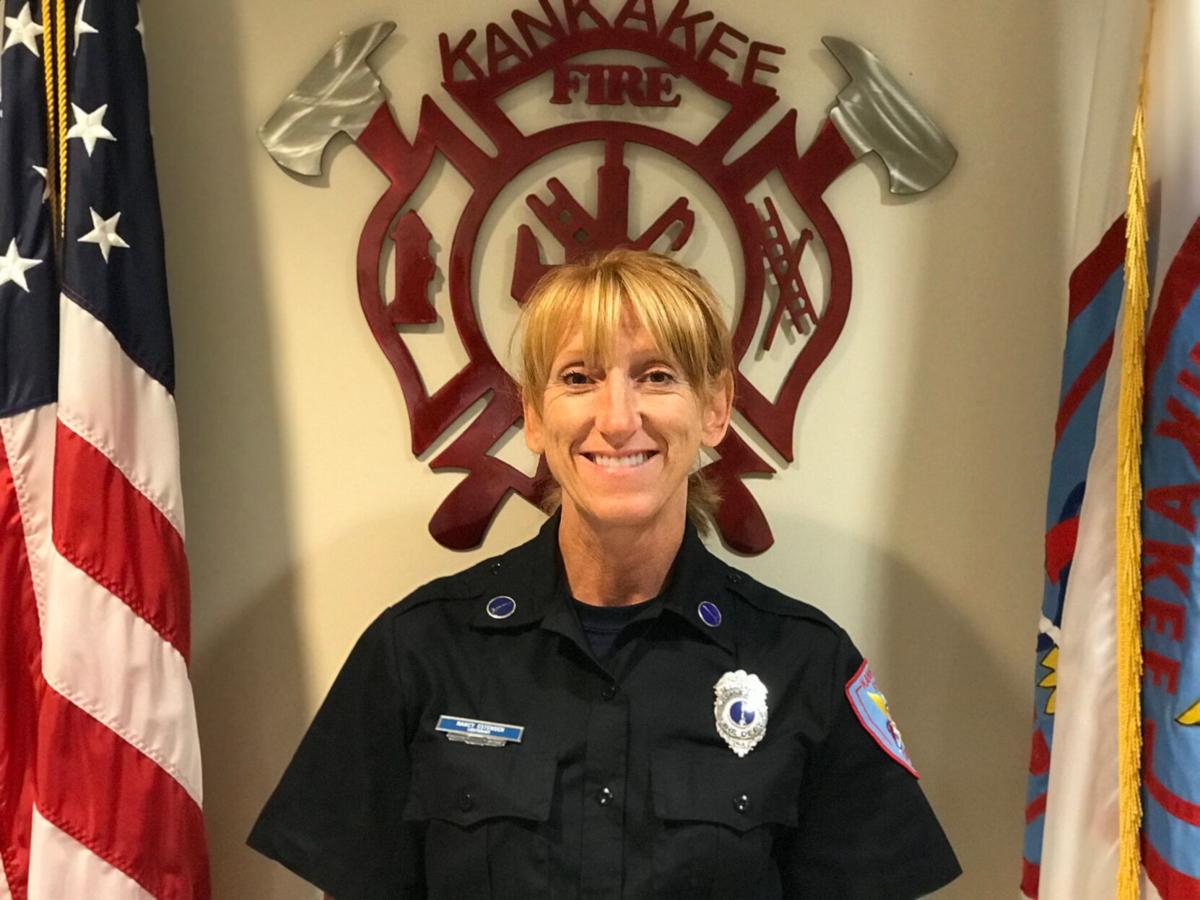 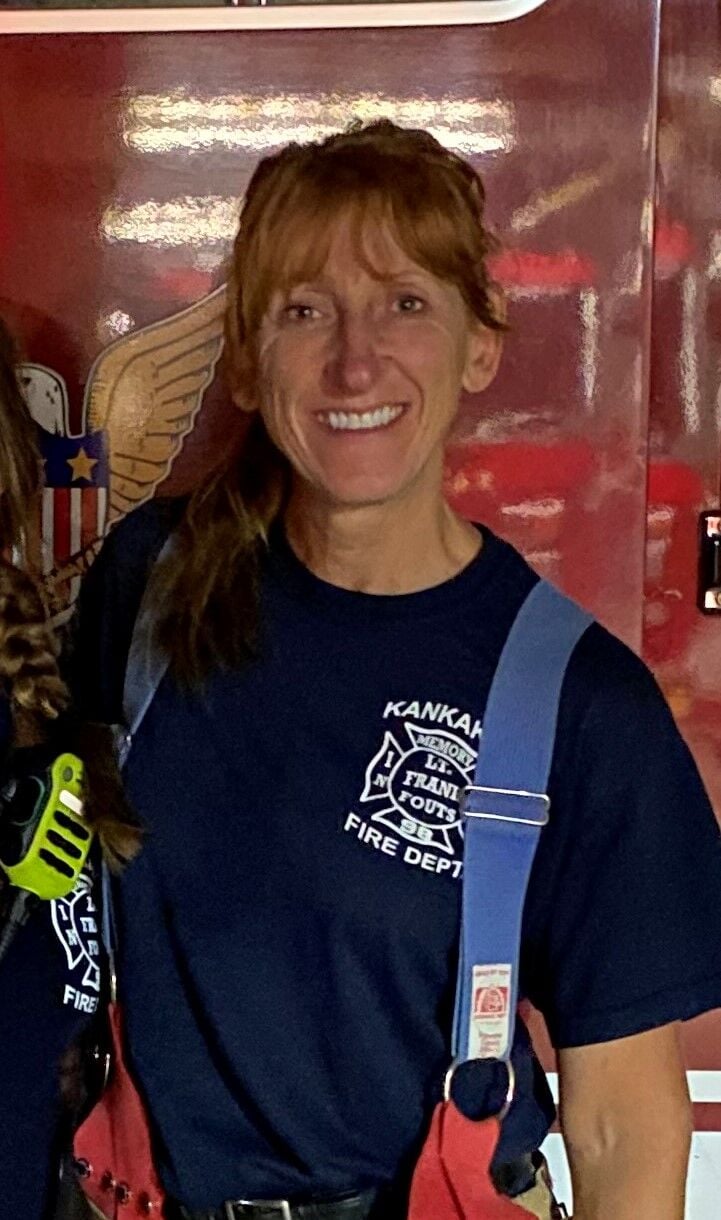 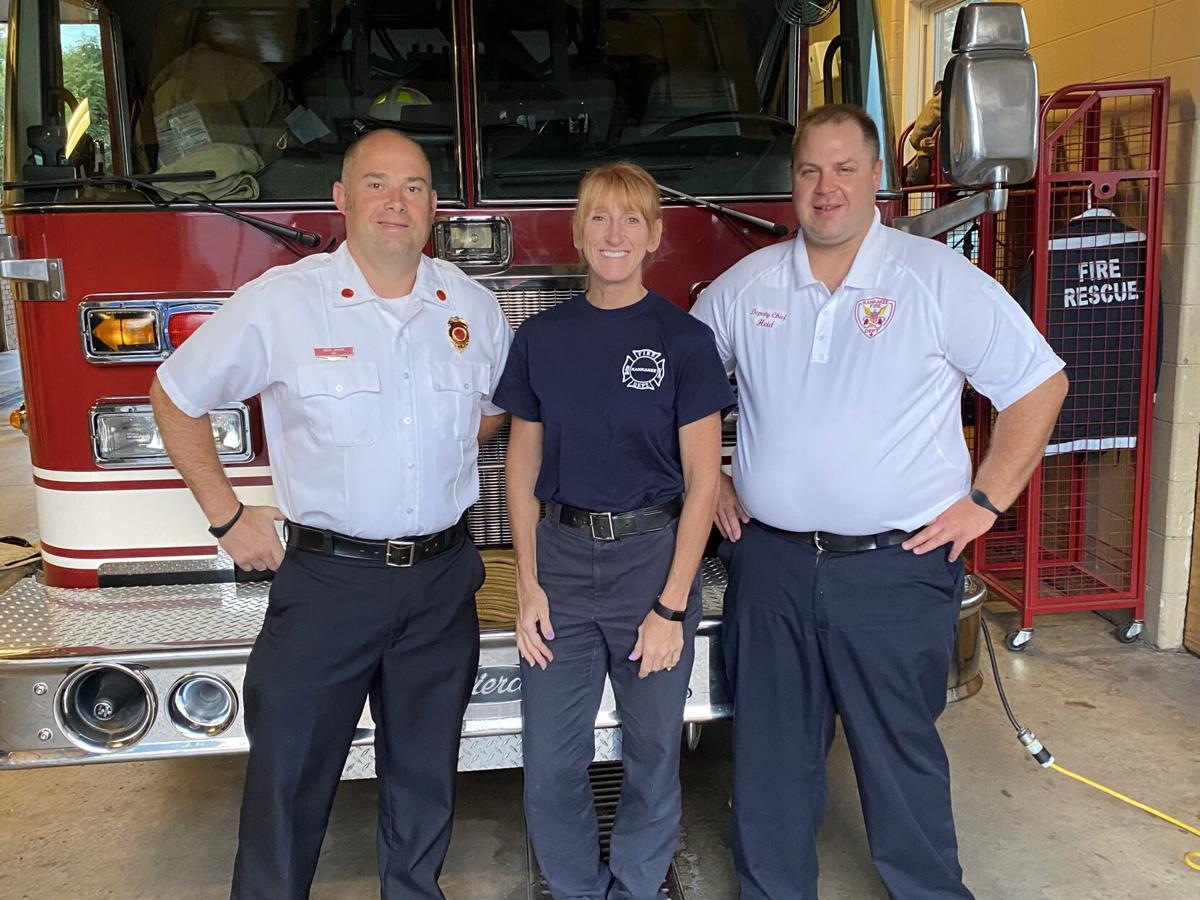 After high school, Nancy Estensen was waiting tables at The Homestead Restaurant in Kankakee and attending classes at Kankakee Community College.

She freely admits upon her 1989 graduation from Bradley-Bourbonnais Community High School, she was more than somewhat lost when it came to what her career path may be.

Packing her course schedule with general education classes until she figured out what she may ultimately study, a friend asked her to take a paramedic class with her.

“I figured why not. I always wanted to do something in health care,” she said.

Kankakee firefighter Jeff Bruno also played a role in her decision. A regular diner at The Homestead, Bruno would see Estensen taking orders and waiting tables. He repeatedly encouraged her to look toward fire protection service as a career option.

Figuring she had little to lose and she had yet to find any other inspiring career path, she decided to go through the testing.

Fast-forward to Sept. 3, 2021, Lt. Nancy Estensen, 50, worked her final shift as a member of the Kankakee Fire Department. The department’s first woman paramedic/firefighter and its first woman lieutenant was ending her career — 28 years to the exact date she started it — Sept. 3, 1993.

Though she had proven herself to be a trailblazer, the somewhat quiet Estensen would rather deflect attention than receive it. She would prefer to be just a cog in the fire service’s engine.

She knows, however, that is not always as easy as it would seem.

Recently honored by the Kankakee City Council upon her retirement, Estensen said she could not have imagined a more rewarding or fulfilling career than the one she had.

Being the department’s first woman was, of course, something she had never put any thought to at that time.

“I was just testing for a job. Being the first woman on the department was not my mission or my goal. Actually, if I knew, that could have scared me off,” she acknowledged.

The youngest of the six children of the late Arthur and Alice Kyrouac, part owners of LK Bottle Gas, fire service was never a part of the Kyrouac family.

Their youngest daughter, thanks to much encouragement from Bruno, changed all of that.

So what was it Bruno saw in the waitress?

“I just saw a true, genuine, sincere person. I didn’t think she was happy with what she was doing,” he said. “I thought she would make a great firefighter.”

He couldn’t have been more spot-on.

“She did remarkable things in her career. I just saw a side of a young lady who could do what was asked of her. And she always gave it her all on the job.”

Count Jen Riordan, now a 20-year Kankakee firefighter, as one who has looked up to Estensen throughout her entire career.

Riordan served with a variety of small-town departments before being hired on with the Kankakee department eight years after Estensen had broken through the barrier.

“She really made it a whole lot easier. She smoothed out the way for us,” Riordan said regarding women firefighters. “I’ve been so appreciative of what she has done to help me along the way. I could ask her about anything.”

The two rarely worked the same firehouse, but they always stayed in contact. Whenever Riordan had a question, concern or simply a rough shift, she could always find Estensen on the other end of the telephone helping her make sense of the concerns.

“She always had a simple message: Never give up. Always finish your assignment,” she said.

While Estensen has only been retired for a little more than a month, Riordan freely admits she already misses her co-worker.

“It’s certainly different with her gone,” she said. “This department is going to figure out real soon all the things Lt. Estensen did.”

And Riordan knows it will fall to her to lend an ear or voice to other women firefighters finding their way. She will be happy to provide both, just as Estensen did for her.

Chief Bryan LaRoche noted there was more to Lt. Estensen than paving a path for women on the city force. She also paved the path for women in departments throughout the region.

Her success, he said, made it easier for others to follow.

“There are not a lot of role models out there like her,” he said.

Like Riordan, LaRoache said it is difficult to watch Estensen walk away.

“She has been a staple with this department,” the chief said.

Being the first woman in the department brought more attention than the then-22-year-old would have liked. Her hiring even made front-page news in the Daily Journal.

“I could have done without the attention. I’m not a spotlight-type of person,” she said.

She did believe that when she was hired under then-Chief David St. John, this was likely her career and not just a brief adventure.

Asked if she would label herself a trailblazer, she said she would not.

“It feels good to hear that,” she said. “I just didn’t see myself in that role.”

She may not have, but others certainly did.

"Since I've been involved, I've seen so many changes. You will be welcomed in," Nancy Estensen said to women seeking a career in firefighting.

Her advice to the younger generation is that they shouldn't overlook the benefits of becoming a firefighter.

"It's a great, rewarding career," she said.

To all, she says, "Set your mind to it and go do it. Don't be intimidated. You can do this if you want."