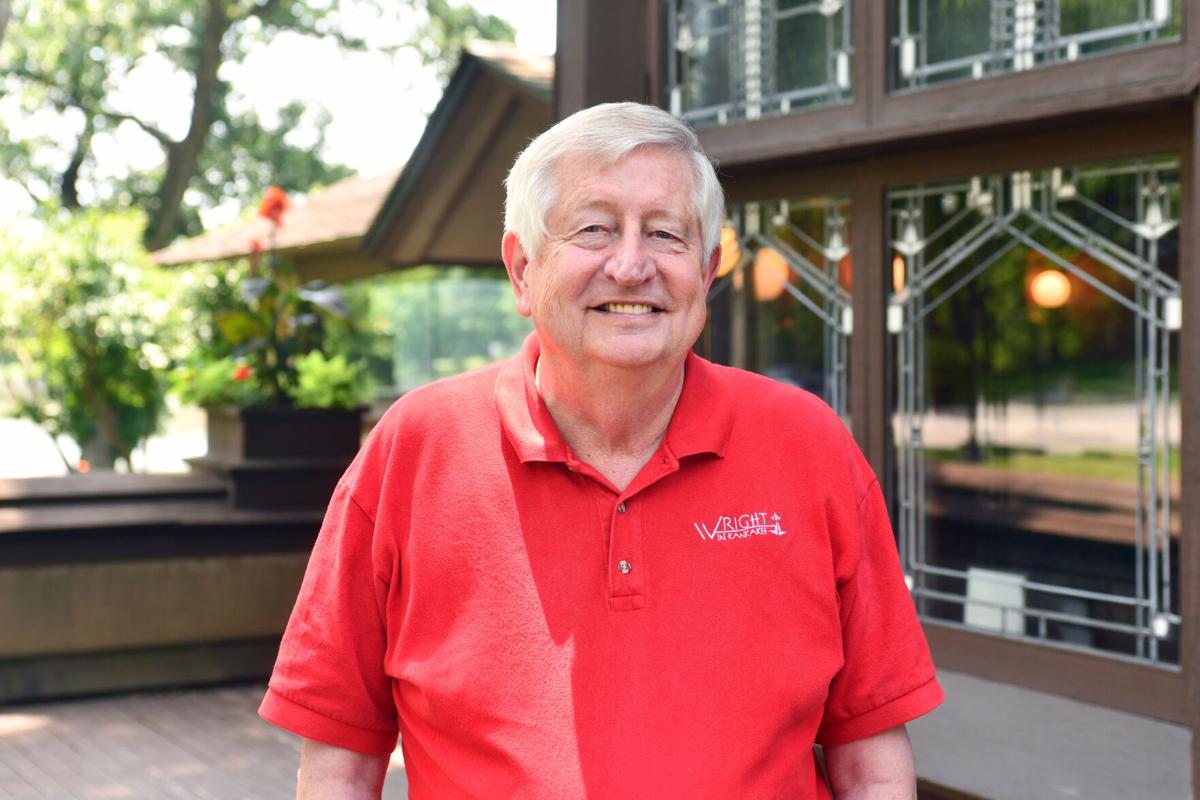 Retired architect Bob Bohlmann, now of Ashkum, is the executive director of the B. Harley Bradley House, also known as Wright in Kankakee. Bohlmann has touched many buildlings across Kankakee County, including work at Olivet Nazarene University and its Centennial Chapel, the Kankakee County Courthouse and administration building, St. Mary’s Hospital and CSL Behring, among many other residential and commercial projects. 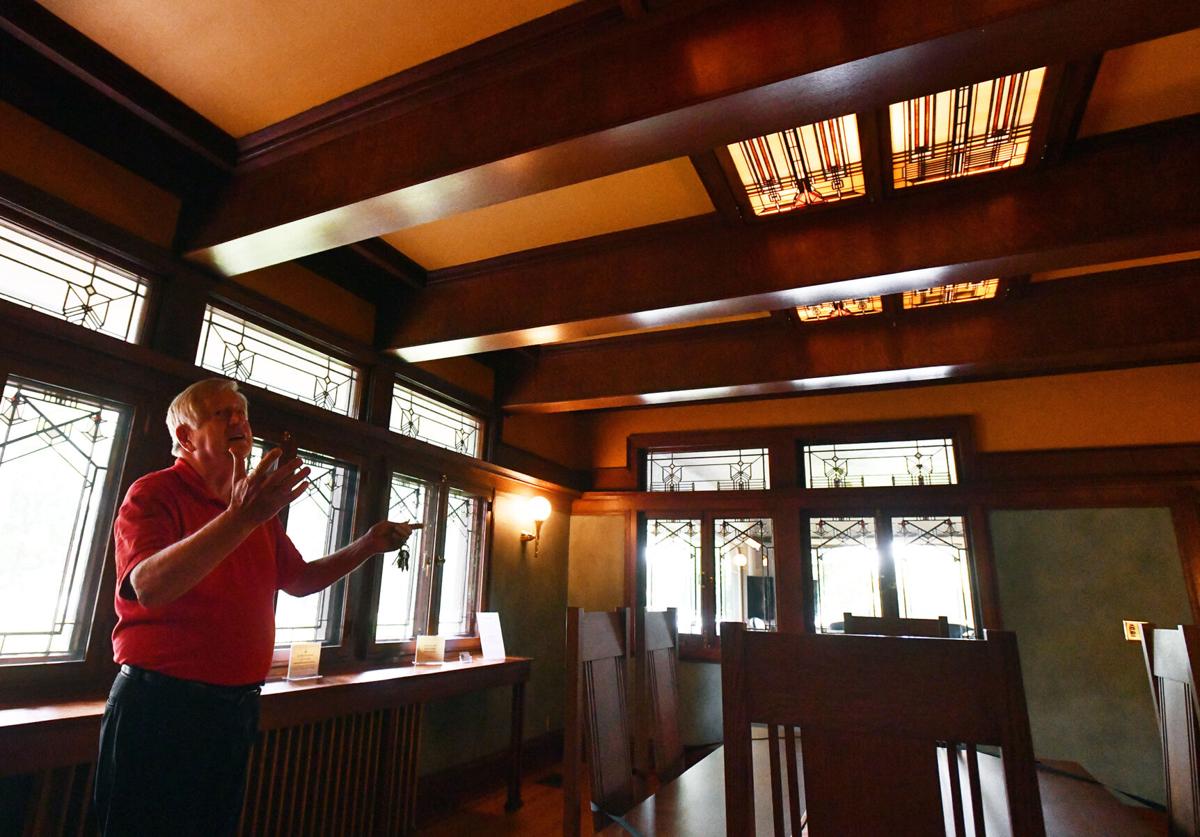 Bob Bohlmann, executive director of the B. Harley Bradley House, also known as Wright in Kankakee, talks about his favorite part of guiding tours — ending in the front living and dining area, which he calls the “dessert of the tour.” Bohlmann accepted the offer to steward the home after retiring in 2016 from running his own architect firm, RGB Architectural Group. READ MORE.

Retired architect Bob Bohlmann, now of Ashkum, is the executive director of the B. Harley Bradley House, also known as Wright in Kankakee. Bohlmann has touched many buildlings across Kankakee County, including work at Olivet Nazarene University and its Centennial Chapel, the Kankakee County Courthouse and administration building, St. Mary’s Hospital and CSL Behring, among many other residential and commercial projects.

Bob Bohlmann, executive director of the B. Harley Bradley House, also known as Wright in Kankakee, talks about his favorite part of guiding tours — ending in the front living and dining area, which he calls the “dessert of the tour.” Bohlmann accepted the offer to steward the home after retiring in 2016 from running his own architect firm, RGB Architectural Group. READ MORE.

When Robert Bohlmann was in junior high, he was introduced to tools used for drafting, and it was like finding the missing piece to a puzzle.

Upon learning that architects used these tools on a daily basis, Bohlmann decided right then and there that he was going to be an architect.

Spending the first decade or so of his life living in Sheboygan, Wis., Bohlmann quickly learned the importance of hard work. He also learned how to fix many different things with just his hands. It was in the Kankakee area that those hands picked up the tools for drafting and set off a chain of events that would lead him to ITT Technical Institute before becoming a successful architect.

Bohlmann began working as an architect in 1970 before starting his own firm RGB Architectural Group in 1994.

“I had a little fun with the name. I’m a computer geek and when computer screens and even televisions first came out, there was RGB — red, green, blue, which are also the primary design colors,” he explained. “It also happened to be my initials.”

He would later retire in 2016, right before receiving the opportunity to become the executive director of the B. Harley Bradley House — also known as Wright in Kankakee — which was built in 1900.

“It keeps me busy, it’s a lot of fun and it keeps my wife happy — I’m not home,” Bohlmann said with a laugh, mentioning that his home in Ashkum was built the same year as the B. Harley Bradley House. “This is kind of like home away from home.”

Not only is he in charge of maintaining and sharing the story of Frank Lloyd Wright’s first prairie house, but he is also using this role as a way to serve the next generation of architects and designers.

After taking over as executive director, one of his first projects was clearing and organizing the clutter from the basement. He then noticed the stone-lined walls and how that was similar to other designs of Wright’s and was inspired to turn the basement into an area of learning.

One section of the basement is set up with drafting tables and another section is set up for design [equipped with stained-glass crafts]. With this, Bohlmann has schools come in for field trips so students can learn hands-on what it’s like to be part of an architectural team. They take turns learning about architecture, interior design, structural design and engineering.

His goal with this is not only to teach about a process that’s near and dear to him, but also let kids know that teamwork is a component of success.

“I could be the world’s greatest architect and have the most beautiful drawings, but if I didn’t have an ironworker, a mason, a carpenter, an electrician to build my design, who cares how good of an architect I am?”

Bohlmann has certainly made his mark on Kankakee County as he’s worked on major building projects in the area. One of his favorite clients was Olivet Nazarene University.

“Olivet was like family,” he said. “Just the way they treat people, meetings would open with prayer. Very congenial and just a class act.”

He was brought on by Dr. A. Leslie Parrott near the end of the president’s tenure in late summer, as they were looking for something to go in front of a residence hall and a gym. He was told that the building had to be done by homecoming, which was November 1, giving him 90 days to get everything done.

“We poured the last small piece of concrete Thursday night and homecoming started Friday,” Bohlmann recalled, saying that the building became known as “Red Square” due to the red concrete pattern.

Additional projects he worked on in his 30-plus years with ONU included Centennial Chapel, the masonry entrances into ONU with the eternal flame, the admissions center, Weber Center, remodeling floors in the Burke Administration building, two additions to Ludwig Center, work on locker rooms when the Chicago Bears first came to town and the final project was with Reed Hall of Science. He also worked on the alumni center which is rumored to have been originally worked on by an intern of Frank Lloyd Wright’s.

Bohlmann’s local work didn’t stop with the university. He did all of the drawings for the county’s administration building in Downtown Kankakee. He also worked in the 1909 courthouse, which was originally designed by Zachary Taylor Davis — the man responsible for Comiskey Park (now Guaranteed Rate Field) and Wrigley Field.

The courthouse was built with four floors but only two were set up for use. When it came time for Bohlmann and his team to do some redesigns, he had the brilliant idea of taking the virtually untouched marble from the fourth floor and using it as the base for the first level’s flooring.

“Working at the courthouse was trying to bring the old-world character back to the modern design,” he said.

Additionally, RGB worked with St. Mary’s Hospital, including the O.B. suite, as well as CSL Behring. Some of his favorite memories were going to the grand openings of his buildings and seeing people take it all in.

“I was fortunate, I had quite the career for a single practitioner,” he said. “I always tell people I never worked a day in my life. I love what I did, I couldn’t have been anything else.”