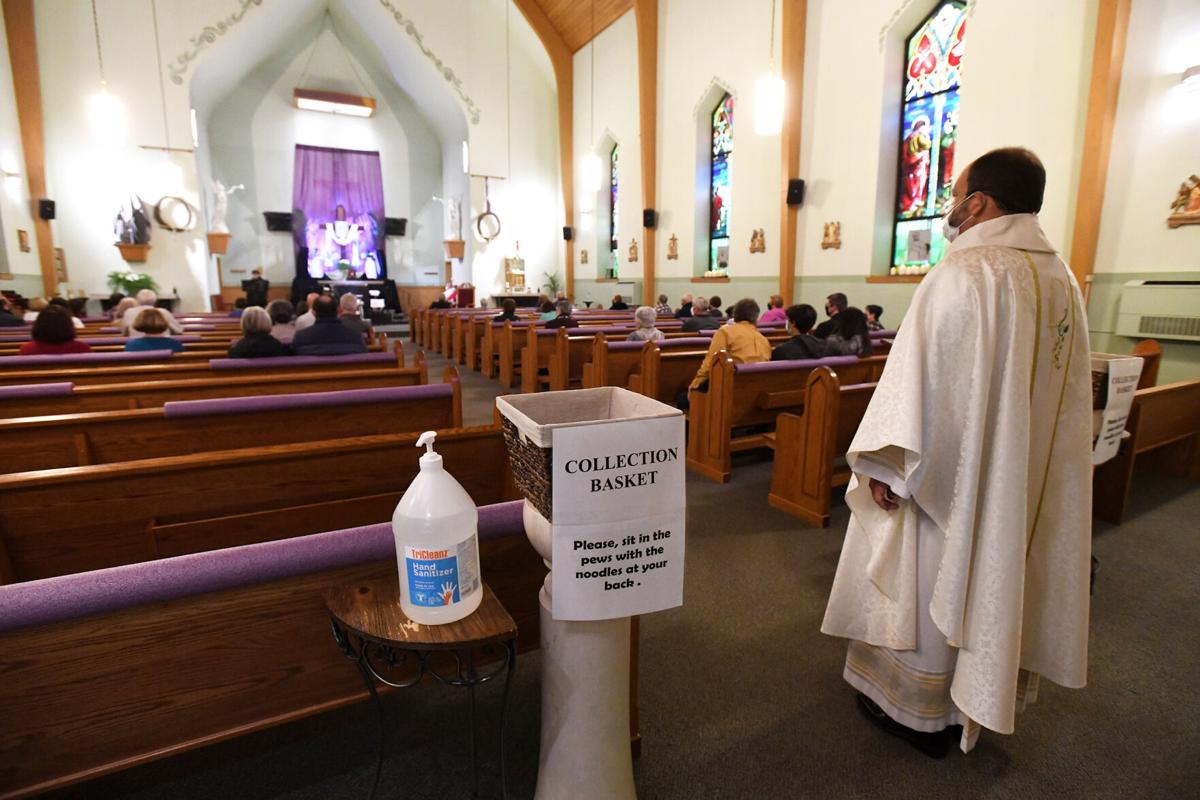 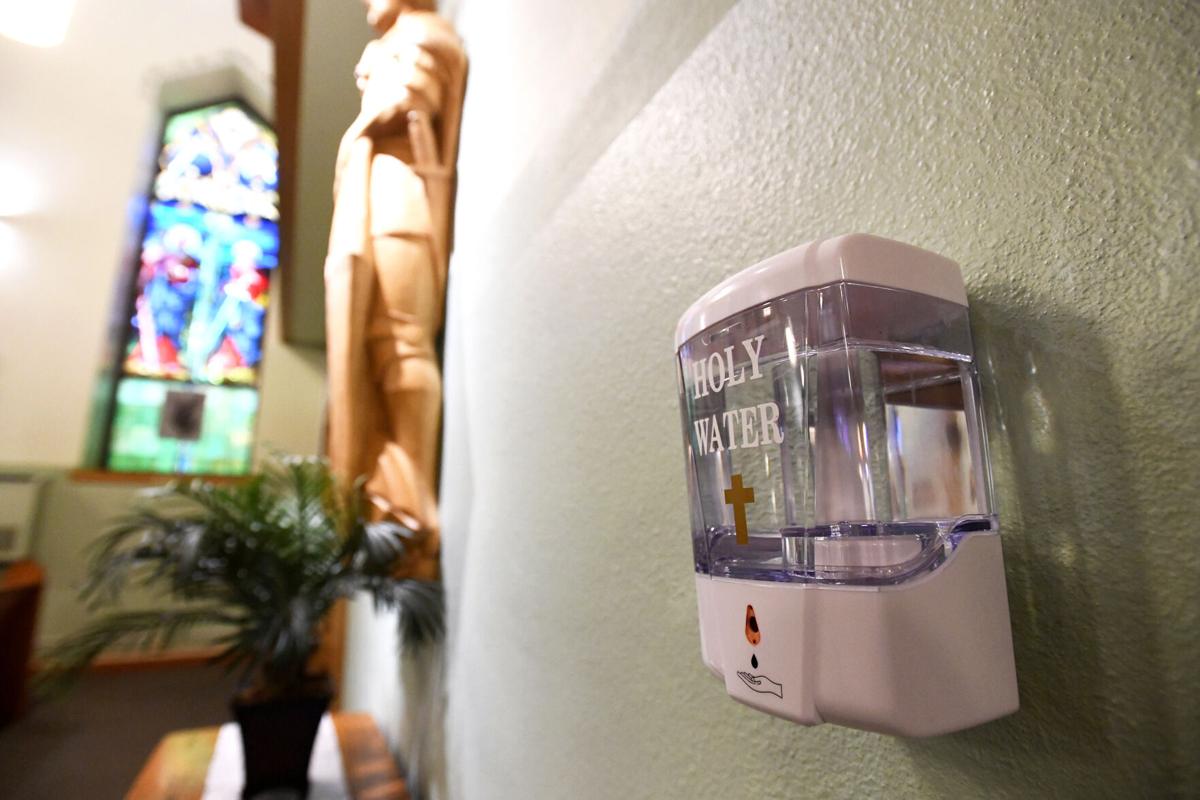 A holy water dispenser is one of many coronavirus precautions in place at St. George Catholic Church in Bourbonnais. 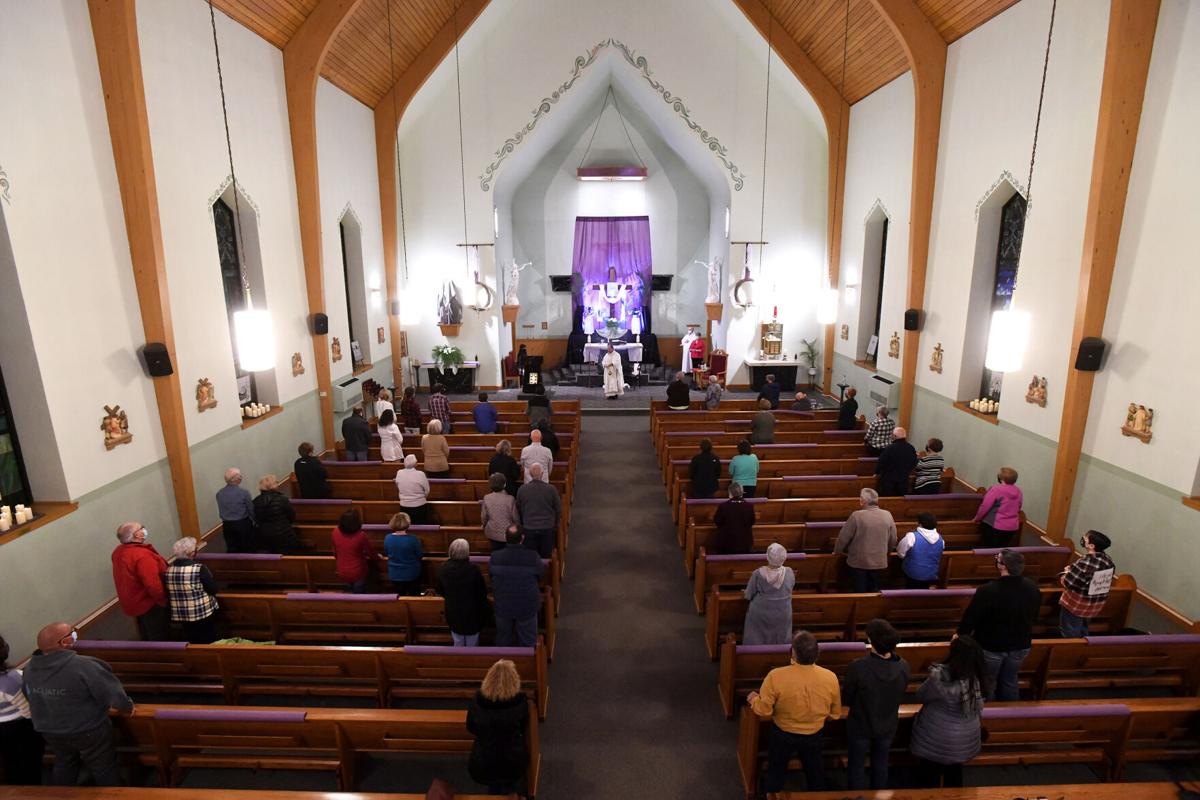 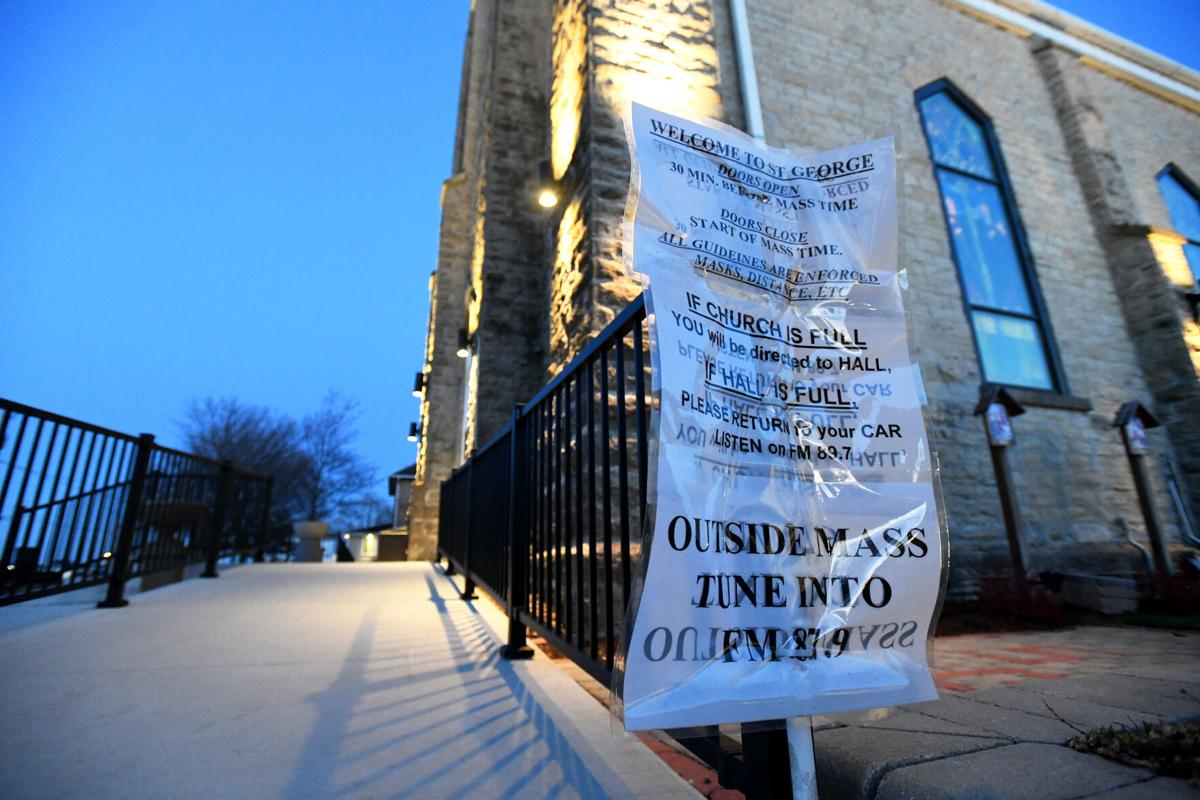 Signs outside of St. George Catholic Church in Bourbonnais on Thursday denote coronavirus guidelines for Mass and how to tune into the sermon on the radio if the church is at capacity.

A holy water dispenser is one of many coronavirus precautions in place at St. George Catholic Church in Bourbonnais.

Signs outside of St. George Catholic Church in Bourbonnais on Thursday denote coronavirus guidelines for Mass and how to tune into the sermon on the radio if the church is at capacity.

Pastor Lori Holmes has no more information than any other person when it comes to how many or who will walk into her church on Easter Sunday morning.

The pastor of Caldwell Chapel A.M.E. Zion Church in Kankakee is unsure of what to anticipate Sunday as she celebrates the Easter service.

Whatever that answer may ultimately be Sunday morning, there is one thing Holmes knows for sure: Church services have been forever altered due to the COVID-19 pandemic.

“Certainly the church, in my opinion, will not look like the church it once was,” Holmes said. “There is a new norm. A new look to the church or church service.”

Holmes is eagerly anticipating Easter Sunday. Her church has basically not had an in-person service since the state shut down these gatherings in March 2020. She also is eager to see who and how many people return.

Worship services have largely been limited to Zoom or Facebook platforms.

“I don’t know,” she said. “I don’t know who will come. With virtual worship having reached more folks, I anticipate many doing Sunday virtually. There are so many people still not ready.”

It is not a matter of people having lost their faith. It’s more likely they have found alternative ways to satisfy their yearning for the faith.

With Easter — the highest point of Christian religious year — the question on many minds within the church is will people rise up and return to the church, a place many have not entered since the pandemic began?

In Bourbonnais, Senior Pastor Mark Quanstrom, of the College Church of the Nazarene, noted, like Holmes, this weekend will be their first return to in-person services.

He said masks will be worn and social distancing will be required. And people will be back inside the church.

“Easter is the Sunday we are starting back. This past year has reminded people of the importance of church,” he said.

For Easter 2020, College Church was empty, just as every other church was.

He believes people have a great desire to return.

“Church isn’t an event, it’s a community. It’s our culture. Church is a longing for people who want to return,” he said.

Quanstrom noted in March 2020, the public was told this societal separation would only be temporary, perhaps only a few weeks.

It turned into months and months turned into a year. His church moved to streaming its services online. They added a second Sunday service when some services returned in the summer, before they were once again halted when positivity rates spiked.

A traditional church service can do more than bring people together once again. Church can also help usher in some sense of normalcy.

A Pew Research Center survey conducted in April 2020 found people planned to return to church once restrictions were lifted.

A just-released Gallup poll found that U.S. religious membership has fallen to just 47 percent among those surveyed, meaning less than half of the adult population belonged to a church for the first time since Gallup began asking this question more than 80 years ago.

As recently as 1999, 70 percent of poll respondents stated they belonged to a religious congregation. Catholics have the seen the greatest decline, with an 18-point drop in the two decades, double the 9-point decline for Protestants.

Maternity B.V.M. Pastor Dan Lydon said the staff and parish members at Bourbonnais church are doing everything they can to ease parishioners concerns and welcome them back.

When they will ultimately return is a question he certainly can’t answer.

He said personnel basically sanitize the facility after each service. Even though the church has seating for 480, its pandemic capacity is set at 125 for each of its four weekend masses.

To date, parishioners are required to call ahead to reserve a seat. He is looking forward to when that practice is a distant memory.

But forecasting the future regarding when the bulk of the congregation will return is something he can’t answer.

“We know people still have the faith,” Lydon said. “We are following the [COVID restriction] rules put in place, but we are certainly wondering when this will end. We just don’t know. We are waiting it out.”

In another part of the county, Pastor Thomas Thenech, of St. Joseph Catholic Church in Manteno, remains confident people will return.

“People will come back. That’s my belief,” he said. “I know some may stop coming, but once this challenge of the pandemic is gone, people will be back.”

He estimates about 40 percent of the congregation has been participating in on-site services in recent months.

“I know some people are hesitant right now,” he said. “Once these COVID restrictions are lifted, people will be back.”

"This past year has reminded people of the importance of church."