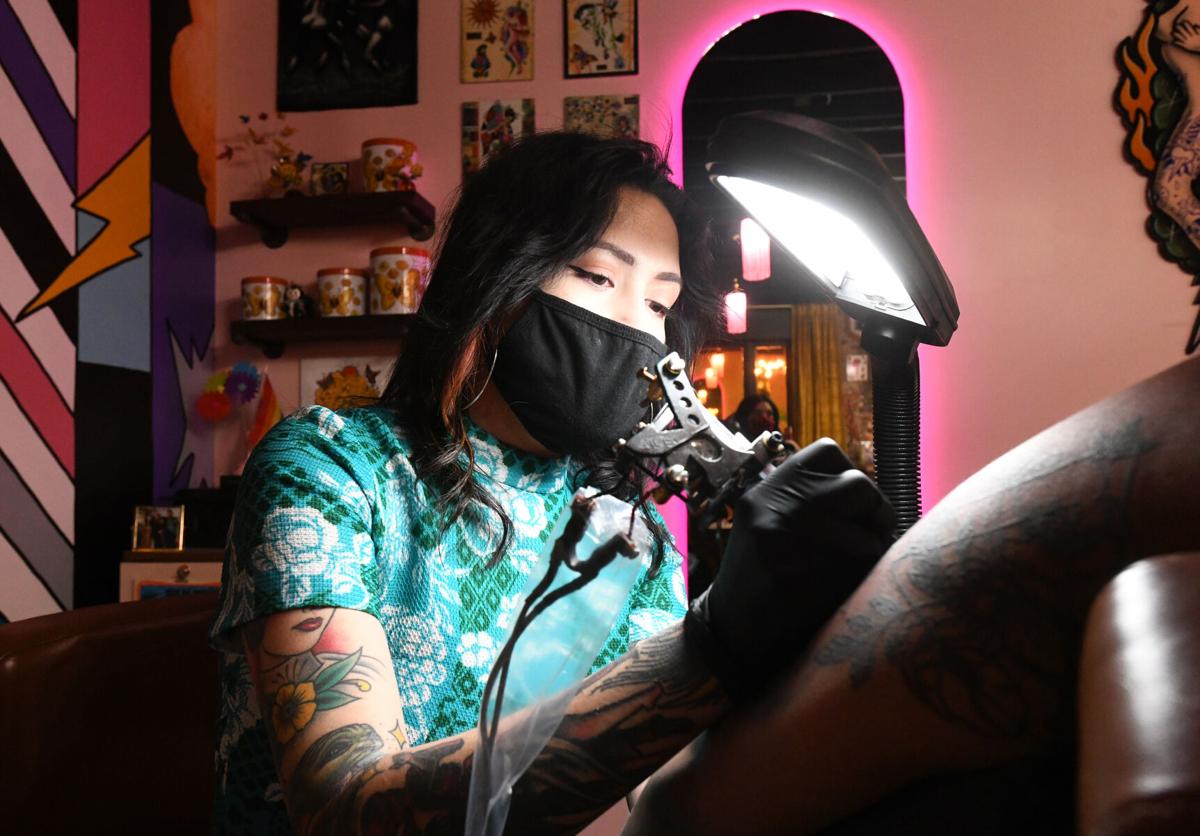 Bri Haug, owner of tattoo shop Electric Lady Lounge, works on a tattoo for client Jess Wright, owner of Urban Barbershop, on Wednesday morning. Wright, and most recently Haug, operate their businesses out of the Burfield & Remington in downtown Kankakee. READ MORE. 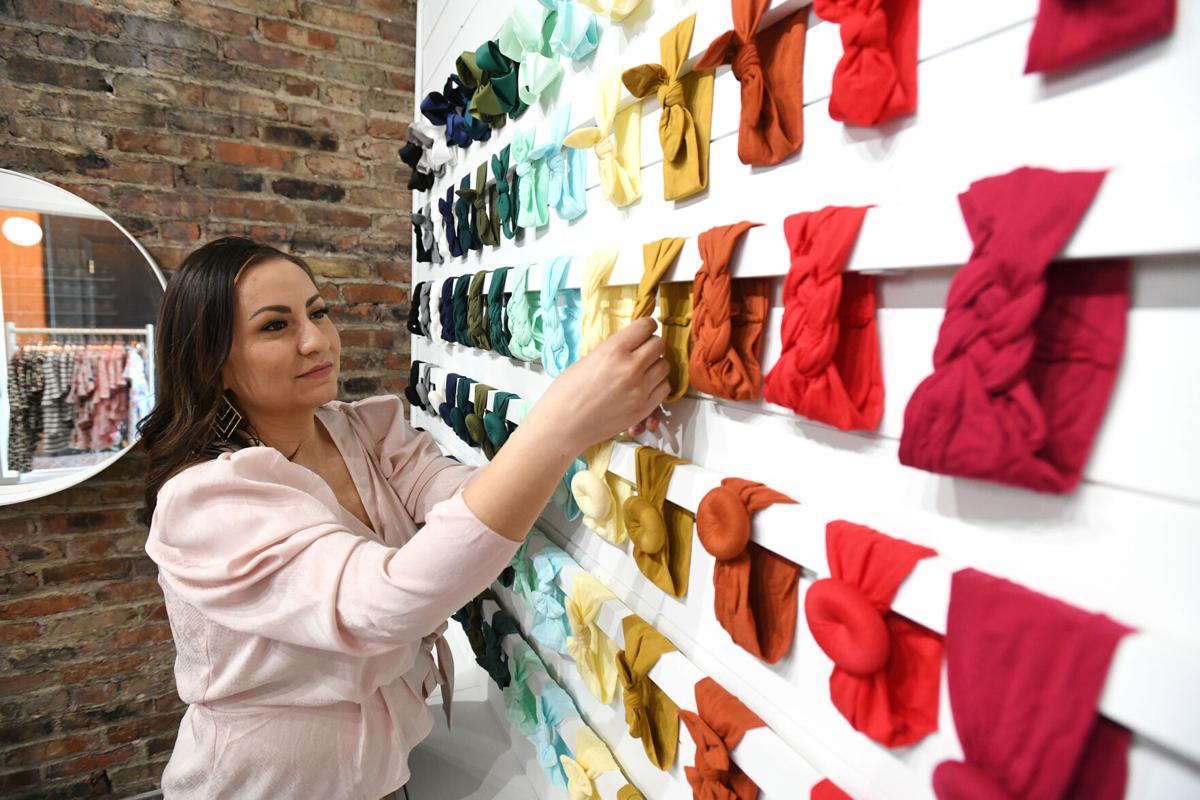 Maria Ochoa, owner of Sprinkled with Glitter, straightens items on the headband wall at her shop, one of the newest boutiques to open at the Burfield & Remington in downtown Kankakee.

Bri Haug, owner of tattoo shop Electric Lady Lounge, works on a tattoo for client Jess Wright, owner of Urban Barbershop, on Wednesday morning. Wright, and most recently Haug, operate their businesses out of the Burfield & Remington in downtown Kankakee. READ MORE.

Maria Ochoa, owner of Sprinkled with Glitter, straightens items on the headband wall at her shop, one of the newest boutiques to open at the Burfield & Remington in downtown Kankakee.

It was shortly after 2 p.m. Tuesday and Bri Haug, owner and operator of Electric Lady Lounge, was finally able to catch her breath.

The 32-year-old Bourbonnais resident had created tattoos on nine customers since she opened her shop for the first time in the 350-square-foot shop on the second floor of the Burfield + Remington building, 150 N. Schuyler Ave., in downtown Kankakee.

“I’m the only woman-owned tattoo shop in Kankakee County,” she proudly boasts. She has been working in the tattooing business for three years and clearly has a gift for applying ink to skin.

There is at least one other woman-owned tattoo shop in Kankakee County. Margaret Spence of Bradley has been the owner of Roger's Tattooing in Bradley since January.

Another is Maria Ochoa, owner of Sprinkled With Glitter, an approximate 220-square-foot girl’s boutique which offers apparel for those between the ages of newborn to early teens.

Ochoa, 35, who works full time for Apple as a field merchandiser, said opening this store had long been a dream.

“I wasn’t sure if I was ready, but [building owner] Terrance [Hooper] pushed me a little and he said I could do this,” she said, adding that she is thankful for that shove.

A Hispanic, she noted this is not the type of store people associate with Hispanics. She said most people expect Hispanics to operate a grocery store or restaurant featuring Mexican foods.

The two first-time business owners are part of a group which has led to the approximate 30,000-square-foot retail center to be nearly 100 percent occupied. The 8,000-square-foot Majestic banquet hall hasn’t been occupied much within the past year due to the pandemic, however, but the brother-and-sister Kankakee-based owners team of Terrance Hooper and Amy Rauch hope the tide has turned on the stalled banquet business.

Hooper freely admitted when he took over the former Majestic building and banquet hall in downtown Kankakee he and Amy were very much learning on the job.

At the time of their purchase, Hooper had been operating the Grapes & Hops Wine Bar for about four years.

But both admitted they were taking a leap of faith together when they signed on the dotted line.

There are many young business operators grateful the Hooper-Rauch duo took on this challenge.

Another person grateful is Brad Kuntz, president of the Kankakee Development Corp.

“There is definitely some momentum there. I love the variety of businesses. There are service business, retail, some food. It’s been a while since new retail opened in downtown Kankakee,” Kuntz said. “It’s interesting to see how small businesses are opening during the pandemic. ... These businesses are helping to contribute to the unique setting the downtown has to offer.”

Hooper, 44, noted he has one space yet to fill on the second floor. He noted seven tenants have signed leases since August.

He thinks maybe the pandemic and the uncertain times of some 9-to-5 jobs are pushing people to create their own futures.

The building has nine, first-floor occupants and five locations on the second floor.

“I knew I had a way to connect with entrepreneurs,” he said. “I am one of them. Who is willing to make an investment in them? That’s me. I started with no money, just an idea.

“I knew this place would work. I just didn’t know where these entrepreneurs would come from, but I knew there would be some,” he said.

He also works with them. He coaches them along the way. They often meet as a group to discuss a variety of issues.

The one constant message he tries to deliver is nothing matters if the businesses person is not willing to invest their time.

“Ideas mean nothing without dedication and work. People must be willing to put in the effort and the time. ... I’m not a babysitter, but I am something of a therapist.”

And he doesn’t mind. Many tenants acknowledge Hooper is the reason they sought out Burfield + Remington.

Hooper is flattered and humbled.

“This location used to be known as the place where businesses came to die,” he said. “We’re changing that conversation.”

United Way of Kankakee and Iroquois Counties has launched Women United, a women’s affinity group that works to improve the lives of women and girls through service and socialization.

The owner of two Bradley hotels has entered into an option to purchase the former Carson's men's store with the goal of transforming it into a convention center and banquet facility.