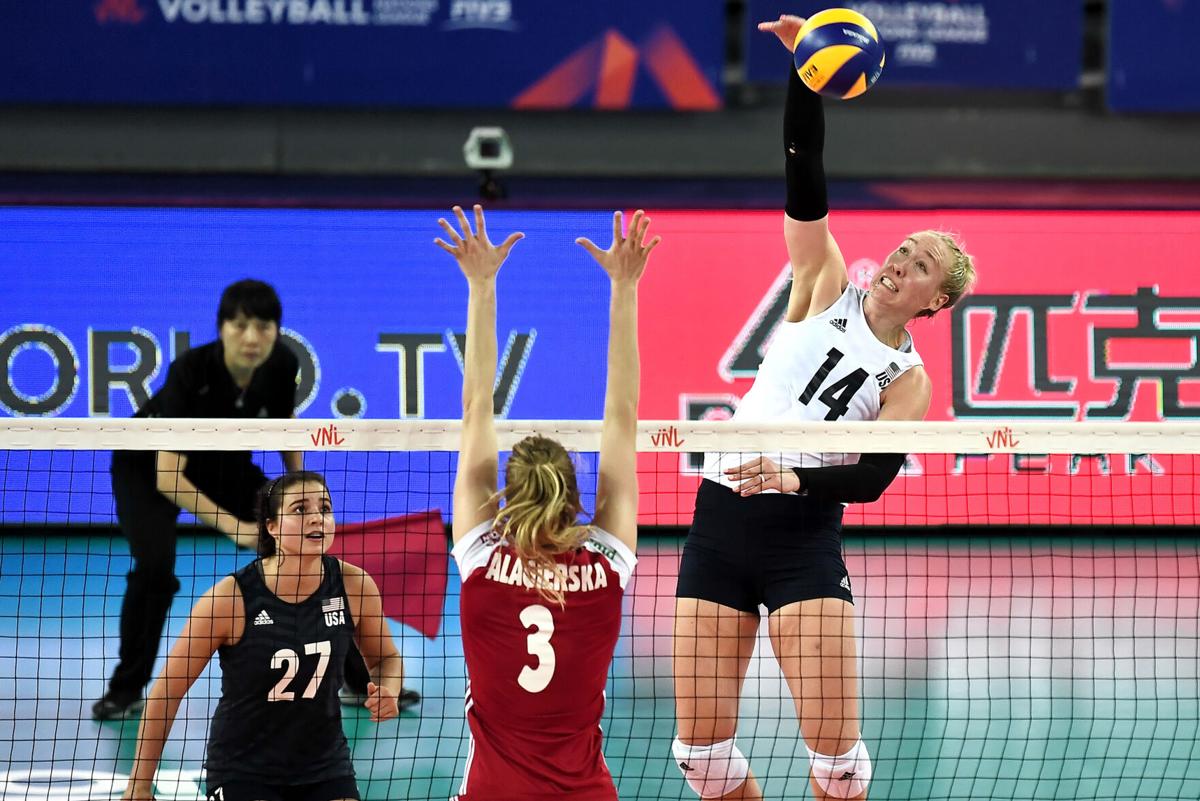 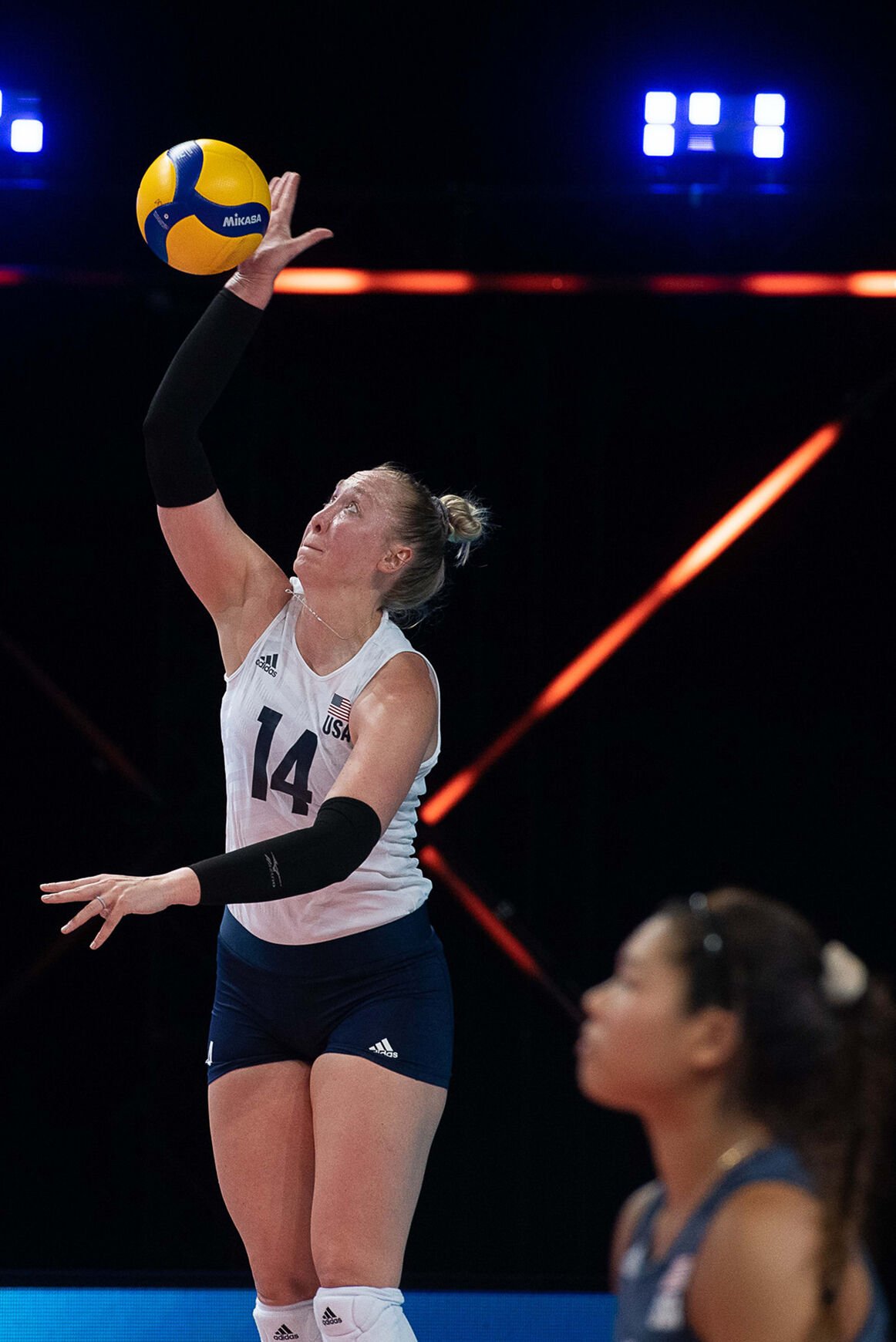 Michelle Bartsch-Hackley serves during a match against Italy at last month's FIVB Nation's League Final Round in Italy, where Bartsch-Hackley was named best outside hitter and MVP. Bartsch-Hackley, a member of the U.S. women's volleyball Olympics team, is the wife of Bradley native Corbin Hackley. 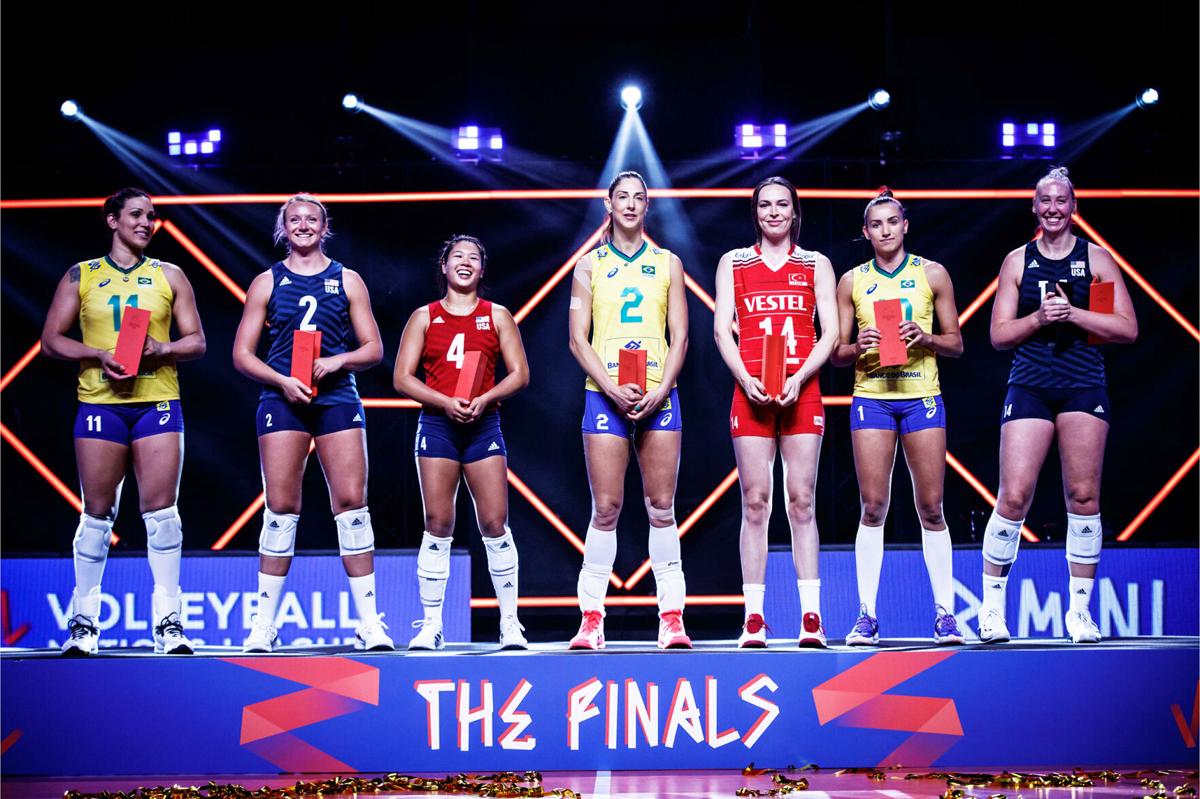 Michelle Bartsch-Hackley, right, is recognized as the best outside hitter and MVP of last month's FIVB National League Final Round in Italy. Bartsch-Hackley, a member of the U.S. women's volleyball Olympics team, is married to Bradley native Corbin Hackley. 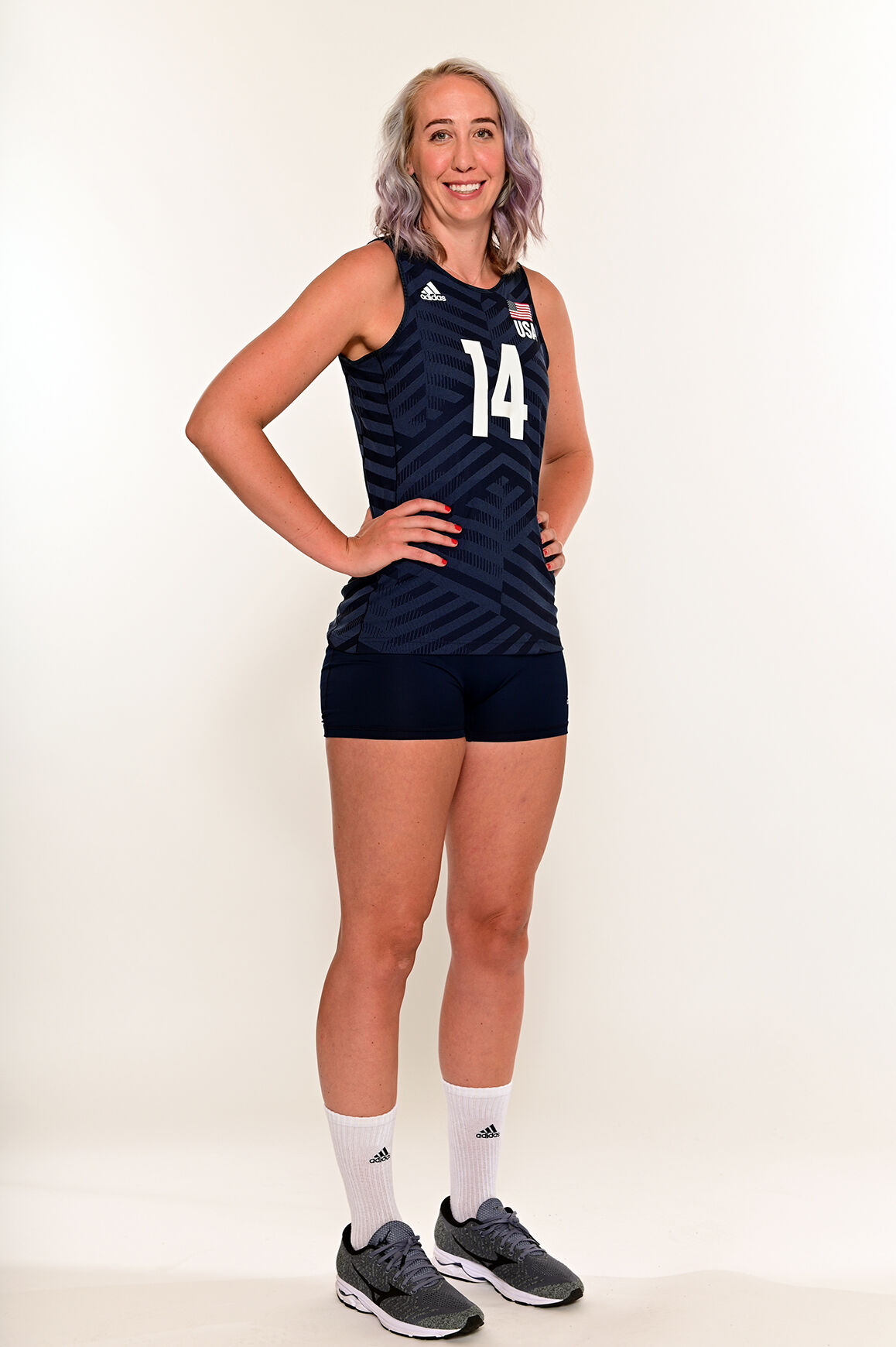 Michelle Bartsch-Hackley serves during a match against Italy at last month's FIVB Nation's League Final Round in Italy, where Bartsch-Hackley was named best outside hitter and MVP. Bartsch-Hackley, a member of the U.S. women's volleyball Olympics team, is the wife of Bradley native Corbin Hackley.

Michelle Bartsch-Hackley, right, is recognized as the best outside hitter and MVP of last month's FIVB National League Final Round in Italy. Bartsch-Hackley, a member of the U.S. women's volleyball Olympics team, is married to Bradley native Corbin Hackley.

After earning several awards in her senior season at the University of Illinois in 2010-11, when the Fighting Illini reached the NCAA Division I National Championship, Michelle Bartsch-Hackley has been living proof that sports can provide opportunities not otherwise provided.

A well-seasoned traveler, the Collinsville High School graduate and wife of Bradley native Corbin Hackley has enjoyed a fruitful professional career at the international level, with her biggest moment to begin when she makes her Olympics debut Sunday.

Bartsch-Hackley, a 6-foot-3 outside hitter, was an alternate for the U.S. women’s volleyball team at the 2016 Rio Olympics. When COVID-19 postponed the 2020 Tokyo Olympics to this summer, Bartsch-Hackley had to wait an additional year to officially reach her goal of representing the United States at the world’s biggest sporting event after serving as an alternate showed her it was a realistic possibility.

“I think after being an alternate in 2016, I grew hungrier because I was so close at that time,” Bartsch-Hackley said. “The past few years I’ve tried to take every opportunity and use it to grow and improve.”

A professional in five different countries — Puerto Rico, Germany, Italy, China and Turkey (where she currently plays) — Bartsch-Hackley is no stranger to representing Team USA in international play. She’s been a member of the national team for six years, earning spots on the women’s collegiate, women’s junior and girls youth national teams, according to her Team USA bio.

Although the Olympics are a whole new stage, and eight of the 12 Americans in Tokyo are Olympic newcomers, including fellow Illini graduate Jordyn Poulter, Bartsch-Hackley said the team’s focus isn’t much different than usual.

“I think for us it’s similar to any other tournament,” Bartsch-Hackley said. “We’re super grateful to be playing.”

The team was not allowed to be together at all in 2020, meaning fall 2019 was the last time the team had seen each other before ramping up for Olympic play in recent months.

“We understood the importance of postponement and used the extra time to prepare off the court ...” Bartsch-Hackley said. “We knew we had to grow our relationships off the court and become closer.”

The team is entering the games — which they begin with a 9 p.m. match Sunday against Argentina — fresh off of a gold medal at last month’s FIVB Volleyball Nations League Final Round, where Bartsch-Hackley won the Best Outside Hitter and MVP awards.

When the Olympic team was revealed at the beginning of June, players had the option of a meeting or an email to learn their fate. Bartsch-Hackley decided on the latter option, finding out she had accomplished her lifelong goal through her husband’s voice as he read her the email.

It took Hackley what felt like an eternity to scroll past a lengthy letter to reach the roster, which only listed players’ initials, adding another layer as Hackley finally revealed to his wife she made the team.

“Once I saw MBH, I had to check a thousand times to be sure I was seeing straight,” Hackley said. “I then broke the news to her, and we were both in shock.

“Like this is real; this is happening. It was a rollercoaster of emotions.”

The couple wed eight years ago and have been together for more than 10 years, with Hackley sticking right by his bride’s side as she has traveled the world through the lens of volleyball.

“Corbin has been amazing; we both didn’t know I’d be playing this long, but 10 years of professional volleyball and he’s been with me through it all,” Bartsch-Hackley said. “He’s moved and visited to at least six or seven different countries to watch me play and support me.”

Hackley has been fortunate enough to accompany his wife during the majority of her career and usually serves as the team photographer and proudly wears the title of “house husband.”

“I take care of everything so Michelle can focus on what she does best,” Hackley said. “With two practices a day and rehab a few times a week, this is more than a full-time job, which is why I have food waiting for her when she comes home.”

Because of the COVID-19 pandemic, this year’s Olympics are the loneliest games to date, with no friends, family nor fans allowed, leaving Hackley to watch his wife from a world away. Bartsch-Hackley and the team departed for the games last week, and the couple has gone back to their routine of whenever Hackley is stateside while Bartsch-Hackley is playing overseas — waking up a few hours before the match for a quick text or phone call, napping until gametime, and then back to bed after the match.

“I am so excited for her to be living her dream she has worked so hard for, and yet it sucks I cannot be there physically,” Hackley said. “She knows, though, that she can call or text me any time of day, and I will be there.”