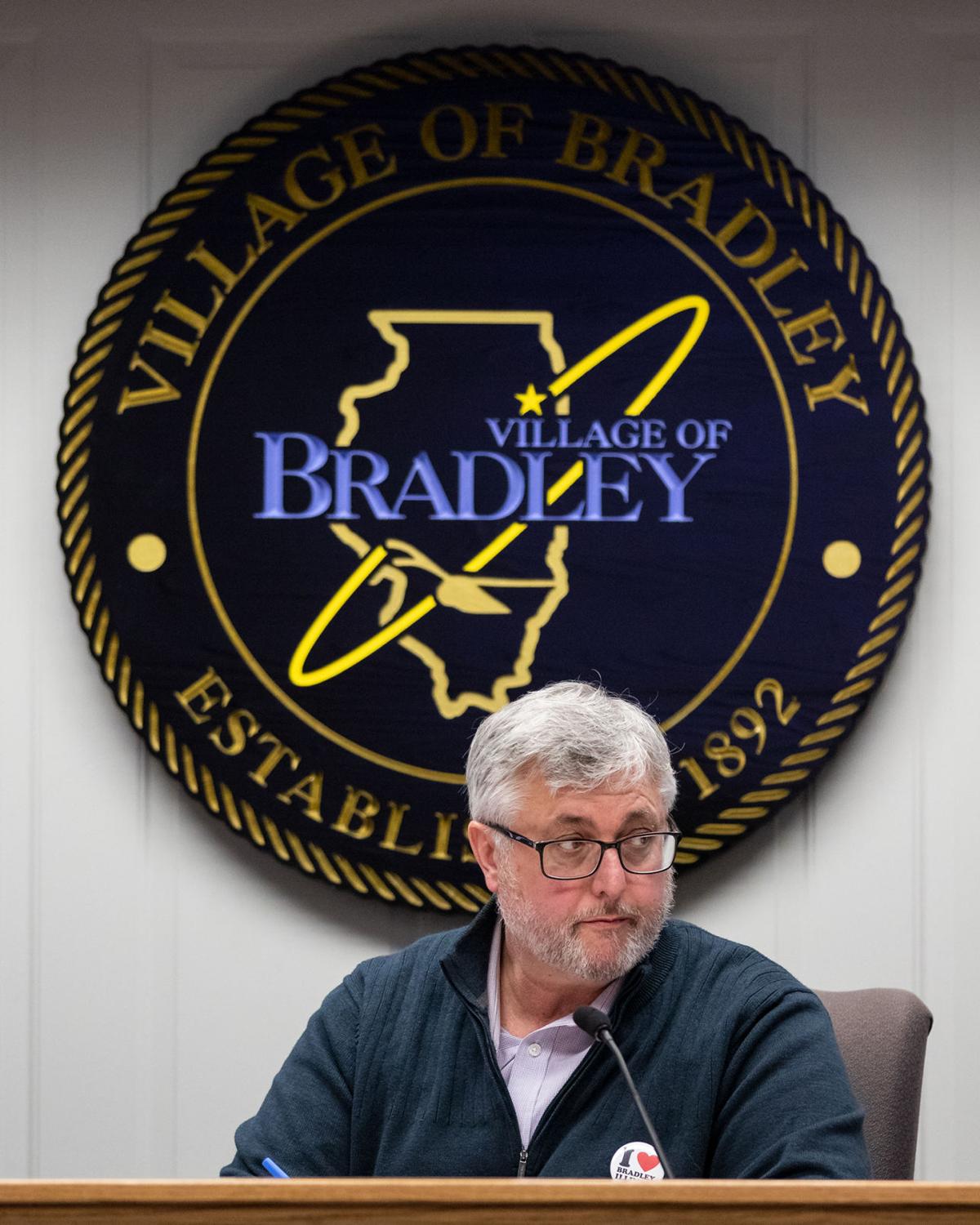 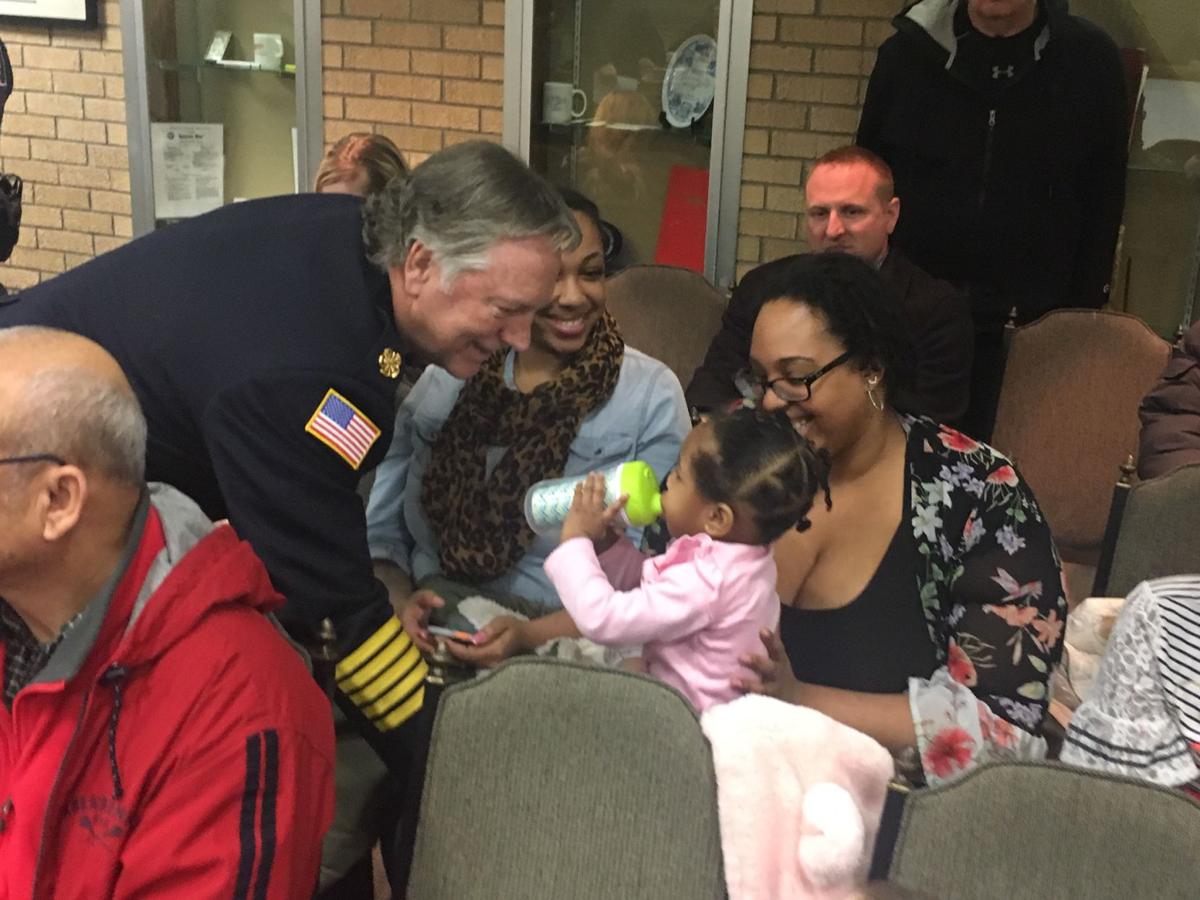 Bradley Fire Chief Jim Eggert shares a moment with 1-year-old Spencer Moore during a village board meeting in February. Spencer was being held by her mother, Simone Roberts. Roberts said she was “forever grateful” to the police officers and firefighters who saved her child’s life.

Bradley Fire Chief Jim Eggert shares a moment with 1-year-old Spencer Moore during a village board meeting in February. Spencer was being held by her mother, Simone Roberts. Roberts said she was “forever grateful” to the police officers and firefighters who saved her child’s life.

BRADLEY — With the exit of its interim fire chief, Bradley is planning to make changes to improve the fire department, the mayor said this week.

But Mayor Mike Watson did not address questions about who is in charge of the department and what its relationship will be with the neighboring Bourbonnais Fire Protection District.

One idea reportedly under consideration is putting Bourbonnais Fire Protection District Chief Ed St. Louis in charge of the Bradley department for the time being.

Six months ago, the village hired Jim Eggert as interim fire chief for six months, telling him he could stay another six months if the village was still searching for a permanent chief. The cost over the six months was $66,000.

Eggert's last day was June 28, yet no new chief has been named. Watson, who was appointed mayor in late April, said the village decided against renewing Eggert's contract because of its cost.

"This decision was tough; however, the board feels confident that we can collaborate locally and source leadership that is more economical," the mayor said in his statement, which was issued shortly after 9 p.m. Tuesday.

Throughout the day Tuesday, it was unclear who was in charge of the Bradley Fire Department. At least one member of the department was under the impression that St. Louis had already taken the helm.

Asked about this, St. Louis said in a brief interview, "You need to talk to (Village Administrator) Catherine Wojnarowski. They need to tell you who is in charge. They need to answer that question."

It was a question that village hall officials did not answer. About 2:30 p.m. Tuesday, Wojnarowski said the village would issue a statement shortly.

In an interview, fire Capt. Kevin Goudreau, the Bradley Fire Department union's president, said he and fellow Capt. Greg Glidewell were in charge until they were told differently. They are the department's highest-ranking members.

"I haven't been told Chief St. Louis is in charge. We are running day-to-day business as usual," Goudreau said.

On Tuesday night, department employees were scheduled to meet with St. Louis and village officials. Goudreau said St. Louis may well be named the Bradley department's chief for the time being. He said this may be part of a larger consolidation between the two departments.

Union members, Goudreau said, are not opposed to consolidation, but they feel "blindsided" about the village's latest actions. If the village fire department consolidates functions with Bourbonnais, it would require a village board vote, Goudreau said.

"The last three mayors have done nothing for the fire department. We were hoping Mr. Watson was going to do something, but I'm not sure this is the way to go. (Consolidation) needs to be done legally and properly," Goudreau said.

With six full-time employees, the department handles 3,000 calls a year, nearly doubling its workload since it became a full-time department 15 years ago, Goudreau said.

For months, the union has been negotiating with the village for a contract to replace the one that expired April 30.

In his statement, Watson said he was "saddened" by past mayoral administrations' failure to follow the bulk of recommendations by the Illinois Firefighters Association, which assessed the department in 2005.

Among the recommendations were a significant increase in staffing, an addition of a second fire station, close cooperation with other fire departments and improvement of software to measure performance.

"Upon taking office as a trustee and now acting mayor, I have had limited exposure to the details of the severe gaps in our fire department," Watson said. "However, being fully aware of the seriousness, I am committed to finding a solution."

He added, "In light of repeated past administrative budget deficits, this will not be easy."

In his interview, Goudreau praised the service of Eggert, who has decades of experience as a chief and deputy chief in the Chicago suburbs.

"He was putting us in the right direction," Goudreau said. "We were dumbfounded his contract was not renewed."

Area fire departments, Goudreau said, help each other with calls. Bradley needs a lot of assistance because of its small staff, so the village appreciates Bourbonnais as a partner, he said.

But he said Bourbonnais wants an agreement where it would handle all calls north of Armour Road.

"We don't want to turn those calls over because we would be losing revenue," Goudreau said.

The areas north of Armour Road include a higher percentage of privately insured customers, which mean higher reimbursements, he said.

Goudreau said it would be better if Bourbonnais backed up on calls regardless of the neighborhood.

"I saw improvement. (Eggert) was only there for six months. You can't accomplish a lot in six months, but I thought he was on the right track," Redmond said.

He said his understanding from village hall was that St. Louis would take the helm of the local department temporarily.