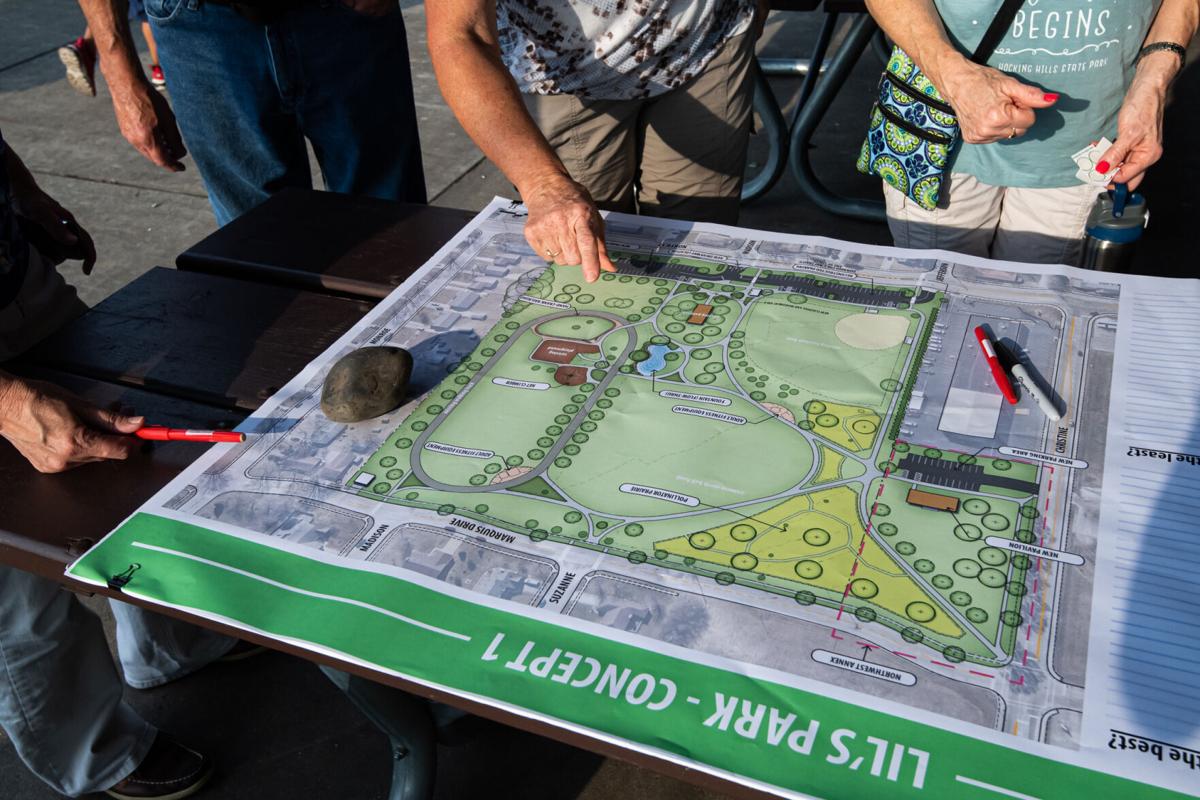 Residents gather around visual aids representing proposed improvements to Lil’s Park in Bradley on Wednesday. The village hosted a public meeting in the park to hear from residents about possible upgrades. 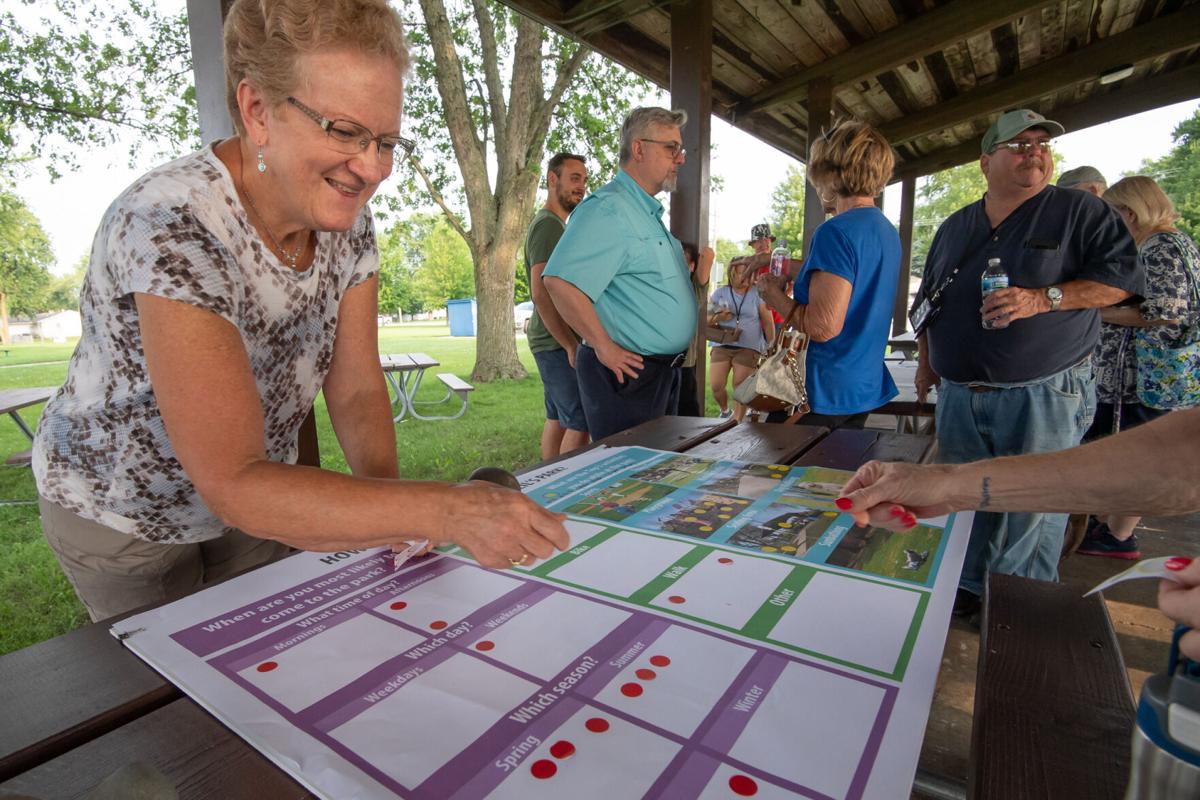 Ruth Tomlinson of Bradley offers her input on what upgrades she would like to see made at Lil’s Park. READ MORE.

Residents gather around visual aids representing proposed improvements to Lil’s Park in Bradley on Wednesday. The village hosted a public meeting in the park to hear from residents about possible upgrades.

Ruth Tomlinson of Bradley offers her input on what upgrades she would like to see made at Lil’s Park. READ MORE.

The Brooklyn, N.Y., transplant and expectant mother, however, would like to see improvements made within the village before she decides if this will be the place she calls her longtime home.

Rorabaugh was one of about 30 village residents who attended Wednesday’s open house at Lil’s Park regarding potential upgrades to Bradley’s top park.

The village, along with its landscape consultant, Teska Associates of Plainfield, held its first public forum to determine what, if any, upgrades people want to see at the approximately 15-acre park located along East North Street.

Count Rorabaugh among those in favor of upgrades — in particular, early proposed plans for a splash pad at Lil’s Park — within the village’s 14-park system.

“For sure,” she said as she stepped away from the table displaying basic concepts of a possible splash pad. “This park is premium space, but it’s underutilized. As a future mother, these options would make me want to stay. This is exciting. Next summer I could be dipping my baby’s feet in the water.”

The vast majority of Wednesday’s onlookers appeared to share much the same sentiment regarding investment into the park.

The village has discussed committing $300,000 to $500,000 toward Lil’s Park upgrades. This investment would likely be just the first of what could be at least a few sizable fiscal commitments here and within other village parks.

The meeting on this beautiful mid-July evening likely encouraged village officials that they are moving in the right direction.

Village Public Works Director Terry Memenga, who has been spearheading park upgrades, could not have been more pleased with the number of residents who attended and the interest they expressed in seeing upgrades.

“As of right now, this [splash pad] is just an idea. But I think a lot of people that came here this evening want to see a positive direction taken,” he said.

He said if all goes as hoped, it is not out of the question that a splash pad could be in operation as early as summer 2022.

Lil’s Park has many features, including two baseball/softball fields, a much-used pavilion, a playground and several other features. It is far from an undeveloped park.

The village, however, is looking to take it to a much different level. Those words are what many residents want to hear.

Carol Moore, who described herself as a 20-year village resident, said other neighboring communities — notably Kankakee and Manteno — have water recreation features and she wants Bradley to join the list.

She said children need places to play and Lil’s needs to be made into a place that is more alluring.

“This needs to be a place where kids can be kids. We have to make this a community where people want to come. This park has to be a good one. Let’s make Bradley appealing to other areas so they come here,” she said.

Bradley Mayor Mike Watson said the village will also seek Open Space Land Acquisition and Development grants in an effort to expand investment into the park.

“I think the public wants to see improvements — village-wide. But money must be spent wisely. The splash pad won’t be the last addition here, but it’s a start,” he said.

Residents were asked to select the upgrades which they felt the park needed. The table featuring the splash pad seemed to gather the most attention.

Jodi Mariano, a principal with Teska, said the development is much more than just placing a splash pad within the park. She said where it is located within the park is also important. She said whatever additions are made to the park they must complement what the park already offers.

Quinn Meadows, 14, of Bradley, who will be beginning his freshman year at Bradley-Bourbonnais Community High School later this summer, said he visits the park at least once a week with friends.

He noted they mostly sit and talk because there aren’t many things for them to do here. He labeled the splash pad as a “great idea.”

“I would use it. But there definitely needs to be more here,” he said.

Daniel Metesh, a 36-year village resident, said with the amount of taxes people pay, there should be more features.

“I’m all about upgrades so I get some return on my taxes,” he said.

"This needs to be a place where kids can be kids. We have to make this a community where people want to come."

The Village of Bradley is on a mission to transform Lil’s Park and its 15-acre setting along East North Street as the village’s top park and seeks input from residents.

Construction could begin as soon as mid-summer.