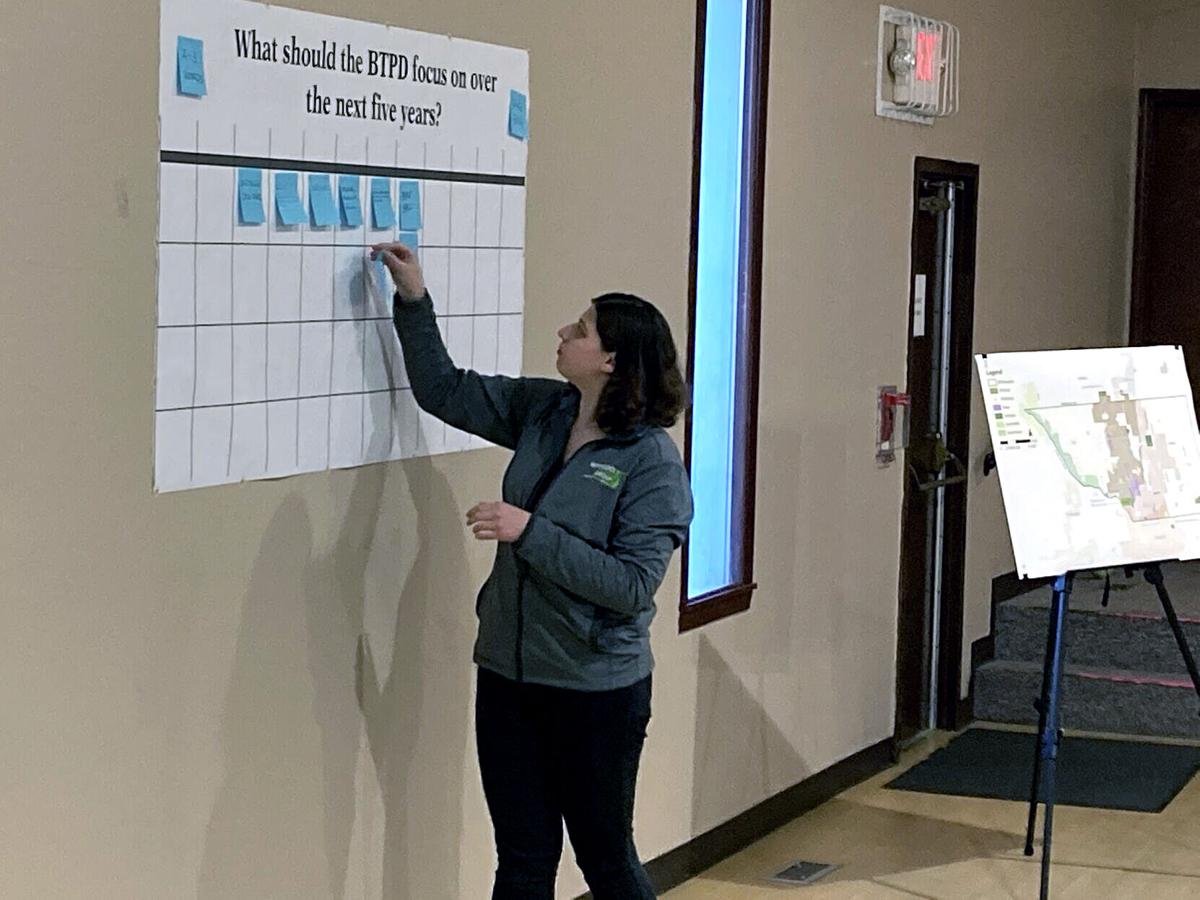 Bridget Deatrick, of Hitchcock Design Group of Naperville, posts some wants and wishes jotted down on sticky notes by Bourbonnais Township residents during a brainstorming session for the park district on Wednesday at Recreation Station in Bradley. 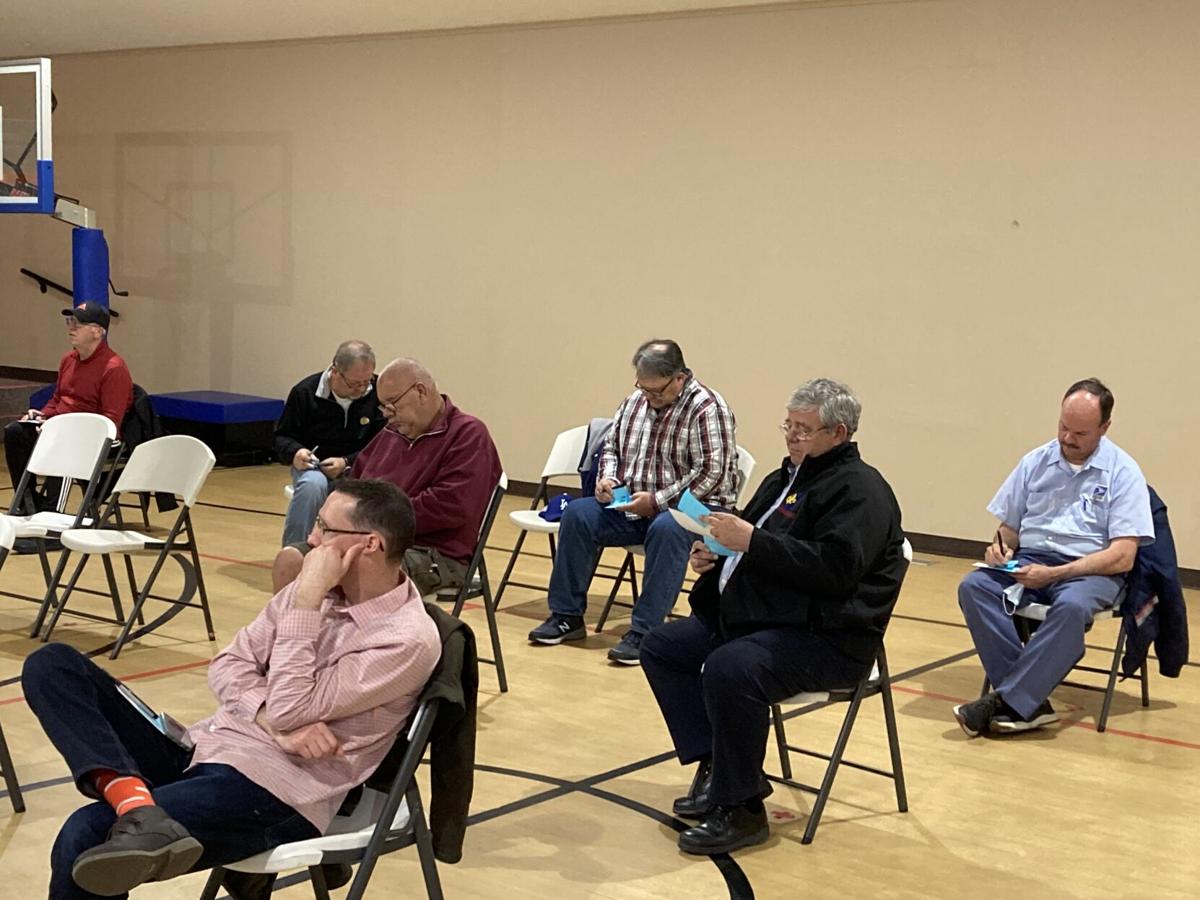 Bridget Deatrick, of Hitchcock Design Group of Naperville, posts some wants and wishes jotted down on sticky notes by Bourbonnais Township residents during a brainstorming session for the park district on Wednesday at Recreation Station in Bradley.

BRADLEY — What does Bourbonnais Township want out of its park district? That was the question Wednesday night at Recreation Station in Bradley where the Bourbonnais Township Park District was conducting, in conjunction with Hitchcock Design Group of Naperville, a workshop for residents.

“We want your ideas,” said Bridget Deatrick, senior associate with Hitchcock, to the dozen or so township residents in attendance. “We’re not just talking about physical facilities but also programs and special events.”

Deatrick along with Andy Howard, a principal with Hitchcock, prodded those in attendance to write down ideas, wants and needs.

“This is a brainstorming session,” Howard said.

Deatrick and Howard had the residents write down at least three ideas on sticky notes, and they were all posted on the board that read “What should BTPD focus on over the next five years?”

Hitchcock Design Group has been contracted by the district to put together a comprehensive plan for BTPD. Something its executive director Hollice Clark said is long overdue.

“We’re excited about doing this,” Clark said. “The last time this was done was in 1992. The staff is very excited to give an opportunity to tell the board what they want. That’s what it comes down to — what the people want.”

In addition to Wednesday’s community meeting, a 15-minute survey can be taken and submitted online at btpd.org.

Some of those at the meeting made it clear they want to see pickleball courts.

“We enjoy it,” said Dwight Lockwood, of Bourbonnais, who was there with his wife, Linda. “We go down to Chebanse. They’re a much smaller community, and they have three outdoor courts and two indoor courts. In the past we’ve had to drive all the way up to Manhattan and Frankfort, so we’d like to see something here.”

Linda Lockwood said the sport is growing in popularity.

“In Florida, that’s all you see is pickleball courts,” she said. “They’re pretty elaborate, so we just like it to see it.”

BTPD has pickleball courts in the planning stages at its Diamond Point Park.

Dave Panici, of Bourbonnais, said his main interest was pickbleball, too.

“I’m an aging baby boomer and pickleball is a quite popular sport,” he said. “It’s very good for seniors, it’s a very good for social [activity]. I think it would be, in this community, a phenomenal draw around the area.”

Other ideas or wishes brought up in the meeting were:

• Partnerships with other public entities

• Intramural sports for all ages; teen and middle school programs, especially in the summer

“This is going to be a long process,” Deatrick said.

Howard said the process of compiling all the survey results will last into June and July, and Hitchcock Design Group will present the information to the board.

“This is an all-inclusive process and we want to include as many people in the community as possible,” Howard said. “… We’re really starting to see some common threads that start to be a higher priority.”

Clark really emphasized spreading the word about taking the survey.

“Tell your friends and neighbors,” Clark said. “This is a way that we can communicate with you to know what you want out of your park district. This is your opportunity to speak your mind to tell us what you want.

“In addition, once they have completed the comprehensive plan in July or August, we will have a whole copy of the plan on our website to browse through at your convenience,” Clark said.

Panici said he wished there would’ve been a bigger turnout at the meeting.

“Maybe there will be once word gets around [about the survey],” he said. “Hollice is right. We all have a stake, and it’s good to have input into what is our community.”

A 15-minute survey can be taken and submitted online at surveymonkey.com/r/planBTPD.

Pickleball is a sport that combines many elements of tennis, badminton and ping-pong.

It's played both indoors or outdoors on a badminton-sized court and a slightly modified tennis net. Players use a paddle and a plastic ball with holes.

Played as doubles or singles, it can be enjoyed by all ages and skill levels.

Anyone associated with the Kankakee Valley Park District from employees and staff to commissioners and executive director will tell you, "It's a long time coming" for Splash Valley Aquatic Park.

As reopening of Splash Valley Aquatic Park nears, the Kankakee Valley Park District is seeking bids on refurbishing the three slides at the facility.

The Bourbonnais Township Park District board elected officers for the term at the commissioners meeting on Monday at the Exploration Station.