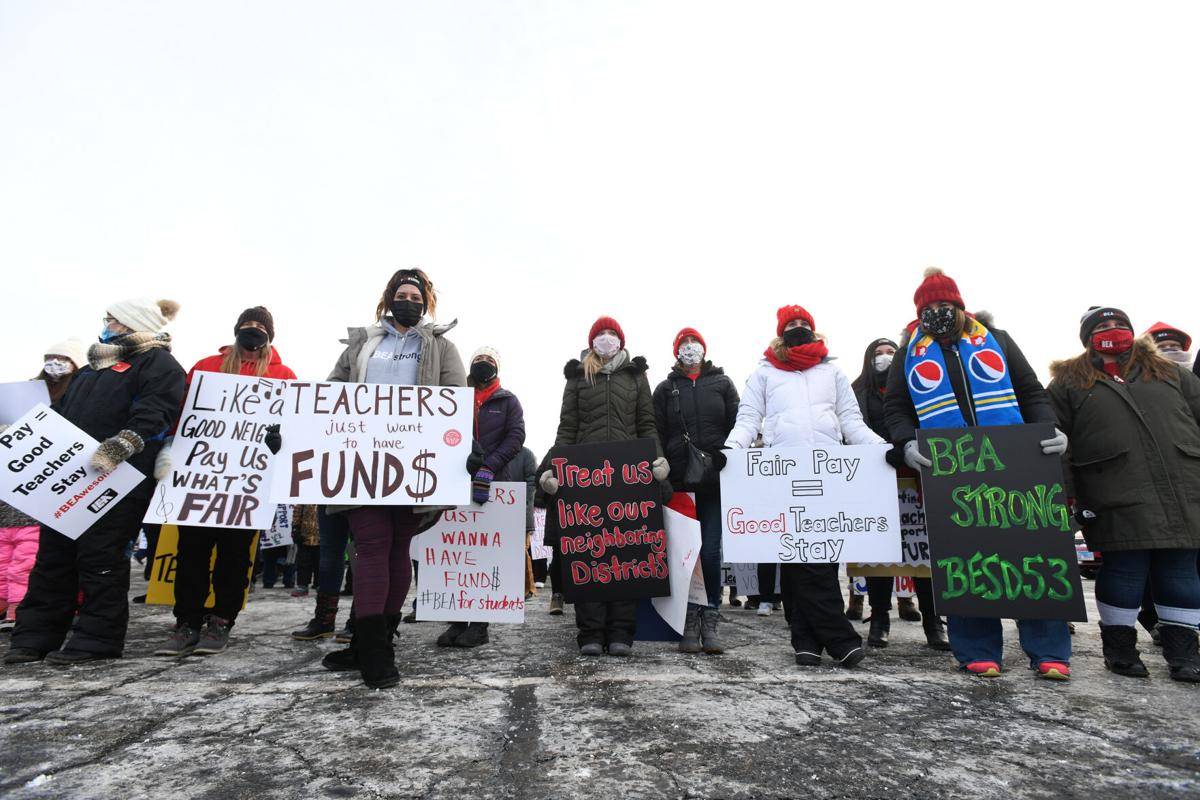 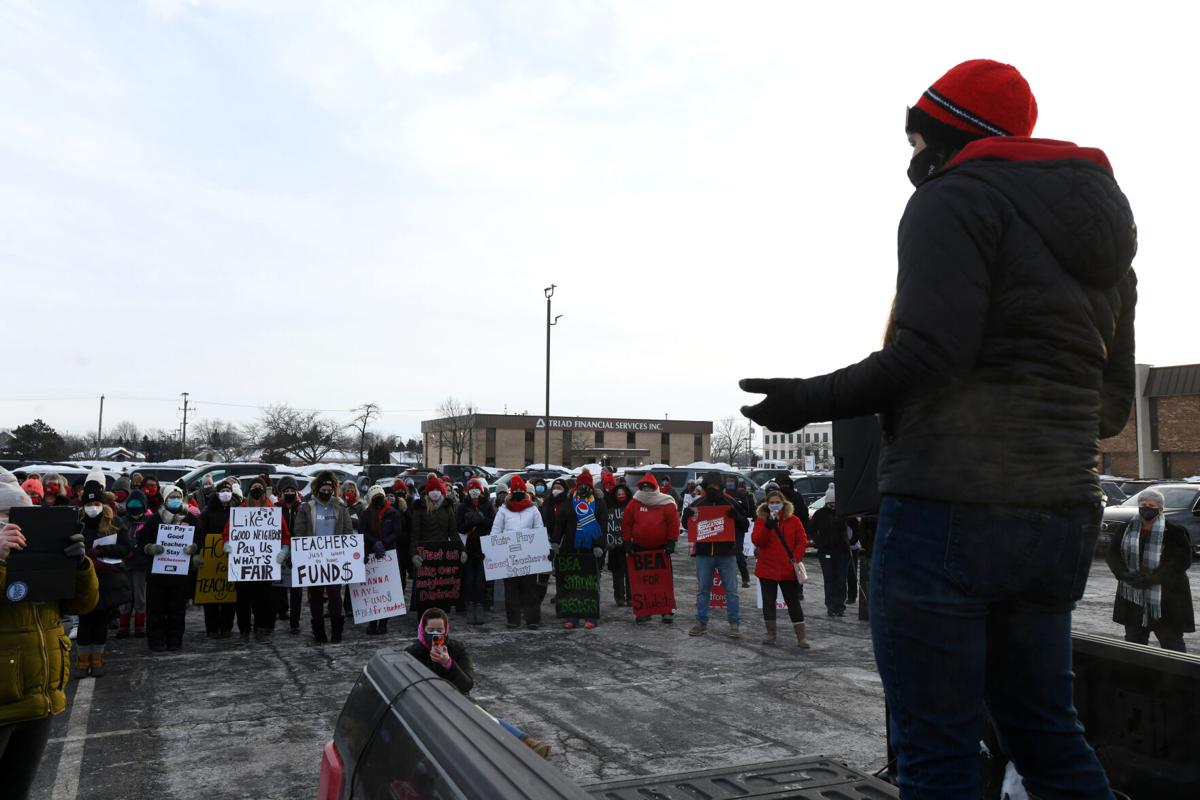 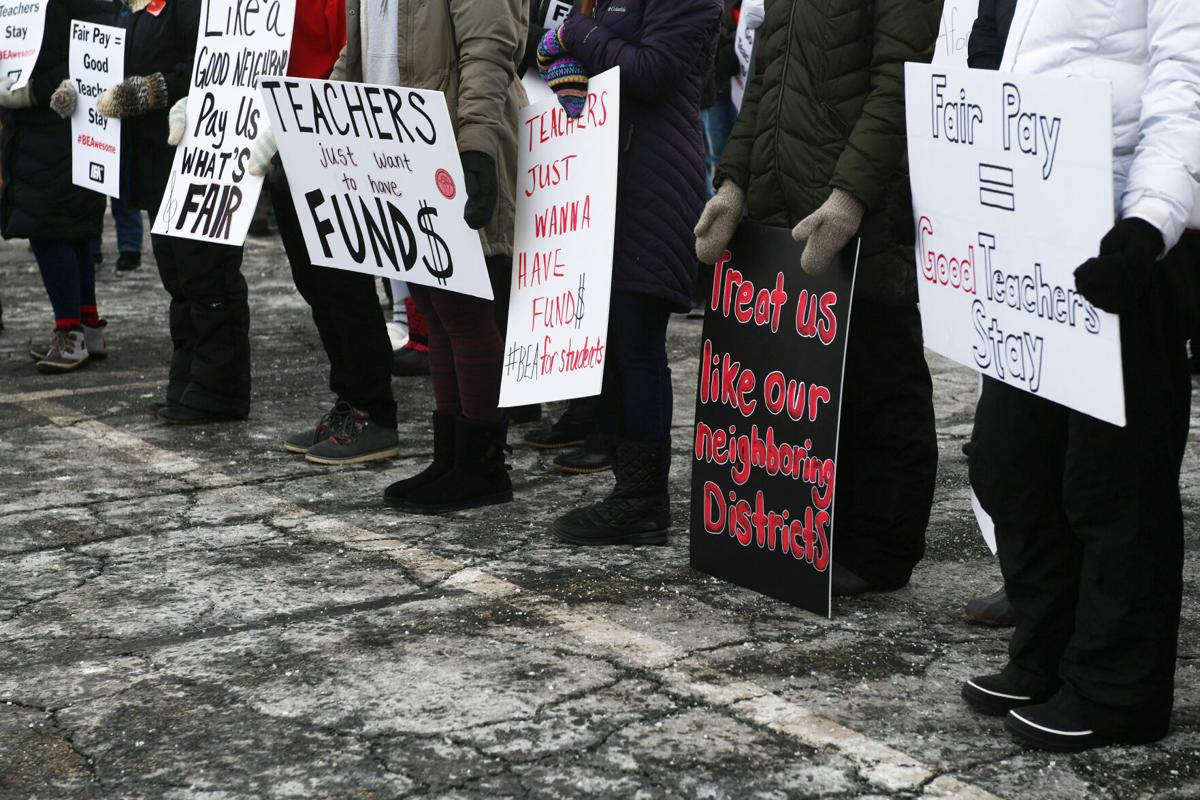 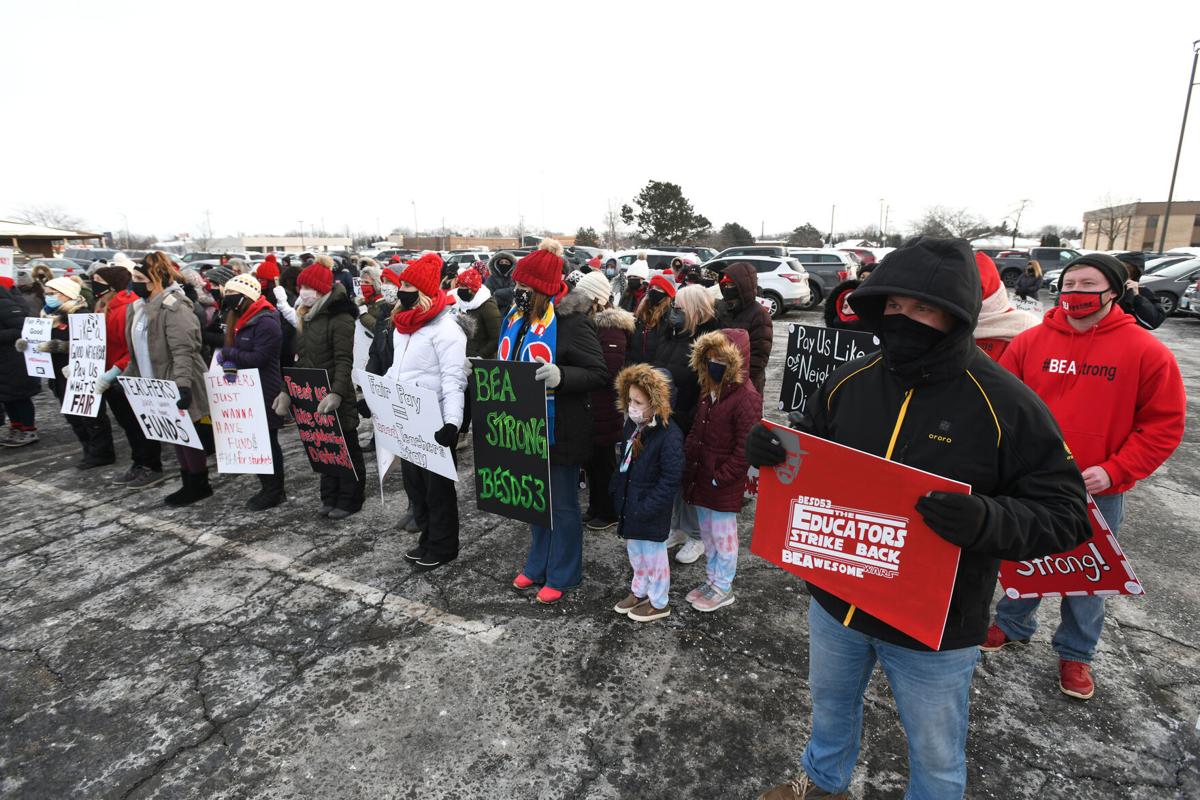 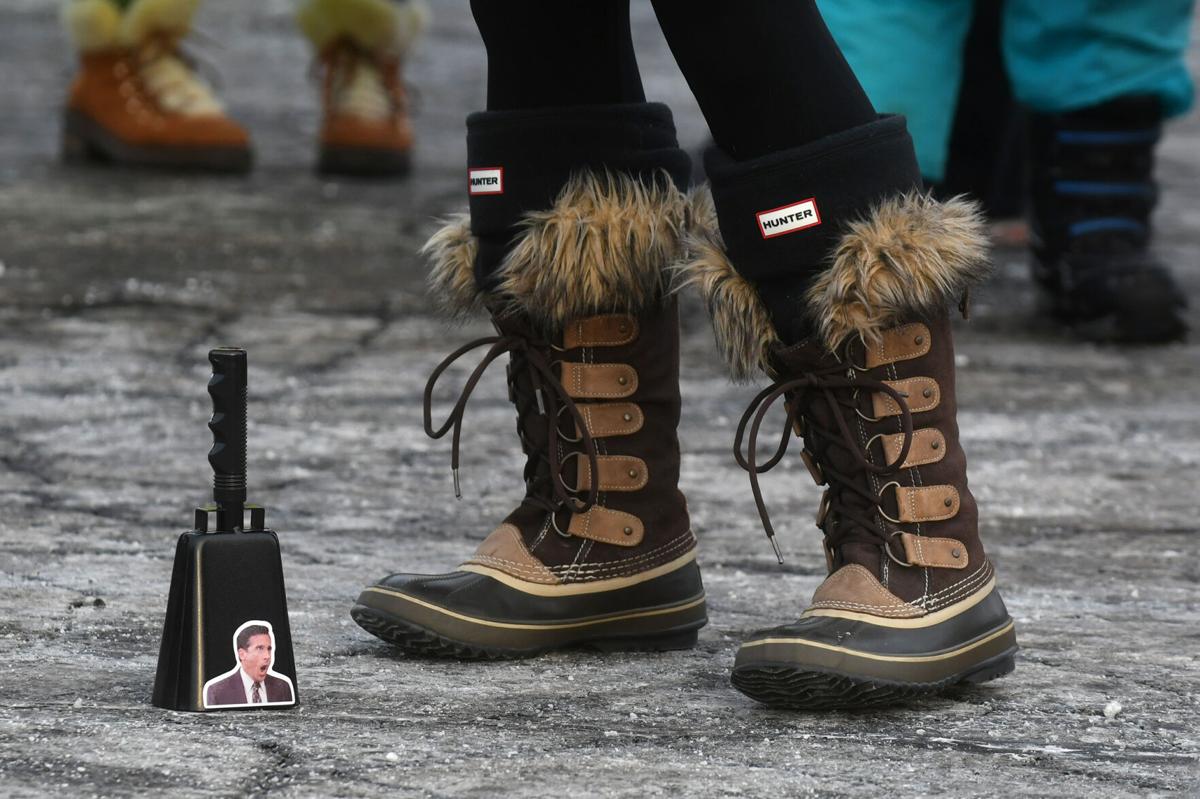 A cowbell rests on the ground as Bourbonnais teachers and supporters gathered for a rally to demand “fair contract, fair pay” Wednesday afternoon.

A cowbell rests on the ground as Bourbonnais teachers and supporters gathered for a rally to demand “fair contract, fair pay” Wednesday afternoon.

Bearing temperatures around 16 degrees, demonstrators met in a parking lot nearby the Bourbonnais Elementary School District 53 administration building holding signs and many wearing red to show unity with the Bourbonnais Education Association.

Teachers can legally go on strike as soon as Friday, though union leaders said they are eyeing March 4 as the date to strike if an agreement is not met.

The next bargaining meeting is scheduled for Feb. 25.

BEA President Lauren Lundmark addressed those gathered at the rally Wednesday and emphasized that teachers “do not want to strike.”

Negotiations for the contract set to begin at the start of the 2020-21 school year have been ongoing since March 2020. A mediator has been present at the meetings since late November.

Lindsey Boros, parent of a fourth-grader at Liberty Intermediate and a sixth-grader at Levasseur Elementary, addressed the rally and expressed gratitude for teachers’ dedication during the pandemic.

“This year has been unbelievably hard for us all, but unimaginably hard for the teachers of this district to navigate without a contract,” she said. “Yet, here they all are fighting to continue to serve our community with their undeniable expertise.”

Boros is an English teacher at Momence High School, and her husband is an Olivet Nazarene University professor.

“The BESD53 district has lived up to and beyond our expectations as parents and as educators,” she said. “Our girls are thriving here. They benefit from their teachers’ knowledge, love and compassion.”

Boros said that when her family moved from Michigan to Illinois, she was upset that her taxes would be considerably higher — until her kids got into school.

“These teachers in BESD53 are worth more than comparable wages and benefits,” she said. “From my perspective, they are worth every ounce of gratitude that we can afford them.”

With Bourbonnais teachers on the brink of striking 11 months into contract negotiations, Superintendent Adam Ehrman has confirmed that any missed school days due to a strike would be made up during summer.

Bourbonnais teacher Ann O’Gorman asked for the district and board to “value new, high-quality teachers as well as veteran professionals.” She said the contract should recognize the work teachers put in to earn higher degrees.

“This is not a hobby — this is our livelihood, our purpose, and we take it seriously,” O’Gorman said.

The BEA is asking for a “traditional” step-and-lane salary structure in which raises are based on education and experience, as well as raises that union leaders say would put Bourbonnais teachers on par with what neighboring districts make.

While the parties have found common ground on some points, such as common plan time and retirement benefits, they are still in disagreement about specifics.

Additionally, the board presented its offer as a package deal, so the union would have to accept the entire offer in order to accept individual benefits.

In an offer posted to the Illinois Educational Labor Relations Board website for public viewing, the Bourbonnais School Board proposed raises of $1,300 the first year, $1,100 the second year and $1,100 the third year, plus bonuses, over a three-year contract. For a teacher earning a $50,000 per year salary, the raises amount to increases of 2.6 percent, 2.1 percent and 2.1 percent.

The BEA’s offer posted to the IELRB website proposed raises of 5.3 percent the first year, 2.7 percent the second year and 4 percent the third year.

Bourbonnais parent Ashley Ryan spoke during the rally as well and expressed gratitude for teachers, especially for the work they put in navigating the pandemic.

“I grew up going to Bourbonnais elementary schools, as well as I chose this district to raise my children,” she said. “I am proud of this district.”

“I understand there is a budget,” Ryan continued. “I respect a budget, but I know there is money in this budget to pay these teachers competitively.”

Bourbonnais elementary teachers took to the streets Tuesday afternoon to inform people in the community about their struggle to reach a contract agreement with the school district.

Stephanie Markham joined the Daily Journal in February 2020 as the education reporter. She focuses on school boards as well as happenings and trends in local schools. She studied journalism at Eastern Illinois University.