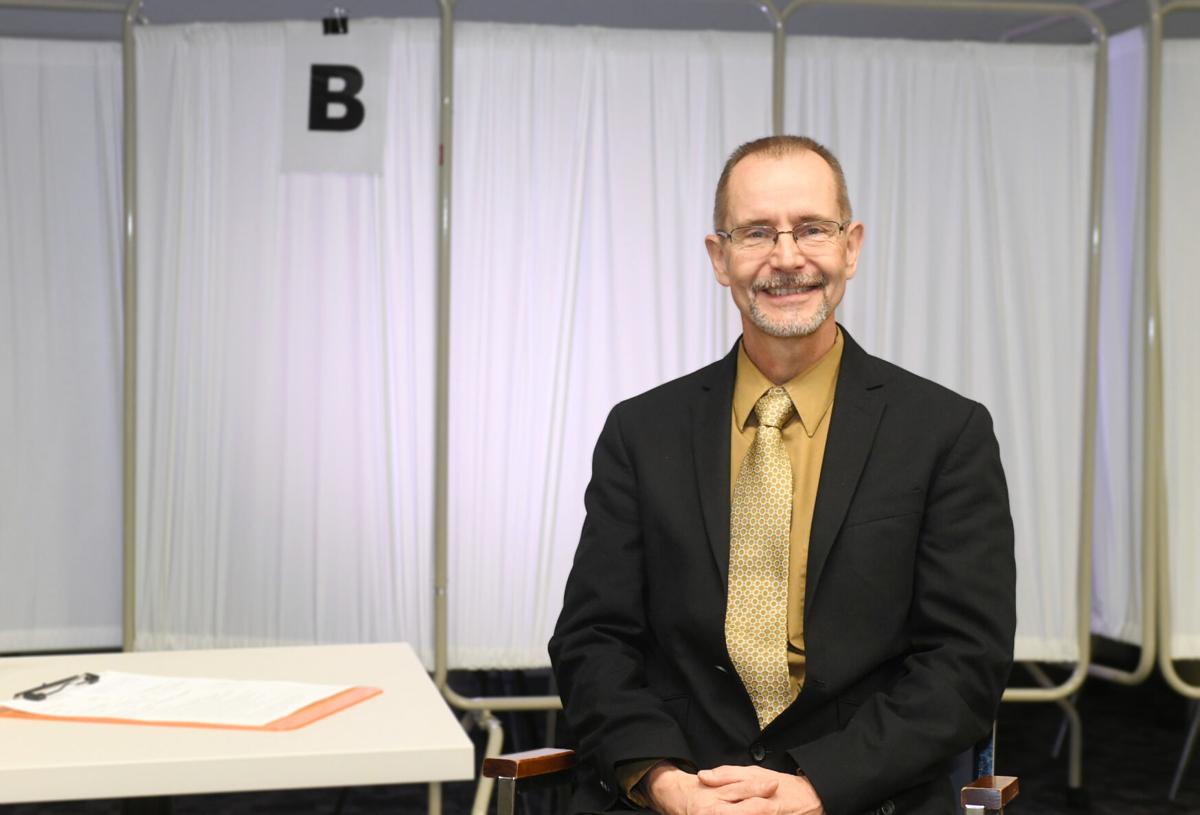 Kankakee County Health Department administrator John Bevis poses for a portrait in the conference-turned-vaccination room at the county headquarters. Bevis has been named the Daily Journal’s Citizen of the Year. READ MORE. 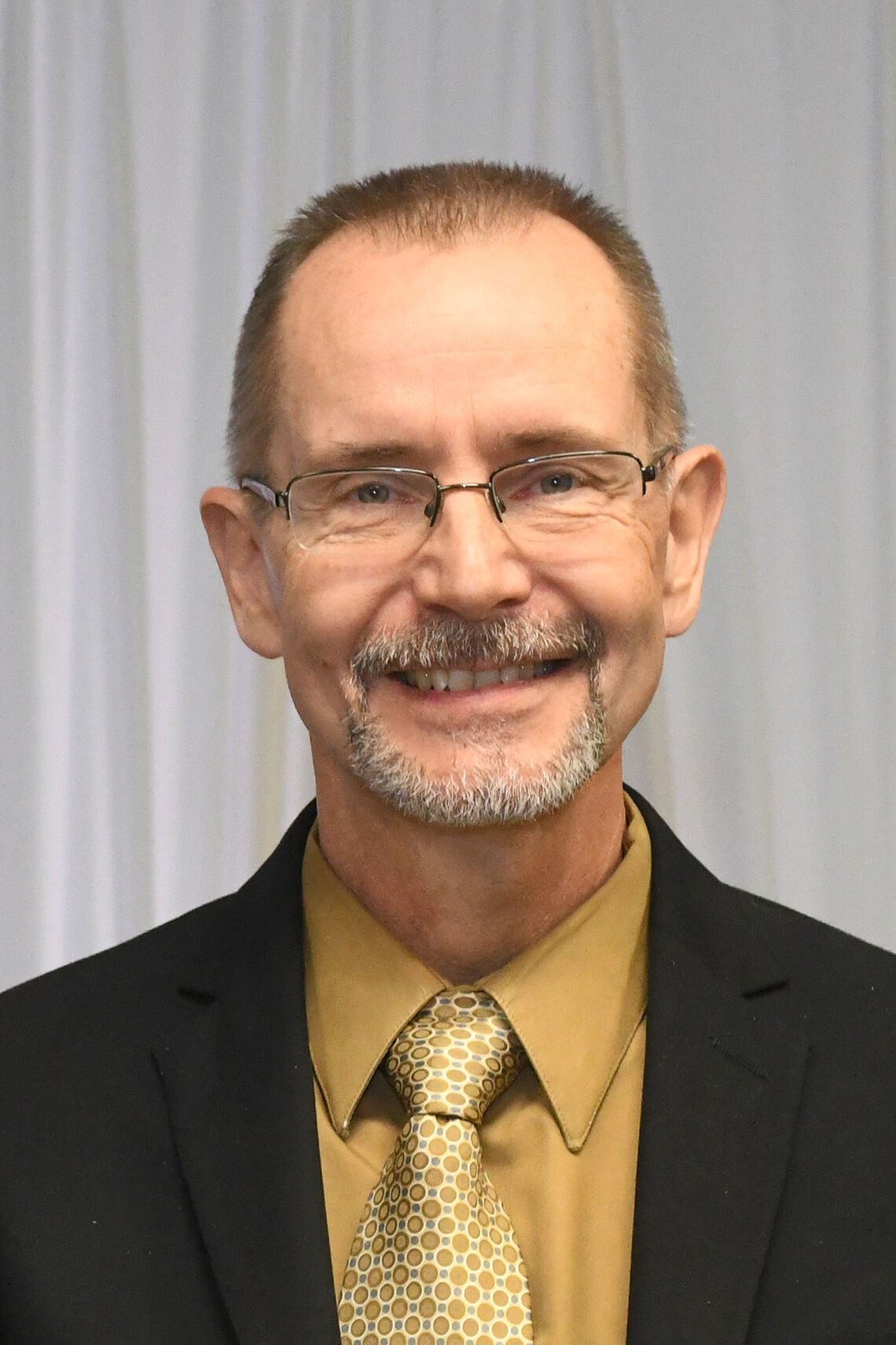 John Bevis spent nearly the entire year of 2020 in a place he would have rather not inhabited — in the eye of the public.

At the front of Kankakee County’s effort to manage and control all the issues surrounding the COVID-19 pandemic, Bevis simply went about the mission he was trained to perform.

It was a position which caused him unease.

Pre-COVID-19, Bevis, 57, of Bourbonnais, preferred conducting business somewhat out of the spotlight, out of the glare of piercing eyes.

However, the public health demands of 2020 thrust Bevis front and center in Kankakee County and through it all, the Kankakee County Health Department administrator learned much about not only dealing with an all-consuming public health crisis, but his ability to be a reassuring, reliable community leader in a time of chaos.

Through his calm, steady leadership during the course of a troubling 2020, Bevis has been named the Daily Journal’s Citizen of the Year.

Asked for a single word to describe 2020, Bevis sat back in his office chair and reflected for only a moment.

“Challenging,” he shot out.

“I believe I have a positive personality. This was something I have not ran screaming from. As a staff, we took this thing head-on. We asked ourselves, ‘What do we need to do? How do we do it?’”

In his typical unassuming manner, Bevis credited the health department staff for making sure the community was taken care of in the best manner possible.

“It’s all them. I’m just the guy who makes sure they have the right tools in the tool box. I just get out of the way and let them do their job,” he said. “We have a great team here.”

Bevis manages a $2.5 million budget and a full-time staff of 35. The group oversees 600-650 food establishments and septic and well construction throughout the county. In other words, the department is busy. Throw on top of that a pandemic and things can really get crazy.

But the calm, steady presence from Bevis has not gone unnoticed by those who spent many hours in meetings with him as they mapped a COVID-19 course for Kankakee County.

Chris Shride, AMITA Health St. Mary’s Hospital president, said these past many months he has come to learn a great deal about Bevis and his appreciation for the work he has done only grows.

“He’s servant-minded in his leadership style. His first thought is: How can I help the community and how can I bring people together to do that?’” Shride explained. “It’s a rare leader who puts others first and themselves somewhere behind. He’s the right leader for the right time for Kankakee County.”

Said Shride: “He inspires a confidence to walk alongside of him. He’s a quiet leader. COVID-19 demanded a fierce determination to lead. That was required. It’s clear to me that he has a fierceness about him and he will do the right things to get this community through this.”

Bevis would most certainly have a level of discomfort hearing such praise. Anyone who knows Bevis knows that he’s not someone who seeks such high compliments.

Bevis wasn’t even sure what career path he would take as he enrolled at Indiana State University. It wasn’t until he attended a career day and he listened to a public health professional that he began to focus his attention in that direction.

Following his 1987 college graduation, Bevis applied for the sanitarian position at the county health department. In that position, he conducted routine environmental health inspections including food services, private sewage, nuisances and water supplies.

In 1991, he was elevated to supervising sanitarian. In 1995, he became director of environmental health. In 2016, he became the administrator for the entire department.

No amount of training could have ever offered Bevis a glimpse as to what he was about to encounter once March 2020 arrived.

And he knew it would only a matter of time before COVID-19 would make its way into the borders of Illinois and then Kankakee County.

Standing before an audience of community and healthcare leaders in the Kankakee County command center in mid-March, Bevis delivered the message that the region had its first positive COVID-19 case.

“I was nervous, but I had a message to share.”

He looks back at that moment.

“In retrospect, in a way it forced me to grow up professionally,” he said. “I had to grow up and get the message out to the public. I just reacted and did it. I had to do it. I had the mentoring and the training. I just had to do it.

He reasoned that if the health department is doing its job, the public won’t notice them.

“But when it goes bad, everyone’s eyes are on us.”

Things had gone bad. Things were about to get much worse.

He made connections with officials at AMITA Health St. Mary’s as wells as Riverside Healthcare.

The three organizations have been in contact on a nearly daily basis since early March.

“This pandemic put the health department and John Bevis front and center,” explained Matt McBurnie, Riverside’s vice president of institutional advancement. “John has not only been a leader inside Kankakee County, but outside of our community as well. He is always bringing information back to us.”

McBurnie said Bevis was certainly most comfortable being the resource person, being the servant, but his preference to outside of the camera’s eye could no longer work.

“We were all thrown on our heels. What he has done operating during this pandemic, in this difficult structure, has been amazing. It’s been great to watch his growth,” McBurnie said.

McBurnie said the greatest skills Bevis may possess are his willingness to acknowledge he does not have all the answers and help from others is needed.

“He didn’t try to be that lone wolf. He pulled people in. He relied on the strengths of others who were around him.”

Bevis chuckles now. He said he recently told his wife, Cheryl, in high school really wasn’t that popular of a guy.

He does acknowledge these past 10 or 11 months have been grueling, exhausting. He worked weeks filled with 12-hour days. He is always available.

“The Lord has blessed me with endurance. I’ve tried to be the first one in the office and the last one out.”

He notes he’s also been blessed for the fact he has not contracted the virus.

Asked what he has learned about John Bevis this past year, Bevis sits back and looks skyward.

“That’s a good question. I would say to not doubt myself so much. I’ve also learned that I’m adaptable.”

His wife, Cheryl, has watched him grow professionally these past months. She also watched him never refuse to take a phone call no matter what time the phone rang or what day of the week it was.

“Everyone knows now what the health department is and he is the face of it now. ... He’s learned a lot about himself through all of this.”

She noted an elderly woman called him only recently to thank him for organizing the vaccination program. He accepted her thanks. He was touched that she would have taken the time to reach out to him.

Said Cheryl: “He does the best he can do every day to serve the community. That is for sure.”

Over 65? Looking to get vaccinated? Here's how

As someone at 65 or older, you've heard you're now eligible to receive the COVID-19 vaccine. But, who do you call?

The Kankakee County Health Department is asking residents for patience as it works through its vaccinating rollout program.

There's a stack of papers in the Kankakee County Health Department's office that's over 10 inches tall. It's the paperwork for positive test results in the county. And that's just for this month.

In the midst of a global pandemic, no other group is more scrutinized than those who lead healthcare.