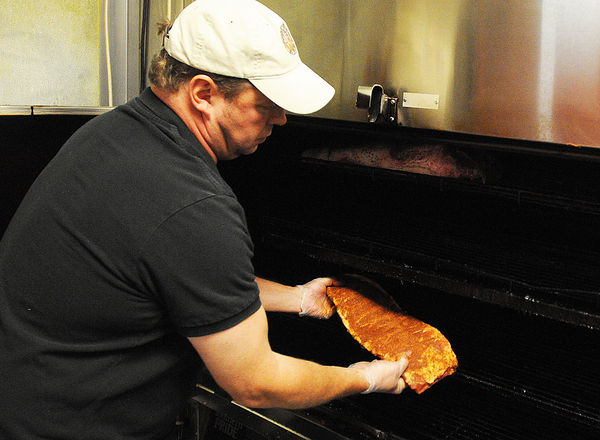 Jim Johanek, of Jimmy Jo's BBQ, puts ribs in the smoker Tuesday afternoon. The same preparation and cooking will take place for the food served at the Kankakee Valley Park District's BBQ Fest this weekend. 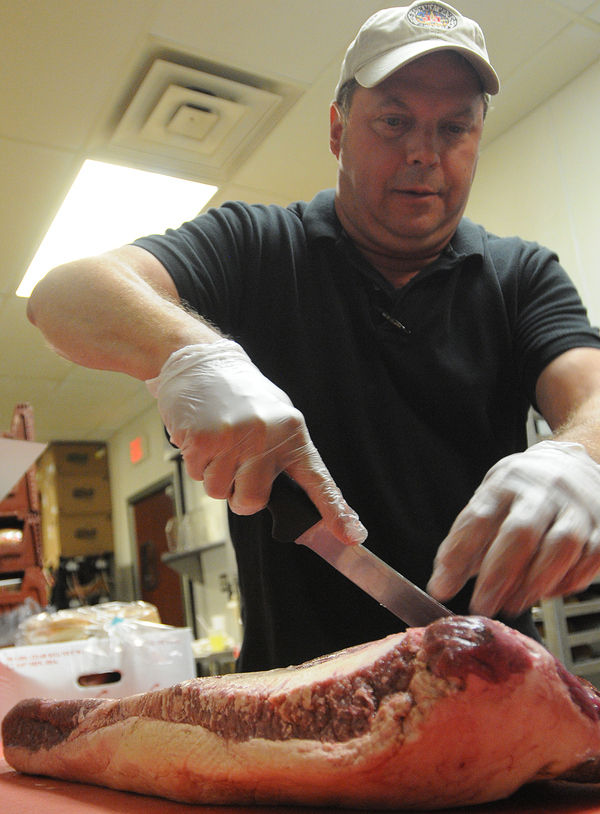 Jim Johanek, of Jimmy Jo's BBQ, puts ribs in the smoker Tuesday afternoon. The same preparation and cooking will take place for the food served at the Kankakee Valley Park District's BBQ Fest this weekend.

Barbecue masters will smoke and sauce it up on Friday as they battle for a tall trophy and a year's worth of bragging rights in the barbecue pit known as the Ice Valley Centre Ice Arena parking lot.

The Fourth Annual BBQ Fest kicks off Thursday at River Road Park in Kankakee. Centered around barbecue — but including a lineup of rock, hip hop and country music — the festival will embrace 12 competitors who want to prove they have the best chicken, beef, pork, and, of course, sauce.

Jimmy Jo's will defend its Grand Champion title. The two-time winner out of Bourbonnais has taken a simple philosophy of, "If it ain't broke, don't fix it." Restaurant owner Jimmy Johanek only has to look at his 2012 and 2014 trophies for that advice. Thus, he is bringing back last year's team.

"For us, it's all about consistency in the restaurant," Johanek said. "We compete with the same product we serve in our restaurant and don't make many changes to our recipes. I like our chances because of our consistency."

However, Johanek is making one change. He will present a new dish in the miscellaneous category.

He said he also wants to improve upon the restaurant's second place finish in last year's beef competition.

"We have good brisket," he said. "We won chicken last year, but I would really like for us to take beef this year."

Meanwhile, other competitors have made some changes throughout the past year.

"I have my head in the game," the Kankakee restaurant owner said. "As long as everything else falls into place, we should be good. We have a slightly sweeter, stickier sauce with a kick that I look forward to using."

Then, there's Brother George's BBQ, which has made a complete equipment overhaul by adding a new BBQ trailer with a Lang BBQ smoker attached to the back.

The Bourbonnais-based purveyor of sauce wants to do better than his second-place finish in last year's beef competition. Perhaps a new shredded chicken sandwich will make that happen.

"We know each other and are friends, but the pride factor kicks in once the competition starts," said "Brother" George Smith. "We all want to be the best in Kankakee County. That competition brings out the best in all of us."

Doreen and Guy Anderson are returning for their third go-round with a storm of new BBQ creations. Their business, Squeels on Wheels, located in Grant Park, has become a summer and weekend hobby for the couple that works full-time.

Last year, they took first in the miscellaneous category by brandishing their Squeel Dog, an all-beef hot dog containing pulled pork, coleslaw and jalapeno slices. The Andersons' 17-year-old granddaughter, Olivia Anderson-Wegner, who has helped the family business for six years, came up with last year's concoction.

In an effort to repeat last year's success and do even better, the Andersons are following the same recipe. They're leaning on Olivia's taste mastery. That's all Doreen had to say about the top secret entry.

"We've been brainstorming all year, thinking about ways to improve," Doreen said. "We want to surprise people with our miscellaneous dish. It's going to be different, and it was Olivia's idea. I can say that."

To add to the competition, the Kankakee Valley Park District brought in three newcomers. Off the Bone BBQ is coming in from Pickerington, Ohio; Cherry Red Roasters BBQ is smoking out of Dwight; and Spring Creek BBQ is streaming in from Buckley.

While a trophy and bragging rights are alluring, competitors hope the festival will bring more attention to the art and culture of barbecuing.

"It's a great opportunity to show off some of the local talent and spread some knowledge about barbecue," Wilder said. "It will show that barbecuing isn't just some meat in a crock pot with some sauce. There's an art to it."

The competition begins at 2 p.m. Friday, but the pits and smokers will be blazing well before then.