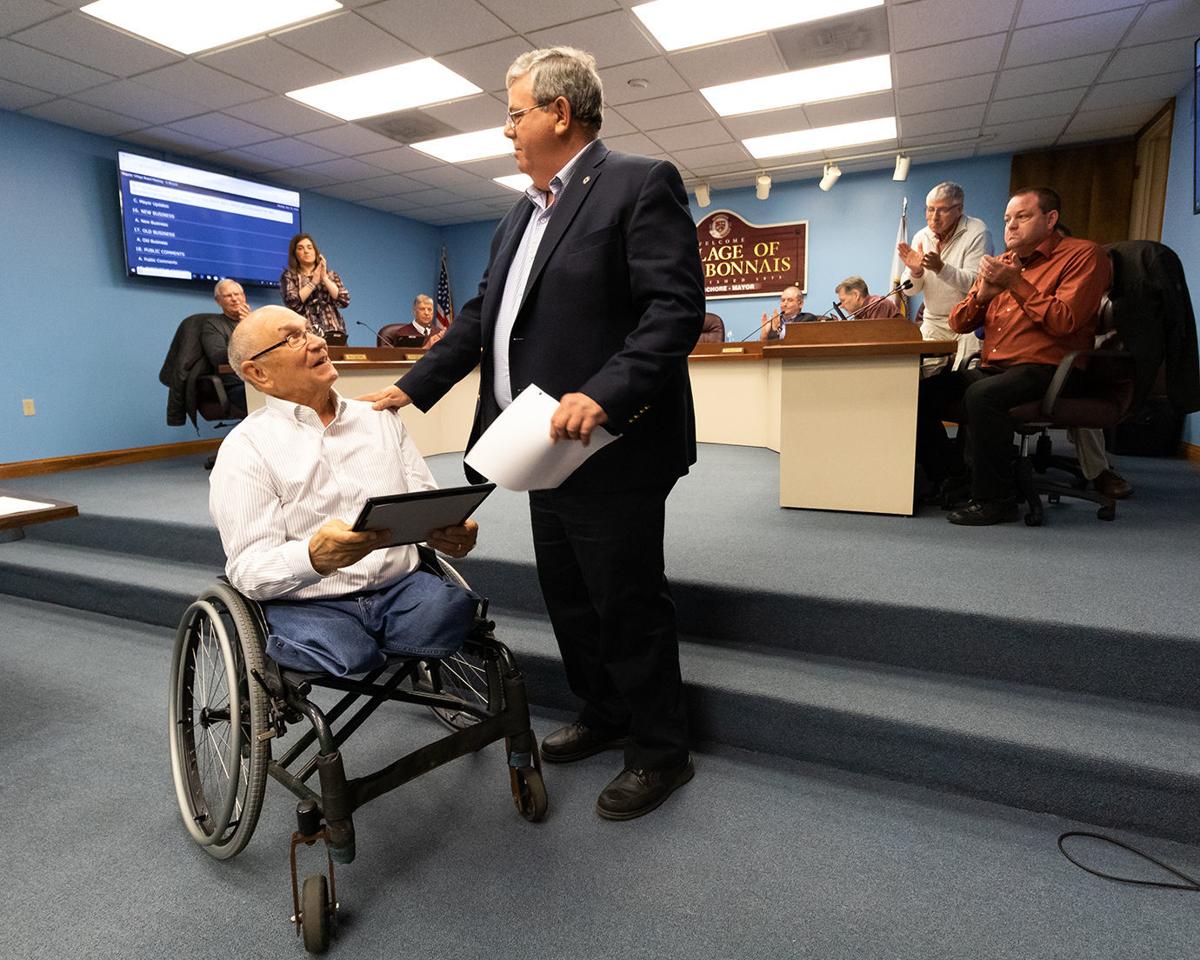 Barry Baron is congratulated by Bourbonnais Mayor Paul Schore after being named as a recipient of the Bicentennial HONOR 200 Award by the Illinois Bicentennial Commission last fall. The awards went to 200 state veterans who were recognized for their achievements and contributions made to their home communities. 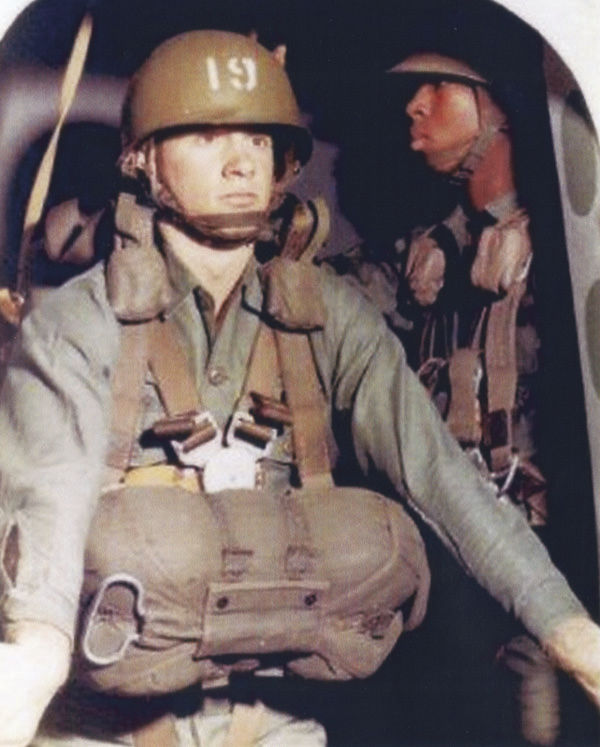 This photo dates back to the days when Bourbonnais resident Barry Baron served as a U.S. Army paratrooper in Vietnam. Baron was injured and lost both of his legs during his tour of duty. but nonetheless returned home to lead a remarkable life marked by community involvement.

Some of us might have difficulty identifying the defining moment of our lives.

For Barry Baron, no such difficulty exists. Much of the past 50 years have been shaped by the events of Feb. 26, 1969. Baron was in the Mekong Delta region of Vietnam at the time, serving as a U.S. Army Airborne infantry sergeant. He stepped on a mine, which detonated under him, and cost him both legs.

If you don’t know Baron’s story, you might assume the succeeding years were filled with pain, agony and regret. Your assumptions would be wrong.

Despite contending with significant physical limitations since he was 20 years old, Baron, now 70, has spent much of the past five decades making significant contributions to humankind, particularly as an advocate for fellow veterans but also as an elected official in both Bourbonnais and Kankakee County.

Moreover, he has enjoyed the leisure side of life. Baron is an avid outdoorsman who regularly hunts and fishes. He also plays billiards and recently took up golf.

For his many efforts and for the zest he shows for life, Baron has been named the Daily Journal Lifetime Achievement Award winner for 2018.

The village of Bourbonnais nominated Baron for the award. In the nomination letter, village administrator Mike Van Mill wrote this about Baron:

“Mr. Baron is a highly decorated military hero whose heroism permanently changed the course of his life. Overcoming the challenges of war, Mr. Baron returned to his hometown and dedicated his life to serving his community in various ways.’’

A glass half full perspective enabled Baron to achieve so much, and it was in place even as he was hurt in combat. When asked to recount the event, he expressed a measure of gratitude rather than misfortune.

But Baron did leave Vietnam with his life intact. The next 10 months were spent at Walter Reed National Military Medical Center in Bethesda, Md. During his long recuperation, he was around people in similar situations, which eased the transition.

At the same time, another Kankakee County and Vietnam veteran also was placed in a similar plight. John Fulton, an Army medic, stepped on a landmine on May 13, 1969, and suffered multiple injuries which would cost him his right leg.

A story about Fulton appeared in the Daily Journal a short time later.

“There was an article about me, and his aunt sent it to him at Walter Reed,’’ Fulton said. “He (Baron) read it and sent me a letter, and that’s how it got started. That was in 1969, and we’ve been friends for 50 years.’’

The men formally met when both returned home, Baron to Bourbonnais, and Fulton to Herscher. While they were surrounded by people they could identify with in the hospital, Baron quickly discovered it wasn’t the same way on the outside.

“When we came back from Vietnam, there was no one to talk to (about the experience) except fellow Vietnam veterans,” Baron said. “John was the only other one like me.’’

As he adjusted again to civilian life, Baron gradually re-entered the mainstream. He didn’t have immediate plans to pursue higher education, but chose to do so for a specific reason.

“I needed structure,’’ he said. “I decided to stay home at KCC (Kankakee Community College), and it was a fabulous opportunity for me.’’

Baron earned an associate of arts degree from KCC in 1972, and then, looked toward Florida to continue his education. But one of the prospective Florida schools informed Baron he would be better off staying home as the University of Illinois had one of the best programs for rehabbing students anywhere in the nation.

He enrolled there and eventually earned a degree in accounting. Along the way, Baron rediscovered his enthusiasm for athletics he had developed as a youth and during his years at Bradley-Bourbonnais Community High School, as he was a standout wheelchair basketball and football player at Champaign-Urbana.

Once back home, Baron took a job with one accounting firm and than another with the local Oldsmobile dealership owned by Roy Lang. Lang was one of many people Baron praised for giving him an opportunity.

Another opportunity took him away from accounting, but toward something that would prove to be a natural fit. Baron was hired as the adjutant at the Illinois Veterans Home in Manteno in 1991 and remained on the job until 2009.

“It’s a great place,’’ Baron said. “I met so many veterans, and we became immediate friends. When I had the opportunity to retire, it was bittersweet.’’

Even now, Baron regularly visits the home, where he will deal cards to the veterans or bring them on a fishing excursion to the pond located there.

In the midst of this active life, Baron also found time to enter the political arena. Former Bourbonnais Mayor Ernest Mooney asked Baron to be his treasurer, and he served the village in that role for five years. He then spent 12 years as a village trustee. Baron also is a former Kankakee County Board member.

While politics and other aspects of life have come and gone, there have been constants. One has been his wife of 48 years, Janine. The couple raised three daughters and now have five grandchildren and one great-grandchild.

“You got to have a great wife, and I picked a winner,’’ he said.

Another constant has been his lasting association with fellow veterans. Baron has attended many reunions throughout the years, and is looking forward to next month, when a group of friends and veterans will pay a visit to Baron’s Florida winter home.

“It’s the old band of brothers story,’’ he said. “We’ve seen the top of the mountain.’’

Baron reached the top after enduring what is arguably a rock-bottom-type setback. When asked how he remained positive and found success after that fateful day, Baron put it this way:

“You got to have faith in the big guy (God). You also have to keep moving forward, not back.’’

Age 70; Bourbonnais resident. Married to his wife, Janine, for 48 years. The couple has three adult daughters, Cheri, Lesley and Brooke, five grandchildren and one great grandchild.

Member of Vietnam Veterans of America

Served 12 years as a Bourbonnais Board of Trustees member

Past Kankakee County Board member