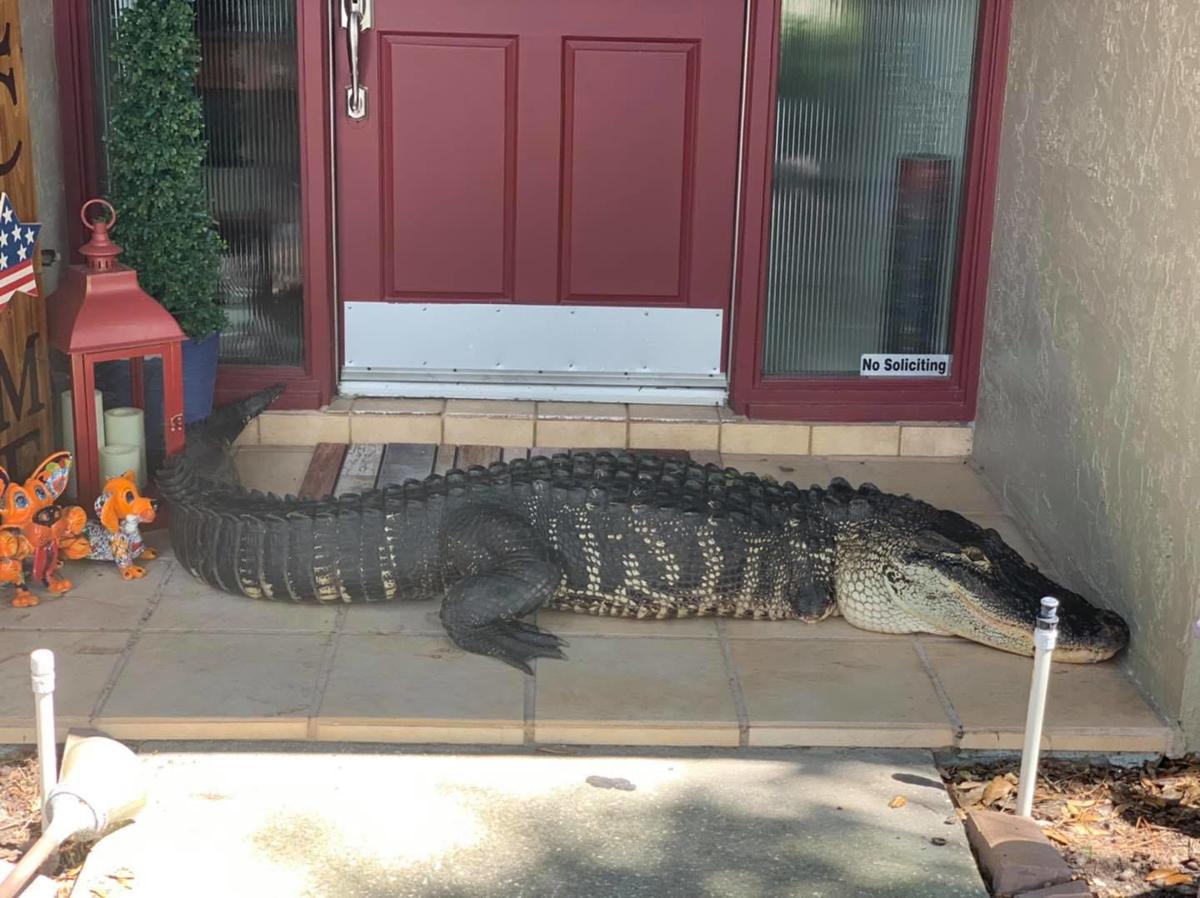 The alligator is seen resting on the front porch of Mark D. and Jennifer Williams’ front porch of their home in Tampa, Fla. It’s clearly ignoring the No Soliciting sign just above its head. 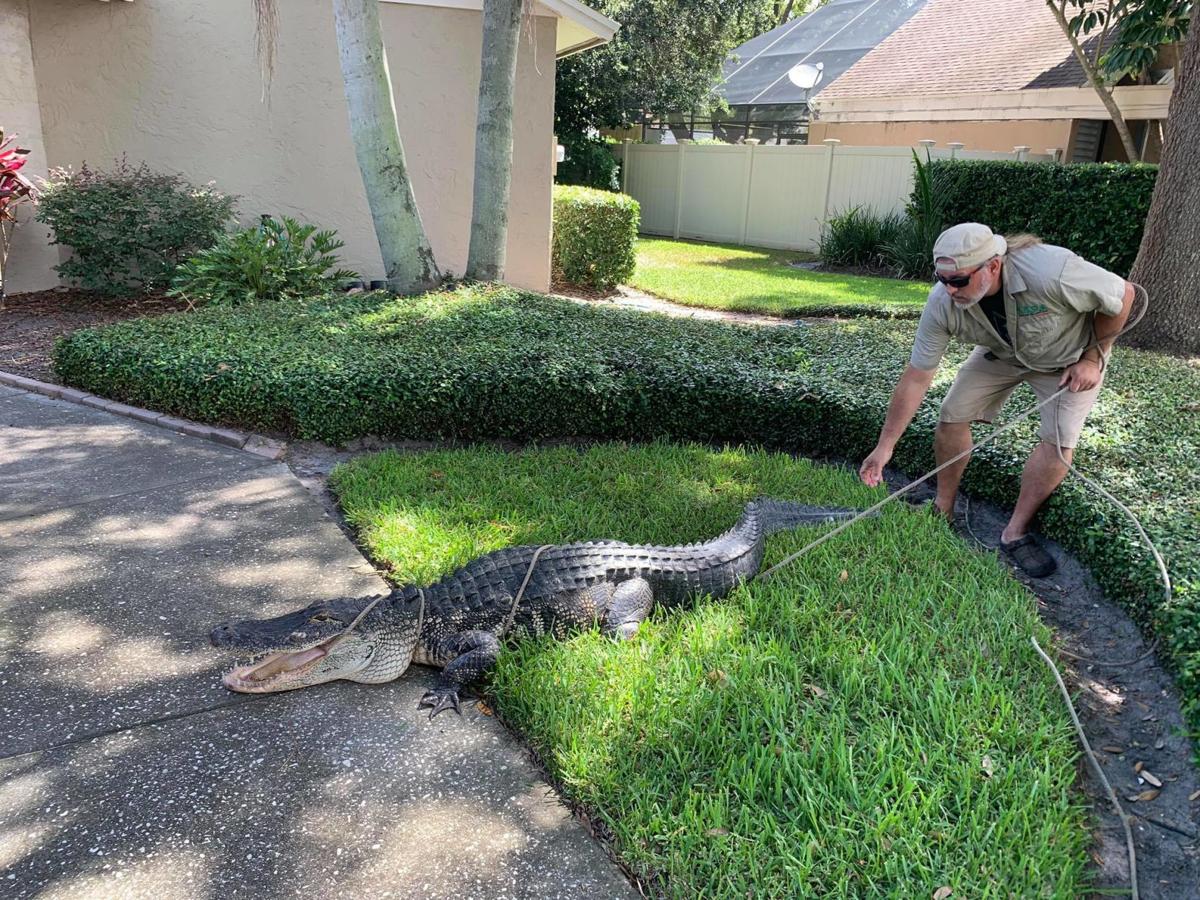 A member of Croc Encounters Reptile Park and Wildlife Center works on placing a rope around the alligator. 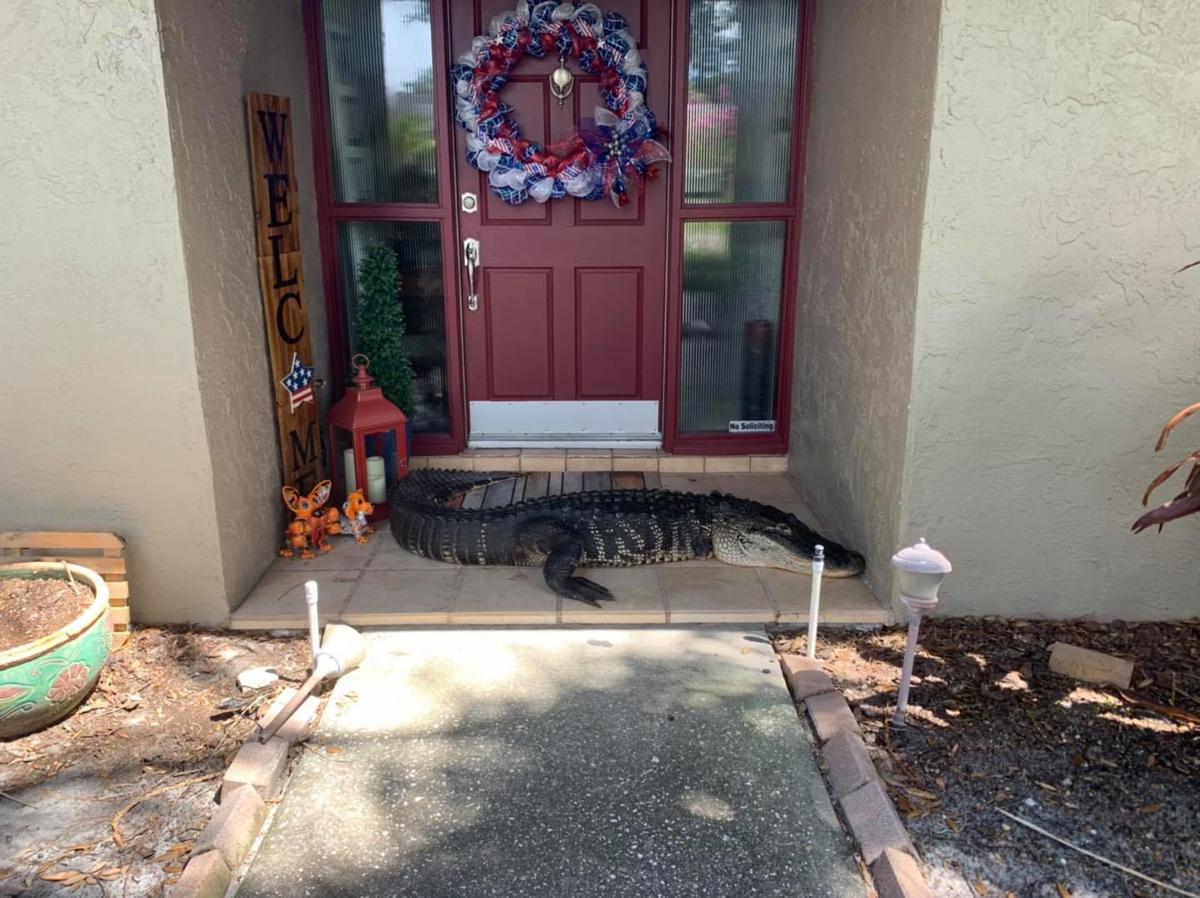 The alligator sits on the porch before personnel from Croc Encounters Reptile Park and Wildlife Park arrive to remove him.

The alligator is seen resting on the front porch of Mark D. and Jennifer Williams’ front porch of their home in Tampa, Fla. It’s clearly ignoring the No Soliciting sign just above its head.

A member of Croc Encounters Reptile Park and Wildlife Center works on placing a rope around the alligator.

The alligator sits on the porch before personnel from Croc Encounters Reptile Park and Wildlife Park arrive to remove him.

TAMPA, FLA. — There are fishing stories and then there are alligator stories.

Kankakee native Mark D. Williams and his wife, Jennifer, now have an alligator story. And it’s not even about a regular alligator, but one missing its right front leg and half of its back left leg.

It’s a story that unfolded Tuesday on the front porch of their Tampa, Fla., home.

The couple have lived in a quiet Tampa neighborhood for five years since moving from Aurora, Ill., Mark Williams told the Daily Journal during a phone call on Thursday.

“Our neighbors have lived here in Florida most of their lives. They said we are more Florida than them now,” Williams said.

Williams grew up in Kankakee and graduated from Kankakee High School in 1990 while Jennifer is originally from Oswego.

The story of the porch-sitting alligator has made the media rounds in Florida after the company that captured the gator, Croc Encounters Reptile Park and Wildlife Center, posted pictures on the capture on Facebook.

Here’s how their alligator story goes:

“My wife was up about 7 a.m. and heard a weird noise,” Mark Williams recalled. “It was a strange, scratching noise. She went to our doorbell camera and yelled, ‘There’s an alligator on our porch.’ I was in a deep sleep and woke up.”

The alligator was making himself at home on the porch, Williams said. It was clearly ignoring the no soliciting sign posted near the front door.

After securing their two dogs, Rufus and Missy, Williams said they looked out a window and confirmed there was indeed an alligator on the porch. An 8-foot, 9-inch alligator to be exact.

While an alligator on your porch is odd, living two blocks from the nearest body of water makes it even more odd.

It’s believed the gator, who was rather aggressive, was kicked out of a nearby lake by the other males. Alligators’ mating season is April to June, and the gator had old wounds that had healed over.

“They said he was probably out at night looking for another body of water, dawn came around, and he decided to hole up on our shady porch,” Williams wrote on the Croc Encounters Facebook post announcing the animal’s capture.

“We wanted to initially leave him alone, but we had some people that saw him and were getting way too close in our front yard, so we were worried about an incident because the humans weren’t behaving.”

And there was the concern for delivery drivers as Jennifer, who works from home, was expecting a package that day. She posted a sign on the garage door in hopes of stopping delivery drivers from approaching the front porch. It read, “Delivery STOP! Leave Packages here! ALLIGATOR at front door!! (Seriously)”

When Croc Encounters came to remove the gator, Mark said the animal was none too happy.

“They were not welcome to remove him,” he said.

“It was definitely interesting watching them capture him. They used ropes. He had nothing to do with the cloth they threw on his head. They let him roll and tangle himself in the rope. He got tired.”

Broken during the ordeal were two ceramic dogs as well as two two watering lines, he said. Ironically, a welcome sign on the porch was knock on its side during the scuffle.

“It’s the most exciting thing I’ve had happen,” he added.

He said after pandemic orders are lifted, he and his wife would like to visit the gator at Croc Encounters.