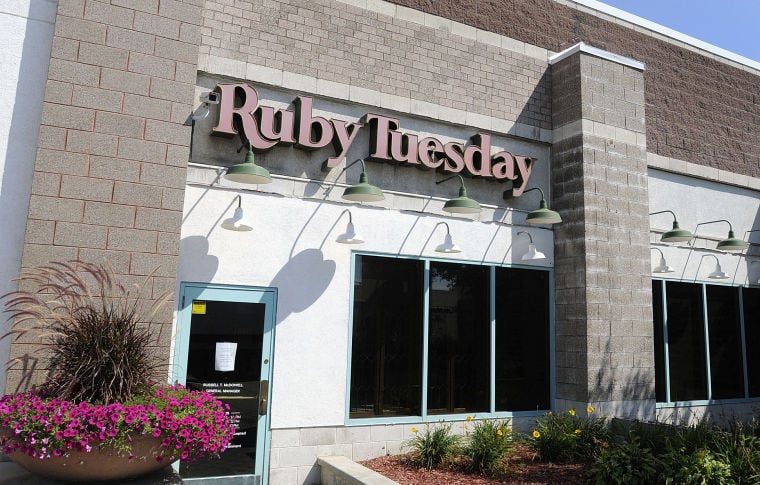 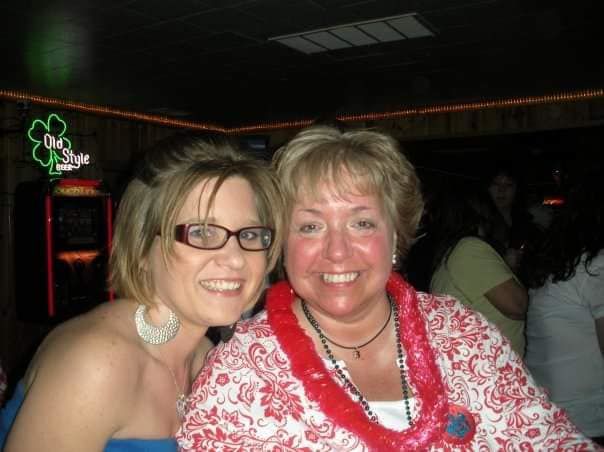 Carly Bloomquist, left, and Barb McGrath pose for a picture in 2009 at Ruby Tuesday Restaurant at the Northfield Square mall. Former employees of the now-closed eatery are having a reunion on Aug. 3. at the Aroma Park American Legion. 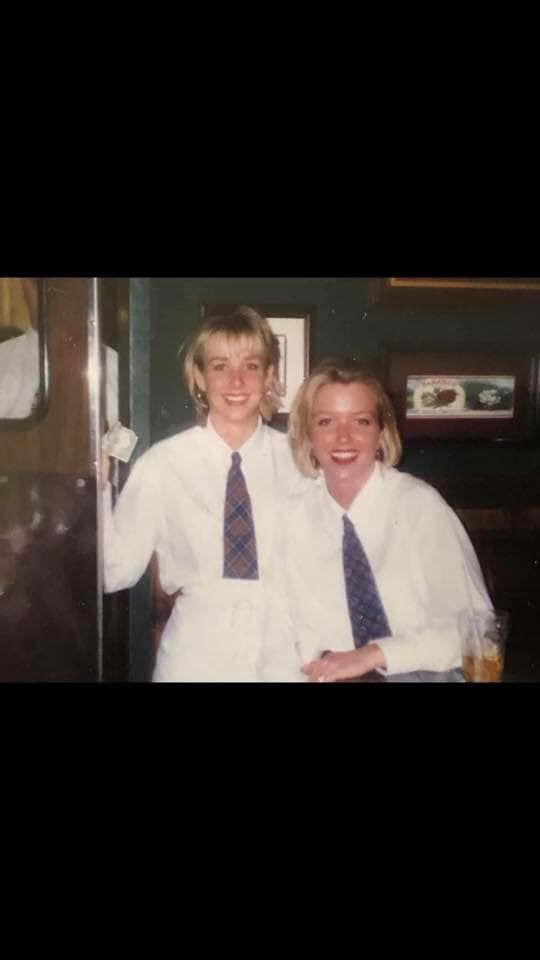 Nicki Brasel Brace, left, and her sister, Amy Brasel Morris, were former servers at Ruby Tuesday. Nicki now lives in Dallas, Texas, and Amy lives in Bourbonnais. Both plan on attending the reunion.

Carly Bloomquist, left, and Barb McGrath pose for a picture in 2009 at Ruby Tuesday Restaurant at the Northfield Square mall. Former employees of the now-closed eatery are having a reunion on Aug. 3. at the Aroma Park American Legion.

Nicki Brasel Brace, left, and her sister, Amy Brasel Morris, were former servers at Ruby Tuesday. Nicki now lives in Dallas, Texas, and Amy lives in Bourbonnais. Both plan on attending the reunion.

Ruby Tuesday restaurant at Northfield Square mall closed nearly seven years ago. Yet, former employees like Barb McGrath, of Kankakee, still hold close to their hearts the time spent at the once-popular eatery.

Ruby Tuesday closed abruptly in August 2012, and Kansai Japanese Steakhouse opened a year later. Kansai has enjoyed much success in its six years at the Bradley location.

After Kansai took over the restaurant, McGrath drove to her old familiar parking spot outside the restaurant, took a photo and posted on social media — “This is where I’m at.” She went inside to the remodeled restaurant, that had changed more than just the decor.

“It’s not the same,” McGrath said. “A lot of memories in that place.”

Overwhelmed with emotion, McGrath wanted to know if other former employees felt the same. Through social media, she was inspired to put together a reunion with the help of her son, Josh Mason, who worked for a time at Ruby’s.

The Ruby Tuesday Family Reunion, to be held at 5 p.m. Aug. 3 at the Aroma Park American Legion, became a social media firestorm — in a good way — on Facebook. McGrath has been working on the reunion since December.

“I was amazed by the amount of people who’ve responded and are going to attend,” McGrath said. “We had to book some rooms at the Quality Inn because people are coming from out of town.”

Larry Bystry, the first general manager of the local Ruby Tuesday, is planning to attend, driving over from Indianapolis, Ind., where he still works in management for an Indianapolis-based group of 11 restaurants.

“It all came together,” said Bystry of the success of Ruby Tuesday at Northfield Square. He hired close to 60 employees, including four managers for the Aug. 1, 1990, opening. “They stayed. ... It was a good mix.”

Ruby Tuesday was one of the first chain, family-casual restaurants to open along Illinois Route 50 and Interstate 57 interchange where many now do business.

“There’s was no (T.G.I.) Friday’s, no Applebee’s, nothing,” McGrath said. “... It was the place to go to. At Christmas time, you couldn’t get in. There would be three people deep at the bar, waiting to get drinks. People would wait in line for an hour to get in. It was the real deal.”

The restaurant flourished, in part because of the location and also because of how Ruby Tuesday hired its employees.

“They were pretty much my family,” said Nicki Brasel Brace, who now lives in Dallas, Texas. Her sisters, Amy Brasel Morris and Rachel Brasel Lamppa, also worked at Ruby’s.

Bystry, 56, started his career in 1986 with Ruby Tuesday fresh out of Ferris State Univeristy (Mich.). He said when he conducted interviews, he didn’t look for the tallest, the smartest or for superficial qualities.

“I look for people who want to take care of people,” he said. “I’ve been doing this a long time, and in an interview, you can kind of tell. ... When you get a group together like that, you have a family. They want to do a good job. They helped each other out.

“It’s kind of the ‘Cheers’ attitude — ‘Everybody knows your name.’ That staff, they did a good job of doing that. Most everyone we hired was from the area, they knew a lot of the people.

“[The customers] would ask, ‘Is Barb here tonight? Is Vicky here? Can we sit in their area?’”

Russell McDowell grew up in Dyer, Ind., and he was hired out of Purdue University as a manager in 1992 and stayed at the Northfield Square eatery for 11 years.

“When I came down here it was right out of college in ’92, you had two choices — pizza or Ruby Tuesday,” McDowell said. “It was a fantastic place to eat, and the mall was a destination.”

McDowell still lives in Bourbonnais and works in management at Baker’s Square. He’ll be one of more than 100 former Ruby employees who will attend the reunion.

“It will be great to see some people you haven’t seen in a while and let them know you appreciate everything they did,” he said. “You develop those relationships that last a long time.”

The big party might ease some of the pain of the restaurant’s closure.

“That just goes to show you how close we were,” Brace said. “We’re all excited to get back and see each other. It was fun times.”

McDowell returned to work as the GM at Ruby Tuesday a year before it shut down.

“I knew it had a lease agreement with Simon (mall owner), and they were trying to work things out,” he said. “I knew it was a possibility [it would close.]”

McDowell thought Simon and Ruby Tuesday just parted ways. But Ruby Tuesday’s owner, Samuel Beall III, said in a 2008 New York Times story that it was taking the restaurant a little more upscale in an effort to distance itself from the competition

Then, the mortgage crisis in 2008 ignited the Great Recession. Some businesses never recovered.

“It was bad timing,” McDowell said.

Ruby Tuesday still operates 500 company-owned and franchised restaurants, according to its website.

“Ruby’s had shrunk up a little bit,” Bystry said. “They were based in the South, maybe that had something to do with it. Some of them are still around, four or five in the Indianapolis area.

“Ruby’s was a mall-based concept back in the day. Now they have more free-standing stores. When the malls started to dwindle, that might have been part of the reason.

McDowell credited Bystry and Al Whalen, another manager, for instilling a culture building.

“It’s about a family environment,” McDowell said. “... We were always looking to be better than before. It was very rewarding to be a part of it.”

Brace, 48, worked as a server during the day not too long after graduating from Central High School.

“Our managers were great,” she said.” We kind of had this core group that worked there for quite a few years. We all hung out together, not necessarily going out, but afterwards in the restaurant.”

Marie Delabre, who now lives in Grant Park, said they worked hard but enjoyed the camaraderie. She worked 12 years at Ruby Tuesday.

“It was such a tight-knit group of people,” said Delabre, who will be at the reunion. “Even outside of work, we hung out together, we went out together. It was great.”