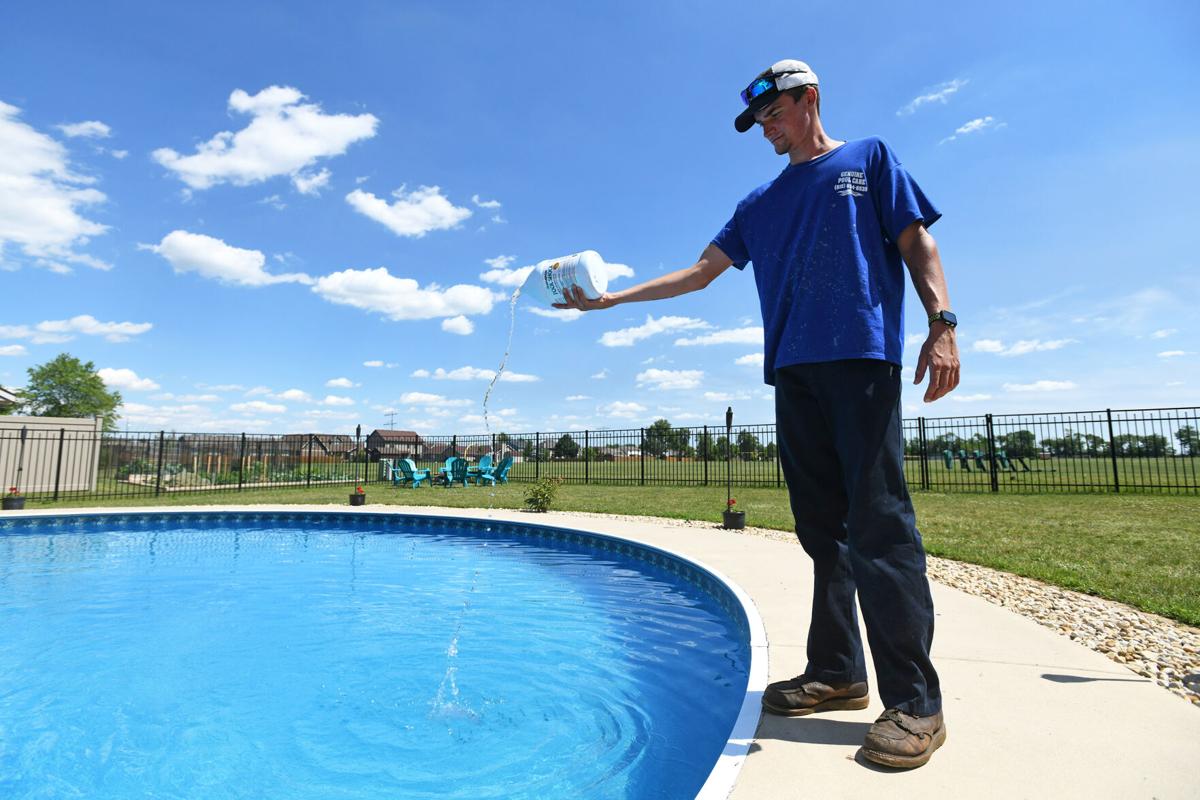 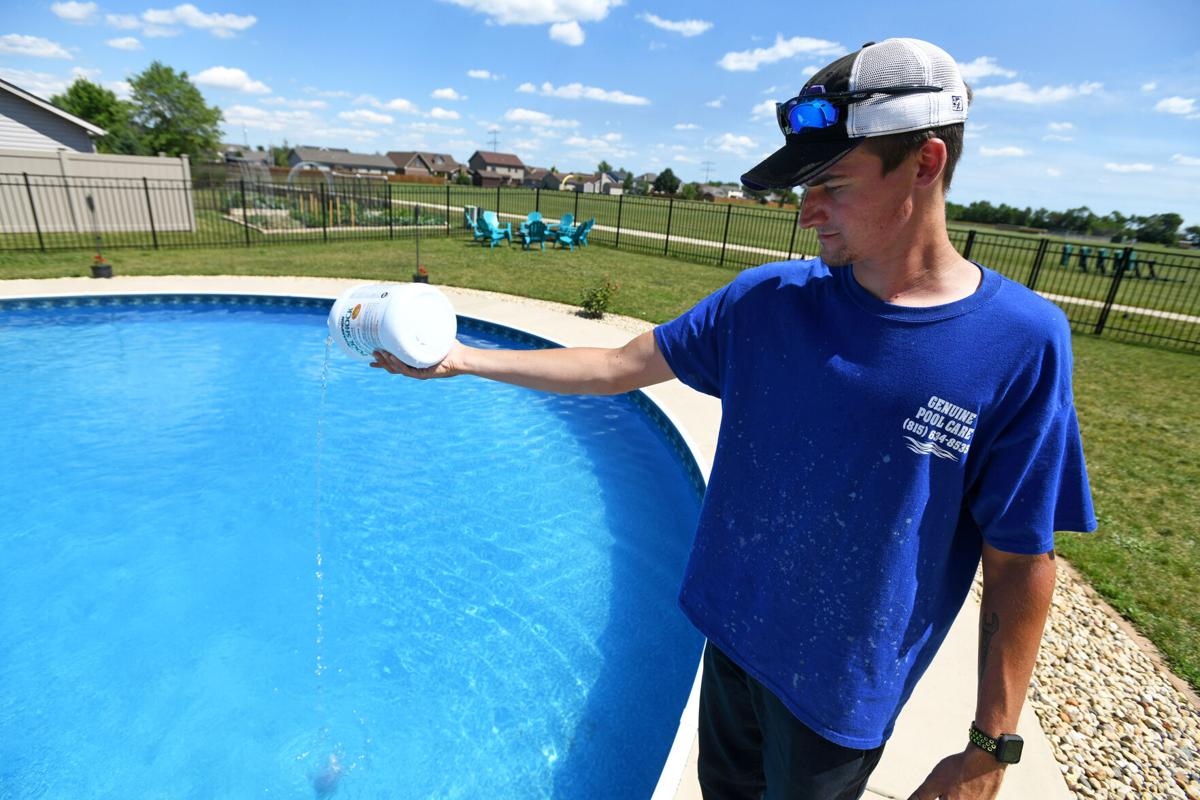 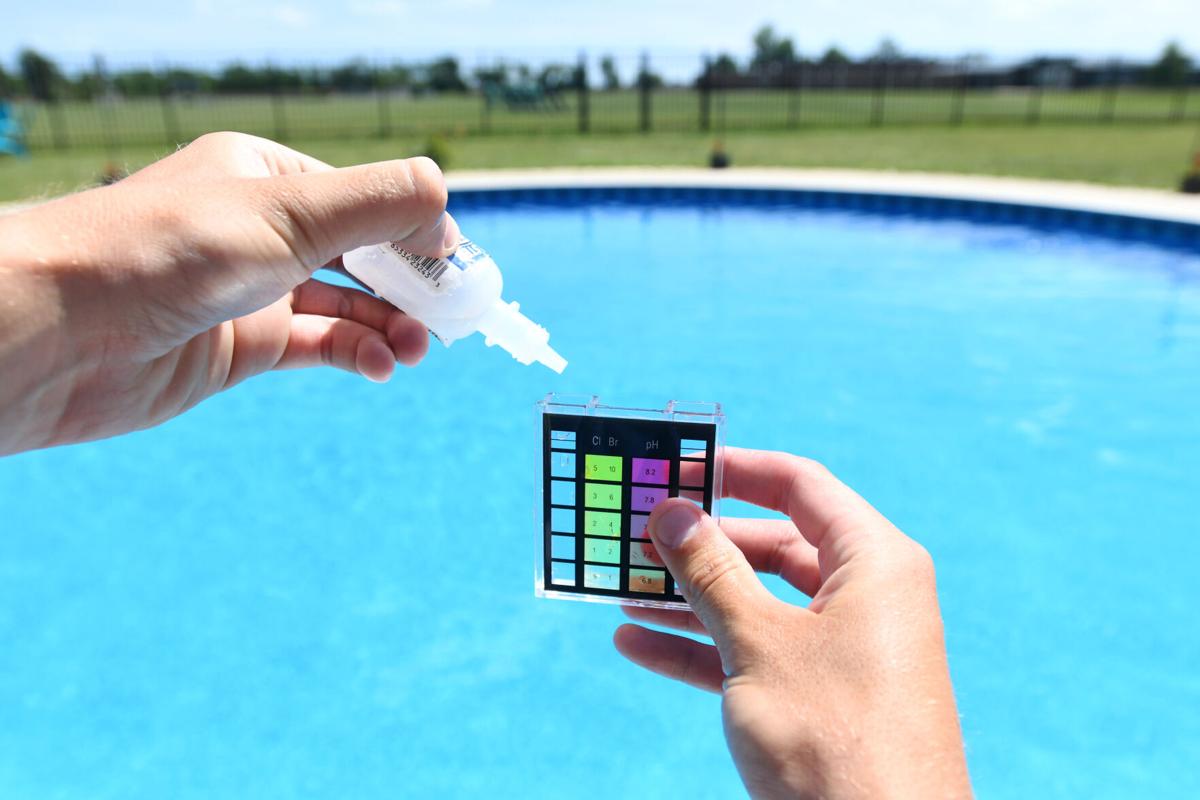 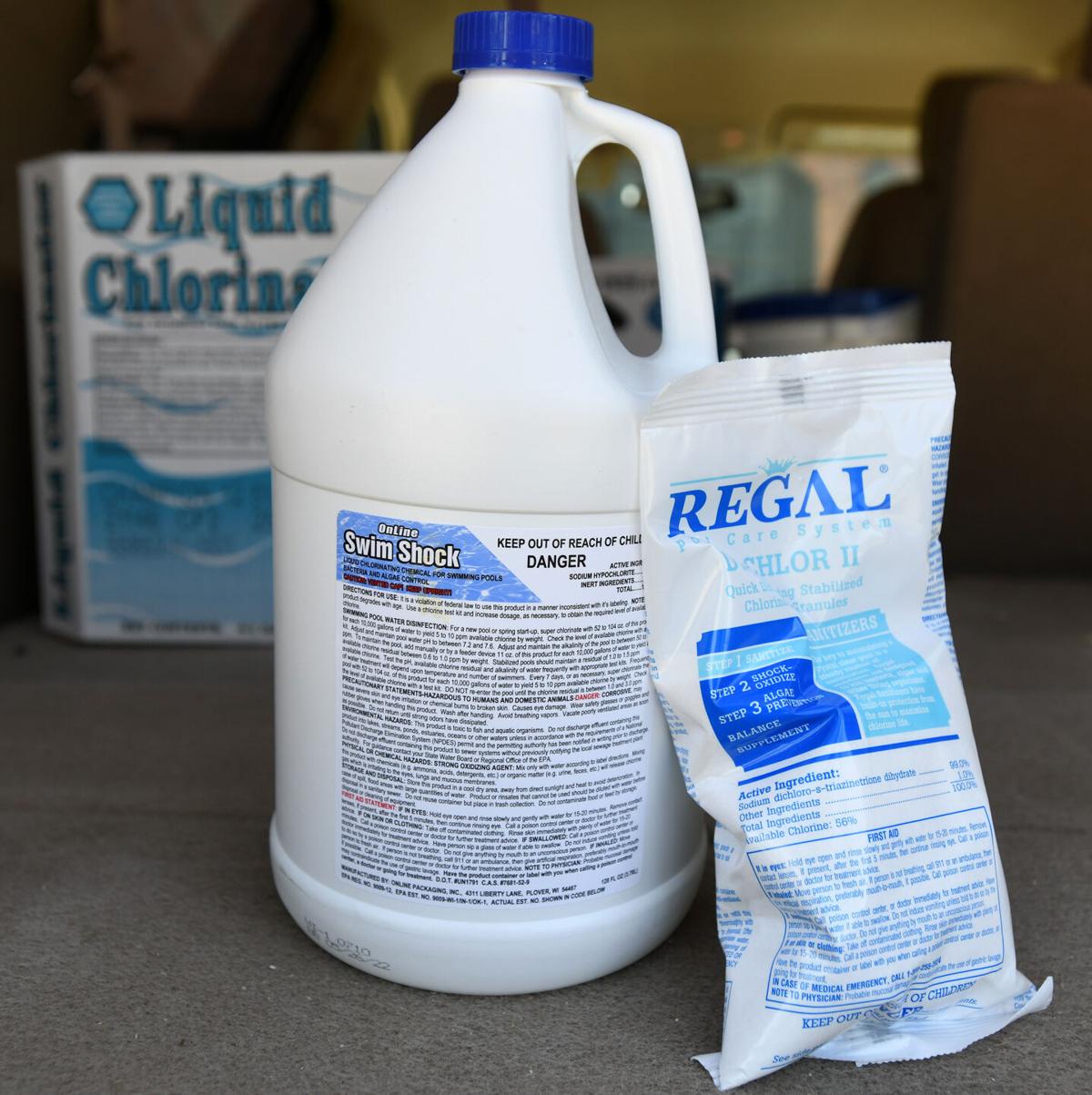 Liquid and granule chlorine have become the most accessible forms of the chemical for pool care in the wake of a nationwide shortage of chlorine, namely chlorine tablets.

Liquid and granule chlorine have become the most accessible forms of the chemical for pool care in the wake of a nationwide shortage of chlorine, namely chlorine tablets.

One recreation people were able to enjoy during the pandemic was to swim in their own backyard pool. That’s still the case as coronavirus restrictions have eased, opening up public pools as well.

But a seasonal shortage of chlorine tablets has altered how they can safely enjoy the recreation. Jim Bloom, owner of Genuine Pool Care in Coal City, said it’s definitely become a major problem.

The tablets are designed to gradually dissolve, releasing chlorine into the water and sanitize as they get smaller. They’re a popular choice for pool owners because of how easy they are to use.

“Chances are you’re not going to find tablets anywhere unless it’s online, and that’s from a private party,” Bloom said.

If private individuals have some tablets, there’s nothing stopping them from reselling them at exorbitant prices, he said.

Complicating the spike in demand, the supply was disrupted by a fire last August at a plant in Lake Charles, La., that had been one of the nation’s leading producers of chlorine tablets. The plant was operated by Canadian chemical conglomerate KIK, according to a report by NJ Advance Media.

A KIK spokesman issued a statement saying the company had a spring 2022 target date for completion of a $170 million reconstruction and expansion of the plant, which is operated by its Biolab subsidiary, the story said. Bloom worries that production could be delayed longer.

“We heard about it last fall, and we were stocking up on 1-pound and 3-pound tablets,” Bloom said. “We had up to 250 buckets. They were gone by mid-May.”

Jeni Tjelle, of Coal City, said the lack of available supplies has disrupted her family’s routine of enjoying the backyard pool, which is serviced by Bloom’s Genuine Pool Care.

“Our summer is our relax time of the year, and we have this [pool] back here, and now we have to be scheduled [for a cleaning] because of not having the tablets,” Tjelle said. “I like keeping my chlorine count very low in the pool, so I don’t like them to shock [liquid chlorine] it during the day because we never know. The kids might have 100 people over. Now we can’t because they’re running out, and they can’t swim for an hour.

“Before when we just had the tablets and the chlorinator, it was much better. It wasn’t such a battle keeping the chlorine content up.”

Deena Rabideau, of Bourbonnais, hasn’t experienced a problem so far, but she’s heard about the shortage of tablets from others.

“I had a full bucket of tablets left over from when I closed it last year,” she said. “I still have plenty of chlorine tablets. I haven’t felt [the shortage] yet.”

She thinks she has enough tablets to make it through the summer.

“I think so,” Rabideau said. “Sometimes I’ll just shock it, too.”

Depending on the size of your pool, it could use 1 to 3 pounds of tablets a week. Bloom said there are the alternatives of using granular and liquid chlorine instead of the tablets. Genuine Pool still has both at its store at 295 S. Broadway St. in Coal City.

“If you don’t have any tablets, you have to go to granular and liquid,” he said “We’ve got a lot of each of those. … We’re in good shape, but we don’t know how long those will last.”

A news release from PR Newswire said that according to the Association for Swimming Ponds and Natural Swimming Pools, inquiries and sales of chemical-free and natural pool products have skyrocketed. But for people who own the traditional pool that needs some sort of chemical to disinfect, the product availability for some form of chlorine might become problematic.

“We have mineral systems ... and we sell Pool Frog, and other types of non-chlorine shock,” she said.

Blanchette said her store had some of the chlorine tablets a few weeks ago, but those sold quickly.

“When they run out of granular and liquid chlorine, then we have a problem,” Bloom said.

Most public pools use liquid chlorine, so it’s not a problem, including Kankakee Valley Park District’s Splash Valley Aquatic Park.

“Fortunately, we are liquid,” said Dayna Heitz, KVPD’s executive director. “I’ve heard about some park districts that are struggling. A truck just came out last week, and we have them on call.”

Heitz doesn’t know how much chlorine Splash Valley will go through, as they adjust to the number of people who visit the pool, but she doesn’t foresee a problem with getting the liquid chlorine.

The survey was available to be taken online for a month, and the survey results were revealed on Monday during the district’s Board of Commissioners meeting at Exploration Station.