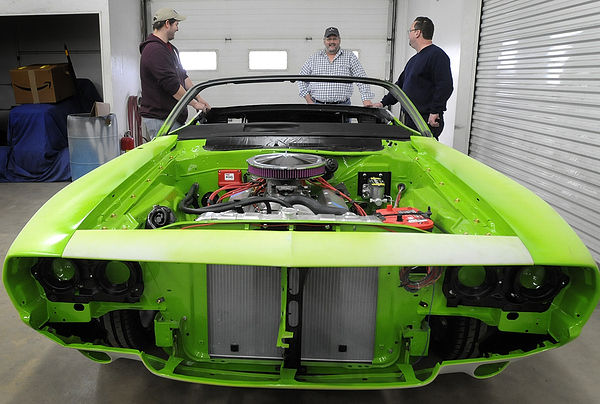 Darren Evans (center), his 19-year old son, Adam (left), and Michael Dumas, of Platinum Auto in rural Manteno look at the 1971 Barracuda being restored for him as a gift from his family. 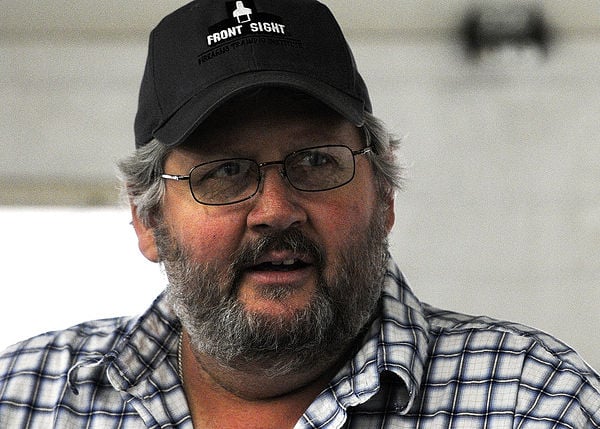 Darren Evans looks at the 1971 Barracuda being restored for him as a gift from his family at Platinum Auto in rural Manteno.

Darren Evans (center), his 19-year old son, Adam (left), and Michael Dumas, of Platinum Auto in rural Manteno look at the 1971 Barracuda being restored for him as a gift from his family.

Darren Evans looks at the 1971 Barracuda being restored for him as a gift from his family at Platinum Auto in rural Manteno.

Manteno auto body specialist Mike Dumas knows what he's doing around yesterday's muscle cars. He lovingly restores them, with incredible attention to every detail. He's done that for 12 years at Platinum Custom Cars.

He also knows something about what cars can mean to people. And that's why he's devoted so much time to a project he's doing off the books.

He knows that the green 1971 Plymouth Barracuda convertible, which he's toiled over for the past nine months, means more than transportation to a man he never met before a friend called to ask a favor last year.

Dumas, 55, couldn't ignore the story. Darren Evans, 51, of downstate El Paso, was the chief sheriff's deputy of Woodford County. And he was just given a death sentence by his doctors. A persistent cough was diagnosed as lung cancer. He was given a year to live.

Of course he wanted to make the most of his time with his family, but there was this one other matter.

"I was a gun collector and I lost all interest in that. I could sell those," he said. "But I had this Barracuda out in a shed. I bought that car when I was 15. And I held on to it, hoping that I could work on it some day with my son [Adam, 18]. My dad [Jim] helped me buy it back then. And I thought it was something I could leave for my son."

But there was never time or money for this sort of indulgence. And, with the clock ticking, the car looked like a dream that couldn't come true. That is, until Darren's friends stepped up. One friend rebuilt the engine. Another specialized in finding the best spare parts. And another made that call to Dumas.

"I told them we weren't going to cut corners: We were going to do it right. But if Darren could hold on, he could drive his car again. He could give his son a memory he'd never forget," Dumas said, noting that the car is now being pieced back together after being completely stripped down for a full restoration.

"The plan is to get it done in time for the World of Wheels [car show ] at the Rosemont in March," he said. "Thousands of people will see it there, and then Darren can drive it off the floor and back to El Paso."

That would be his first time behind the wheel since he parked the car in 1992. At that point it was only on the road briefly. He purchased it at 15, and drove it from 1978 to 82. At that point it needed work, but he wasn't willing to part with it.

In fact, Darren admits he had a little too much fun, and has the speeding tickets to prove it. He matured, though, and found a place on the other side of the law — even though his love for this car never let up.

His commitment made sense, financially. This type of restored car can sell for more than $100,000. But Darren isn't interested in that reward. He wants to see Adam behind the wheel, maybe tearing down some of the same roads he traveled.

First, though, Dumas has more work to do. The painting isn't complete. All of the parts have to come back together — perfectly, to suit his Detroit native.

"I still keep busy with my clients' cars, but I put all of my personal projects on hold until this is done," he said. "I have a couple of trucks in pieces in storage while I put in all my nights and weekends getting this done."