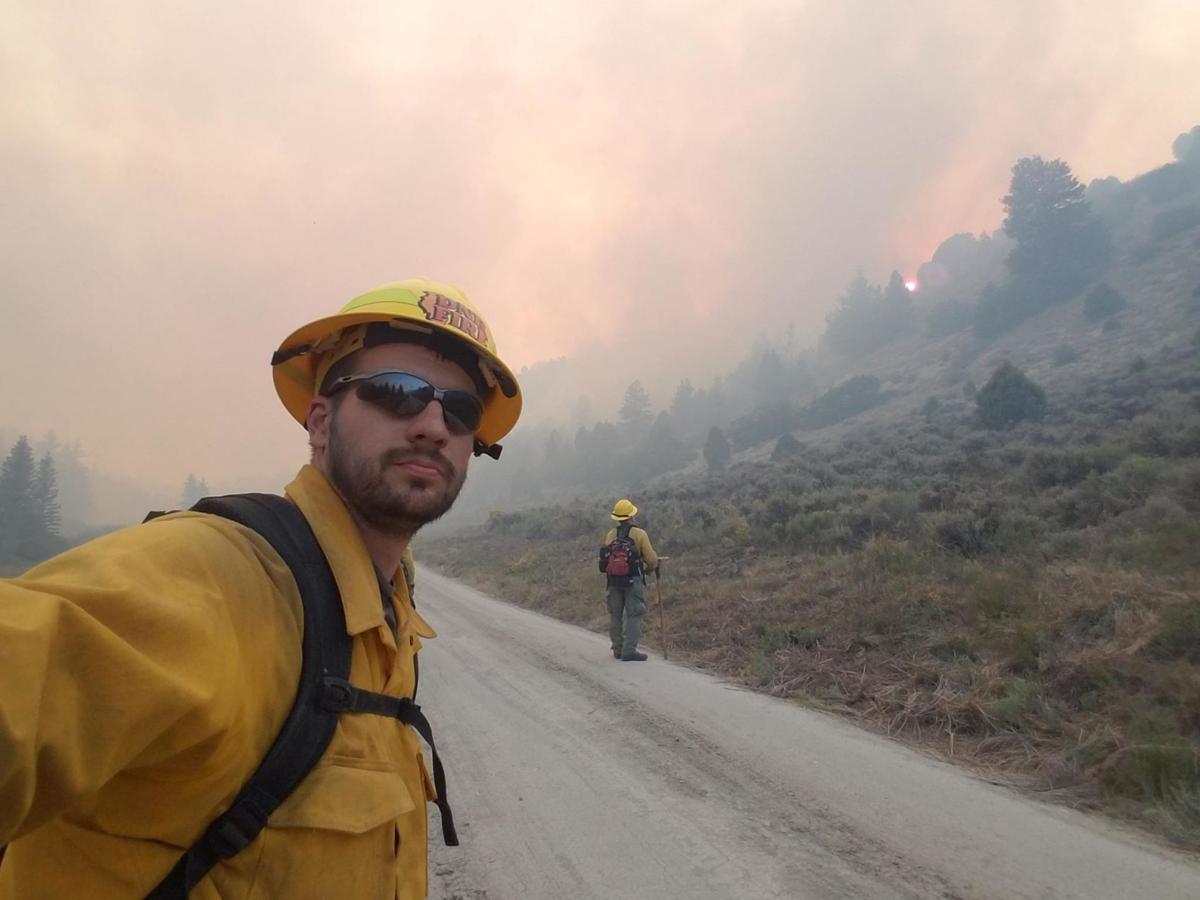 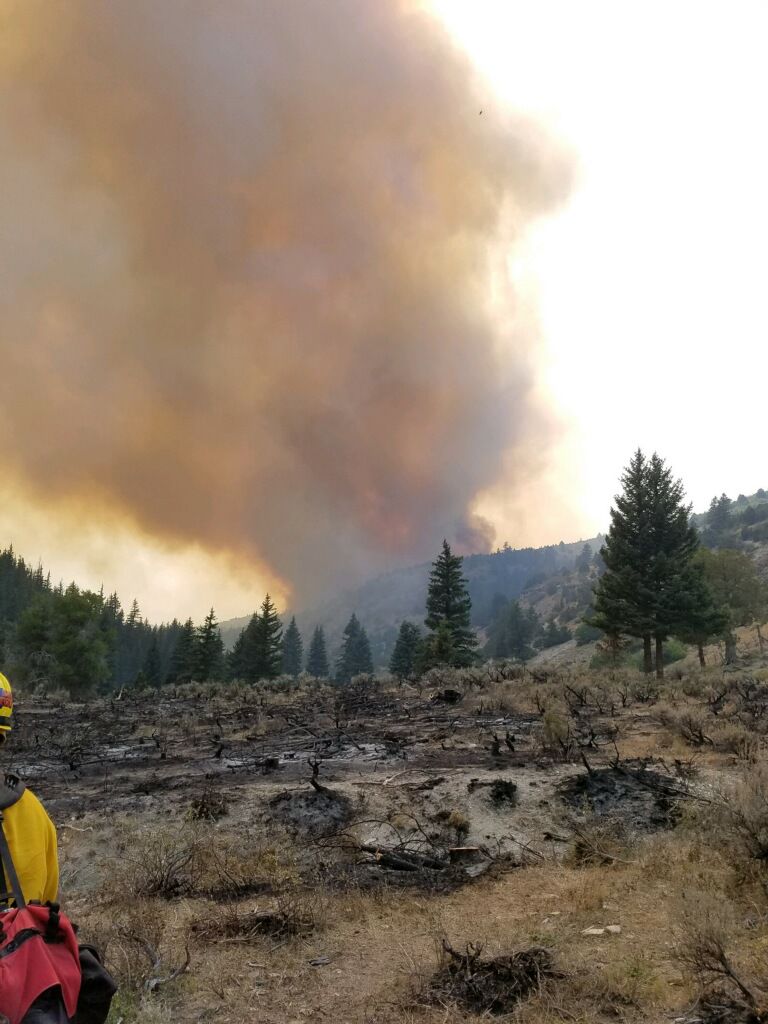 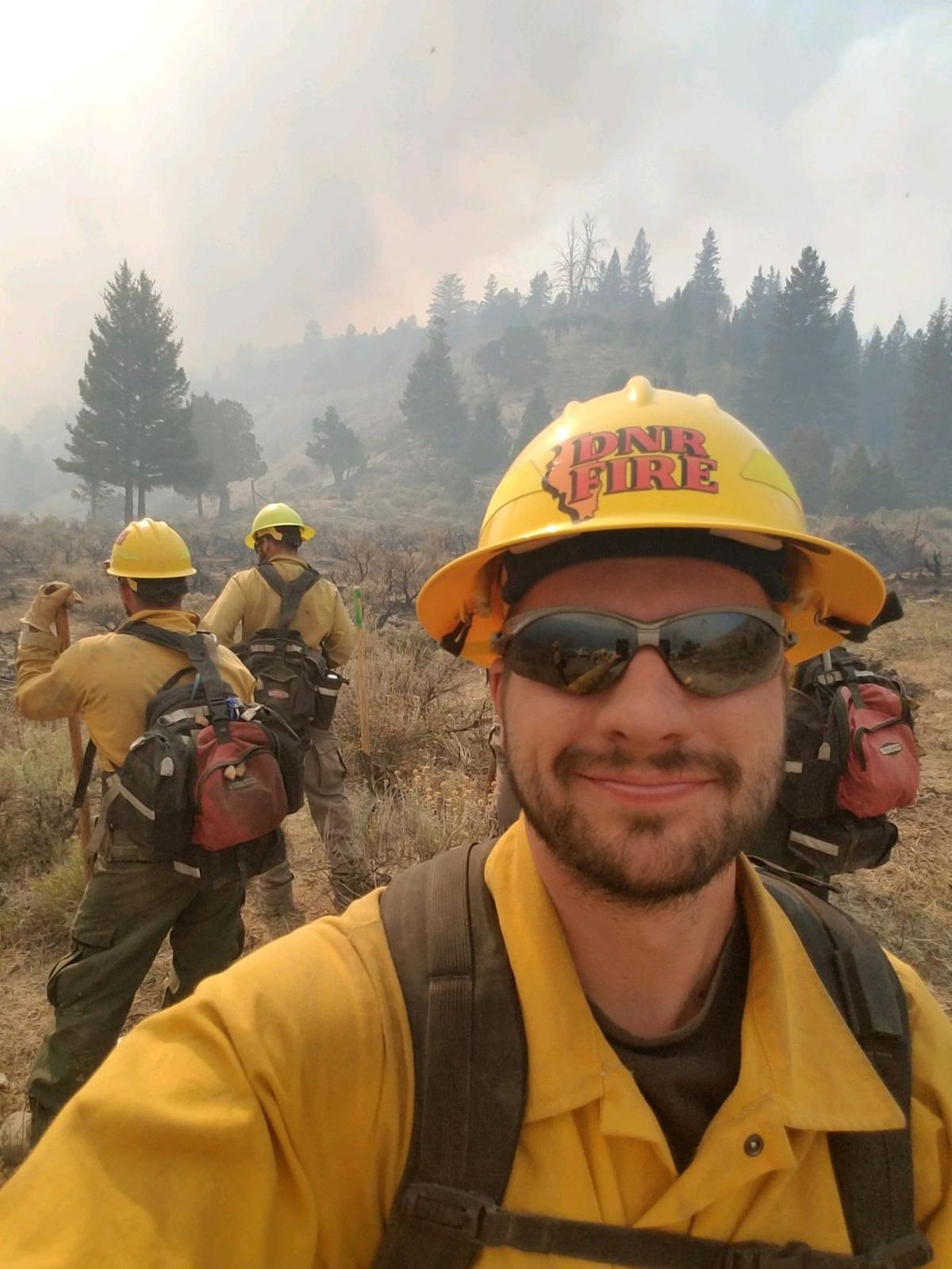 Larrin Nottke, a site technician at Kankakee River State Park for the Illinois Department of Natural Resources, is part of a handcrew dedicating weeks of their lives to containing the Dollar Ridge Fire near Heber City, Utah.

Larrin Nottke, a site technician at Kankakee River State Park for the Illinois Department of Natural Resources, is part of a handcrew dedicating weeks of their lives to containing the Dollar Ridge Fire near Heber City, Utah.

A 24-year-old Bonfield man has spent the past couple of weeks fighting wildfires in the western United States.

Larrin Nottke, a 2012 graduate of Herscher High School, works as a site technician at Kankakee River State Park for the Illinois Department of Natural Resources, where he has been employed for the past five years. This is his first time fighting a wildfire.

The DNR assigned Nottke and more than 10 other people within the department, known collectively as a handcrew, to help contain wildfires in Idaho and Utah.

“Handcrews are a diverse team of career and temporary agency employees with solid reputations as multi-skilled professional firefighters,” according to the U.S. Department of Agriculture Forest Service. Handcrews are split into five separate levels.

Nottke’s handcrew is known as a Type 2 crew, which commonly consists of seasonal workers who are not employed full time as firefighters. It consists of other DNR workers, including Stefanie Fitzsimons, of McHenry, and Bryan Eubanks, of Neoga, both district wildlife biologists, and Tom Gargrave, a regional forester from Oswego.

The handcrew originally was assigned to assist in the containment of an Idaho wildfire, located west of Yellowstone National Park. There are 10 active wildfires in Idaho, collectively spreading more than 100,000 acres of land.

After containing the Idaho wildfire, they immediately were reassigned to Utah, where seven wildfires are active throughout the state.

In Utah, Nottke and the other crew members are fighting the Dollar Ridge Fire, along with about 100 other personnel, located 36 miles southeast of Heber City. As of Thursday, the fire has covered about 60,000 acres of land and is 90 percent contained, according to InciWeb, a web-based management system providing continually updated statistics on wildfires and other natural disasters across the U.S.

Wildfires can spark at any time, begin for any number of reasons and are not always caused by human actions. The Dollar Ridge Fire was caused by lightning.

Handcrews from other states or even other countries, such as Australia, New Zealand and Canada, become necessary when wildfires become too large to be contained by the state’s firefighters, explained DNR district wildlife biologist Bob Massey, who has fought several wildfires in the past. Places such as Idaho and Utah are very dry so “nearly anything can spark a fire,” Massey said.

Nottke and the rest of the crew spend nearly all waking hours of their day attempting to contain the wildfire. It is not uncommon for the crew to work 18-hour days and leave the canyon tired, hungry and dirty.

Handcrew members generally will spend up to 14 days containing a wildfire. The crew might spend no more than three weeks away from home, including time spent working and traveling to and from the fire site.

The handcrew’s work mirrors standard military operations. They follow a strict chain of commands to complete their duties. Gargrave serves as the handcrew’s boss.

Since many news outlets are focused on the wildfires within California, those uninformed of wildfires might be surprised to learn wildfires can happen all across the country, and are most common in dry areas found in the western regions of the U.S.

“I don’t think many people know how many fires are burning outside of California and how many women and men are working 16-hour days, seven days a week in crude conditions putting their lives on the line,” said Larry Nottke, of Bonfield, Larrin’s father.

There have been more than 39,000 wildfires across the U.S. so far in 2018, according to the National Interagency Fire Center, a wildfire support center based in Idaho.

At this moment, more than 18,000 people fight wildfires every day, Massey said. There are 13,000 fighting fires in California, and the remainder are spread across the rest of the U.S.

Nottke and the other members of the handcrew have been fighting the Dollar Ridge Fire since July 23. As of Thursday, they are scheduled to complete their final work day on Saturday, and they plan to return home by Monday or Tuesday.

The Illinois DNR commonly sends handcrews to other regions of the U.S. — and sometimes outside the country — to fight wildfires, Massey said, as well as natural disasters such as hurricanes and tornadoes.

“It’s a win-win-win situation,” Massey said. The firefighters love what they do, the wildfire is one step closer to containment, and the state of Illinois has more qualified and experienced firefighters to claim as its own.