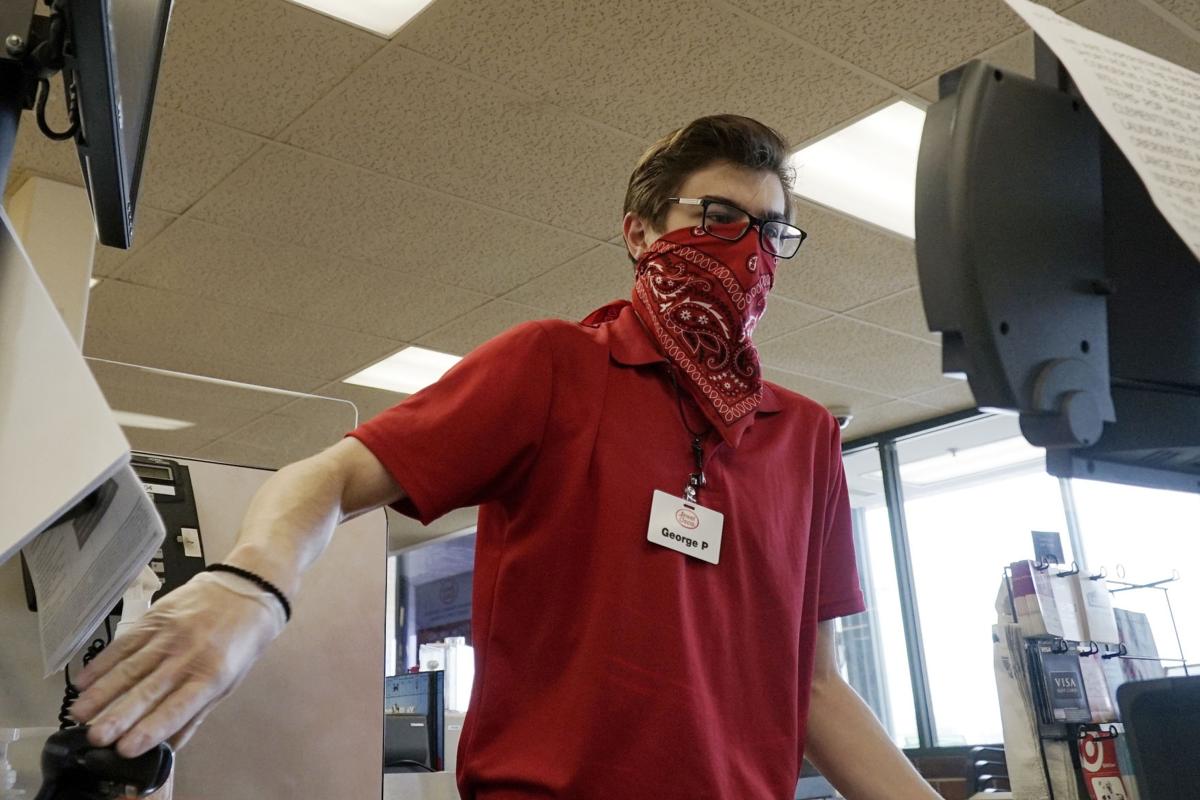 A cashier covers his face with a bandana at a Jewel Osco grocery store in Mount Prospect, Ill. on Saturday. The Centers for Disease Control and Prevention now recommends Americans consider wearing cloth or fabric face covering in public spaces. 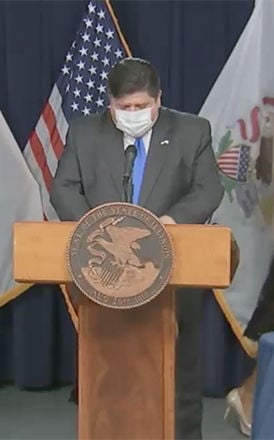 Gov. J.B. Pritzker wears masks as he arrives for a daily press briefing Sunday in Chicago. State residents are urged, but not required, to wear face masks when they are in public places to help slow the spread of COVID-19.

A cashier covers his face with a bandana at a Jewel Osco grocery store in Mount Prospect, Ill. on Saturday. The Centers for Disease Control and Prevention now recommends Americans consider wearing cloth or fabric face covering in public spaces.

Gov. J.B. Pritzker wears masks as he arrives for a daily press briefing Sunday in Chicago. State residents are urged, but not required, to wear face masks when they are in public places to help slow the spread of COVID-19.

The county now has 76 confirmed cases of COVID-19, according the Kankakee County Health Department. Positive cases have been reported county wide and the health department encourages residents to continue taking precautions and practicing social distancing.

Significant increases in both confirmed cases and deaths were recorded across the state of Illinois this weekend. On Thursday, Illinois had 7,695 cases recorded. By Sunday’s daily briefing by Gov. J.B. Pritzker and state health officials, that number stood at 11,256 while deaths were recorded at 274. The largest increase came Saturday, with state officials reporting 1,453 new cases and 33 additional deaths in one day.

Pritzker said the number of people to test positive in the state more than doubled in a week.

Boone, Calhoun and Gallatin counties are the latest to report cases, while the state reported the first deaths in Peoria and Montgomery counties on Sunday. Stateville Correctional Center in Crest Hill recorded its second inmate death from COVID-19. Ezike said the prisoner died at a local hospital, and Stateville has 60 cases of COVID-19.

Pritzker has recommended for the first time that people wear face coverings when venturing outside.

“This virus can be spread through droplets, like when you sneeze or cough,” Pritzker said. “So, blocking that by wearing a mask in public seems like a commonsense way to do what’s right for everyone. The most important thing you could do frankly is stay home.”

During his daily COVID-19 briefing on Sunday in Chicago, Gov. JB Pritzker said he had “given up” on an adequate coronavirus response from the federal government and announced an expansion of emergency child care.

He said the Head Start program has made it difficult for the child care providers funded by it to expand their services to emergency, essential workers. As a result, the state is expanding the eligibility for child care funding assistance for essential workers and increased financial support for emergency child care centers and homes.

Effective April 1, the governor said, all essential workers now qualify for the state’s Child Care Assistance Program, meaning the state will cover “most if not all of the cost of care” for qualifying workers.

“That includes everyone from nurses and doctors to support staff in hospitals, to grocery store clerks and food producers,” he said.

Information on the assistance is available at coronavirus.illinois.gov and at DHS.illinois.gov/helpishere.

Also effective April 1, the state will pay 30 percent above the usual reimbursement rates to emergency child care centers and homes.

Information on the programs is available on the Governor’s Office of Early Childhood Development website: www2.illinois.gov/sites/OECD.

Illinois needs thousands more ventilators than the federal government plans to send and the state is desperately searching for more before its expected peak in coronavirus cases later this month, Pritzker said during an appearance Sunday on CNN’s “State of the Union.”

He said he requested 4,000 ventilators from the federal government last Tuesday and has received 450, far short of even the 1,400 ventilators that Vice President Mike Pence said the state needs.

Underlining the state’s desperate need, the governor said: “Now, we’re looking everywhere and anywhere across the world to get ventilators.”

Pritzker warned that plans to move ventilators from New York to other virus hot spots after cases peak in that state may come too late.

“New York does not look like it will be coming off its peak by the time we’re hitting our peak,” he said.

And while the governor said he hopes Illinois only needs 4,000 ventilators, in one worst-case scenario the state may actually require more than 7,000.

“We’re looking at all of the numbers and everybody is taking an educated guess because we really don’t know — this virus is unpredictable,” Pritzker said.

For most people, the new coronavirus causes mild or moderate symptoms, such as fever and a cough that clear up in two to three weeks. For some, especially older adults and people with existing health problems, it can cause more severe illness, or death.

The Associated Press and Capitol News Illinois contributed to this report.

Illinois Department of Public Health continues to remind the community to continue following social distancing recommendations put in place by Gov. J.B. Pritzker's "stay at home" mandate, including the following:

• Staying home as much as possible

• Calling to check on family, neighbors, and older adults instead of visiting

• Checking with your provider about telehealth options if you feel ill

• Continuing to use proper hand hygiene

• Most importantly, stay home if you are sick

Avoid the Emergency Department and other places you seek healthcare if you are not severely ill, unless your doctor advises otherwise. Stay home and keep healthcare access available for others with more severe illness, the department said.

Consult with your doctor if:

• You are experiencing fever, cough, shortness of breath or other cold or flu like symptoms that do not improve after three to four days. Use telephone, text, telemedicine or a patient portal to reach out rather than going to your doctor in person if possible.

• You are an older adult or have chronic health conditions of concern (heart disease, diabetes, lung disease) and are exhibiting mild symptoms.