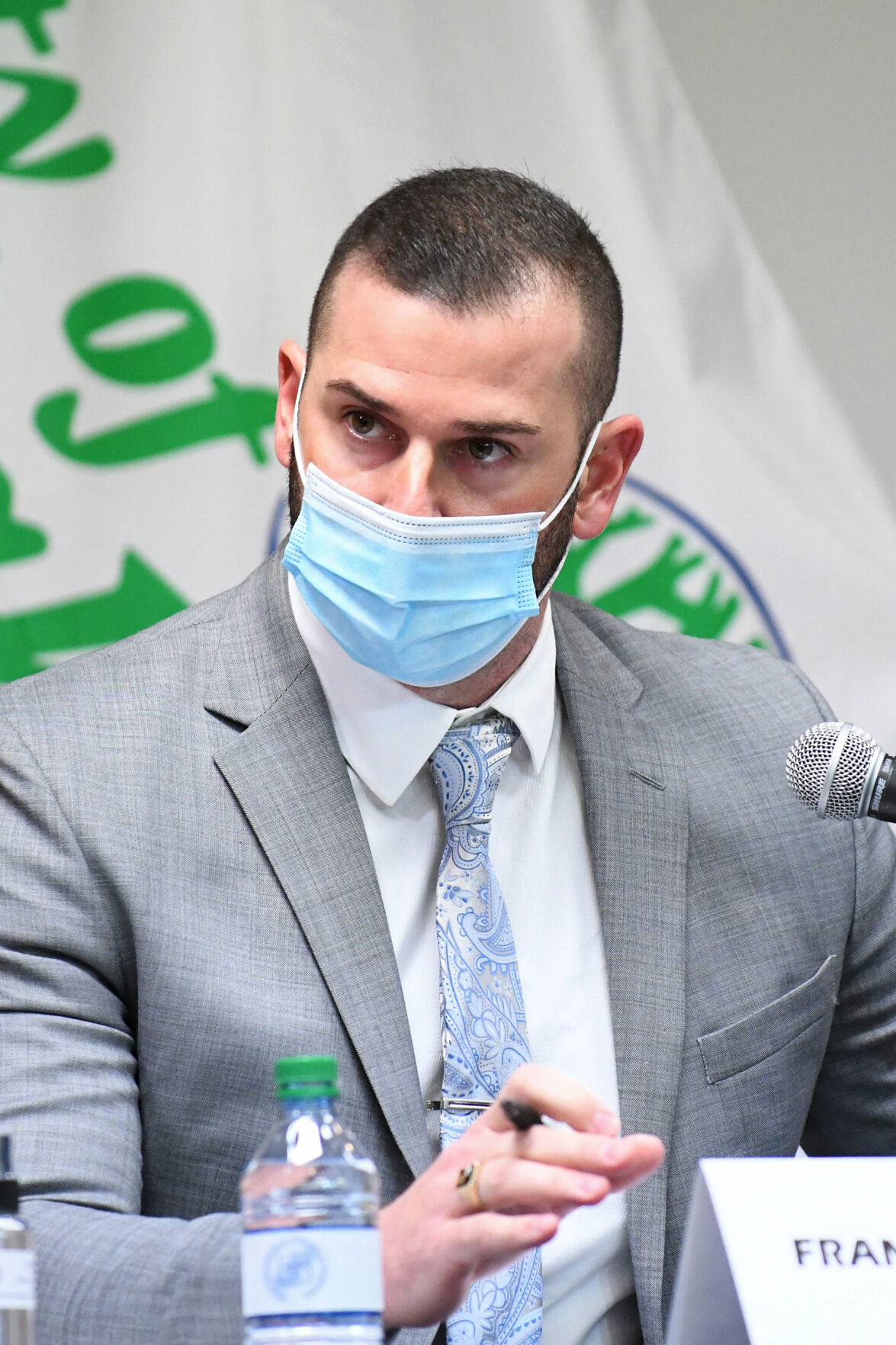 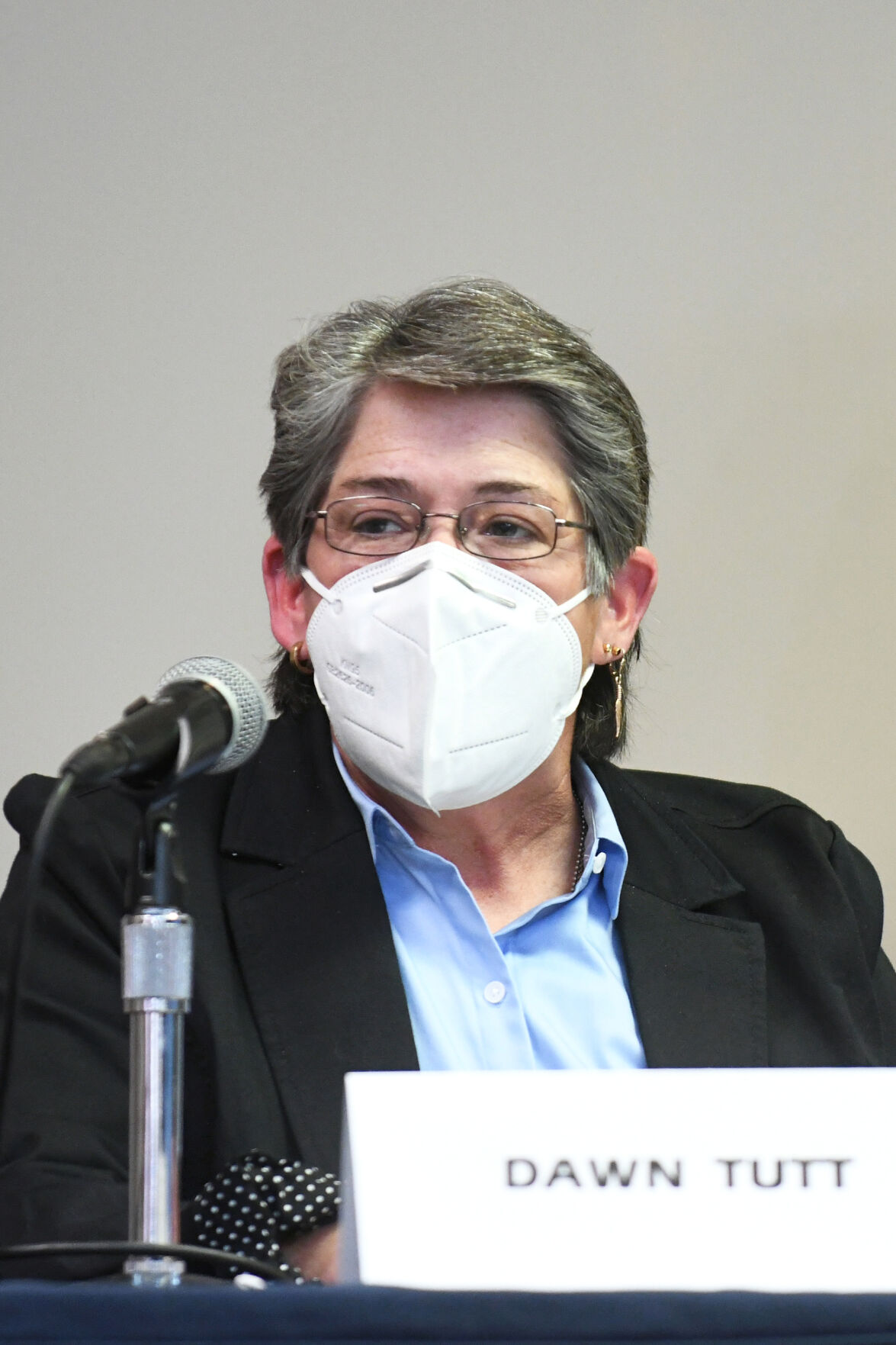 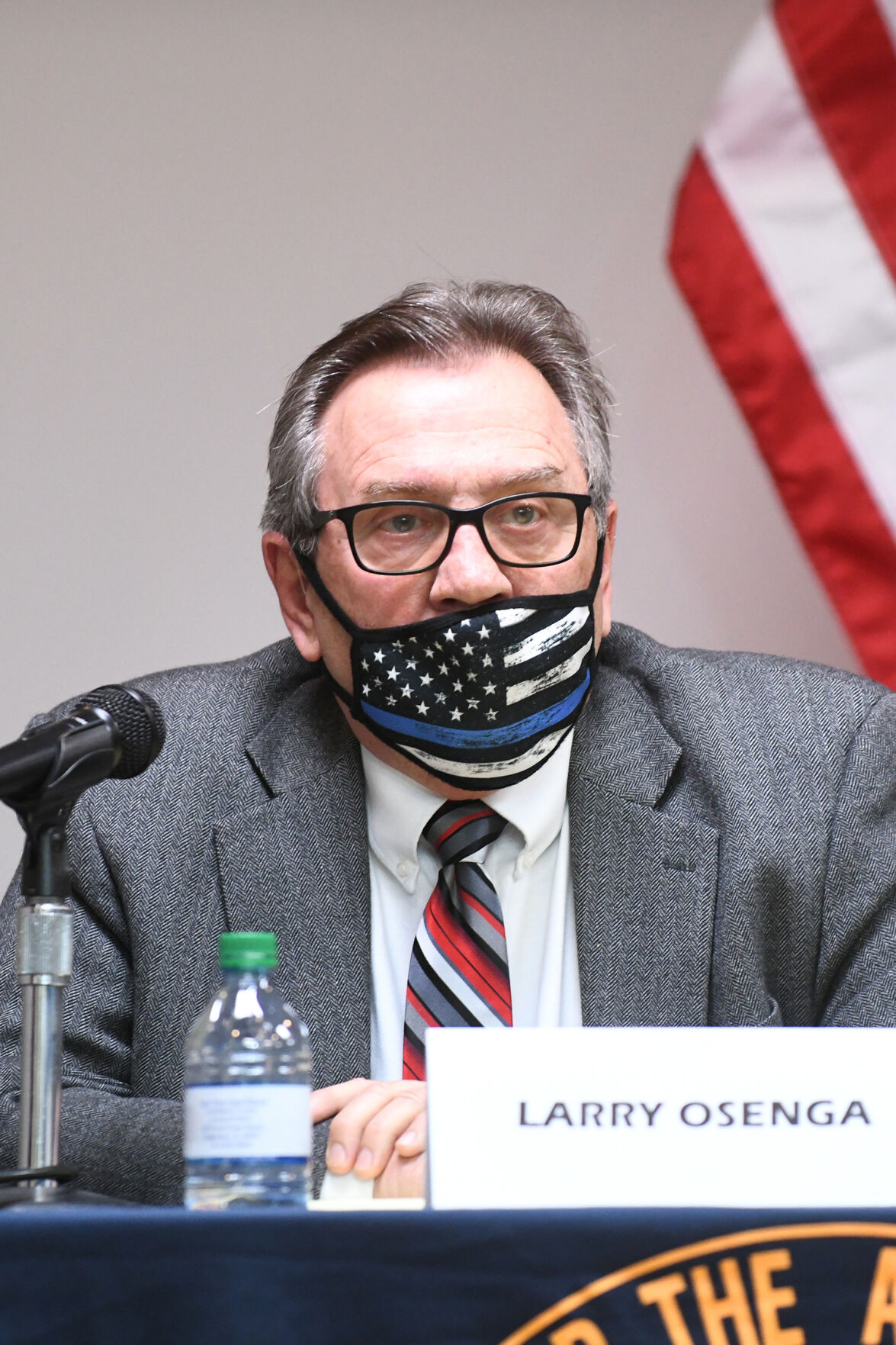 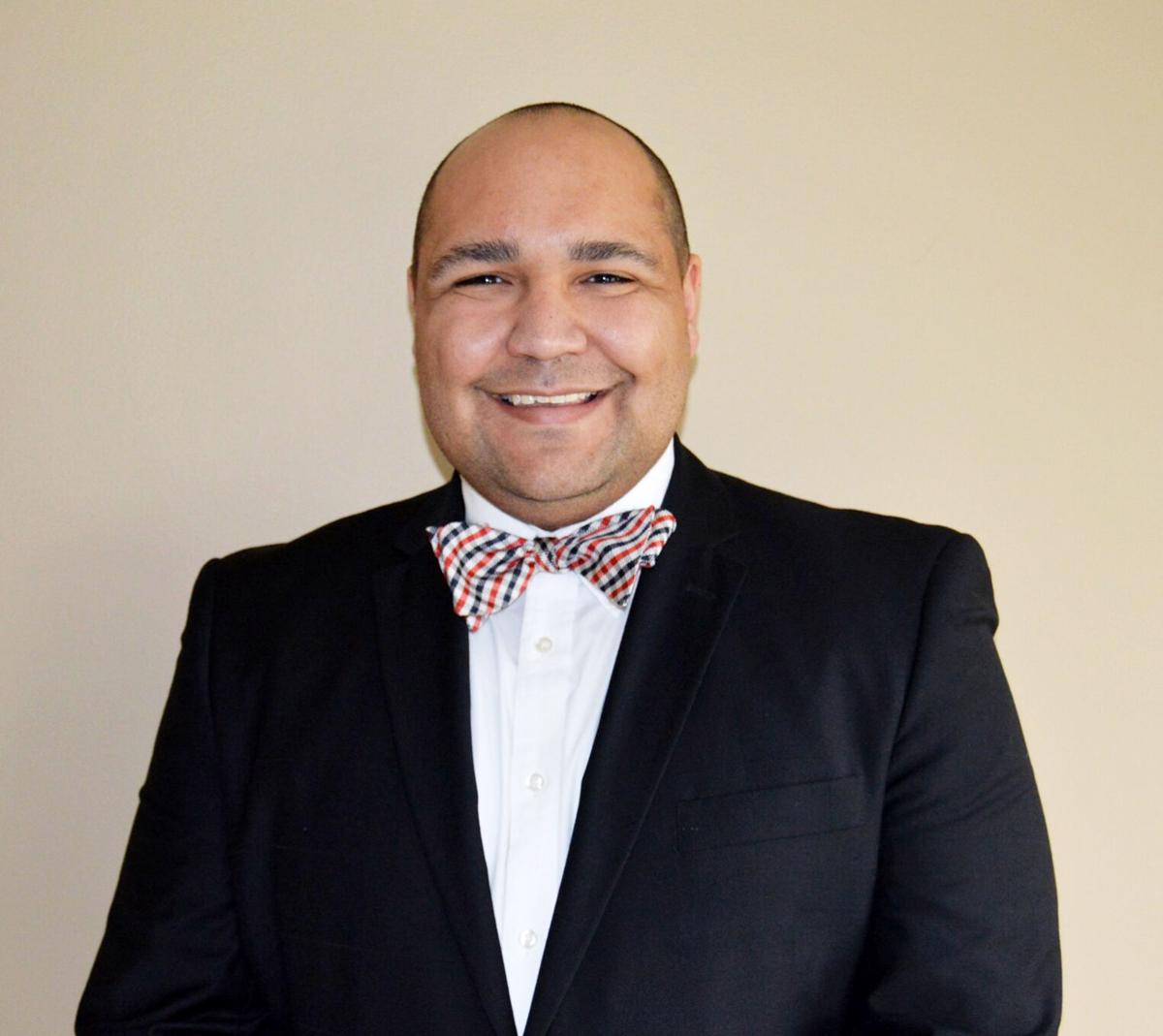 KANKAKEE — Candidates in the two Kankakee alderman races fielded questions ranging from how the city should address homelessness to how it should spent the recent influx of federal tax dollars during a Thursday evening forum.

The Kankakee County NAACP hosted the forum at the Kankakee Public Library as part of a series in the run-up to the April 6 election.

Seeking to retain his 3rd Ward seat, Republican Alderman Larry Osenga highlighted his time on the city council and as a former Kankakee police officer.

Meanwhile, challenger Ben Clark, running as an independent, spoke to his finance background and work as an accountant for Kankakee junior high and high schools.

Vying to represent Kankakee’s 4th Ward, Republican candidate Frank Hasik IV referenced his experience as a volunteer firefighter in prioritizing public safety, while Democratic candidate Dawn Tutt referenced her non-profit and volunteer background in placing importance on resources for the disabled and elderly.

Considering Kankakee’s historical challenges with equity, what are your suggestions to help Black and brown communities with housing issues?

Tutt: She would investigate grant programs and private sector dollars that could help bring better housing opportunities into areas of concern, as well as seek to include those populations in community meetings.

Hasik: He would reach out to the community with information on local classes that educate people on the homebuying process and things like credit scores, down payments and programs offering assistance.

Clark: He would work to educate the community on the homebuying process as well as down payment assistance programs provided through the city and local banks. He said the city should work with schools to help youth understand the process.

Osenga: Highlighted the city’s “very good community development” as well as its homebuyers program providing $2,500 assistance for down payments. “If you drive around the city, I don’t think there is any area that is more diverse than any other part. We have a very diverse community.”

What do you consider the greatest asset of your ward, and how can it be put to greater use?

Clark: “The greatest asset ... is the fact that we are a primarily residential ward. We have nice housing in the 3rd ward that will attract people … What we need is a nice downtown and a nice riverfront because [prospective homebuyers] want those kind of amenities.”

Osenga: “I think one of the greatest assets ... are the people that reside in the 3rd Ward. We have community meetings periodically, three or four times a year, and we have 30 to 50 people show up any time we have a meeting. …They are all willing to step up and do what is asked of them.”

Tutt: “We have a great amount of land, potential for industry and commercial development … I would like to see that continue, where you’re exiting off at 308 and coming into that south side, we need to keep growing and moving and developing, bringing businesses and industries into that area.”

Hasik: “We do have a huge expansion area down by the 308 for industry and economic development. Another thing is the parks in 4th Ward and the walking paths. We are primarily residential, so we do have that benefit of a lot of homeownership and pride in ownership.”

As a council member, how would you propose providing new revenues for the city in order to better the city and improve the quality of life?

Osenga: The city should start going to trade shows again to showcase what it has to offer for prospective businesses. “They just don’t throw a dart at the wall and decide we are going to start a business there.”

Tutt: The city should focus on attracting new businesses. “We can offer some TIF programs, as long as those TIF programs do not impact negatively the residents that actually live here.”

Hasik: “We have to work on public safety and economic development at the exact same time... I really think we should have a better tax abatement program for new businesses coming in.” The city should hire a public relations service and seek input from communities successful in attracting businesses.

Clark: The city should better advertise its assets, particularly for millennials looking to buy homes. “There are currently 13 vacant buildings in our downtown. That is an absolute gold mine that the city of Kankakee is sitting on.”

The Fortitude homeless services nonprofit was recently denied a permit to use an existing site as an emergency homeless shelter. Would you have voted differently? How should the city interact with the homeless population?

Tutt: “Yes, I would have voted differently. I thought a conditional-use permit on a trial basis would have been fair step … The location of the shelter is important for those utilizing the shelter to be able to access services: medical, educational, library, jobs, mental health, transportation.”

Hasik: “I was 100 percent for the amended version ... My question is, why is it always last minute? It always seems to be last minute with the city council, right before it starts getting cold out.” The problem should be looked at on a countywide level and not as a problem just in Kankakee.

Clark: “I am fully in support of a shelter for Fortitude... Kankakee is the only city with an ordinance in our county to house the homeless. That’s what we need to do.”

Osenga: “We have two shelters in Kankakee. We have Fortitude and we have Gift of God homeless shelter on North Fifth Avenue... The shelters need to work together. It seems like, when you talk to people, they are competing with each other instead of working together…”

With the recent influx of federal tax dollars to all communities, would you push for removal of the city’s vehicle sticker tax?

Clark: “I absolutely would push for the removal of the city’s vehicle sticker tax. We are getting $14.5 million. The city has gone out to bond for $1.4 million, and part of their bonding is for infrastructure. I’d also like to put $5.6 million into infrastructure, giving $1 million to each ward.”

Tutt: “We need to put some of this money back into the taxpayers’ hands. Give some relief, with potentially eliminating city sticker. We could do something to reduce some of the property taxes.”

Hasik: “We definitely need to know how we are able to spend it first... We currently have a pension crisis. It’s one of the worst.” Some of the money should be allocated to pensions and infrastructure.

It was punch and counter-punch for much of Thursday's mayoral debate between Mayor Chasity Wells-Armstrong and challenger Chris Curtis.

A decision regarding Destini Sutherland-Hall's place on the April ballot for the Kankakee city clerk race will be determined at a 10 a.m. hearing Monday.

Although early voting began in Kankakee County on Wednesday and ballots are before voters, there is a move to have a Kankakee candidate tossed from the ballot.

Learning first-hand the plight of homeless