The parents of a former Reed-Custer school district student have filed a federal civil lawsuit accusing the district of failing to end hazing that took place on the high school football team and led to the alleged sexual assault of their son in the summer of 2017.

Ricketts, Smith and Anderson remain in their positions.

The suit alleges the district did not follow policy in addressing hazing, abuse, bullying and assault, “which resulted in a significant injury to (the victim).”

While the lawsuit names the Brookman’s son, the Daily Journal is not identifying him since he is a juvenile. 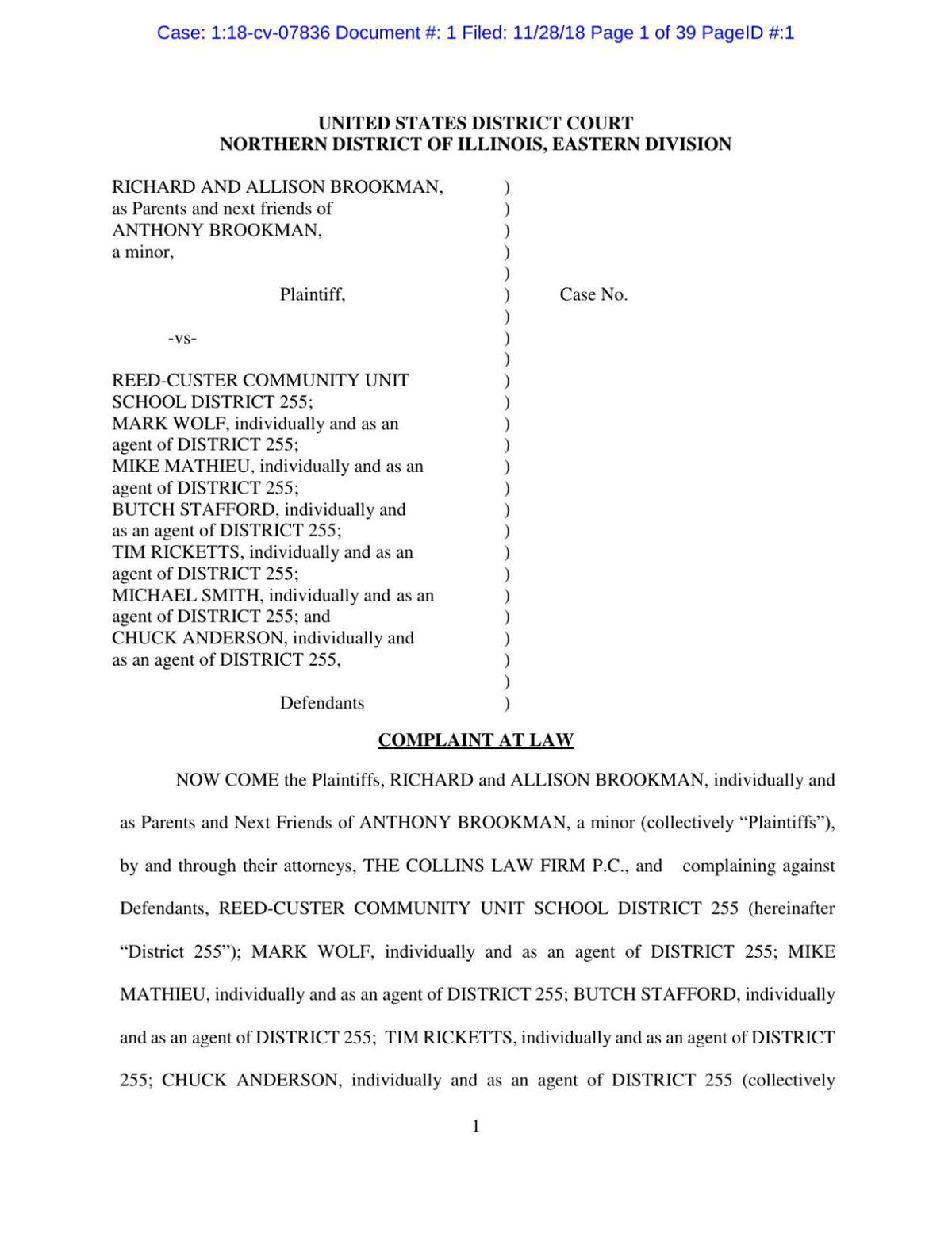 The Collins Law Firm of Naperville represents the family. The suit was filed in U.S. District Court for Northern Illinois in Chicago on Nov. 28. It argues the victim’s civil rights were violated.

“As a parent, myself, the district has an obligation to protect children from such actions. They (Reed-Custer) failed to protect (the victim),” attorney John Risvold told the Daily Journal on Wednesday.

The victim has transferred to another school district, Risvold said. He would not comment on where the family currently resides.

According to the lawsuit, the victim “was subjected to bullying, harassment and attempted sexual assaults as part of a culture of hazing and rituals known by the defendants. The lawsuit identifies four players, known as Doe 1-4, as being the ones who harassed, bullied and assaulted the victim.

The physical and sexual assaults occurred during the summer of 2017, between the victim’s eighth grade and freshman year.

According to the lawsuit, the boy “was the victim of a vicious sexual assault” committed by high school students who were members of the football program on July 19, 2017.

“Defendants were aware of, or tacitly acknowledged, a culture of abuse, hazing, bullying and assault, which resulted in significant injury (to the victim).”

The victim and his parents reported the sexual assault to the Braidwood Police. He was treated for his injuries at a Joliet hospital. 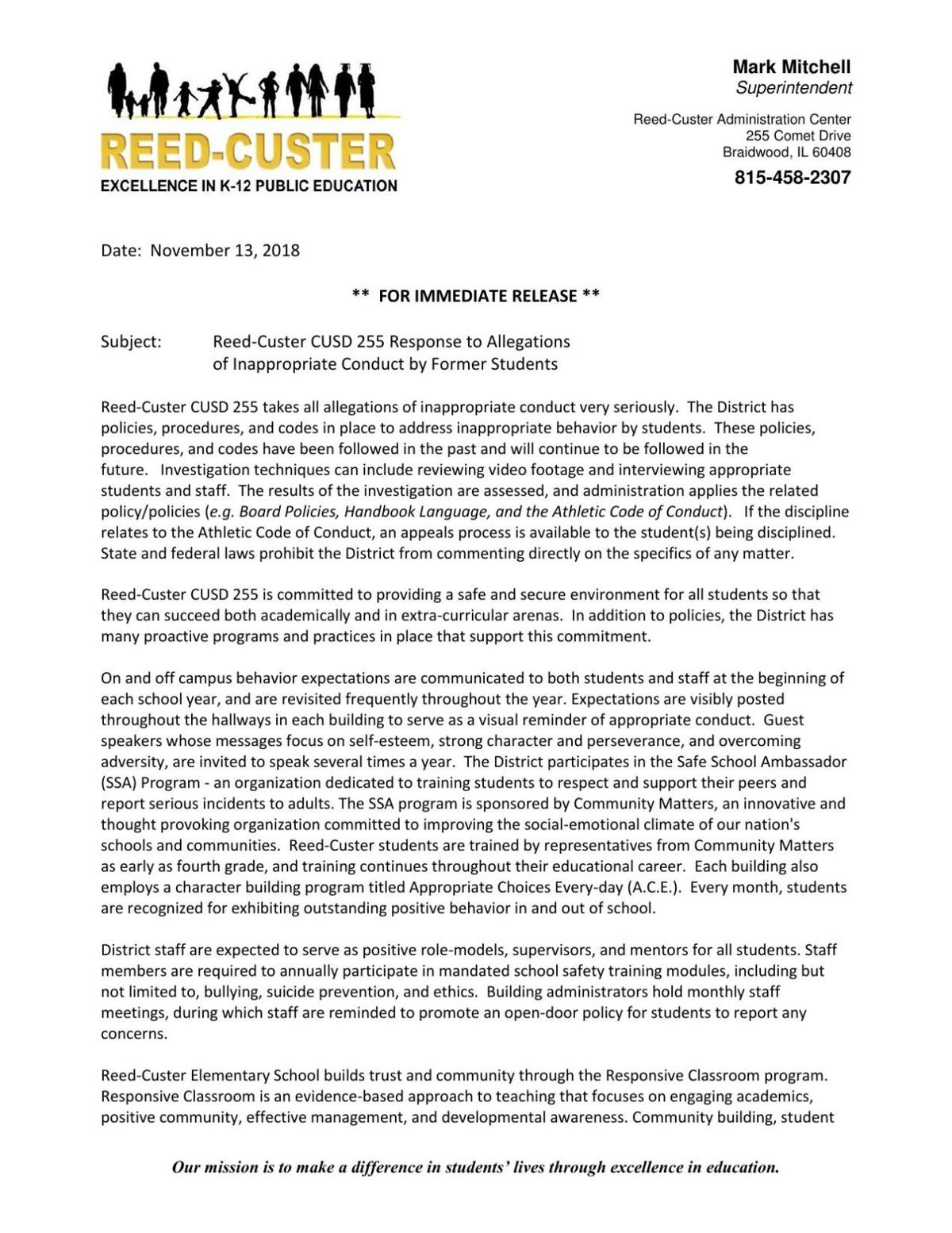 State law mandates the names of juveniles cannot be released.

The suit said the district, administration, coaches and staff did not follow school policy in regards to incidents of hazing and bullying. That included not contacting police or DCFS in regards to the incidents of abuse the victim sustained.

The lawsuit said after that the victim “was subjected to significant bullying, hazing, harassment and retaliation.”

“We unequivocally deny the plaintiffs’ allegations that school district officials ‘were aware of, or tacitly acknowledged, a culture of abuse, hazing, bullying and assault toward the individual; that hazing has been ‘part of the culture of the Reed-Custer football team for years;’ and that ‘coaches have either sanctioned these rituals or turned a blind eye toward them,’” superintendent Mark Mitchell said in a release.

“We intend to vigorously defend these baseless allegations and protect the reputation of our fine school district and its staff.”

The victim suffers from depression and post-traumatic stress disorder. Risvold said the victim is in counseling.

The suit alleges they “were given modest or no suspensions. No football players were removed from classes or otherwise suspended from school ... no disciplinary action was taken against any coach following the sexual assault of (the victim).”

“The high school administration or football coaching staff took no further action to address hazing on the football team following the incident on July 19, 2017,” according to the suit.

The Brookmans are asking for monetary damages, as well as costs incurred in bringing the suit.

The school district will have time to file a response. There are no new court dates set at this time.

The Associated Press contributed to this report.

This statement from Reed-Custer School District was released on Nov. 13 in regards to the July 19, 2017 incident of an alleged assault of a student by other students on high school grounds.

Superintendent Mark Mitchell said it was released when the school learned that a media outlet was investigating the 2017 incident. An email was sent to parents, and the release was posted on the district's website;

"On the evening of July 19, 2017, Reed-Custer CUSD 255 personnel were advised of an incident that occurred during a summer football camp earlier that evening.

"The incident involved a few athletes and occurred outside the football locker room. The incident was witnessed by numerous athletes.

"The coaching staff did not witness the incident as they were in the football locker room passing out and fitting equipment for participants in the camp.

"The District started a thorough investigation that same night.

"Those athletes involved in the incident were promptly disciplined in accordance with the District’s Athletic Code of Conduct.

"In addition, the Braidwood Police Department and Will County State’s Attorney investigated the incident and the School District cooperated in that investigation as permitted by federal and state laws.

"Those laws prohibit the District from publicly commenting directly on the specifics of any incident; however, Reed-Custer CUSD 255 is committed to providing a safe and secure environment for all students so that they can succeed both academically and in extra-curricular arenas.

"The District has many proactive programs and practices in place that support this commitment."

Visit daily-journal.com to see a copy of the lawsuit filed against the Reed-Custer school district and the district's response to the incident that led to the suit.