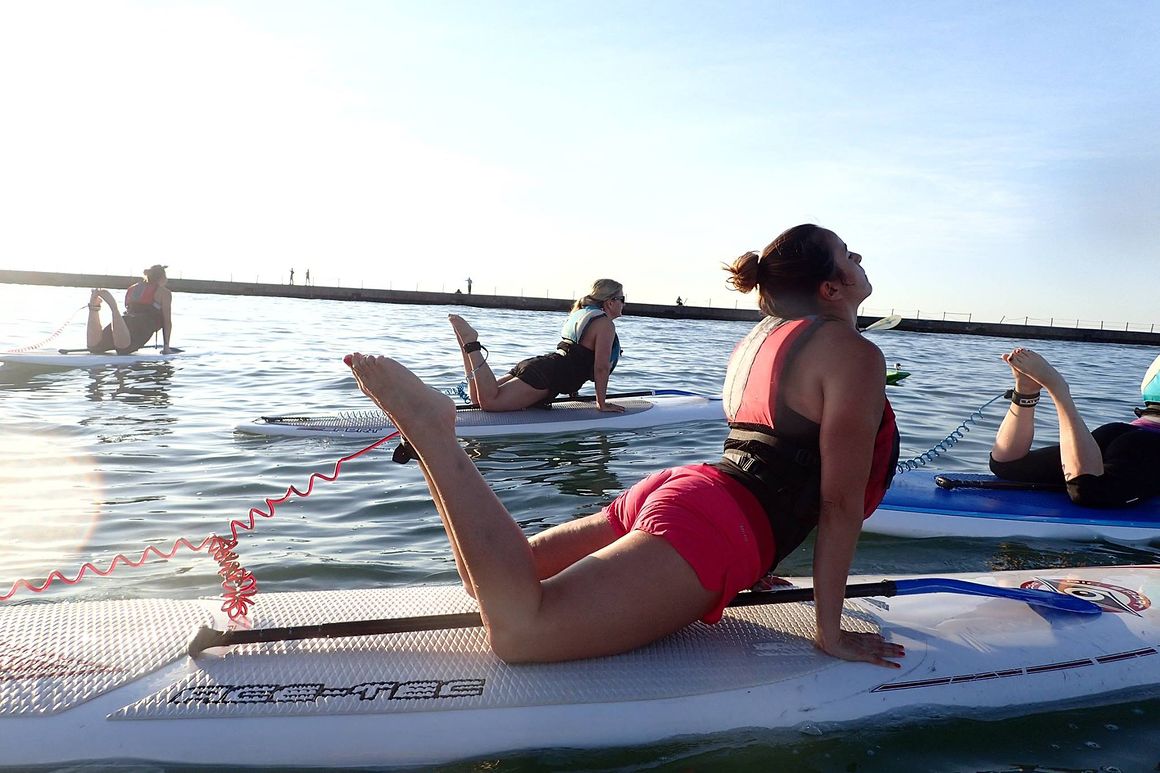 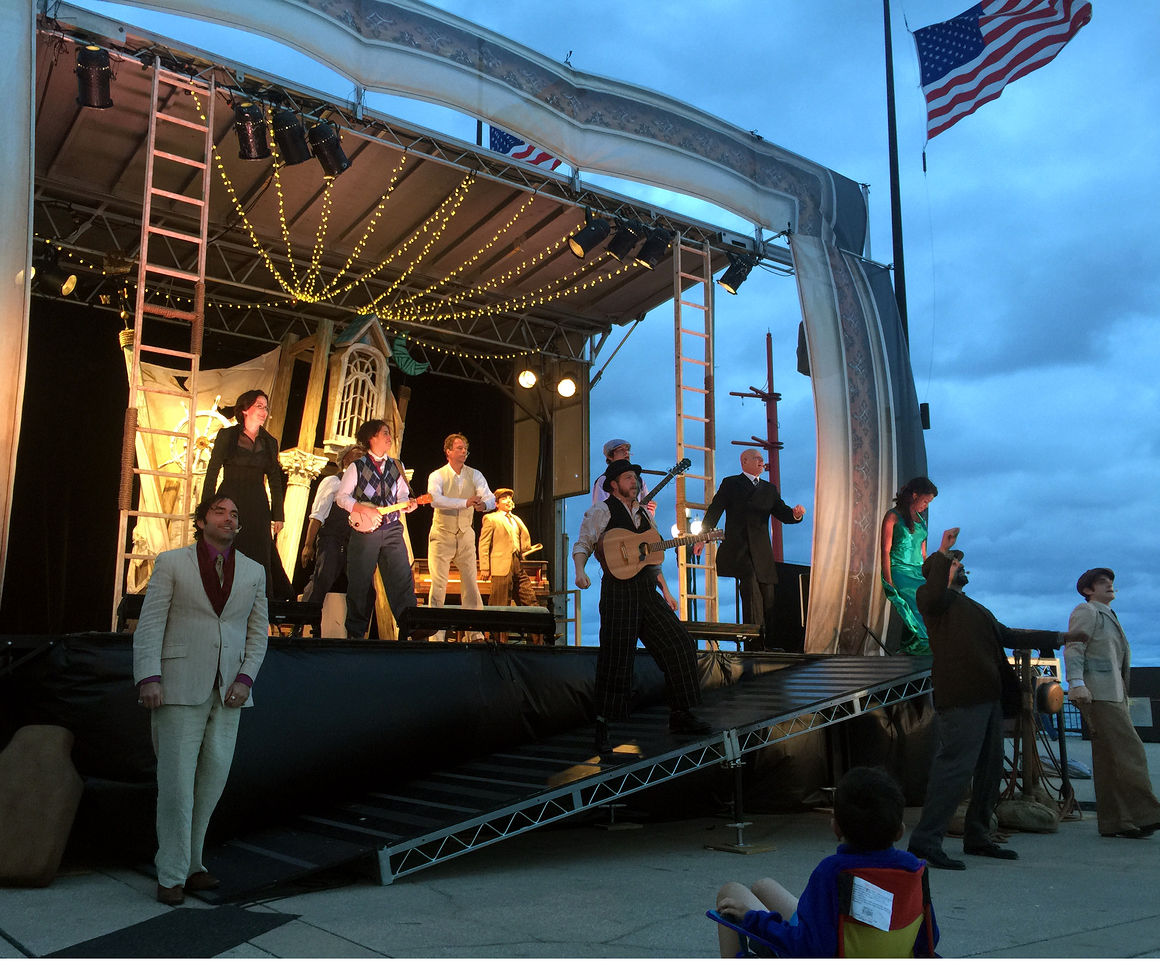 The actors of Chicago Shakespeare Theater's production of "Twelfth Night" sing to the audience at Navy Pier. 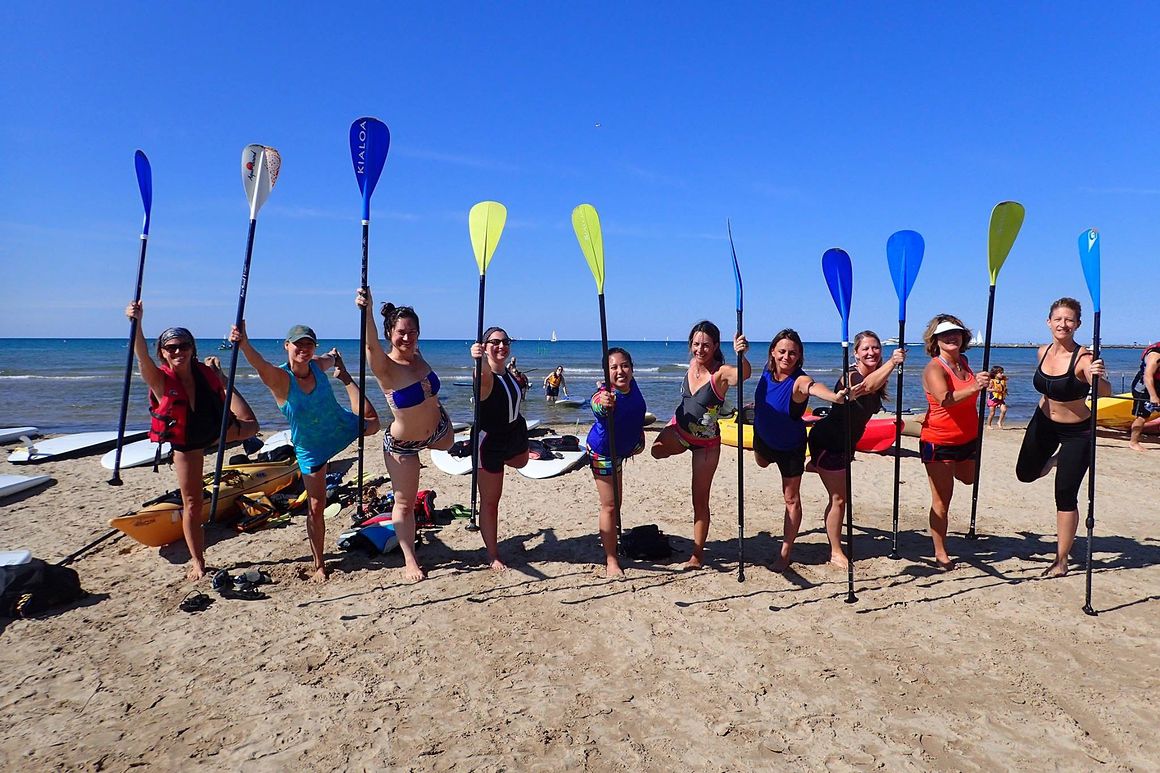 The Chicago SUPYoga class does dancer pose to celebrate finishing the hour and a half long Standup Paddleboat Yoga class at Montrose Beach.

The actors of Chicago Shakespeare Theater's production of "Twelfth Night" sing to the audience at Navy Pier.

The Chicago SUPYoga class does dancer pose to celebrate finishing the hour and a half long Standup Paddleboat Yoga class at Montrose Beach.

EDITOR'S NOTE: Mary Hall is a 23-year-old writer with an adventure streak. In this month's Windy City Wander column, she seeks out two adventures on Lake Michigan: Shakespeare in the Parks at Navy Pier and SUPYoga at Montrose Beach.

It was a hot, breezy afternoon that I found myself right on Lake Michigan at a Standup Paddleboard Yoga (SUPYoga) class. SUPYoga is sweeping the country as one of the newest fitness crazes, which involves practicing yoga on a 10- to 12-foot-long board on the water: the ocean, a lake or even a slow-moving river.

For those not familiar with paddleboarding, it's a water sport that started in 1940s Hawaii, although navigating through water standing with a paddle can be traced back as long as man.

As both a water and yoga lover, when I came across an ad for the sport on Lake Michigan, I was hooked. I found the class at Dabble.com, which advertised it as suitable for all yoga levels. There's even a SUP With Your Pup class offered, where you can bring man's best friend on the waves with you.

The photos look serene — floating boards, closed eyes and beautiful poses. I set out to see if it really was suitable for all levels.

It was a warm, windy day when I arrived at Montrose Beach for the class. It's a popular beach fenced by skyscrapers. The class started with a short tutorial on the sand with instructor Mary Lou Cerami. Only one in our class (not me) had ever paddleboarded before, so she demonstrated the correct way to paddle, turn, get on our boards and stand.

That's where I learned it's a little bit more chaotic than it looks in the photos, at least for a beginner. Dressed in life vests, we navigated just past the waves breaking and attempted to stand up and paddle.

It's not as hard as I expected, although fighting the waves on a windy day was challenging. But that's the whole point. Yoga always has been about balance in your environment. Whether you're holding the pose perfectly, sitting in child pose just feeling the waves or falling in, it's that connection to nature and yourself that's important, Cerami said.

One of the best things about the class is Cerami's attitude; she made it easy to relax and accept where the waves took me (even when it was in circles).

We paddled over to a cove, where we anchored to do the yoga class. It was fun to hold poses while being rocked in the waves, and when you got hot, you could just cool off. It was a little hard to hear above the wind and do bridge in a life vest, but I appreciated the free and lighthearted attitude that didn't let you take yourself too seriously.

As we lay in Savasana to finish the class, my feet in the water, the breeze and the sun on my face, it was easy to be thankful.

So now to answer the question I know you're thinking: How many times did I fall in? Not once!

Break the boredom with the Bard

The night before, I had made my way through Chicago traffic, then through crowds to the edge of Navy Pier for one of my favorite summer traditions: Shakespeare in the Parks.

My friends and I — we're now in our third summer of attending — found a small gap just in front of stage right, laid down our blankets and joined 2,400 audience members in laughing, listening, humming to music, cheering on a boxing match (Shakespeare and boxing — What?) and falling in love.

If you haven't experienced Shakespeare in the Parks, the time is now. A five-year tradition, the very talented actors of the Chicago Shakespeare Theater present in 19 neighborhoods all over Chicago each summer. The shows are free and only 75 minutes long. There are even ASL-interpreted performances at six of the 19 tour stops. Interested? There are nine performances left between now and Aug. 19.

This year's show is "Twelfth Night," a comedy and perhaps the one that put "love triangle" into our vocabulary. It's a silly story, really: Spanish twins, Sebastian and Viola, are separated in a horrible storm that leaves them shipwrecked in a distant land. Upon seeing the Count of this land, Viola dresses as a page boy to win his affection. He, of course, is in love with another, Countess Olivia, who, thinking she's a boy, falls in love with Viola. For Amanda Bynes fans, it's the play "She's the Man" was based on.

But what makes this production incredibly kid, family — and even adult — friendly is the way it's presented. The old language is articulated with modern expressions and intonation, so it's easy to understand. This theater company does a wonderful job of staying true to the play while using costuming, props and set pieces to keep things current.

For example, Viola travels the countryside on a bright yellow fixie bike, and the play's "fight scene" is delegated to a boxing ring with commentary and audience participation.

Later, a young boy who's parked himself in a small chair becomes a part of the story as actors come up and ask his advice. And don't forget the court "fool" who entertains the nobility with songs more likely found on a top 100 chart than medieval England.

Whether 16 or 60, whether you've read every play or fell asleep during freshman English class, this season's production of one of Shakespeare's funniest is definitely a hit.

Shakespeare in the Parks "Twelfth Night": Find a full map and schedule at chicagoshakes.com/plays_and_events/parks2016. Free.