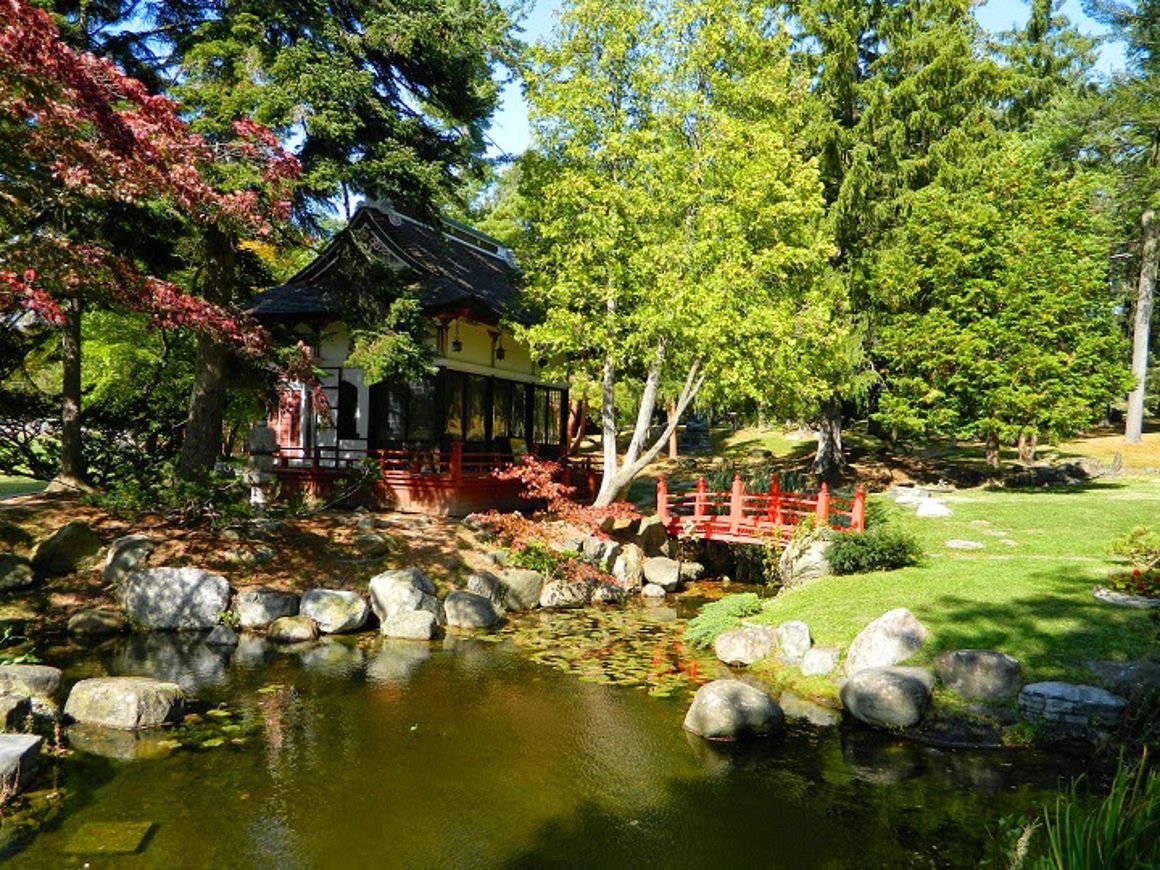 The Japanese garden at Sonnenberg includes an authentic Teahouse. 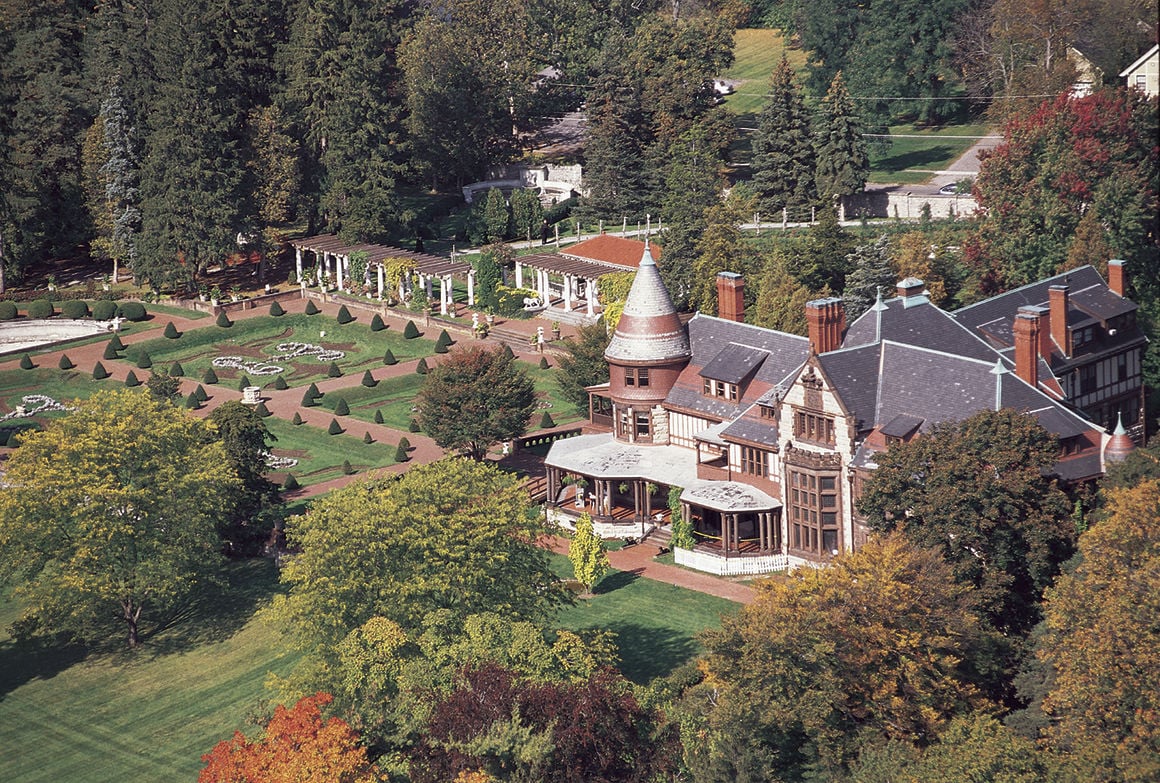 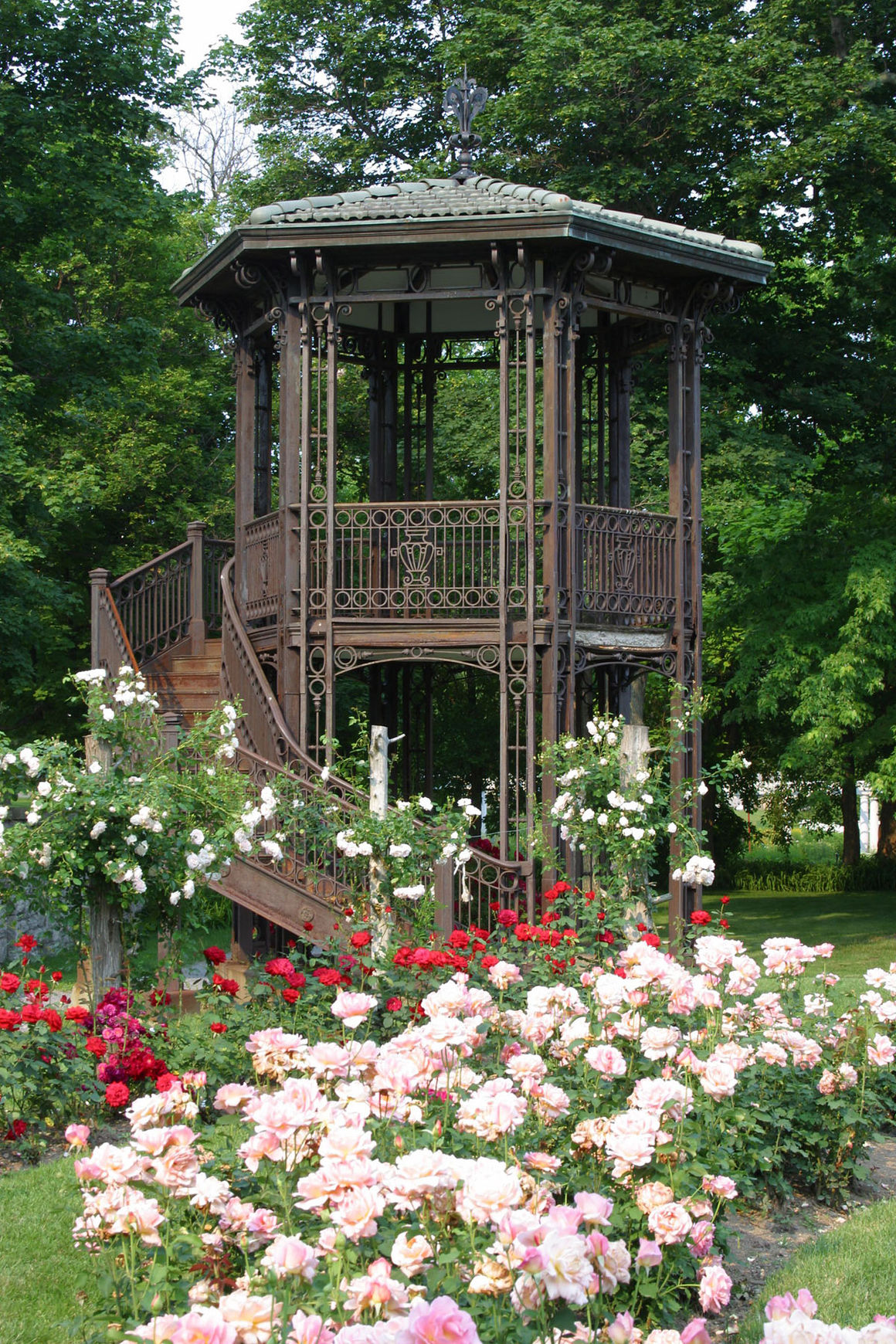 This iron gazebo serves as a viewing platform to see the roses at Sonnenberg Gardens.

The Japanese garden at Sonnenberg includes an authentic Teahouse.

This iron gazebo serves as a viewing platform to see the roses at Sonnenberg Gardens.

A visit to Sonnenberg Gardens & Mansion State Historic Park in Canandaigua, N.Y., is a tribute to a love story as much as it is to history.

One of only five New York State Historic Parks sites, Sonnenberg was built between 1885-87.

Today, the remaining property consists of a 50-acre parcel of land in the heart of Canandaigua; it was honored with public garden status in 2004.

Sonnenberg, which means "sunny hill" in German, includes a sprawling 40-room mansion once owned by New York City bank financier Frederick Ferris Thompson and his wife, Mary Clark Thompson, the daughter of a New York State governor. It was their summer home. Today, their summer escape has become a portal into the gilded age for 35,000 visitors per year.

According to our guide, Sonnenberg is one of a few Country Place Era Estates remaining in the country. These estates are distinctive for their collections of period architecture and period gardens.

In 1865, the Thompsons began to purchase land in upper New York State and used it as a working farm; fresh produce and flowers were delivered weekly to their home in New York City. In 1885, they used part of the 300-acre property to build a summer home in the Queen Anne-style and called it "Sonnenberg." When guests would visit and the question was asked — "What can I bring?" — the answer was always, "Bring a tree."

Because of the respect the Thompsons had for nature, the property grew into one of the largest arboretums in the country. When Mr. Sonnenberg passed away in 1899, Mrs. Sonnenberg began to redesign the gardens as a tribute to him. Between 1902-19, she created a variety of themed gardens of the world in his memory. In all, there are nine formal gardens.

There is an Italian garden that was planted in 1903, a rock garden and a Blue & White blossoms garden. Reportedly a favorite of Mrs. Thompson's, it was restored in 2007.

The Japanese Garden was created by a Japanese landscape designer and his team of workers; water flows from a cascade, passes a Tea House and beneath five bridges. A 12th-century bronze Buddha anchors the area.

The Rose Garden, circa 1906, includes red, white and pink blooms that were Mrs. Thompson's original color scheme.The garden hosts Roses & Rosé, one of the many events held at the park.

A stop at the Lord & Burnham Greenhouse complex is a highlight of a tour. Construction of the greenhouses began in 1903 and was completed in 1915. It is the oldest wooden, not modified and working greenhouse in the state and the second oldest in the country. Five of the greenhouses are open for tours.

Reportedly, Mrs. Thompson was enamored by orchids and the tropical greenhouses provided her with a "slice of the Caribbean." There is a castle-like structure near the "Old-Fashioned Garden" that was once part of an aviary that housed 216 different species. An adjacent structure was used as a peacock house.

Guided walking tours are included with admission; smartphone tours can be accessed via smartphones, too. There are a number of special events planned from April through December. Any should enrich an experience spent in the beauty and romance of the Gilded Age at Sonnenberg.

Sonnenberg Gardens & Mansion State Historic Park: The 50-acre estate is one of two public gardens in the New York State Parks system. Founded as a summer escape during the Gilded Age, the mansion and grounds provide respite during the year to visitors from all around the world. The property is opened seven days per week, rain or shine, May 1 through Oct. 31 with some extended summer hours. Admission is charged. No pets. sonnenberg.org.

Finger Lakes Visitors Connection: Canandaigua was originally the western frontier of the United States. The area evolved into a culinary, agricultural and heritage destination that includes the entire Finger Lakes region. visitfingerlakes.com.

Bring the kids! With formal gardens and a Queen Anne-style, 40-room mansion, Sonnenberg Gardens & Mansion State Historic Park is a sight to behold. It is also a great place to bring the kids. Children 12 and younger visit free at Sonnenberg and can try the Kids’ Trail Adventure, a scavenger hunt. This scavenger hunt uses hidden signs and clues along the path through the gardens to find and collect stamps to complete an adventure map. Collect all of the stamps, and win a prize.

Food & wine: An on-site cafe provides a light menu with as assortment of crepe sandwiches, soups, salads, fruit and cheeses plus desserts. Smoothies are a specialty, and soy-based is an option. Similar to its name, the High Noon Cafe opens at 11 a.m.

The Finger Lakes Wine Center, a member of the Canandaigua Wine Trail, is housed in the historic Bay House near the conservatory. Garden admission is not required. The tasting room offers a rotating inventory tasting bar with 10 to 15 different wines. Its 1911 stained glass Tiffany-style window was created by the Pike Stained Glass Studio in nearby Rochester, N.Y. Its image also is featured on the label of “Abundance” wine, produced by the Sonnenberg vineyard.