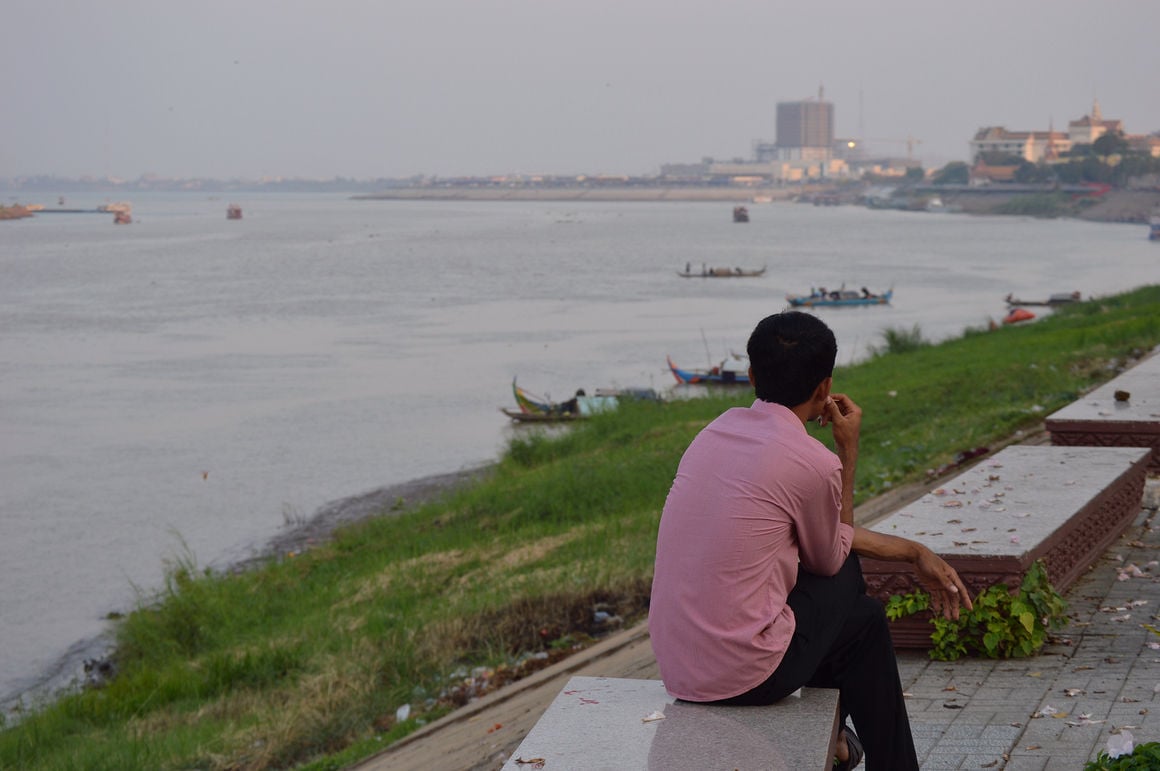 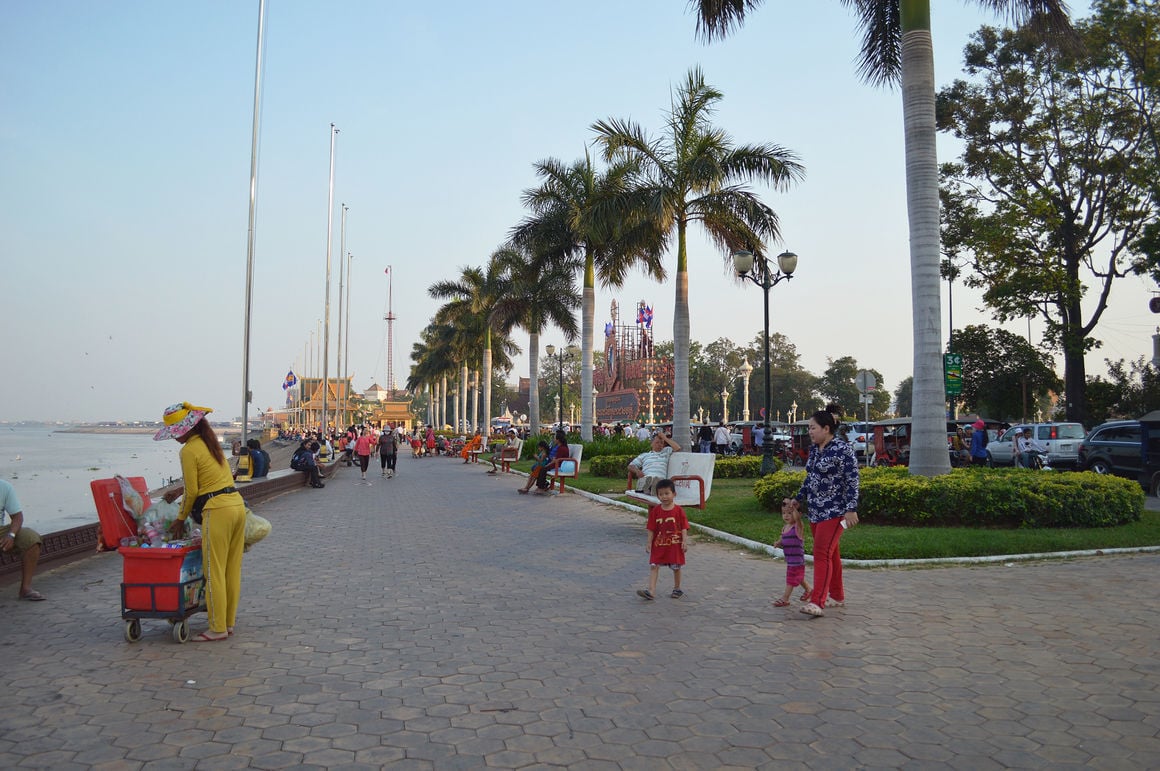 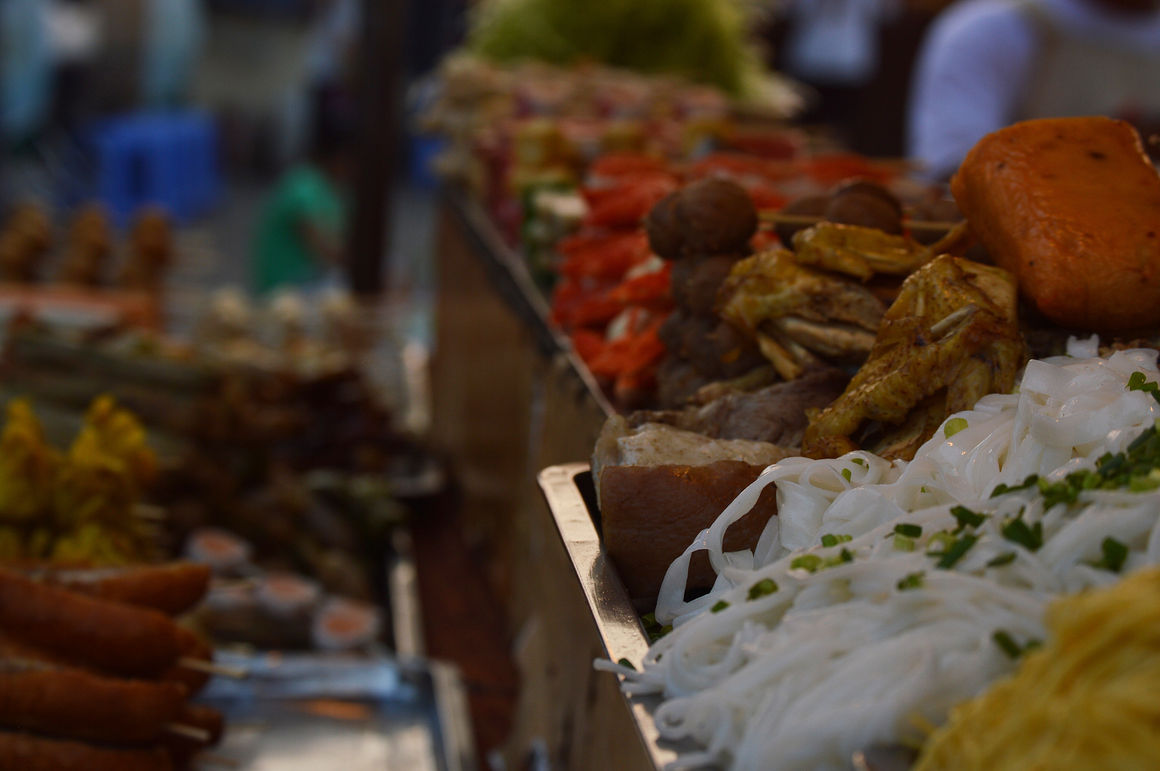 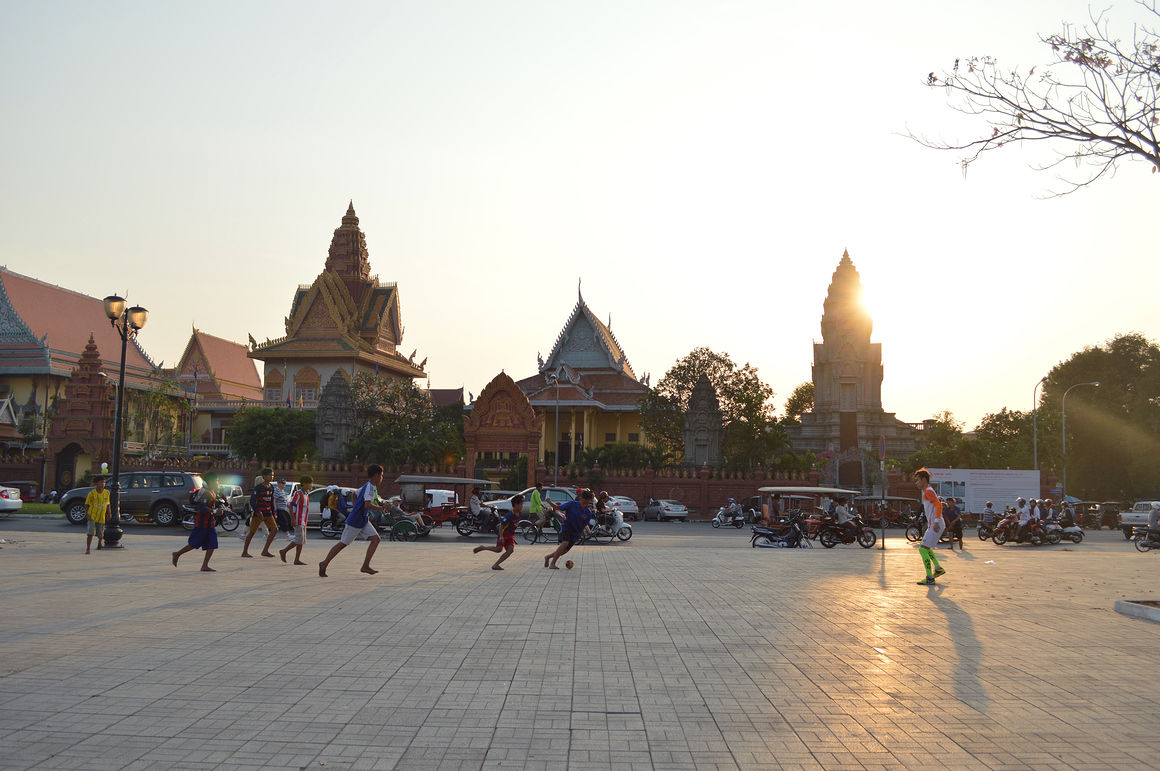 Boys play soccer in front of the Royal Palace on the River Walk. 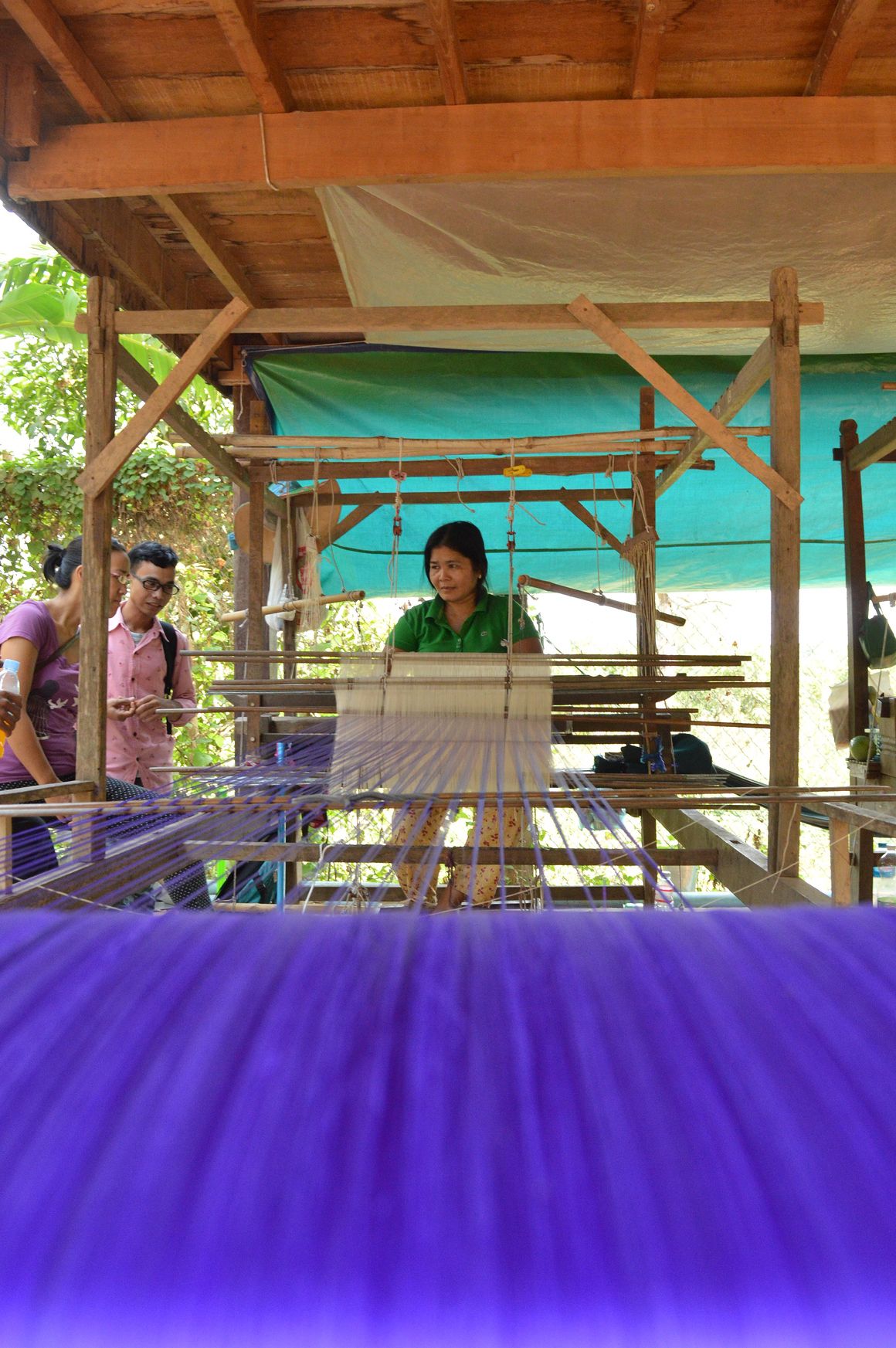 Visitors learn how silk scarves are loom-woven on Silk Island. 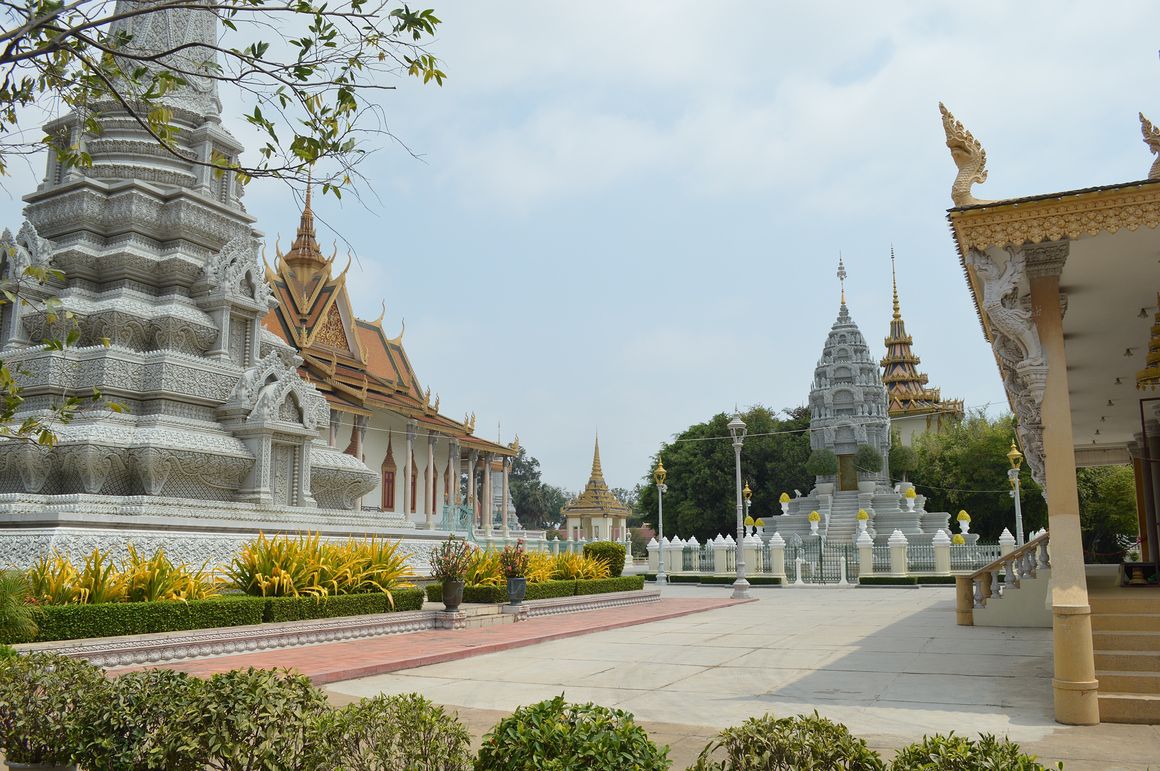 Stupas, or the burial sites of former kings of Cambodia, stand in the Silver Pagoda pavilion of the Royal Palace. 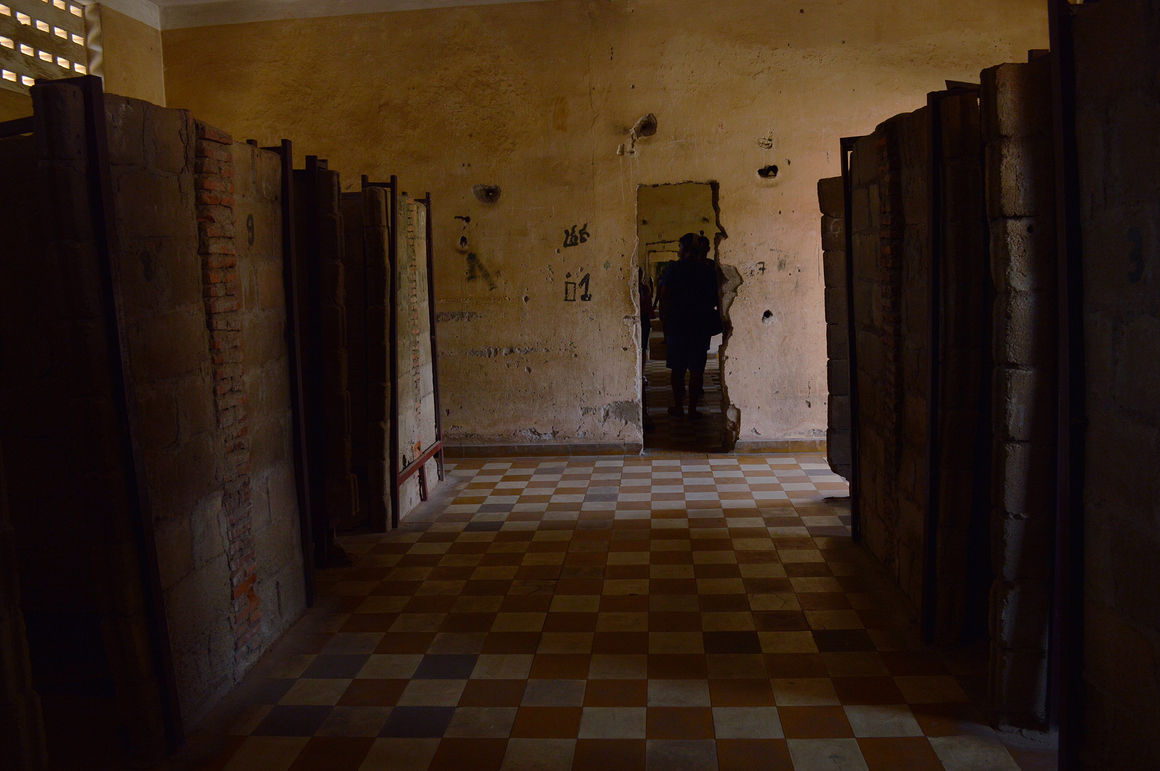 A woman walks through the halls of Tuol Sleng Genocide Museum. As many as 17,000 prisoners over 4 years were held in the rooms, once a high school classrooms. 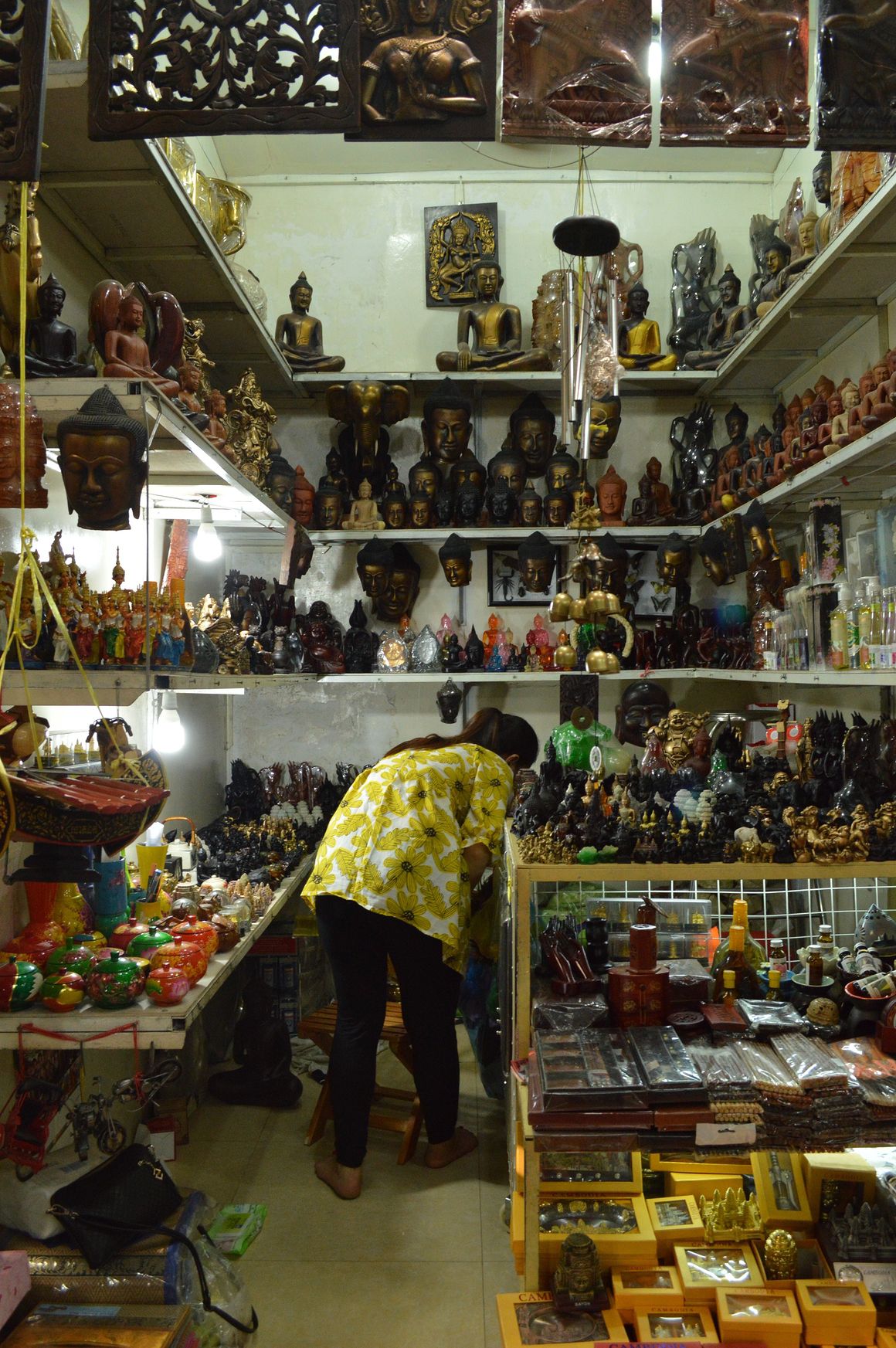 There's a little of everything sold in the Russian Market, from stone Buddha statues to ivory teapots to bottles of essential oils.

Boys play soccer in front of the Royal Palace on the River Walk.

Visitors learn how silk scarves are loom-woven on Silk Island.

Stupas, or the burial sites of former kings of Cambodia, stand in the Silver Pagoda pavilion of the Royal Palace.

A woman walks through the halls of Tuol Sleng Genocide Museum. As many as 17,000 prisoners over 4 years were held in the rooms, once a high school classrooms.

There's a little of everything sold in the Russian Market, from stone Buddha statues to ivory teapots to bottles of essential oils.

The most beautiful time of day in the hot, chaotic capital of Cambodia is just after 7 a.m. Phnom Penh rewards the early riser with the last smoky remnants of incense, placed in spirit altars by mothers just before sunrise. It wafts along side streets in half-stride, as restaurant owners sweep away the night's dust and trash and tuk-tuk drivers lounge in their vehicles.

The best way to see it is by bicycle, weaving in and out of the tumultuous traffic. It's a head rush.

By 9 a.m., the city is in full motion: See orange-robed monks sitting side-saddle on motos, tuk-tuks swerving around women pushing rattling coffee carts, children pedaling bikes in school uniforms and mothers supporting toddlers between their knees as they moto to the markets.

While the Khmer language is one of the most difficult for English-speakers to learn, many residents speak some English. And with temperatures that reach as high as 108 degrees during hot season, early morning, I learned on my trip earlier this month, is the best time for sight-seeing in the slowly-modernizing city of a million and a half. Here are my top picks for visiting the city I fell in love with.

Phnom Penh, "Hill City," takes its name from this Buddhist temple sitting above the rest of the city. For just $1 for foreigners, wander the park-like grounds. The only real hill in the city, the view from the top is panoramic-worthy.

Remember to take off your shoes before entering the temple itself. Inside the temple, stand in the back of the semi-dark room to observe intricate painted ceilings, musicians playing and practitioners praying to an altar covered with Buddhas and flowers. Nonflash photography is allowed.

The bright and architecturally stunning Royal Palace was built in the 1870s in the Khmer-French style. The King of Cambodia, Norodom Sihamoni, lives with other members of the royal family on the extensive grounds.

Visitors can tour some buildings, including the Throne Hall, the Napoleon Pavilion (built for the wife of Napoleon III) and the Hor Samran Phirun, where the kings used to wait before mounting their elephants.

Wander through a walled walkway to see the Silver Pagoda, the temple used for the royal family. The proper name is "The Temple of the Emerald Buddha" — for the prize Buddha in the over 2,000-piece collection. It is nicknamed the Silver Pagoda for the solid silver flooring. Also on the pagoda compound are intricate stupas, the final resting places of several kings.

Admission is $6 per person. Pay $10 extra per group for a guide — it's worth it. The guides, dressed in the Khmer lucky color of the day, share fun facts (such as, if the king is at the palace, a flag next to the Throne Hall will be flying) and history on the buildings (such as the stupa former King Sihanouk built for his daughter, who died at age 4).

Then, walk across the street along the two rivers of Phnom Penh: Mekong and Tonlé Sap. There's a night market up the road, which opens about 6 p.m. Go to look at the strange foods and spectacle.

Eerie and solemn, this was once a school turned prison camp during one of the darkest times in Cambodian history — the Khmer Rouge. During the communist takeover, lasting only four years, as many as half of the population was killed — the majority in the educated class, like teachers, engineers and doctors. Many, believed to be state enemies, were taken to Tuol Sleng, where they were forced to give "confessions" and killed.

This place is not for the faint of heart. As many as 17,000 prisoners were held and tortured in these open-air rooms. Only seven survived. The ordinariness of the surroundings (children play and tuk-tuk drivers barter in the neighborhood just outside the walls) is startling.

But the walls also tell the stories of people who survived in the midst of hate and political greed — stories well worth hearing. Admission is $2, but pay an extra $6 for the excellent audio tour, which tells the story of before, during and after the Khmer Rouge. It also warns the listener of particularly graphic exhibits, with the option to skip.

Each neighborhood has its own wat (temple) and open-air market; this market got its name from the large number of Russian expats who visited in the '70s. Wander the covered stalls to find paintings, wood carvings, jewelry, pottery, food — even car and moto parts! Get your name, or the word hope or peace, engraved in silver in Khmer for about $20.

Another attraction of the market is having a traditional skirt made. Visit the fabric section to purchase material from Cambodia, Laos or Thailand, then take it to the sewing section, where a seamstress will custom-make a skirt to be picked up in a few days.

Just outside the market is a great place to find air-conditioned and Americanized restaurants, if you're feeling overheated or a bit homesick. Joma Bakery and Cafe, a Southeast Asian staple for more than 20 years, has an incredible latte made with coffee from the plantations of Laos. Alma's Mexican Restaurant, a weird find on the other side of the world, is a popular lunch place among foreigners living in the area. (The green salsa is to die for.)

If your cheeks are still flushed, take a short trip to the Japanese-built Aeon Mall, a fun place to walk around and cool off.

Get out of the congestion with a trip to this weaving village just an hour outside of the city. The island doesn't receive many tourists, and is a great way to see rural life. Visit a farm to learn about the life-cycle of the silk worms and interact with women weaving on looms. The sophisticated designs can take as long as three days just to set up — before any weaving takes place.

There's also the cotton co-op, where visitors can learn to harvest and spin cotton. (Yes, I got chastised in Khmer by a grandmotherly lady when I didn't spin the cotton correctly.) Arrange a visit through your guesthouse or travel agent. CamboCruise offers regularly scheduled river tours to the island.

Getting there: You receive a tourist visa once you get to Cambodia. You will need $30 and a passport photo for the visa.

Getting around: Traffic in Phnom Penh is best described as semi-organized pandemonium. Sidewalks, when they exist, are overrun by fruit carts, market places and parked motos. During the day, it's too hot even for the locals to walk.

By tuk-tuk: Cambodian culture is all about relationships. If you have a good experience with a tuk-tuk driver, ask for his cell number and call him the next day. Using the same driver regularly usually means better prices.

By bike or moto: If you're really brave, travel like a local: Rent a moto or bike to get around. Movetocambodia.com recommends either Lucky Lucky! Motorcycle Shop or Vannak Motorcycle Shop. Be sure to bring or buy a helmet, though, because one won't be given to you — and traffic gets crazy!

Stay healthy: When I say drink water, it won't be enough. I was drinking close to a bottle every couple hours and still managed to get heat exhaustion one day. Local grocery stores sell Royal D, an electrolyte powder you add to water.

Dress appropriately: Cambodian culture is much more modest than American, and most women wear skirts. If visiting a temple, the Royal Palace or other monument, wear shirts that reach the elbow, and skirts or shorts that reach the knee. Shoes should be easily slipped off; inside temples, homes and some buildings, locals go barefoot.

Check out photos from readers and community members of local events and more.