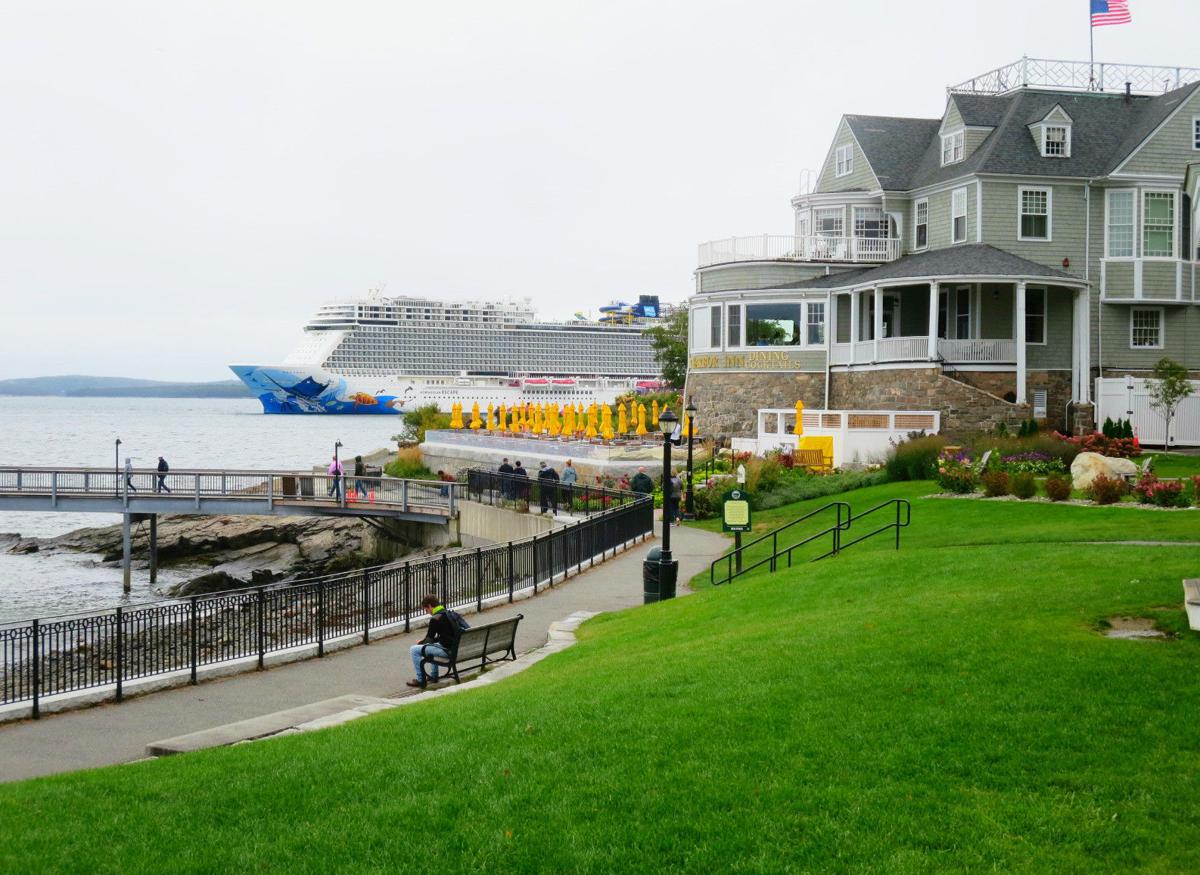 A cruise ship makes its way into Frenchmen Bay past Bar Harbor Inn and the shoreline path. 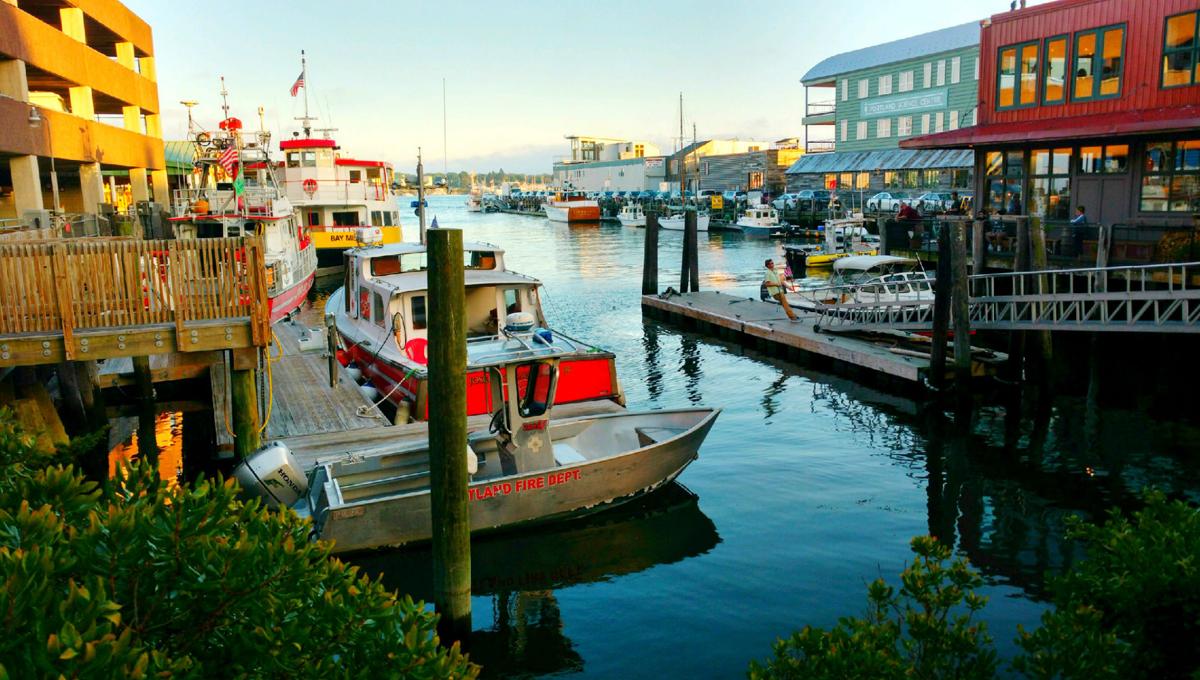 The Portland Waterfront is lined with work and pleasure boats tied at the pier.

“Where you off to?” asked the rental-car clerk as he handed over the keys to the compact SUV.

This was our first trip to Maine, and my wife, Kathy, and I didn’t want to be shuttled across a concrete ribbon in a cruise-controlled induced trance bypassing all that is Maine.

Our trip started with a flight into Portland. With its cobblestone streets and working water-front, the Old Port area is a mixed-use historical district that thrives on locally owned boutiques, well-known regional shops and renowned restaurants.

Our first night in Portland, we strolled through the district toward the waterfront. Passing the myriad work and pleasure boats tied up at the pier gently rocking on the surface, we stepped into a warehouse that sat along a wharf stretched into the harbor. Inside, Scales Restaurant beckoned us with its soaring rafters and floor-to-ceiling windows.

Taking two seats at the spacious bar overlooking bayside, we indulged in a rich, creamy bowl of the most flavorful clam chowder we’d ever had. A lobstah roll with lots of fresh lobster meat seasoned in a house-made dressing served on a fresh-baked, buttery roll completed a delightfully New England-style dinner.

The next morning began at a closet-sized shop, the Holy Donut. Displayed on a giant blackboard was the proclamation all of their doughnuts are made with Maine mashed potatoes. Practicing hard-won self-restraint, we chose a single dark-chocolate and fresh-squeezed lemon doughnut and a coffee each.

With the warm memory of fried sugary potato confections embracing us, we headed north, exiting Interstate 95 as quickly as possible to settle into a more leisurely pace on U.S. Route 1.

We followed a pleasant, often winding, two lanes of dulled-gray macadam that passes from isolated stretches of rich forests and rolling farmland into the main streets of small towns and meandering through whitewashed clapboard fishing villages poised against a vibrant oceanfront.

If you’re going to visit Maine, you dress the part. And if you want to dress the part, visit the mecca of plaid: L.L. Bean located in Freeport.

Freeport, once a dying mill and industrial town, has revived as Maine’s outlet shopping hub. Yankee Magazine named it “Best Shopping Town in New England” with more than 130 factory stores and specialty boutiques.

Making the requisite stop, we explored an enormous building that housed their extensive line of clothing. Other buildings on the campus featured hunting and fishing gear and boat and ski equipment.

By the time we left, I was duly outfitted in a supple green-blue plaid shirt.

As we crossed the Kennebec River, we glimpsed dozens of massive cranes and gantries hanging over the half-finished hulks of ships including the Navy’s latest stealth, guided-missile destroyer.

The city of Bath, home to Bath Iron Works since 1890, is located on the banks of the Kennebec and has built about 5,000 private, commercial and military vessels.

Shortly before midday, driving into the self-proclaimed prettiest town in Maine, Wiscasset, we encountered our first real traffic jam. As we ground to a halt on Route 1, we spied what appeared to be the culprit — Red’s Eats, famous for its lobster rolls.

Red’s is basically an ancient shack with a striped red-and-white awning setting on a postage-stamp sized piece of real estate just as U.S. Route 1 drops down to the Sheepscot River.

The aged visage did not deter the block-and-a half long line of patrons who crossed against traffic seeking out the buttered, grilled New England–style hot-dog bun piled high with chilled lobster meat.

Technically not on Route 1, Boothbay Harbor is worth the detour. There’s no better introduction to coastal Maine.

Boothbay Harbor’s narrow and winding streets are filled with shops and restaurants housed in weathered buildings that pack in as much history as they do souvenirs and seafood.

We explored the aisles of Gimbel & Sons Country Store with everything from knickknacks and toys to sauces and jams. Next door, The Smiling Cow was filled with nautical souvenirs. Afterward, we grabbed a bench near lobster traps stacked all-a-jumble at the ends of the docks, overlooking lobster skiffs bobbing in the harbor and enjoyed a brief respite in the afternoon.

We made several stops along the way, as Kathy is always on the hunt for regional brands of potato chips and flavors.

Just as hunger finally was overcoming us, we discovered McLaughlin’s Lobster Shack near Lincolnville. Delightfully old school, with hanging fishnets and gurgling tanks of the day’s catch. We ordered a shrimp dinner with coleslaw and fries and took our bounty down to the waterfront, grabbing one of the umbrella-covered picnic tables.

Driving Route 1 is not a straight line proposition. As we rounded a curve in a very rural area near Bucksport, seemingly popping-up out of nowhere, we spied an awe-inducing sight.

The Penobscot Narrows Bridge, with its remarkable web of steel strands, spans 2,120 feet and connects Verona Island and Prospect, Maine.

The most spectacular feature of the bridge is the observatory at the top of the west tower. Entering an elevator at the bottom of the tower, we rose to the 400-foot level in a minute, then took two flights of stairs to the 437-foot level.

We were greeted with beautiful 360-degree views of the river and bay below, the nearby village of Bucksport.

After 175 engaging miles, and with the sun setting, we arrived at Mount Desert Island, home to Bar Harbor and Acadia National Park.

We were lucky enough to score a room at the historic Bar Harbor Inn, situated on the shores of Frenchman Bay. A beautiful way to start your visit to Bar Harbor is to wake up early in the morning and take a slow stroll along the 1½-mile Shore Path. This lovely trail starts at the town pier and wraps around the eastern shore of the island.

We explored some of the rock formations along the shoreline and enjoyed sweeping views of the islands and the cruise ships slowly making their way into the harbor. Along the way we passed several magnificent mansions locally known as cottages.

Just up the road from the center of town, Acadia is a wonderful mix of water, coastline and mountains, capped with more than 120 miles of hiking trails and 45 miles of bikeable carriage trails.

One of the more intense hikes is Precipice Trail. Ignoring my own inner warnings, I chose to tackle the menacing climb, and my more prudent wife decided to explore Bar Harbor’s many shops.

The Precipice is endowed with some very narrow ledges, out-sized boulders, switchbacks and culminates with a vertical climb over rusting steel handholds 1,000 feet to the top. It was incredibly exhilarating, although I was constantly battling the distraction of the stunning views along the way.

If you’re looking for something a little more relaxing as Kathy was, then the trail to Jordan Pond is right for you. The next day, we made our way through the quiet woodlands down to the idyllic pond. We paused to observe a deer who seemed just as curious of us as we were of it.

The water itself is crystal clear and calm, surrounded by vibrant mountains in all directions, and provides one of the most serene places in all of Acadia.

After hiking through the park, we had worked up quite an appetite. Seeking an alternative to the ocean’s bounty, Atlantic Brewery and their barbecue restaurant, Mainely Meat, fit the bill. Mainely Meat is a rough-hewn barbecue shack that happens to be located next to Atlantic Brewing Company, one of the state’s oldest craft brewers.

A platter offering of four deliciously smoked meats, along with slaw, beans and cornbread paired with one (or two) of their excellent brown ales made for a perfect repast.

If only everyday ended that way.

We loved wandering Route 1 and Maine’s Atlantic Coast. We relaxed, breathed the refreshing salt air and savored its breathtaking scenery. It’s worth the drive to explore this spectacular down east coastal wonder.

It’s roughly a 2-and-a-half-hour flight from Chicago into Portland’s International Jetport. The drive from Portland to Bar Harbor can be approximately 3 and a half hours, but take your time, make a few stops and make it an adventure.