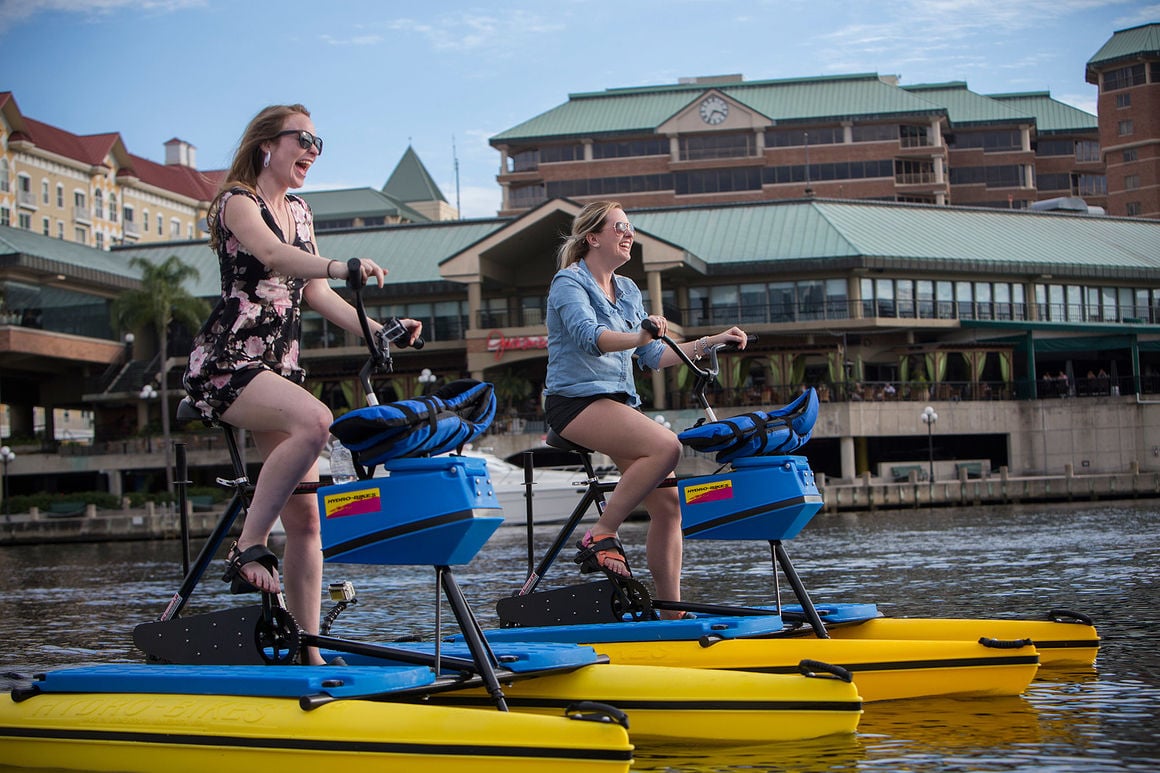 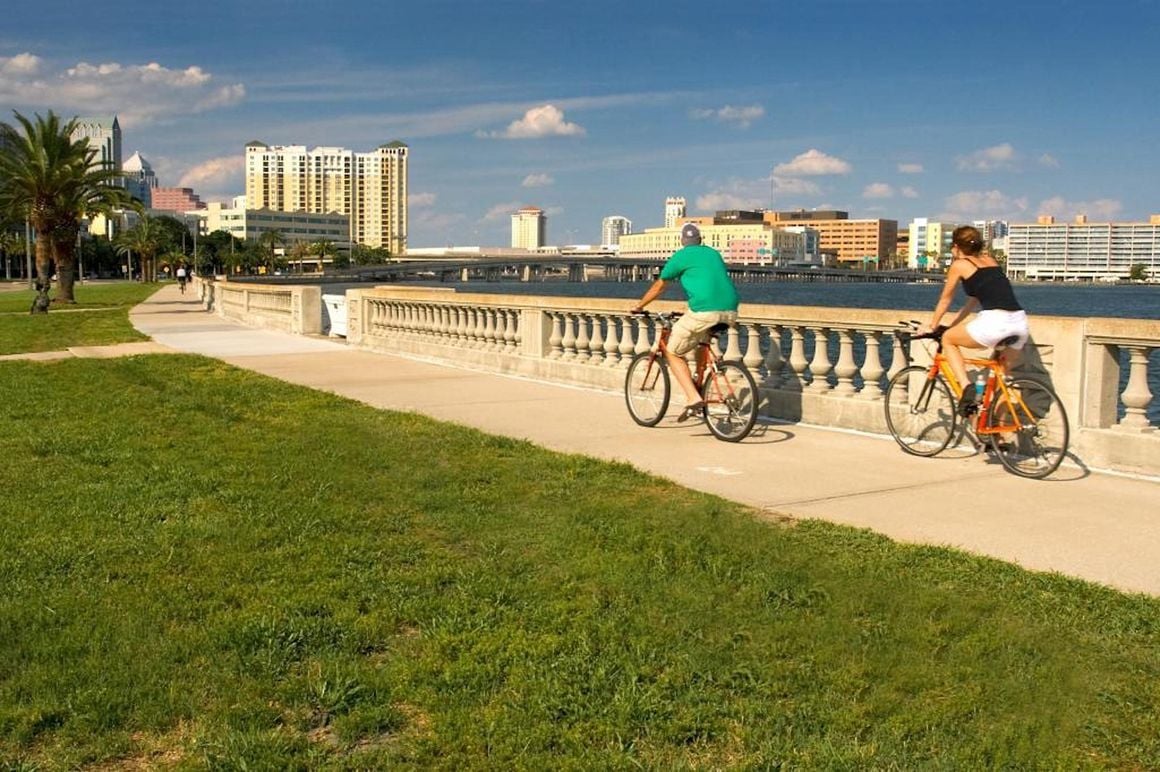 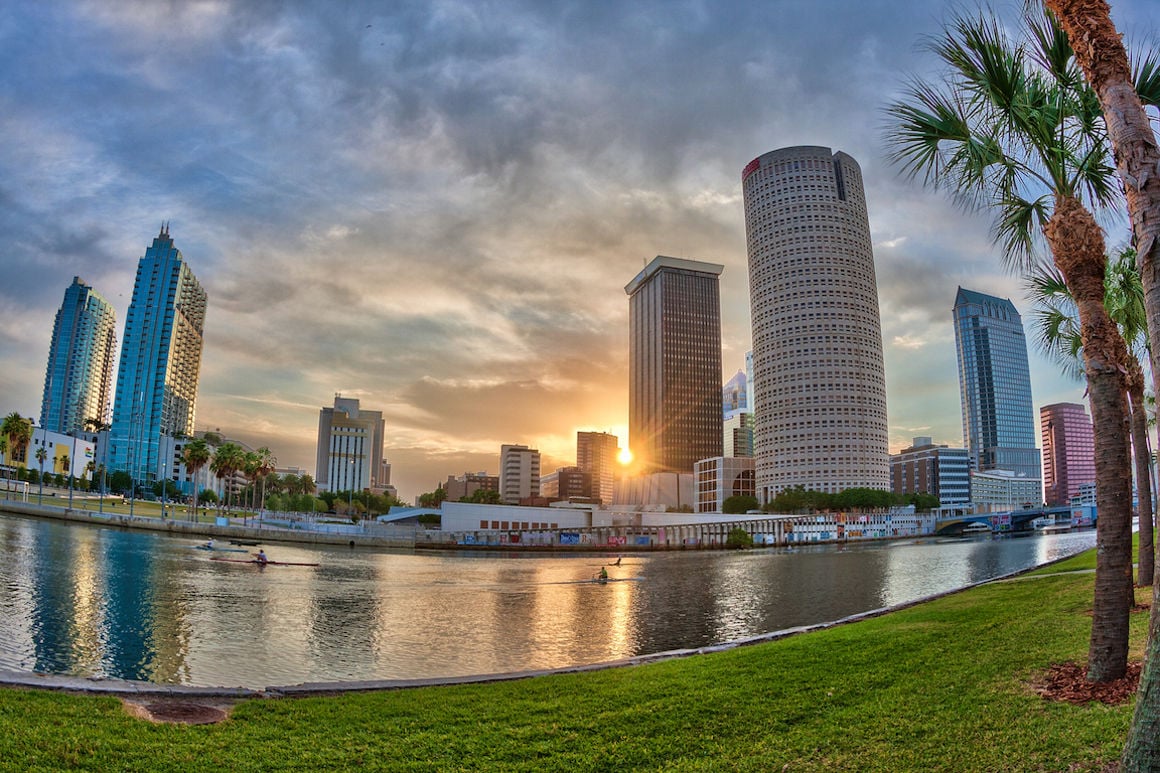 Crews work out before a backdrop of the Tampa Bay skyline.

Crews work out before a backdrop of the Tampa Bay skyline.

At home, a dry day is a good day for a cyclist. Add sunshine to the mix, and any outing elevates itself. Add scenery the likes of sparkling bays, dolphins, manatees and valet parking for bikes? It's gotta be a two-wheeler vacation in Tampa Bay, Fla.

For year-round sunshine, 100-plus miles of bike lanes and flat-to-gently sloping terrain, think Tampa Bay. There are bike lanes on Cass Street and the Riverwalk, bike routes that lead to Ybor City, even pedal bikes that float on the warm waters. Family vacation? Helmets are required for children -- pack or rent them along with bikes. As they say in Tampa Bay, which consistently wins praise from cyclist organizations, be prepared to "Put your mettle to the pedal." To see the sights while cycling, remember to take it slow and watch out for pedestrians!

The Tampa Bay bureau says the Riverwalk is as popular with cyclists as it is for walkers. It can get crowded, so take it slow and allow yourself time to see and enjoy the surroundings. The Riverwalk runs for 2.4 miles along the Hillsborough River and Garrison Channel. It connects downtown's favorite attractions; The Florida Aquarium, Tampa Bay History Center and the downtown waterfront to Curtis Hixon Waterfront Park to the Straz Center for the Performing Arts, Water Works Park and Ulele restaurant. Ulele boasts a menu of native-inspired foods and spirits.

Coast Bike Share has rental stations spread all along the Riverwalk, with the largest outlets outside the Glazer Children's Museum and Tampa Convention Center. There are bike repair stations at the waterfront and just north of the Straz Center, too.

Downtown's original waterfront pedestrian course stretches for 5 miles. Bayshore ranks as the world's longest unbroken sidewalk. The path is very popular with walkers, joggers and other cyclists. Insider tip: There is a single-track path worn into the grass just to the inside of the concrete path. And a striped bike lane on the northbound side of the road.

The curving path starts at Platt Street (the bridge links Bayshore with the Riverwalk) and runs to Gandy Boulevard, passing some of Tampa Bay's most dramatic scenery and most impressive real estate. Insider tip 2: Keep one eye on the water side of the walk for dolphins, diving pelicans and maybe the occasional manatee.

Bayshore provides easy access to upscale South Tampa neighborhoods, such as Hyde Park and high-end shopping at Hyde Park Village, as well as Palma Ceia (at Bay to Bay) and Datz restaurant — a deli and gastropub. The boulevard's median is an unofficial open-air art gallery inviting passers-by to stop and visit with the artists.

Ybor city is a draw in itself in Tampa Bay. One of only three National Historic Landmark Districts in the state, its red brick buildings, wrought iron balconies and narrow cobblestone streets provide an old-world charm and antithesis to the ultra modern city.

Using a two-wheeler, one cycling route to Ybor City connects to the Tampa Riverwalk at Brorein Avenue in the shadow of the elevated Selmon Expressway. Tampa Bay's Downtown's bike network makes use of existing streets, sidewalks and parking lots to wend its way through town. Locals say it's a little more complicated than the Riverwalk or Bayshore, but it is well marked. At the end of the path, take a selfie using a view of An American Journey, a sprawling mural depicting the immigrant history of Ybor City. Maybe park the bike and enjoy a tasting of craft beer at Coppertail Brewing Co., among Tampa Bay's best craft breweries. The brewery offer tours of the production area; tours usually last 45 minutes.

People For Bikes specifically praised the Cass Street bike corridor, which runs through the north side of downtown toward Ybor City. The corridor is a sheltered two-lane course that keeps bikes separated from car traffic while giving riders the same access to the downtown's best assets.

Off the beaten bike path

Visitors also can pedal their way around Tampa Bay way off the beaten bike path — on the water. Located on the waterfront by the Tampa Convention Center, Tampa Bay Water Bikes rents pedal-powered, pontooned vehicles that give you a chance to see downtown from a whole new angle. The crafts function just like a bike but have paddles where the front tire and back tire ought to be. Take one for a spin and bring the kids; if the dog came along on vacation, it will be welcome, too.

Visit Tampa Bay has the skinny about getting around, be it on foot, by guide or on a bike. Visittampabay.com.

City Bike Tampa aims to provide happiness on two wheels. Open 7 days per week. Reservations preferred for rentals. In town on a Monday? Sign up for a group ride on Monday evenings. Citybiketampa.com.

Coast Bike Share is designed for fun rides in and around town, usually between 1 to 3 miles. Comes with a basket and is GPS enabled. Coastbikeshare.com.