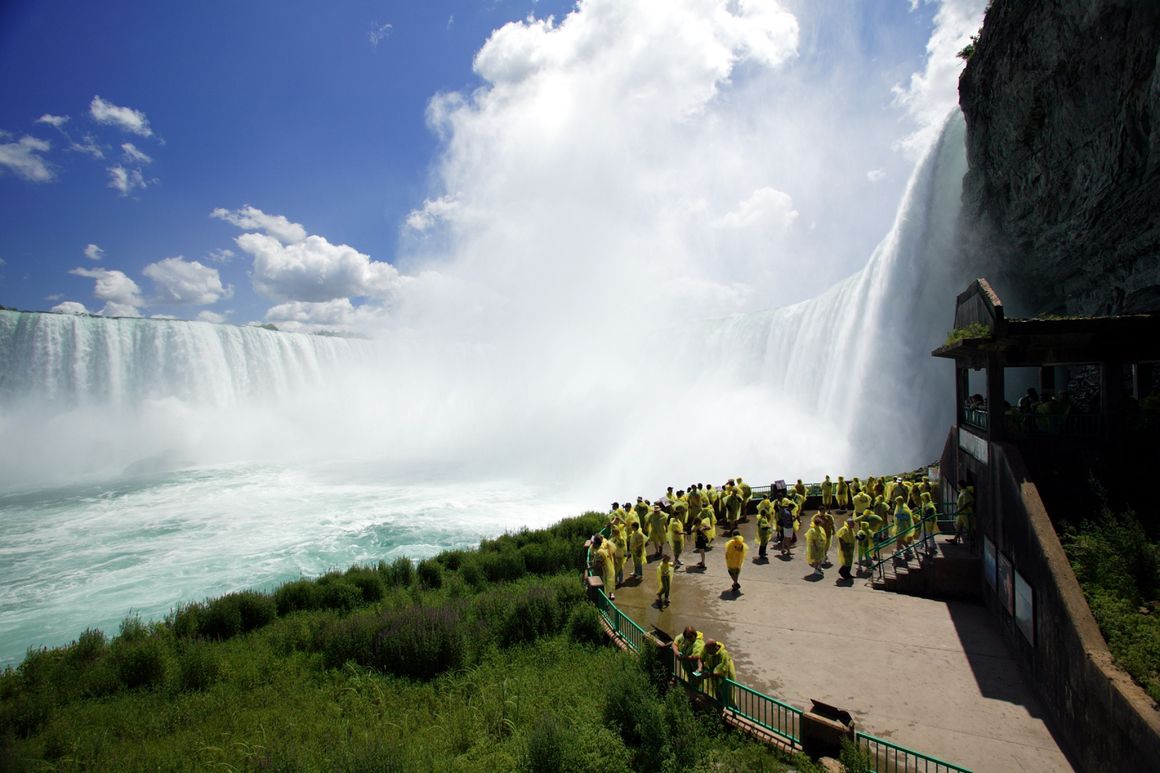 Snap on a raincoat before venturing on the Journey Behind the Falls tour that includes stops on observation decks. Niagara Falls boasts three mega-powerful waterfalls, the American Falls and Bridal Falls and the Canadian Falls, all fed by the Niagara River. 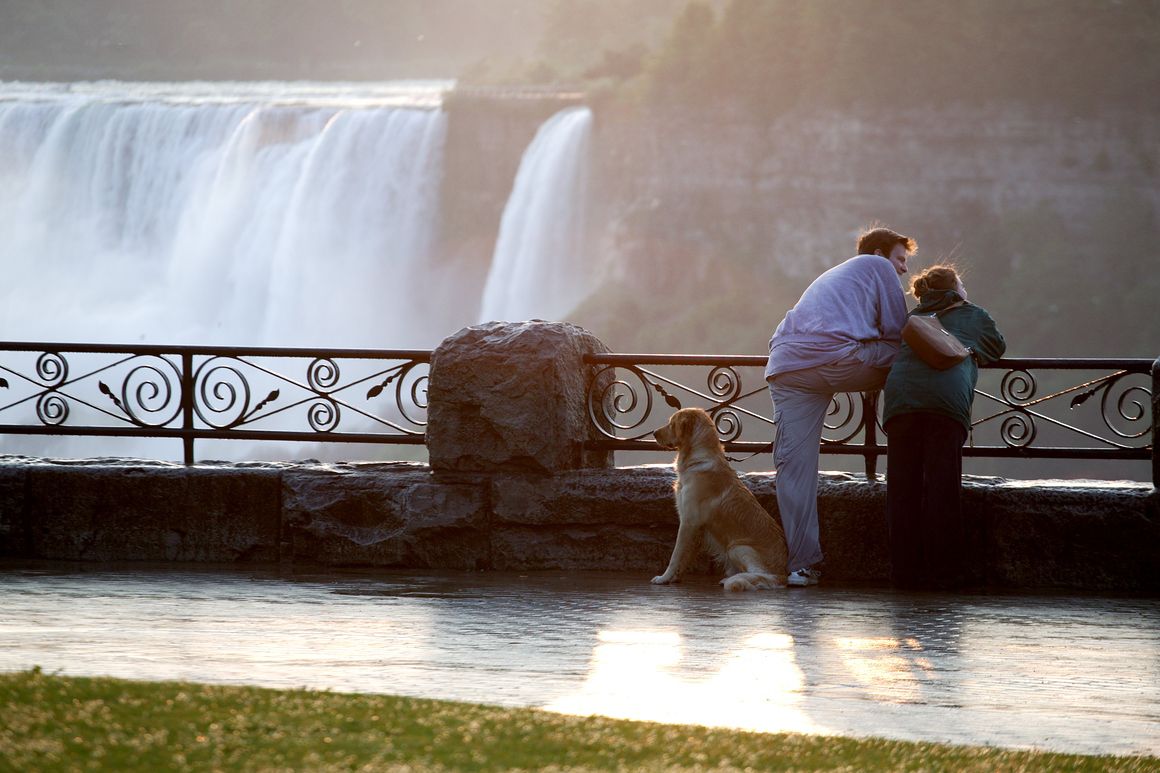 At Niagara Falls, even the family dog is impressed by the power of the American Falls.

Snap on a raincoat before venturing on the Journey Behind the Falls tour that includes stops on observation decks. Niagara Falls boasts three mega-powerful waterfalls, the American Falls and Bridal Falls and the Canadian Falls, all fed by the Niagara River.

At Niagara Falls, even the family dog is impressed by the power of the American Falls.

Visitors hear the falls long before they see them. Each second, 74,000 gallons of water rush at 40 mph toward the brink and thunder over Niagara Falls.

The water of the Niagara is not only noisy, it is beautiful. On a sunny day, the current roils to reveal forces of crystal, Caribbean-blue water. On a cloudy day, the palette darkens to a deeper blue, similar to a summer sky at magic hour. It's the limestone that keeps the water clear; the limestone escarpment that follows the Niagara starts way back along the central section of the Mississippi River. We see it above ground in the bluffs and caves that line Midwestern waterways. Reportedly it goes underground to rise again out east. Or so I have been told. There's plenty of folklore and facts about the great falls found on the border between Ontario, Canada, and New York State.

The volume of spray from the unending cascades over Bridal Falls and the American Falls on the United States side and Horseshoe Falls in Canada starts to dissipate as it reaches the shoreline. More gentle than a splash of water, but just as wet, the spray spins off the falls and hangs in the air. It is impossible not to walk into it. Heads up: It is cold.

For nearly a century, visitors got close to the falls by walking along trails and stopping at lookout points. Once railroad expansion opened the area, it became a honeymoon destination and still is called the Honeymoon Capital of the World. With a laundry list of added attractions, the area has evolved to provide vacations or respites for all ages.

Next to the water: Today's visitors still take the White Water Walk along the widest stretch of the Niagara. It provides a close-up view of trillions of gallons of fresh water being forced into a narrow before releasing with a roar at the Falls.

Over the water: For those who want to go for it, they can see the Falls from above via Niagara Helicopters Flightseeing Tours. More traditionally, the view from 775 feet over a meal at Skylon Tower is legendary for both the Falls and the menu. The Tower celebrated its 50th anniversary last year.

Behind the water: The Journey Behind the Falls excursion remains my favorite — I still have my disposable, biodegradable rain poncho. Tours start 150 feet below the surface. The elevator shafts were carved through bedrock. The tunnels lead toward two portals and to one-third of the way behind the massive wall of water. There are two observation decks located at the foot of the Falls, and both provide post-worthy photos of the experience. Heads up: You will need a waterproof smartphone or camera.

On the water: Cruises take visitors near the heart of the Falls, where the mist might feel like more of a splash. Evening cruises are big fun all year long. The Fireworks cruise is quite special. The view of the Falls backlit by a fireworks display and the lights of the skyline is spectacular.

On land: Check out the WEGO, a hop-on, hop-off bus that connects tourist attractions and hotels within the city of Niagara Falls, Ontario.

More than 14 million people visit Niagara Falls every year. It is very much a place that you have to see to believe. And return to, just in case you missed something.

Niagara Parks Commission: For the skinny on what's going on at and around Niagara Falls, visit the website of the commission that has been protecting them since the 1870s, the Niagara Parks commission, at niagaraparks.com.

Getting there: For Canada, passports are required. You might not need a car in Niagara on Lake, Ontario, Canada, but driving is still an economical and fun road trip, especially to see the falls. Hints: Have passports open to photo ID page, surround for inspection at the booth, answer questions as asked and be on your way. Ditto for the return in the United States. In the United States, drive on into the park.

Exchange rate: The exchange rate for Canada strongly favors the U.S. dollar, making a visit to Canada an even better idea. Especially to Niagara Falls, Ontario. Heads up: When using cash, change will be given in Canadian currency.

• Barrel attempts: Since 1901, 15 “daredevils” have challenged Horseshoe Falls in a barrel. 25 percent perished. The rock talus at the base of the American Falls helps to keep daredevils away from the U.S. side.

• The beginning: The Niagara Falls Gorge was carved 12,000 years ago.

• The falls: The free-flowing waters of the Niagara River Gorge feed the three falls that entice visitors from all over the planet: Bridal Veil Falls and the American Falls on the U.S. side of the border and Horseshoe Falls in Ontario, Canada.

• The drop: Water from the Falls tumbles 185 feet from a point that is 18 stories high.

• The visitors: Each year, more than 14 million people visit, stay and play at Niagara Falls.