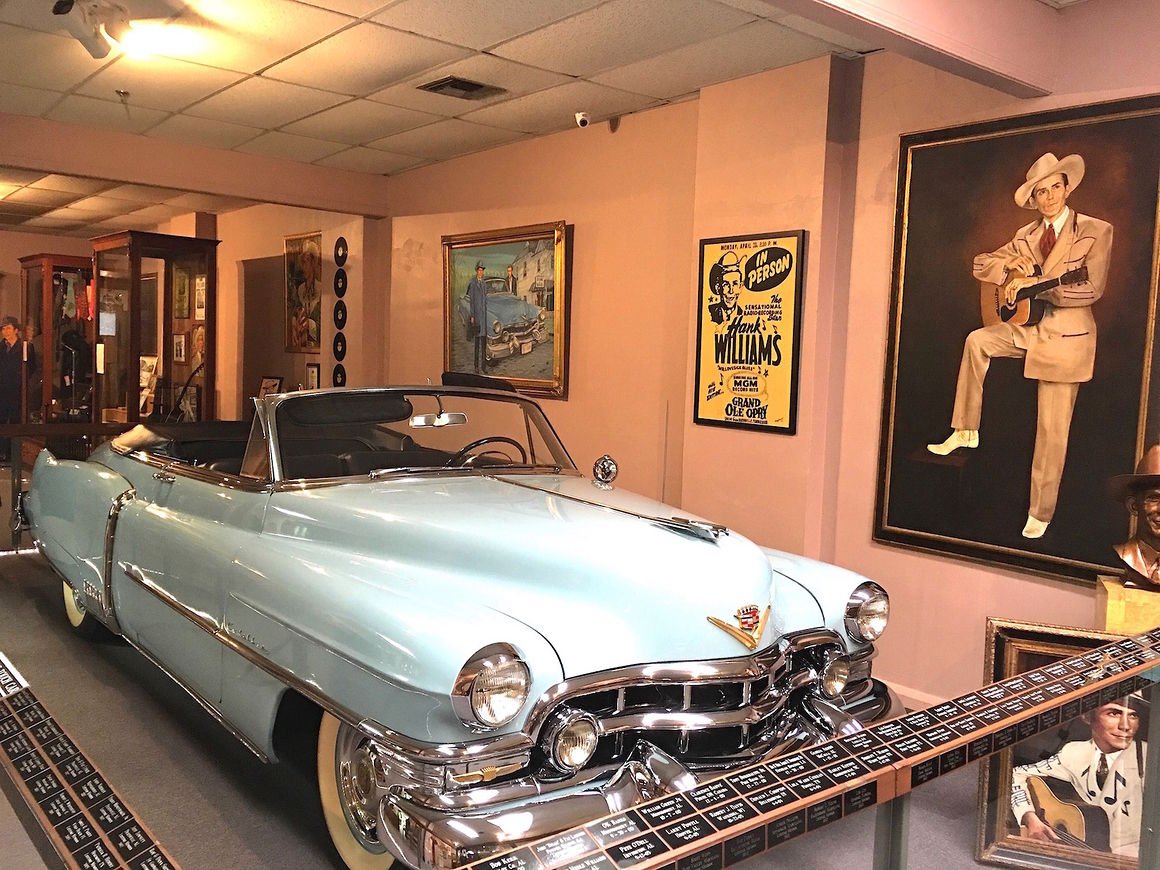 The Cadillac in which Hank Williams was riding when he died is displayed at the museum. 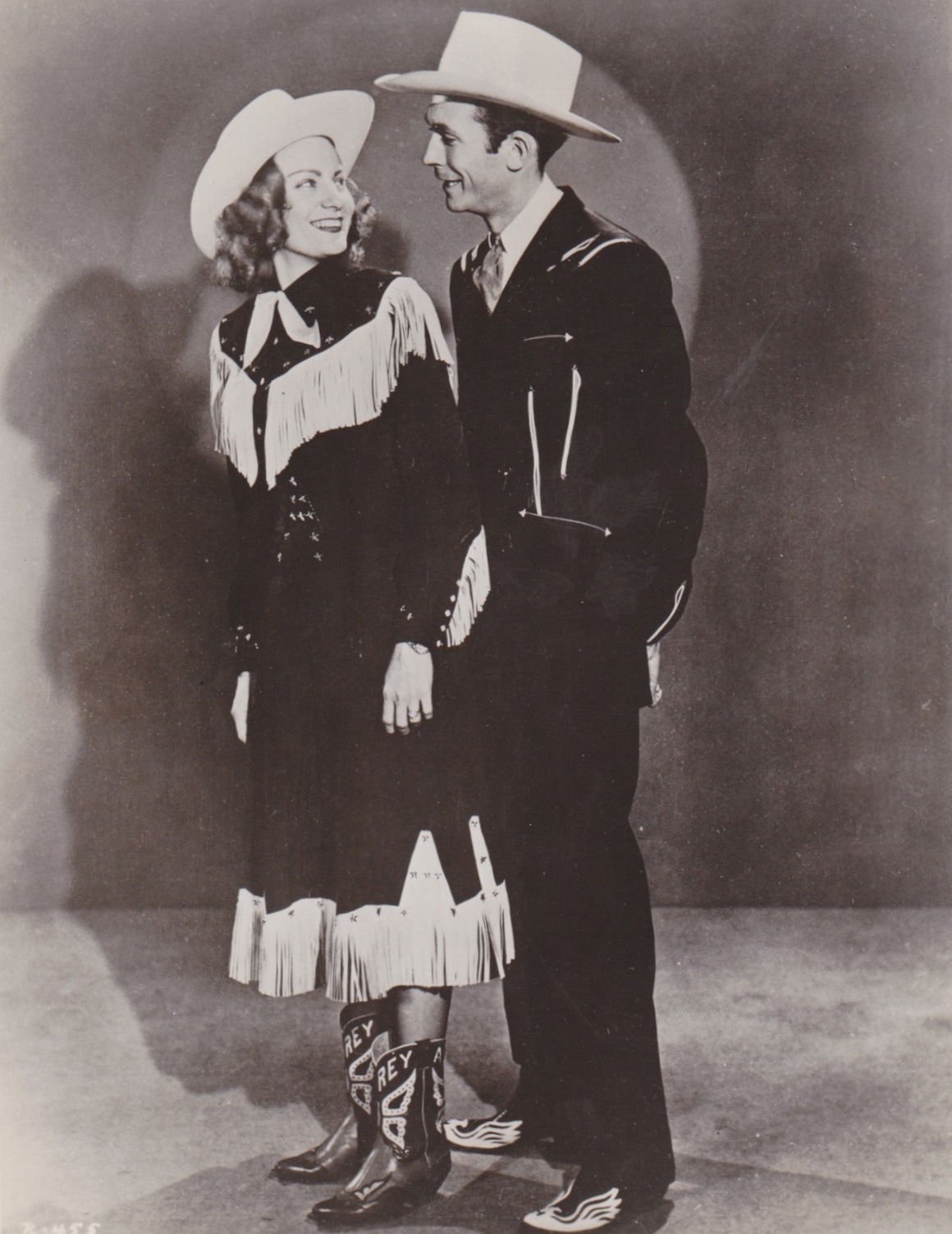 The country music legends Hank and Audrey Williams performed together in the early 20th century. Hank Williams is honored at the museum that bears his name in Montgomery, Alabama. 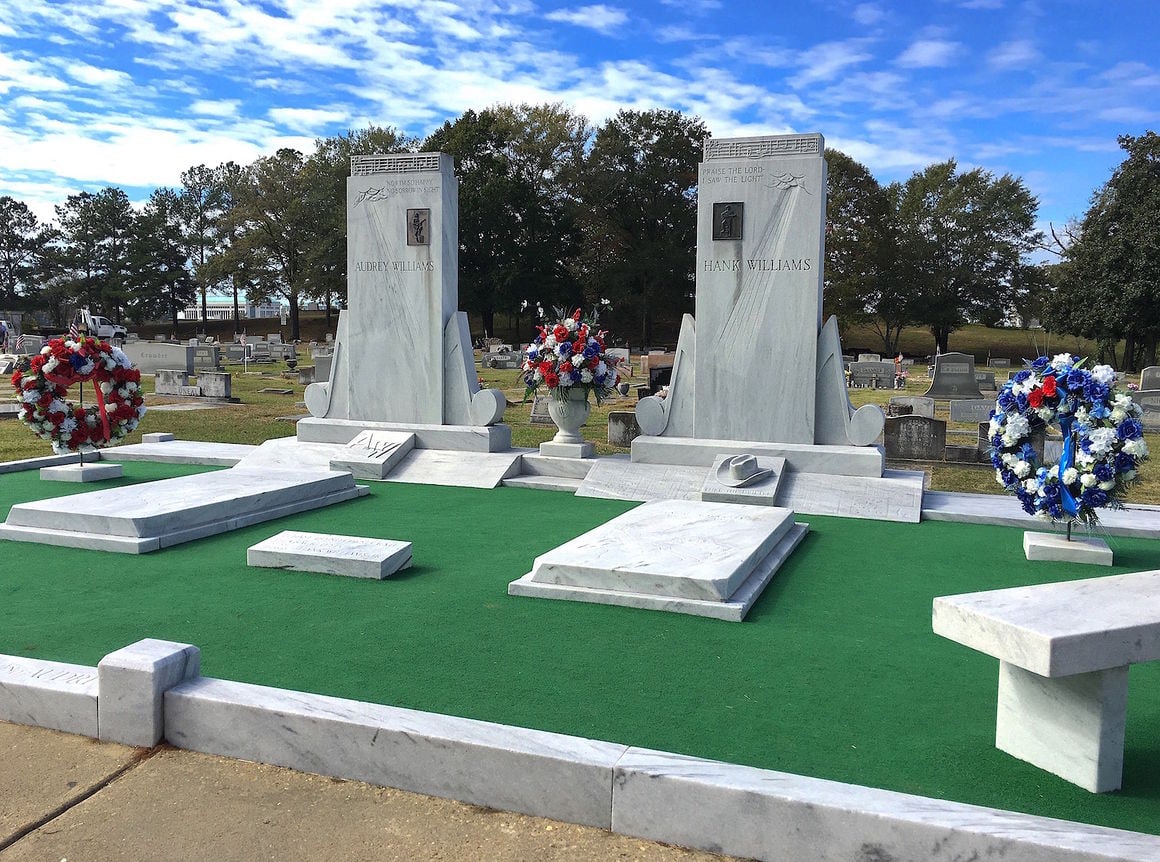 Hank and Audrey Williams are buried in Oakland Annex Cemetery in Montgomery. 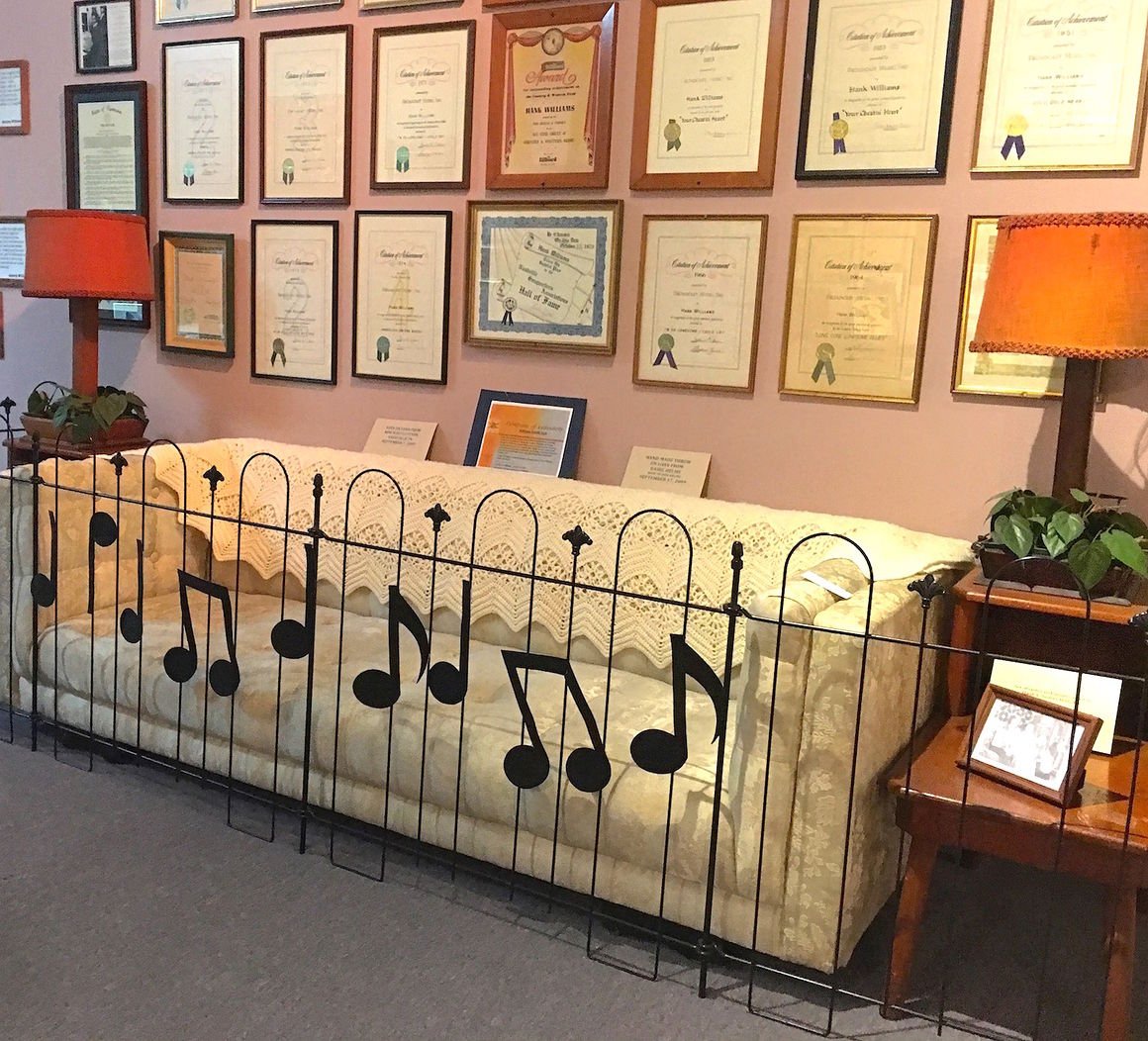 The Williams' sofa and some of Hank's awards are part of a family exhibit.

The Cadillac in which Hank Williams was riding when he died is displayed at the museum.

The country music legends Hank and Audrey Williams performed together in the early 20th century. Hank Williams is honored at the museum that bears his name in Montgomery, Alabama.

Hank and Audrey Williams are buried in Oakland Annex Cemetery in Montgomery.

The Williams' sofa and some of Hank's awards are part of a family exhibit.

Slumped in the back seat of a baby blue Cadillac speeding through a dark night, Hank Williams died New Year's Day, 1953.

The country music legend was on his way to a concert in Canton, Ohio. Somewhere in West Virginia, Williams' young driver became worried about the lifeless body draped in a navy-blue overcoat. By then, it was too late.

Carried into an emergency room, Williams was pronounced dead on Jan. 1, 1953. His heart had given out.

About 28,000 fans attended the Jan. 4, 1953, funeral in Montgomery, Ala. Williams was laid to rest in one of his white stage suits, a small white Bible in his hands. He is buried in nearby Oakland Annex Cemetery, where a public memorial service is held every New Year's Day.

More than 60 years later, you can see the 1952 Caddy that carried Williams to his death and the blue serge suit he wore on that cold night. The museum was the creation of a man named Cecil Jackson who had attended Williams' funeral as a teen and swore to someday create a museum for "the greatest singer and songwriter of all time."

"This was my Dad's dream," said Beth Petty, director of the museum her father founded. Cecil Jackson died in 2010, but his daughter has vowed to continue the attraction that draws people from around the world.

The doors of the Hank Williams Museum opened Feb. 8, 1999, in Montgomery, where Williams had spent the better part of his life.

Born on a farm in Mount Olive, Ala., on Sept. 17, 1923, Hiriam (as spelled on his birth certificate) "Hank" Williams was the second child of Lon and Lillie Williams. His father was a World War I veteran who was hospitalized for war stress most of the boy's early life. A small child afflicted with spina bifida, Williams seemed drawn to music from the beginning, singing in church choirs as a child.

One of his best friends was Rufus Payne, a black street musician known as "Tee-Tot." Williams later credited Payne with giving him "all the music training I ever had."

Williams and his mother moved to Montgomery in 1937. He was only 14 when he entered an amateur talent contest at The Empire Theater and won $15 for first place for singing his original "WPA Blues." At age 16, Williams quit school and turned to his music career with a vengeance. A regular on local radio shows, he played at almost every high school auditorium, honky tonk and fair in the area, backed by his band, the Drifting Cowboys.

In 1944, Williams married Audrey Mae Sheppard, an Alabama country girl with a 2-year-old daughter from a previous marriage. Learning to play stand-up bass, Audrey joined the band and made some recordings herself. But it was Hank Williams the fans clamored for.

In all, Williams recorded 225 songs and wrote 128 of them. Under the pseudonym "Luke the Drifter," he tried to work out his demons in gospel themes and a series of recitations. On a warm night in June 1949, Williams reached the pinnacle – his debut at Ryman Auditorium for the Grand Ole Opry. Less than four years later he would be gone.

By mid-1952, his life was on the skids. Audrey filed for divorce and took their son, Randall Hank Williams Jr. Wracked with back pain, Williams tried to ease his misery with whiskey and morphine, prescribed and often administered by doctors.

During the years, Jackson collected whatever Hank Williams memorabilia he could find, planning to someday open his museum. After retiring, Jackson figured the time had come to share all he owned, plus a wealth of things that had been donated or loaned.

The center of attention, of course, is the sparkling Cadillac where Hank Williams breathed his last breath. The restored automobile is on loan from Hank Williams Jr. The piano that was in Hank and Audrey's Williams' home also is showcased, as is other family furniture plus the suits and boots worn by Williams and the hand-painted neckties he favored.

There's the saddle Williams used to ride his horse Hi Life and the old fiddle he played. You can see a partially empty tube of Pepsodent toothpaste and other items the singer had with him on that last ride. A mannequin models the blue, western-style outfit the singer was wearing when he died. Williams had slipped off his white cowboy boots and was wearing slippers for that final trip.

A 1940s jukebox sits in one corner. The museum has a slew of Williams' recordings, ranging from rare and fragile old 78s to the stereo LP albums issued long after he died. Other exhibits showcase people and kinfolk who were close to Williams.

"My Dad always said it was very shocking when Hank died," Perry said. "You never think someone is going to die when they're only 29 … Hank was a genius and that's why people still remember him after all these years."