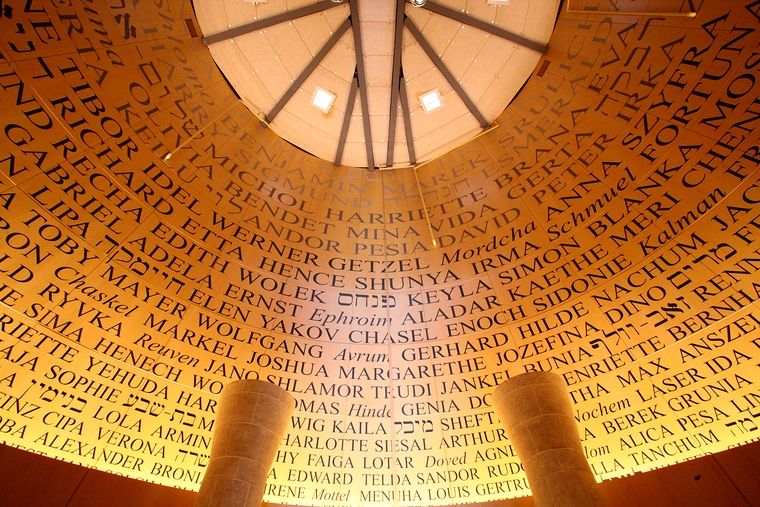 Designed by renowned architect Stanley Tigerman, each section of the Illinois Holocaust Museum and Education Center is thoughtful and symbolic. The names on the ceiling of the Room of Remembrance represent all victims of the Holocaust. 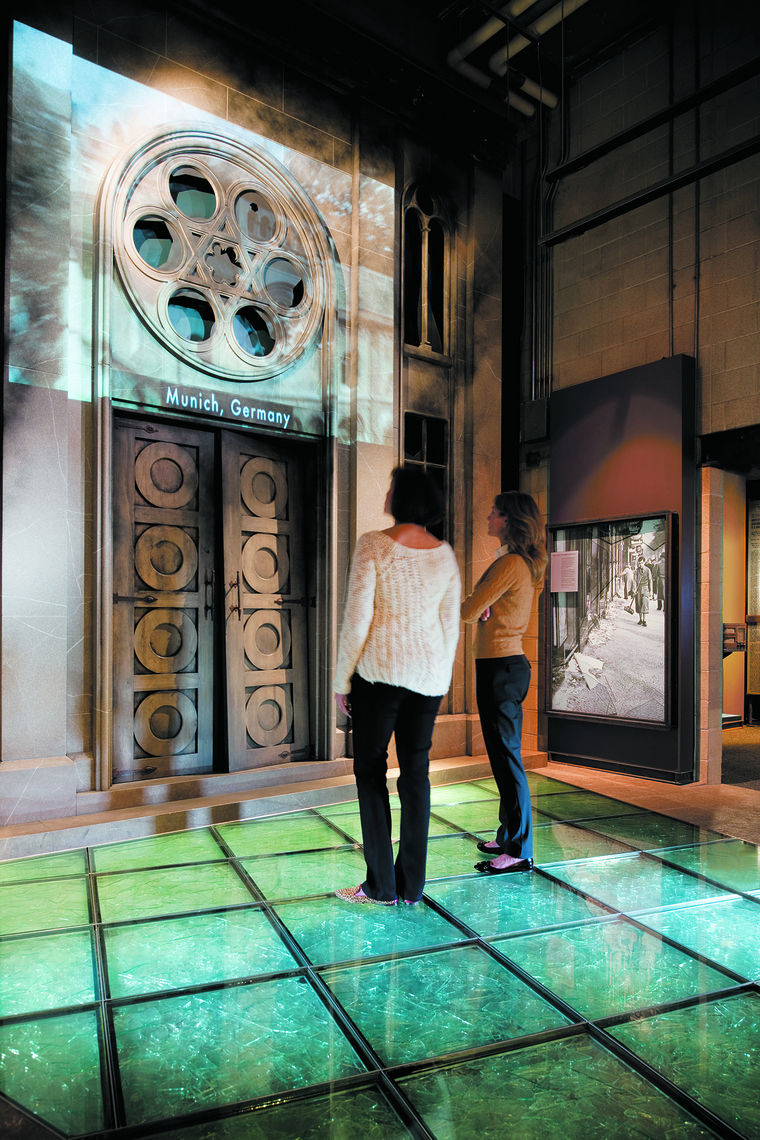 The floor of the Kristallnacht room is made of shattered glass. 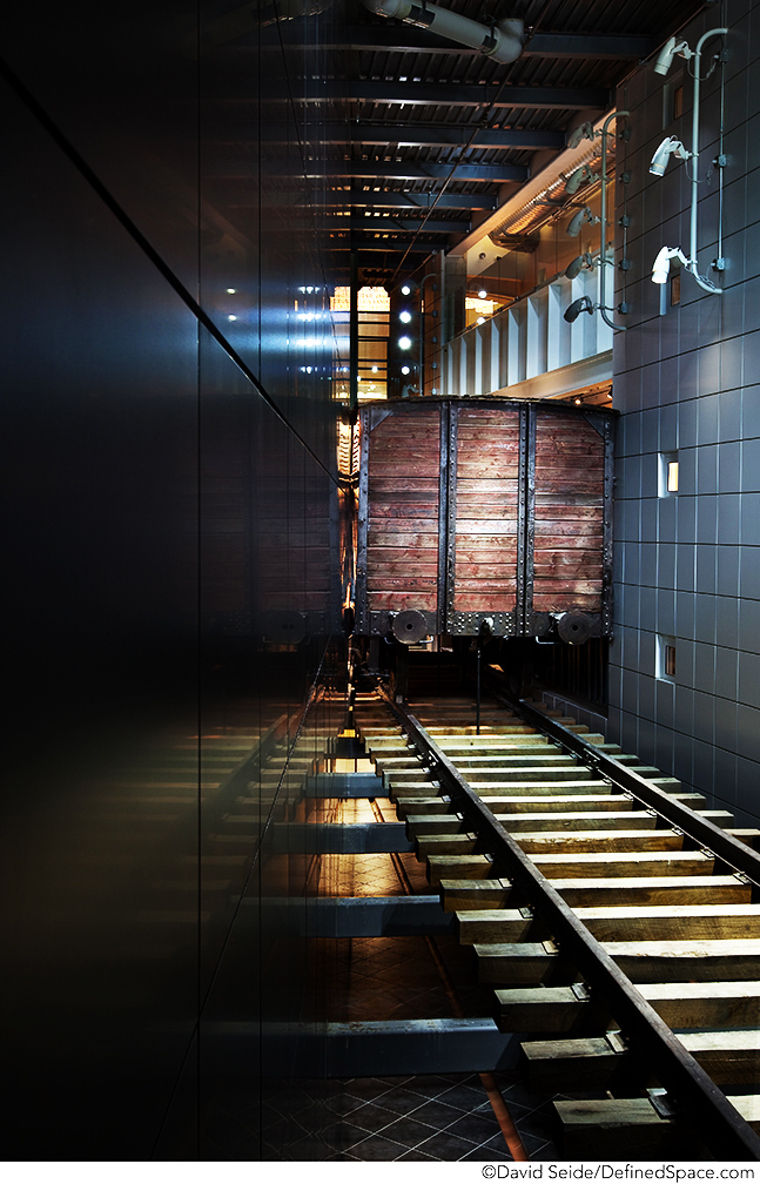 The Illinois Holocaust Museum and Education Center's anchor artifact is an authentic early 20th Century German rail car, similar to the ones used to transport Jews to concentration camps. 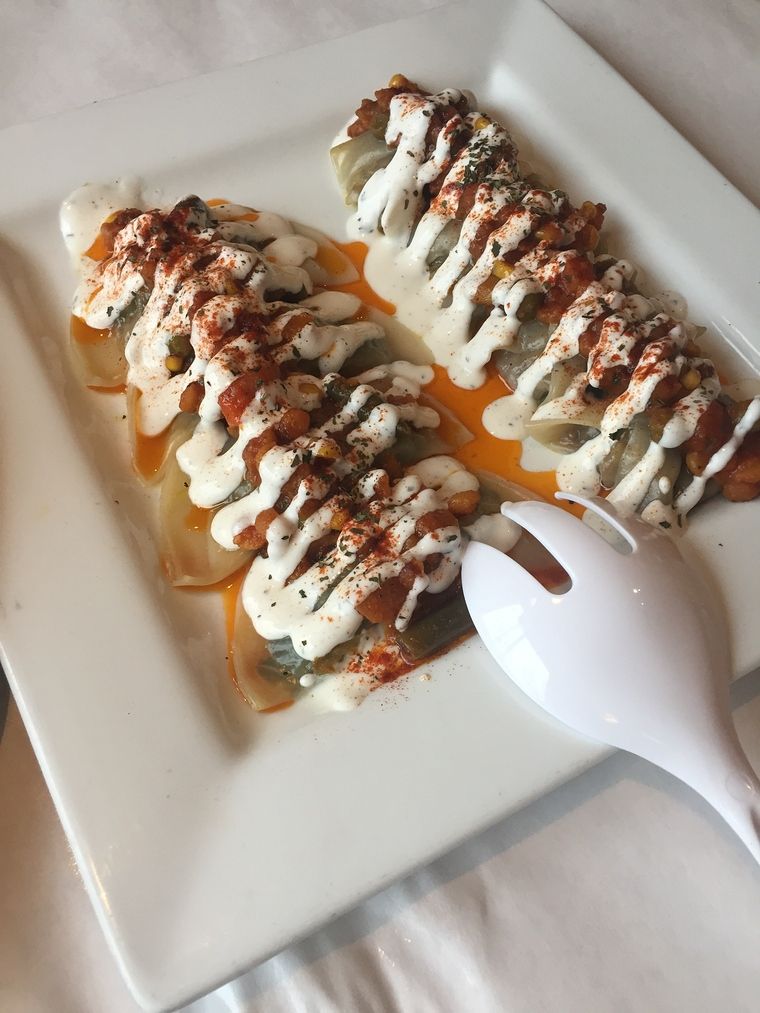 Mantoo and aushak: steamed dumplings filled with scallions and leeks; or spiced ground beef, shredded carrots and onions. Both are topped with a yogurt-mint sauce and tomato-based meat sauce.

Designed by renowned architect Stanley Tigerman, each section of the Illinois Holocaust Museum and Education Center is thoughtful and symbolic. The names on the ceiling of the Room of Remembrance represent all victims of the Holocaust.

The floor of the Kristallnacht room is made of shattered glass.

The Illinois Holocaust Museum and Education Center's anchor artifact is an authentic early 20th Century German rail car, similar to the ones used to transport Jews to concentration camps.

Mantoo and aushak: steamed dumplings filled with scallions and leeks; or spiced ground beef, shredded carrots and onions. Both are topped with a yogurt-mint sauce and tomato-based meat sauce.

EDITOR'S NOTE: Mary Hall is a 23-year-old writer with an adventure-streak. In her new column, Windy City Wander, she'll seek to find hidden gems slightly off the beaten path in and around Chicago.

If a building can have a personality, the Illinois Holocaust Museum and Education Center is pensive.

Housed in a curious industrial building off the highway in Skokie, the 6-year-old museum stands in contrast to the surrounding area. It is the third-largest Holocaust museum in the world, and is owned by a nonprofit started by Skokie-resident Jewish Holocaust survivors.

There's a quiet heaviness as you walk through the entrance, and the busyness of life outside the doors seems somehow paltry. "The mystery of this place is in the details," said Jerry Lidsky, museum docent. "If you tune into this place, it begins to speak to you."

It speaks in thoughtful details: The walls are stark and windowless. Rafters are modeled after the crematoriums; light fixtures after shower heads and gas-chamber fixtures.

There's an authentic box car similar to the ones used to transport victims from camp to camp, located in the center of the museum. Visitors catch glimpses of it around corners and at the end of hallways.

Designed by Jewish architect Stanley Tigerman, the 65,000-square-foot building is an outside-in experience, Lidsky explained. Metal columns near the entrance represent the destruction of the Jewish temple. The Fountain of the Righteous honors families who protected Jews; each name has a connection to a survivor who settled in the Midwest.

Start your tour with a conversation via hologram with Pinchas Gutter, who survived the Warsaw ghetto and five concentration camps. He's still alive.

The test site is the first in the world — it's "natural language" technology preserves Gutter's mannerism while allowing visitors to ask him more than 3,000 questions about his life. The result is a simulation so lifelike I found myself leaning in to hear his answers.

Then wind through the halls of the Karkomi Permanent Exhibition. Where the architecture is stark, the content of the galleries is personal and intimate. Walk along prewar wedding photos and baby clothes, through photographs of shopkeepers on Kristallnacht — the night of Nov. 9, 1938, when German Nazis attacked Jewish persons and property — and planning documents for the Final Solution. It's impossible not to draw connections to modern-day controversies as you glance at newspaper headlines reading "European immigration crisis."

Years are engraved into stone walls and the path begins a slight incline downhill, unnoticed at first, until you're in the Warsaw ghetto. As we stood there, Lidsky pointed on a model to Liechna Street, where five of his aunts died. "It reminds you [genocides are] still going on," he said. "It reminds you to question, 'Is there anything you can do now?'"

With that question ringing in our ears, we begin to walk steeply up an incline, into the box car that's been fixed around every corner.

The car is silent and empty. There's no guide presentation on facts or figures. You no longer can hear the video presentations or the voice of other museum attendees. Instead, in the quiet, you feel the lives of the people you've been hearing about for the last hour. Not in the abstract — actual people who had names and siblings and children. It's chilling, ennobling.

But if the mood through the first half is weighty, the second is light itself. Make your way upstairs, into a hallway of white walls and large windows.

"When you come from darkness into light, it's painful," Lidsky said as our eyes adjusted. "Truth is painful sometimes."

Which is the museum's whole purpose — to remember not just the Jewish Holocaust, but the victims and survivors of all major genocides. "It's an education center, to teach about humanity and destruction," Lidsky said. "And life," he adds after a pause.

Walk through the Legacy of Absence Gallery, where artists from all over the world have donated their works depicting genocides in their own countries. Contemplate in the Hall of Reflection, where lit candles sit in 18 windows. The number 18 represents life in Judaism.

End your tour in the Room of Remembrance, a conical with the names of the Holocaust victims printed up the walls. There's a book that lists the names of the museum founders and their family members who were killed; the page is turned every day.

After the museum, you'll need to decompress, and my favorite way to do that is over a good meal. A short ride will take you into downtown Skokie. You only need to look at the local restaurants on Oakton Street to realize the ethnic diversity of the suburb: Within a block and a half find Thai, Japanese, East African, Portuguese and Jamaican food.

We stopped at Kabul House, an Afghani restaurant that started as a side room in a pizzeria. Now it's a local staple that boasts authentic cuisine "as if prepared from the fingers of any Afghan mother," according to the website.

I've never had an Afghan mother cook for me, but I can say this restaurant is special. Come with a sense of adventure, an empty stomach and a palate ready for unique flavors.

Without much experience in Middle Eastern food, I'd never heard of most of the menu items. But the friendly staff seemed genuinely happy to share their culture, and our waiter, Gerber, ordered his favorites for us.

Go when you have time to eat slowly, and preferably with a group, so you can try many things. Try the dish that made Kabul House a local legend: kabobs of chicken, ground sirloin and lamb, with dill rice and Afghani rice, which has thinly sliced carrots and onion.

Or there's the mantoo and aushak, both steamed dumplings — one filled with scallions and leeks the other with spiced ground beef, shredded carrots and onions. Both are topped with a yogurt-mint and tomato-based meat sauce. For dessert, savor Afghan ice cream, made with rosewater, cardamom and pistachio.

INFO: The "Symbolic by Design" architecture tour of the building is offered several times per month — Feb. 14 and 27 this month. Free docent tours at 2 p.m. every day. Lasts 90 minutes.

With children? Check out the Harvey L. Miller Family Youth Exhibition, designed for those 8-12 and focuses on themes of courage and taking action against bullying and hate speech.

UP NEXT: The "Nazi Olympics" exhibition will open Feb. 21, 80 years after the Games in Berlin.