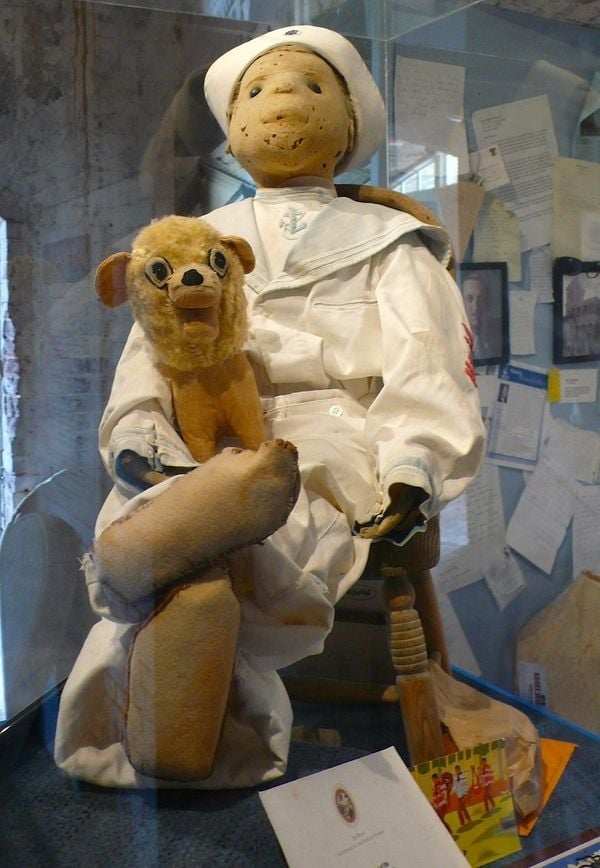 Robert the Doll is kept safely behind a plexiglass case at the Key West museum. 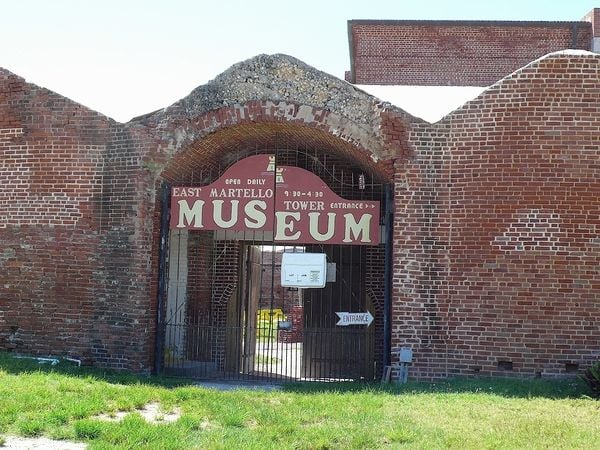 Fort East Martello was constructed during the Civil War and is now a museum. 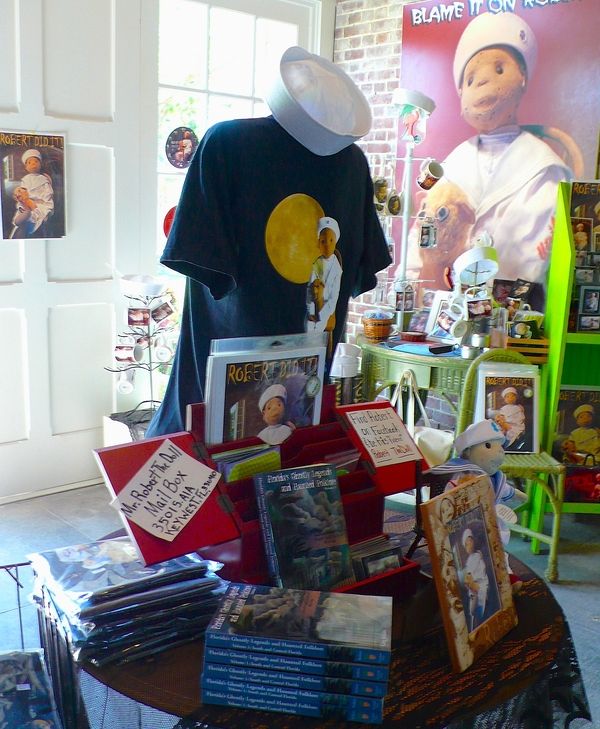 Robert the Doll souvenirs are best sellers at the Fort East Martello Museum. 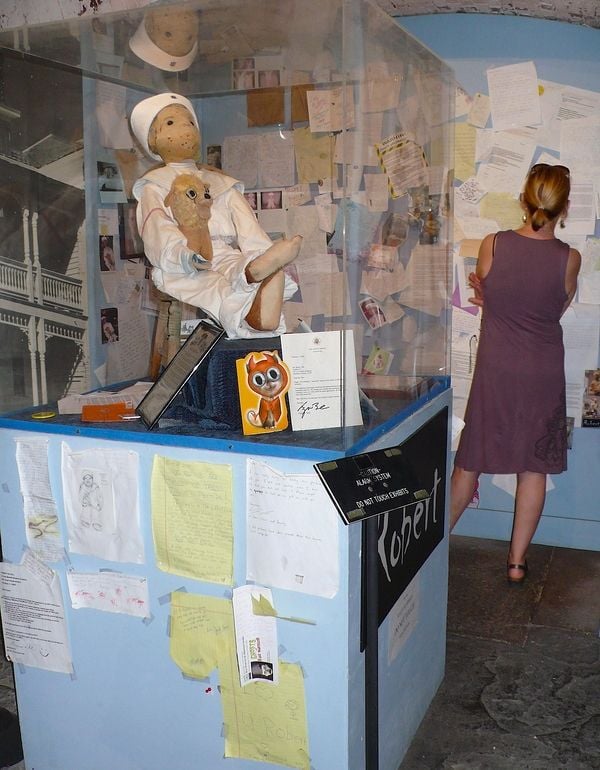 Robert the Doll's exhibit case and area are plastered with letters, most asking Robert to remove his curse from the unlucky letter writer.

Robert the Doll is kept safely behind a plexiglass case at the Key West museum.

Fort East Martello was constructed during the Civil War and is now a museum.

Robert the Doll souvenirs are best sellers at the Fort East Martello Museum.

Robert the Doll's exhibit case and area are plastered with letters, most asking Robert to remove his curse from the unlucky letter writer.

KEY WEST, Fla. — The large handmade doll sits in a locked plexiglass case at the Fort East Martello Museum. But is the secured case a protection for the one-of-a-kind doll? Or is it for the safety of visitors to this Key West attraction?

After all, this unusual figure dressed in a sailor suit is not an ordinary toy. Known as "Robert the Doll," the century-old figure is said to be haunted and able to cast spells on those who cross his path.

"There are people who are afraid of Robert," said Cori Convertito, museum curator. "We don't make our staff go around him if they don't want to."

Not to offend him but I had never heard of Robert before I visited Key West. It was a strange window of time when I arrived at the Key West International Airport almost two hours before my flight, noted the easy security line and saw the museum alongside the airport. I love museums and thought I would take a quick look inside. Despite its somewhat crumbling exterior, the museum is an unexpected gem.

"We have a lot of visitors who walk over from the airport when their flight is delayed or they have extra time," Convertito said. "They are often surprised at what they find at the museum."

Built in 1862, Fort East Martello was constructed during the Civil War to defend against Confederates. "But it never experienced a hostile assault," Convertito said. Once the war was over, Fort East Martello was abandoned. In 1950, the Key West Art & Historical Society saw the potential for the unfinished fort to become a museum.

While the museum has interesting exhibits on Key West military history, art and local industries, it is Robert the Doll who initially draws most visitors. So popular is he that Robert even has his own Facebook page.

"We get letters almost every day addressed to Robert. We get emails for Robert from people as well, especially from overseas and from younger kids," Convertito said.

Robert's exhibit space was crammed with letters when I visited. Most of the letters were asking for forgiveness, imploring Robert to remove the curse he must have placed on the unhappy letter writer.

So, to start at the beginning. Robert was "born" on Oct. 25, 1904, as a fourth birthday gift for Robert Eugene Otto. Stuffed with wood wool with shoe button eyes, the 40-inch doll was said to be created by a Bahamian servant skilled in black magic and voodoo. The birthday boy loved his little buddy, proclaiming that henceforth the doll's name would be Robert and that he himself would now go by the name Gene.

Gene and Robert were inseparable. Gene's parents would hear boy and doll talking and swore that the other voice in the conversation was definitely not their son. Sometimes, they said, the doll would emit a terrifying giggle. Neighbors said they saw the doll move from window to window in the house when the family was out. Whenever anything got broken or mischief was afoot, Gene always proclaimed that "Robert did it!"

So it went throughout Gene's childhood. But little boys, unlike dolls, grow up. Gene went off to school to develop his budding artistic talents while Robert was relegated to the attic. In Paris, Gene met his wife Annette Parker. The two married on May 3, 1930, and moved to New York.

All went well until Gene's mother became ill and Gene and Annette had to return to Key West. Annette didn't like the isolation of Key West and was upset when Gene dragged out his childhood doll. Annette hated Robert and thought her husband's personality change was related to the spooky doll. When Gene died in 1974, his widow stuffed the doll into a trunk and banished him back to the attic. There he remained – or did he? – until he was donated to the Fort East Martello Museum in 1994.

Sitting on a doll-size wooden chair in his display case, Robert is holding a wide-eyed stuffed lion named Leo in his lap. Supposedly, Leo joined Robert during a bizarre adventure when the lion mysteriously moved from a nearby display to Robert's lap. Was Robert lonely and seeking a pet of his own? Museum keepers didn't know but they let Robert keep him.

Legend says that Robert does not like to have his photograph taken without first being asked and woe to those who do. "You have to ask Robert permission to take a photo," Carlitto said. "And if you don't, you will have bad luck."

Robert has been said to exact his vengeance in many ways but especially on electronic devices. Cell phones and cameras have been known to break. Photos in cameras have disappeared or been destroyed. Letters tacked around his plexiglass home attest to that and much more.

"I ask that you please extinguish your grip on my life so that I may find some peace … I feel now that there are forces in this world not to be laughed at ," wrote May from Kentucky. "I was never superstitious until now," wrote Alyssa from Wisconsin (the last names are on the letters; I have just chosen not to use them). "I have found out the hard way that it is very much true … Please accept my apology."

For Karen Simpson of Chicago, the sight of Robert and all the letters was enough for her to put down her camera. "I don't even want to take a chance," she said, sliding her cell phone out of view as well. "There are many strange things in the world and no sense pushing my luck."

A TAYLOR-MADE LIFE: Shower the people you love with love

A TAYLOR-MADE LIFE: Shower the people you love with love

Reader-submitted photos from local events and happenings in June.