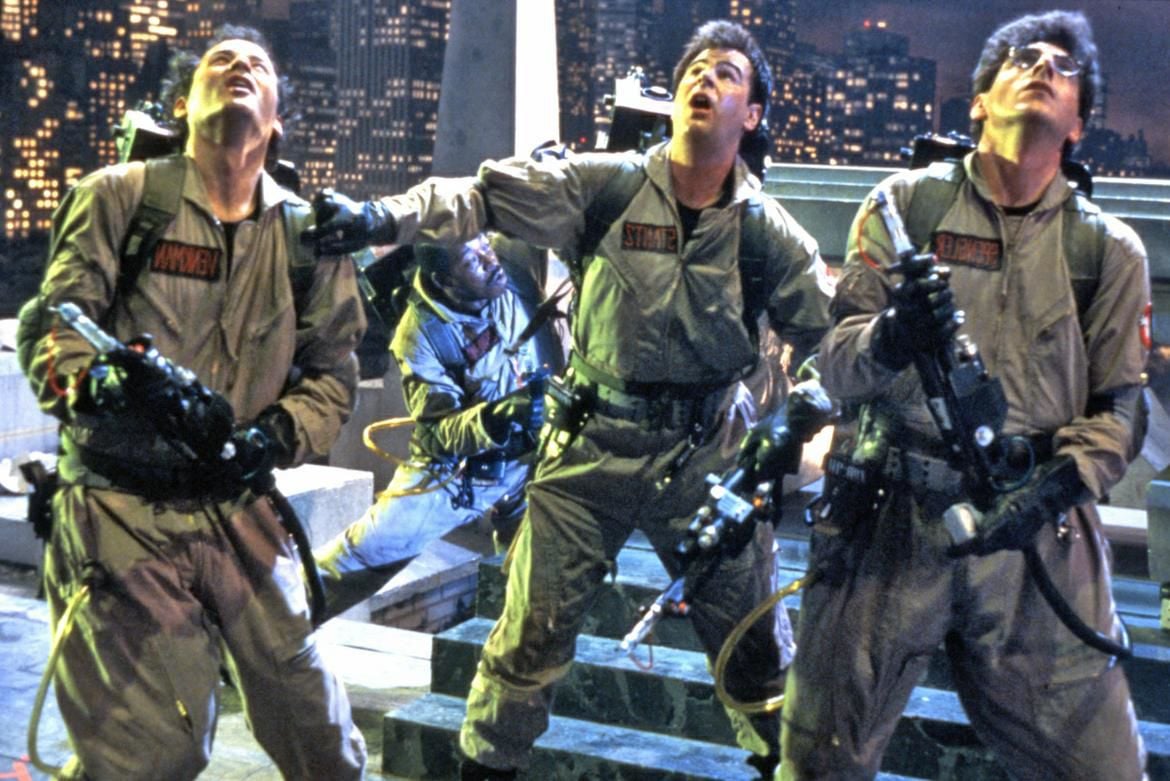 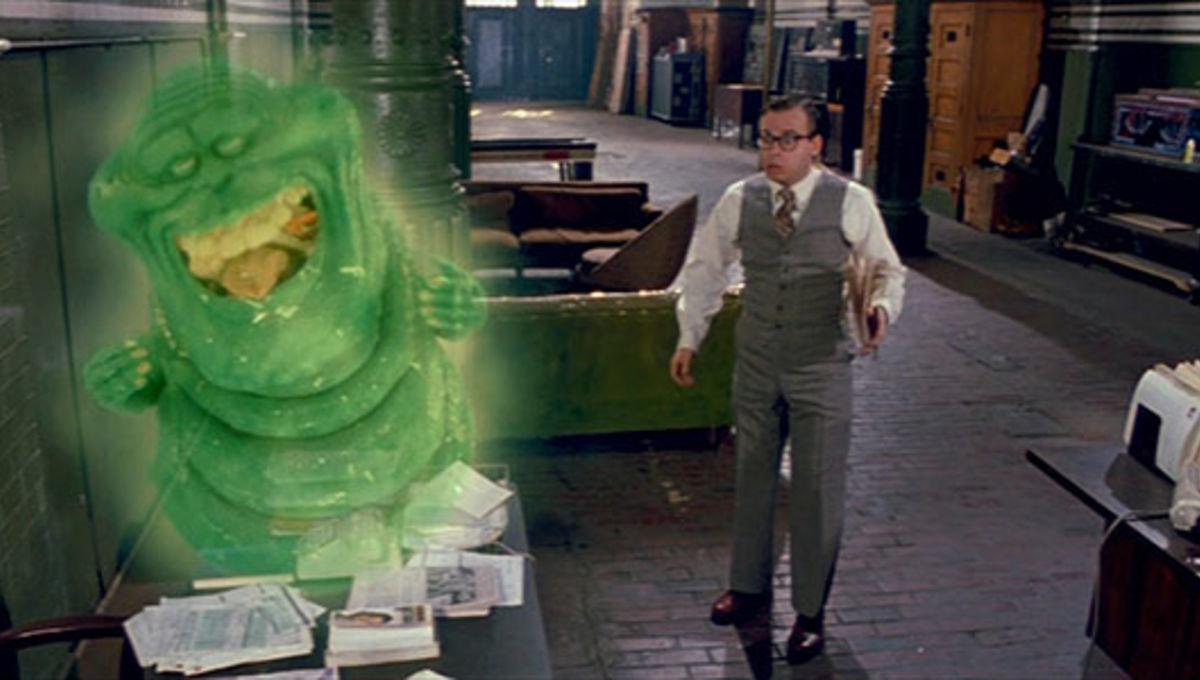 Slimer is an ever-lasting image of "Ghostbusters."

Slimer is an ever-lasting image of "Ghostbusters."

Dad was in automotive manufacturing during what was rather tumultuous times for the industry, and Mom worked in retail. We weren’t poor, mind you. Let’s just say we were penny pinchers by necessity.

Going to the movies was a real treat that came few and far between. Fortunately, though, we lived in a small town — population 1,500, give or take a few — with no theater. So, it wasn’t like the bright lights of the marquee were in my face flaunting a luxury I couldn’t afford. In fact, the closest theater was 12 miles away. Worse yet, the closest legit theater with multiple screens was 20 miles away.

We were stuck waiting until movies came out on VHS or, worse yet, until they made their way to TV. We were a little behind the times to say the least.

Flash forward to today, and I’m a super geek for theaters playing previously run movies. That’s because it’s a chance for me to finally see them on the big screen. A few years back, I got to see an anniversary showing of “Dirty Dancing” in a theater. And just last year, I caught “The Shawshank Redemption” on its 25th anniversary.

So, imagine my surprise when I visited the Fandango website this week to see if there were any showings for what used to be the Daily Journal’s weekly rundown of theater offerings — back in pre-pandemic times.

What I found was showtimes for several older run movies, including “Ghostbusters,” playing at the Paramount Theatre in downtown Kankakee. Geek mode ensues.

None of the titles were anniversary showings, so I wondered what was going on over there.

I called up Chris Johnson, CEO of Classic Cinemas, to find out.

“’Cause there’s no new movies to play,” he said with a laugh.

Turns out the studios aren’t releasing new movies yet, thanks to the pandemic. Those won’t come until later this month and into August. They’re waiting for more theaters to open, specifically in key cities New York and Los Angeles, he said.

In the meantime, he says, they’re filling in the gaps with previously run titles.

They’re all great titles worth seeing for the first time or for a second time, he said. And for the truly old school titles — “Ghostbusters,” “Jurassic Park” and “The Empire Strikes Back” — it’s also a great chance to share a piece of your formative years with your children.

Johnson said he hopes the titles attract more viewers to the theaters, which have been open for a week with diminished crowds.

“Everybody that’s gone has loved it,” he said of those who have ventured back out to theaters after their three-month closure. “It’s just a matter of getting more people to get out and go. There was definitely that core group that wanted to get in right away and they did.”

He said he wishes more people would come back to the movies, but he understands the hesitation. But, he said, the theater is taking additional precautions to ensure the safety of all.

For those who have worries, he said, you will find plenty of room to space out in the theater.

The additional precautions are new, but the escapism of watching a movie on the big screen is not.

“Once you settle in, get your concessions and all that, it is just an amazing escape,” he said. “One you don’t really appreciate until after it’s done.”

Movies are a chance to enjoy something collectively and forget “about all the stuff that’s going on.”

Coming next is “The Empire Strikes Back,” “Black Panther,” “Inside Out,” “Jurassic Park,” “Beauty and the Beast” (live-action version) and “Bohemian Rhapsody.”

Showing this week at Paramount Theatre

Gist of the story: Poppy (Anna Kendrick) and Branch (Justin Timberlake) discover there are six different troll tribes scattered over six different lands. Each tribe also is devoted to six different kinds of music — funk, country, techno, classical, pop and rock. When rockers Queen Barb and King Thrash set out to destroy the other music, Poppy and Branch embark on a daring mission to unite the trolls and save the diverse melodies from becoming extinct.

Gist of the story: Raised by a family of wolves since birth, Mowgli (Neel Sethi) must leave the only home he's ever known when fearsome tiger Shere Khan (Idris Elba) unleashes his mighty roar. Guided by a no-nonsense panther (Ben Kingsley) and a free-spirited bear (Bill Murray), the young boy meets an array of jungle animals.

Gist of the story: Wade Wilson (Ryan Reynolds) is a former Special Forces operative who now works as a mercenary. His world comes crashing down when evil scientist Ajax (Ed Skrein) tortures, disfigures and transforms him into Deadpool. The rogue experiment leaves Deadpool with accelerated healing powers and a twisted sense of humor. He uses his new skills to hunt down the man who nearly destroyed his life.

Thirty years after the defeat of the Galactic Empire, Han Solo (Harrison Ford) and his young allies face a new threat from the evil Kylo Ren (Adam Driver) and the First Order.

After the members of a team of scientists (Harold Ramis, Dan Aykroyd, Bill Murray) lose their cushy positions at a university in New York City, they decide to become "ghostbusters" to wage a high-tech battle with the supernatural for money. They stumble upon a gateway to another dimension, a doorway that will release evil upon the city. The Ghostbusters must now save New York from complete destruction.