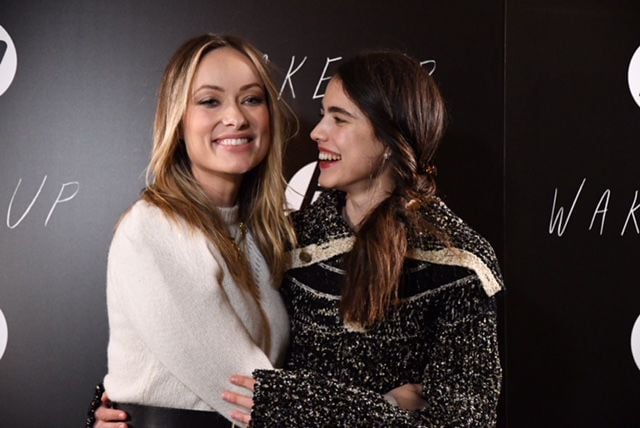 Olivia Wilde, left, showcased her most recent short film “Wake Up,” which addresses the difficulty and necessity of balancing technology with human connection. Starring Margaret Qualley, right, this visceral film eloquently portrays how consumed we are with our gadgets and while they are a necessary and vital part of our lives, we must remember to “look up.” 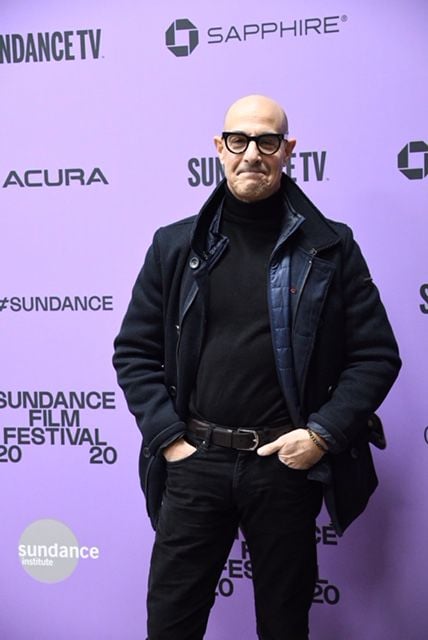 Stanley Tucci stars in “Worth,” which tells the lesser known true story of the government’s attempt to monetarily help the survivors of 9-11. While the film is an overall depiction of the situation, it beautifully portrays three main characters which allows us to connect with the gravity of the event.

Olivia Wilde, left, showcased her most recent short film “Wake Up,” which addresses the difficulty and necessity of balancing technology with human connection. Starring Margaret Qualley, right, this visceral film eloquently portrays how consumed we are with our gadgets and while they are a necessary and vital part of our lives, we must remember to “look up.”

Stanley Tucci stars in “Worth,” which tells the lesser known true story of the government’s attempt to monetarily help the survivors of 9-11. While the film is an overall depiction of the situation, it beautifully portrays three main characters which allows us to connect with the gravity of the event.

The 11-day 2020 Sundance Film Festival, taking place in the quaint ski village of Park City, Utah, has drawn to a close. More than 15,000 films were submitted from 142 countries in the form of narrative features, documentaries, and short films resulting in 244 total films at this year’s fest. Screening more than 20 films over a 5-day period and attending panel discussions as well as red carpets, it’s easy to discover what’s going to be worth seeing not only in theaters, but also streaming in the comfort of your home soon.

Inclusion and acceptance was highlighted at the fest, not only in the trailers prior to each film and the signage everywhere, but also in the content of films. Netflix’s “Crip Camp” was a prime example of this on opening night with Nicole Newnham and James LeBrecht’s documentary depicting the story of teens with physical disabilities in the 1970s who attend Camp Jened near Woodstock, N.Y. This “ramshackle” camp allows these teens to be people, not just handicapped people which in turn changed their future and the future of anyone who has a disability. It’s an incredible journey that shines a light on activism, acceptance, and our perception of one another as we are educated about the Americans with Disabilities Act.

Episodic Docuseries found a home at Sundance this year with Showtime’s “Love Fraud,” airing May 8, and Steve James’ “City So Real.” In “Love Fraud,” Heidi Ewing and Rachel Grady tackle con artist Richard Scott Smith who has swindled women out of their life savings, leaving them with mountains of debt — until the women decide to take him on and hire Bonnie, a bounty hunter. It’s a shockingly unimaginable sequence of events capturing the trauma, drama and tenacity of these scorned women and a cast of characters you couldn’t make up.

James’ “City So Real” follows the city of Chicago’s recent mayoral candidates and election while the Laquan McDonald trial boils beneath the streets. James and his team visit the city’s neighborhoods, delving into deeply passionate political and civil discussions, as they discover each community’s voice. James’ journey takes him into barber shops, City Hall, neighborhood parades, Wrigley Field, and candidates’ fundraisers and homes. It’s an incredibly eye-opening portrayal of the racism, violence, apathy, and corruption that exists not only in Chicago, but across our nation. This powerful depiction creates an opportunity to better understand one another and our political system at one of the most important times in our history. (Release date TBD)

As Sundance embraces the multiple platforms for entertainment viewing, Olivia Wilde showcased her most recent short film “Wake Up,” a collaboration with Hewlett Packard. “Wake Up” addresses the difficulty and necessity of balancing technology with human connection. Starring Margaret Qualley, this visceral film eloquently portrays how consumed we are with our gadgets and while they are a necessary and vital part of our lives, we must remember to “look up.” (Streaming soon)

BEST OF THE FEST THEATRICAL FILMS

“The Father” stars Anthony Hopkins and Olivia Colman in one of the most emotionally and intellectually insightful films portraying a father, Anthony (Hopkins) who is in the cognitive decline of dementia. His daughter Anne (Colman) must wrestle with his condition, but it is we, the viewer, who sees the world through Anthony’s eyes. We experience his confusion, anger, and frustration as we are allowed to walk directly in his shoes, step by step, as his orientation to time, place, and people waxes and wanes. Hopkins’ portrayal is mesmerizingly evocative and genuine; it’s the performance of a lifetime. First-time writer/director Florian Zeller whose play of the same name this is based upon, has created one of the most compelling and insightful stories at the fest.

“Dream Horse” is a narrative feature film based on the documentary “Dark Horse” by Louise Osmond. Starring Toni Collette as Jan Vokes, a middle-aged woman in an impoverished town whose life has little to hope for until she decides to breed a race horse. Against all odds, but with the townspeople banding together to help financially, the horse named Dream gives them all hope. With skillful cinematography, a gripping story, and characters we grow to love, the story envelops you and you become one with this group of lovable characters.

“Ironbark” brings us back to the 1950’s Cuban Missile Crisis as Greville Wynne (Benedict Cumberbatch), an ordinary salesman, finds himself as a British spy infiltrating the Russian government. History is forever changed by the courage of this man, but it is the story of friendship of two men, Oleg Penkovsky (Merab Ninidze) and Greville, that is the heart of soul of it. This thriller transports us into chilling and dangerous situations while it connects us to the characters whose integrity reigns supreme. (Release date TBD)

“Save Yourselves!”written by Eleanor Wilson and Alex Huston Fischer, tell the story of Su and Jack (Sunita Mani, John Reynolds), a Brooklyn couple who disconnects from the world in an attempt to reconnect with one another as they take a vacation in the woods. Unbeknownst to them, the world is now under attack from aliens (please keep reading), but they are blissfully ignorant until Su turns on her phone. This seems like a premise that’s been done before, but not like this. With an incredibly succinct script, tight editing, and non-stop hilarity, the story takes so many twists and turns that you’re always surprised. Mani and Reynolds are pure magic together, balancing one another’s characters and allowing one another’s comedic styles to shine. (Release date TBD)

“The Assistant,” written and directed by Kitty Green, portrays Jane (Julia Garner) as a young assistant to a powerful entertainment executive. As she witnesses the abuse from within, she, unlike her colleagues, has difficulty turning a blind eye. It’s an introspective, personal, and fly-on-the-wall perspective pitting morality and personal gain against one another which incites dialogue about our own values, what we allow, and where the line is drawn in stepping up to help not just ourselves but our future selves. It’s a haunting film that slowly seeps into your core, provoking you intellectually and emotionally. (In theaters 1-21-20)

“Downhill” is based upon the 2014 Swedish film “Force Majeure” about a family traveling abroad and experiencing an avalanche. The near miss reveals their true selves, and begins to unravel their relationships with one another. While this American version maintains the core of the film, writers and directors Nat Faxon and Jim Rash give the story many more comedic elements. Marriage, kids, and how our relationships change over the years bring both comedy and drama, but it is Julia Louis-Dreyfus whose recounting of “the event” that brings us to our knees. Although “Downhill” doesn’t have the same heft as the Swedish version, it’s an entertaining one. (Releases 2-14-20)

“Worth” tells the lesser known true story of the government’s attempt to monetarily help the survivors of 9-11. Michael Keaton stars as Ken Feinberg who endeavors to formulaically pay for the lives that were lost. Stanley Tucci’s character of Charles Wolf leads the masses to “Fix the Fund” which plunges Feinberg into a moral dilemma and his firm’s ability to understand the true value of life. While the film is an overall depiction of the situation, it beautifully portrays three main characters which allows us to connect with the gravity of the event. (Release date TBD)