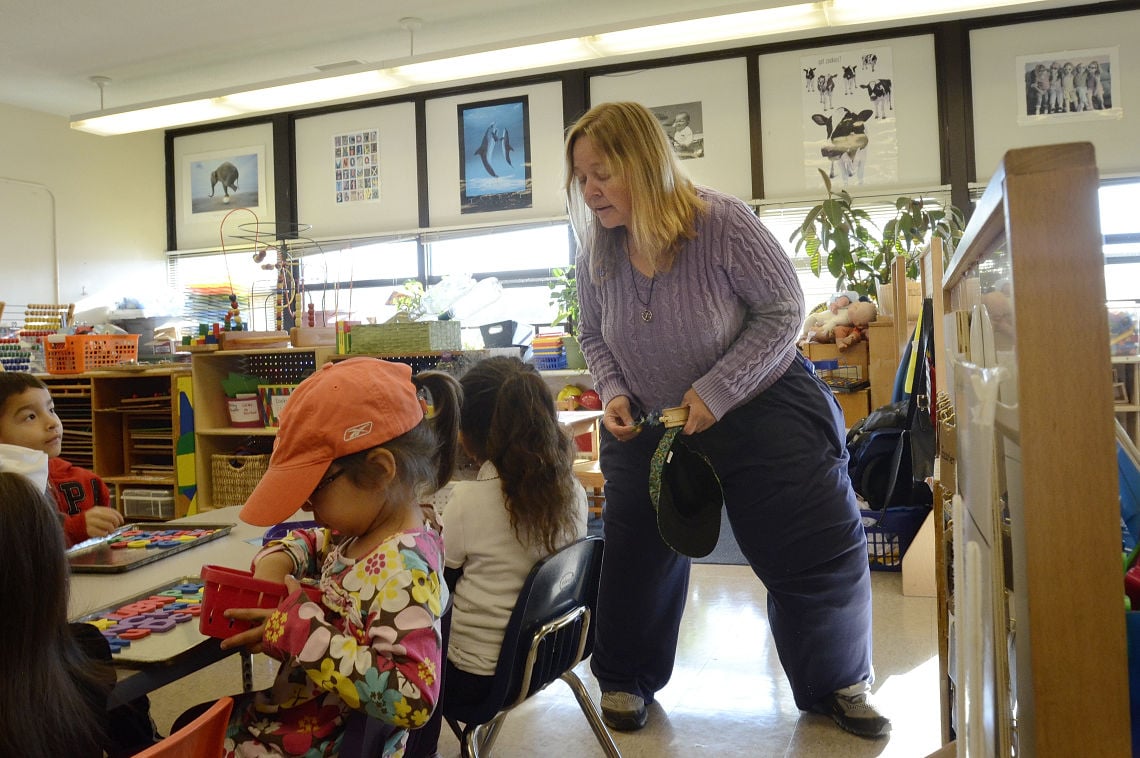 Karen Dannenhauer talks to her preschool students in class at Mark Twain Primary School in Kankakee. Dannenhauer who wears a Fitbit bracelet to track her daily steps says she averages 8,000 to 10,000 steps per day, and every one of them is painful. She has learned to measure her steps carefully in her classroom. She has been teaching for 28 years and says her preschool students have no inhibitions about her large leg. She has been asked,” Did you eat too much to make your leg bigger?” She has also been told,”I love your big leg.” And her students draw Miss Karen with one small and one large leg. She laughs about it. 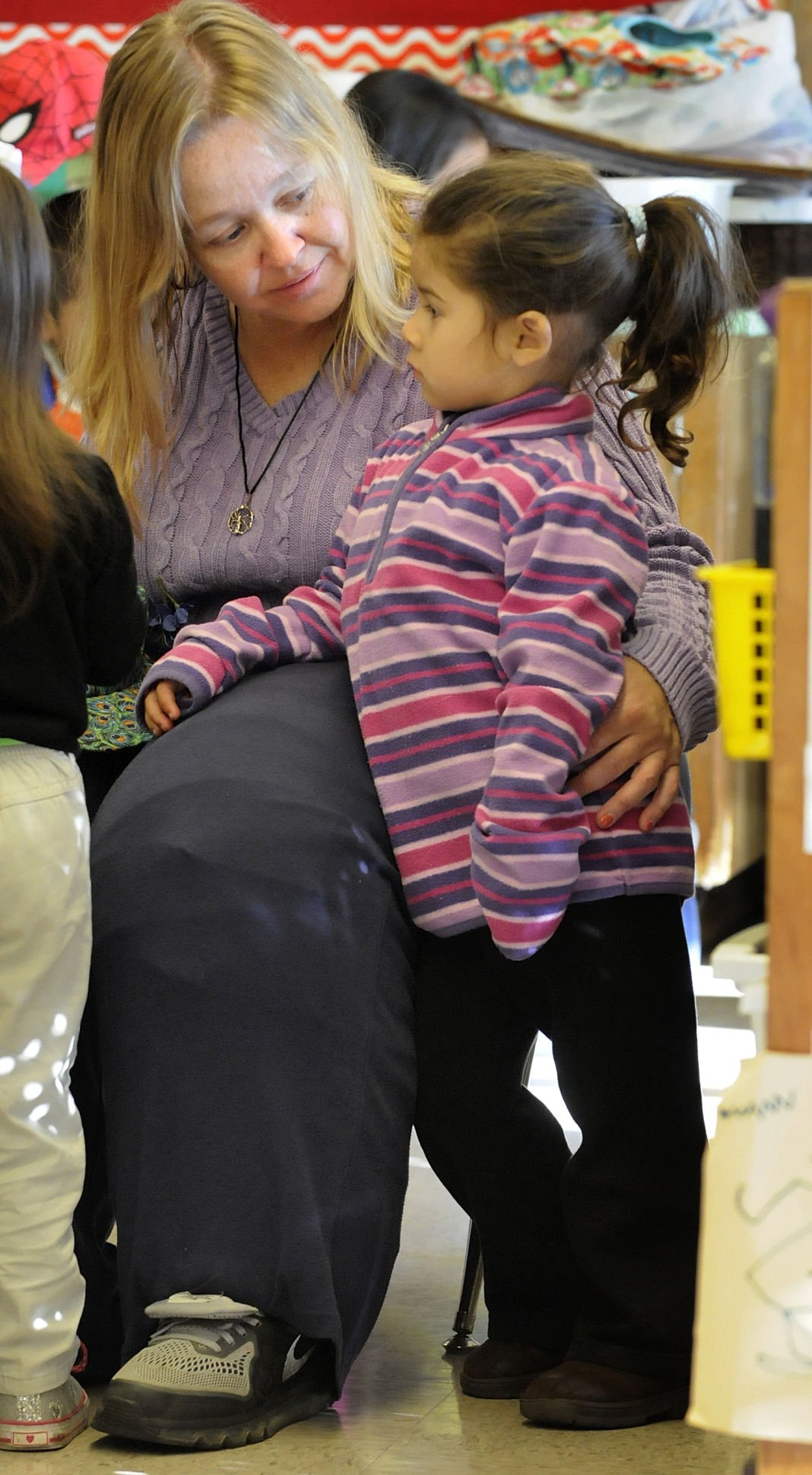 Karen Dannenhauer talks to her preschool students in class at Mark Twain Primary School in Kankakee. Dannenhauer who wears a Fitbit bracelet to track her daily steps says she averages 8,000 to 10,000 steps per day, and every one of them is painful. She has learned to measure her steps carefully in her classroom. She has been teaching for 28 years and says her preschool students have no inhibitions about her large leg. She has been asked,” Did you eat too much to make your leg bigger?” She has also been told,”I love your big leg.” And her students draw Miss Karen with one small and one large leg. She laughs about it.

Karen Dannenhauer never had kids because of lymphedema, a non-curable disease that has filled her lower body with 100 pounds of hardened cellular "sludge."

Her legs have grown for decades, but that hasn't stopped the 50-year-old from enjoying children. She has taught at Mark Twain Primary School the past 28 years. If anything, teaching has empowered her. It has given her thousands of kids.

"Some doctors tell me I should go on disability and not work," Dannenhauer said. "That would be better for my leg, but I'm not just my leg. I'm all of me. The rest of me wants to keep teaching. I still have stuff to offer."

The disease has limited her mobility. Layers of constraints bind her legs for at least 23 hours per day to keep fluids from settling. She uses a cane to walk and avoids sitting on the floor because of damage to her knees. However, relief may come within a year.

A $30,000 procedure could shrink her left leg. But right now, it's a matter of raising money for the procedure that insurance, at this time, doesn't cover. A Go Fund Me account has been set up, and school fundraisers have contributed thousands toward her cause.

Does the shoe fit?

Dannenhauer's fight against lymphedema officially began where Cinderella's story ended. She bought shoes for junior prom, but they didn't fit once the dance approached.

A doctor's visit followed and explained years of random swelling throughout her body. She was diagnosed at 16. The lymphatic system is like a sewer. When it clogs, liquid cellular waste builds up in the body and hardens. It can be obtained through genetics or injuries.

Dannenhauer, who lives in Kankakee, is the only person in her family to be affected. At first, the diagnosis didn't faze her. She thought she was fine even though the doctor said lymphedema couldn't be cured. After all, she was playing soccer, softball and running.

"It is like diabetes. There is no treatment," said Nicanor Contiangco, Dannenhauer's physical therapist. "You can maintain it, or you can just let it go, and there are a slew of problems following it."

Baggy sweatpants filled her wardrobe as her legs grew, but she tried to ignore the problem.

"My leg wasn't that big that I had to deal with it," Dannenhauer said. "I wanted it to not be there, so I pretended it wasn't there. I did everything I could to not make it show. I dealt with it largely by denial until it became too big to ignore."

Her growing legs saddened her and became an excuse for why she couldn't perform certain tasks. But, her friend Theresa Burgard, a former speech therapist and track coach in Kankakee School District 111, who died of cancer in 2011, wouldn't have it.

Burgard inspired Dannenhauer to keep moving. Now, all it takes to motivate Dannenhauer is to tell her she can't do something.

She is a member of the Kankakee River Running Club and has a personal trainer at Riverside Health Fitness Center in Bourbonnais, where she does yoga and occasional pool exercises.

"She doesn't let lymphedema define her," said Emily Lavoie, Dannenhauer's personal trainer. "She wants everyone to see her as someone who isn't affected by it. She's very inspiring to a lot of our other members."

Although her race times are rising, Dannenhauer feels content with finishing a long walk using her crutches. She has completed races over the past few months.

"I want to show people that runners and walkers come in all shapes, sizes and abilities," Dannenhauer said before a stoic pause.

"I'm always the last one to finish, but one day I may not be able to run or walk. All sorts of bad things happen to people when they have lymphedema. So, I'm going to do stuff up until I can't."

Pain pierces through Dannenhauer's body every morning, keeping her from walking until her medication kicks in.

She sleeps with two layers of constraints covering her ankles to her hips. Her leg rests at an incline to keep fluids from settling in her lower body. Besides showering, she never takes the $2,000 spandex constraints off. When she does, she can't stand for too long before a blood rush makes her dizzy.

Then, it takes her almost an hour to suit up in her armor of special spandexes, socks and bands. She compares her leg to a child. She can't go anywhere without preparing it.

"It's one of the reasons why I never had kids," she said. "Maintaining myself is hard enough. I knew kids weren't in my future because of this, and I didn't want to pass it along."

Dannenhauer has had about 70 cases of cellulitis, which could be life-threatening, due to bacterial buildup in her legs. For 13 years, doctors prescribed her diuretics that worsened her condition. Even so, she claims she's more fortunate than others with lymphedema.

"It's easy to look around and see people who have it worse," Dannenhauer said. "I have legs that work. They're not pretty. They're not great, but they work."

Pain would persist whether she's at home or at school. So, she would rather be at school, where her students ease her pain. She also serves on the district's wellness committee.

"She cares deeply about her students, and they often come back to visit her," said Jenny Way, principal of Mark Twain. "She's passionate about teaching and brings a lot of energy to the profession. She's a vital part of Mark Twain."

Students ask Dannenhauer about her leg and draw it proportionally in pictures. Many of them hug and touch it. In one case, a 4-year-old student defended her when a new student asked about her leg.

"It's educational," Dannenhauer said. "They learn to accept differences and that everyone isn't the same."

A model for improvement

It's those students who are encouraging Dannenhauer to take on the next battle in her war against lymphedema.

She learned about a surgery that had been researched by Swedish doctors for more than 20 years — a $30,000 procedure that is the lymphatic system's equivalent to liposuction, in which gallons of fluid will be removed from her left leg. Now, she's preparing for a December appointment in Los Angeles with the hope of having the procedure done next June.

"The surgery is very promising," Contiangco said. "She will still have to do management on her own, but she will be doing it on a much smaller leg."

But that all hinges on funding. That December appointment begins an "uphill battle" with insurance companies. Dannenhauer said only one doctor performs the surgery in the United States.

The operation would reduce her risk of cellulitis to practically nothing, in addition to shrinking her leg.

She has arranged a GoFundMe account with her target goal at $30,000. That doesn't include the extended hotel stays and numerous flights to Los Angeles. In total, she may face up to five surgeries.

As of press time, the account has raised more than $7,500 — in just one month. And Kankakee schools raised $3,700 last week through a fun run at Kankakee High School, in which some students wore jeans.

Dannenhauer admitted she felt uncomfortable taking donations until some friends reminded her of all she has done to help children become adults. Now, opening her email is like Christmas, with donors helping to repair her legs.

"I'm just amazed at how generous people have been," Dannenhauer said. "I know some of them, and some of them are complete strangers. It's heartwarming."

John Cummings contributed to this story.