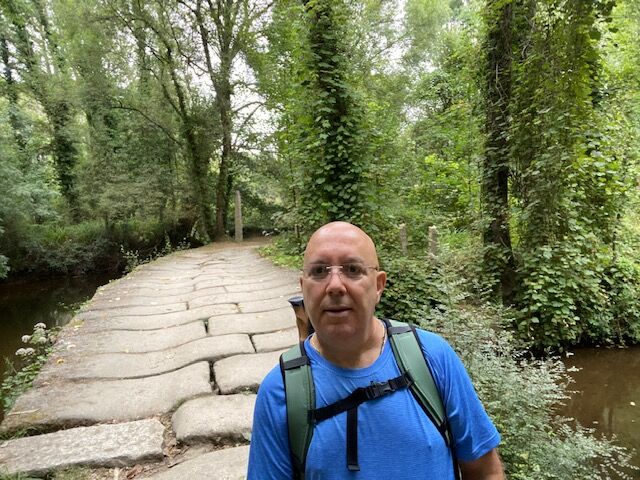 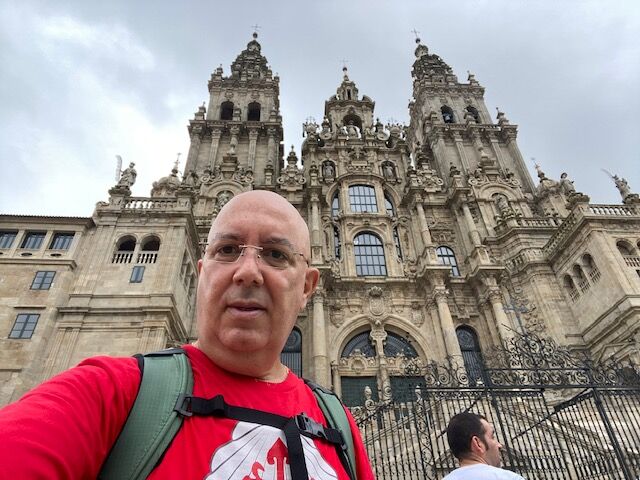 Bob de Oliveira, of Kankakee, poses outside of the Camino's "finish line," a cathedral in Santiago, Spain. READ MORE. 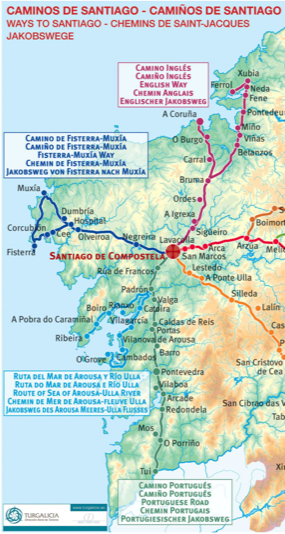 Bob de Oliveira, of Kankakee, poses outside of the Camino's "finish line," a cathedral in Santiago, Spain. READ MORE.

It was a physically demanding journey.

It was a deeply spiritual journey.

And it was a journey of forgiveness.

From Aug. 27 to Sept. 9, Bob de Oliveira, a retired Kankakee School District teacher, walked the Camino de Santiago, the “Way of St. James,” in Portugal and Spain, one of the three great pilgrimages in Christianity. It falls behind only the pilgrim walks to Rome and Jerusalem.

Wearing track shoes and hauling a backpack from REI, de Oliveira covered 80 miles. Much of the terrain is simple dirt and stone. Many of the bridges date from Roman times, worn smooth by the sandals of the Legions.

There are several trails that make up the Camino. Some travel west from other parts of Spain or France. Others begin in Portugal and head north. All routes converge on the northwest corner of Spain at Santiago, the reputed burial place of St. James, one of the original 12 apostles. Santiago is adjacent to Finisterre, a rocky peninsula that juts into the Atlantic. In the centuries before the discovery of the Americas, Finisterre was “the end of the world.”

In recent years, the journey has grown as a physical challenge, a tourist attraction and a religious experience. As many as 300,000 people per year take the walk.

“They say you have to have a reason to travel the Camino,” de Oliveira said.

In his case it was to make peace with the memory of his father, Clemente, now dead for 37 years. De Oliveira had judged his father, harshly.

Meditating and praying as he walked, de Oliveira said he was waiting for three signs he had connected with his father. He found them. He saw a building dedicated to “Clemente.” Later, as he walked over an old bridge, the Ponte Vrandrar, there was a house, the Villa San Clemente. The third sign was a supermarket with the name Clemente.

There were times, de Oliveira said, when he could hear footsteps behind him. Although there are a lot of people who make the walk, they are spread out over many paths and many days. Often, the pilgrims travel alone. Yellow arrows guide along the route, but de Oliveira got lost on occasion.

On the last day, de Oliveira passed a 9-year-old boy.

“You know,” the boy told him, “you are not walking alone.”

Reaching the cathedral at the finish, de Oliveira said an Our Father and three Hail Marys. He got his picture taken.

Other than that, his souvenirs were minimal. He took away a garment with a red Crusader cross. He also had a passport book, which all pilgrims carry to identify themselves as such. Pilgrims get stamps, each one colorful and unique, at the stops along the way. At the end, successful pilgrims get a certificate.

The real reward is a transformative one inside.

“I got a sense of peace,” he said. “You discover that we don’t need all this stuff. We can be happy with much less.”

The Camino is a different pace of life, a slower one every day.

An experienced traveler, de Oliveira is fluent in both Spanish and Portuguese. He had many aspects to his career, but much of its was spent teaching bilingual classes and English as a Second Language before retiring with 26 years of work in Kankakee Schools.

For several years, de Oliveira led trips of Kankakee High students to Spain in the summers. It was a trip to Burgos, in the Basque region of Spain, that helped spark the idea to hike the Camino. There, he saw seashells embedded in the sidewalk. That visual is also a symbol of the Camino.

So, he came to the conclusion to do it when he retired. He began training in March, starting with 3-mile hikes and working up to 12. He read a dozen books on the Camino. A Type 2 Diabetic, he takes good care of his health.

He was pleasantly stunned when his spouse, Bill Sole, flew to Portugal to cheer him on as he stepped off to start. En route, de Oliveira had hired a firm to move most of his gear. You walk from hotel to hotel along the journey. Generally you eat breakfast and dinner in the hotel. Lunch is on your own. Twice people de Oliveira did not know paid for his lunch.

For 12 centuries, the common meal on the pilgrimage is Caldo Gallego, a soup of potatoes, beans and cabbage. Chicken bones are swirled in to give it the barest taste of meat.

He took a bit of Kankakee with him. The ashes of Sue Conroy, a deceased Kankakee teacher and friend, were scattered on a bridge. Now they will watch religious pilgrims for the rest of eternity.

De Oliveira carried a well-worn Kankakee River rock along with him. Toward the end he left it on one of the gravel paths. It was not an unusual rock, but he would touch it and pray.

There are dozens of prayers said by pilgrims along the way. Here is one of the oldest to St. James and one of the most recited:

“Be for us our companion on the walk,

Our guide at the crossroads,

Our breath in our weariness,

Our protection in danger,

Our albergue (shelter in English) on the Camino,

Our shade in the heat,

Our light in the darkness,

Our consolation in our discouragements,

And our strength in our intentions.”