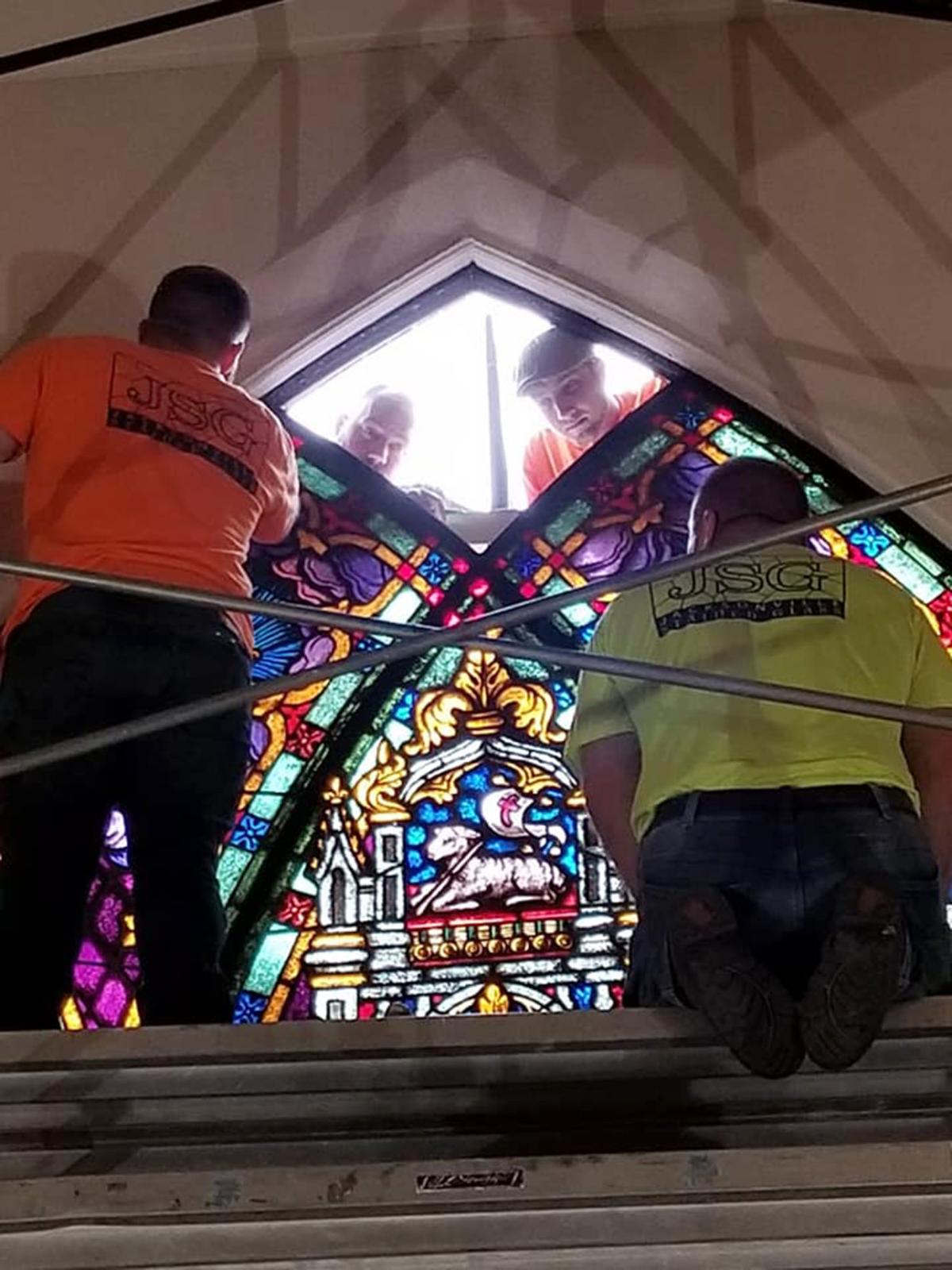 First Presbyterian Church of Kankakee, 371 E. Court St., will celebrate the restoration of their “Last Supper” stained glass window with a ribbon cutting, luncheon and church tours at 11:30 Wednesday. The 18-foot-by-10-foot arched stained glass windows was installed in 1944. A February storm damaged the window and repairs were completed by Jacksonville Stained Glass. 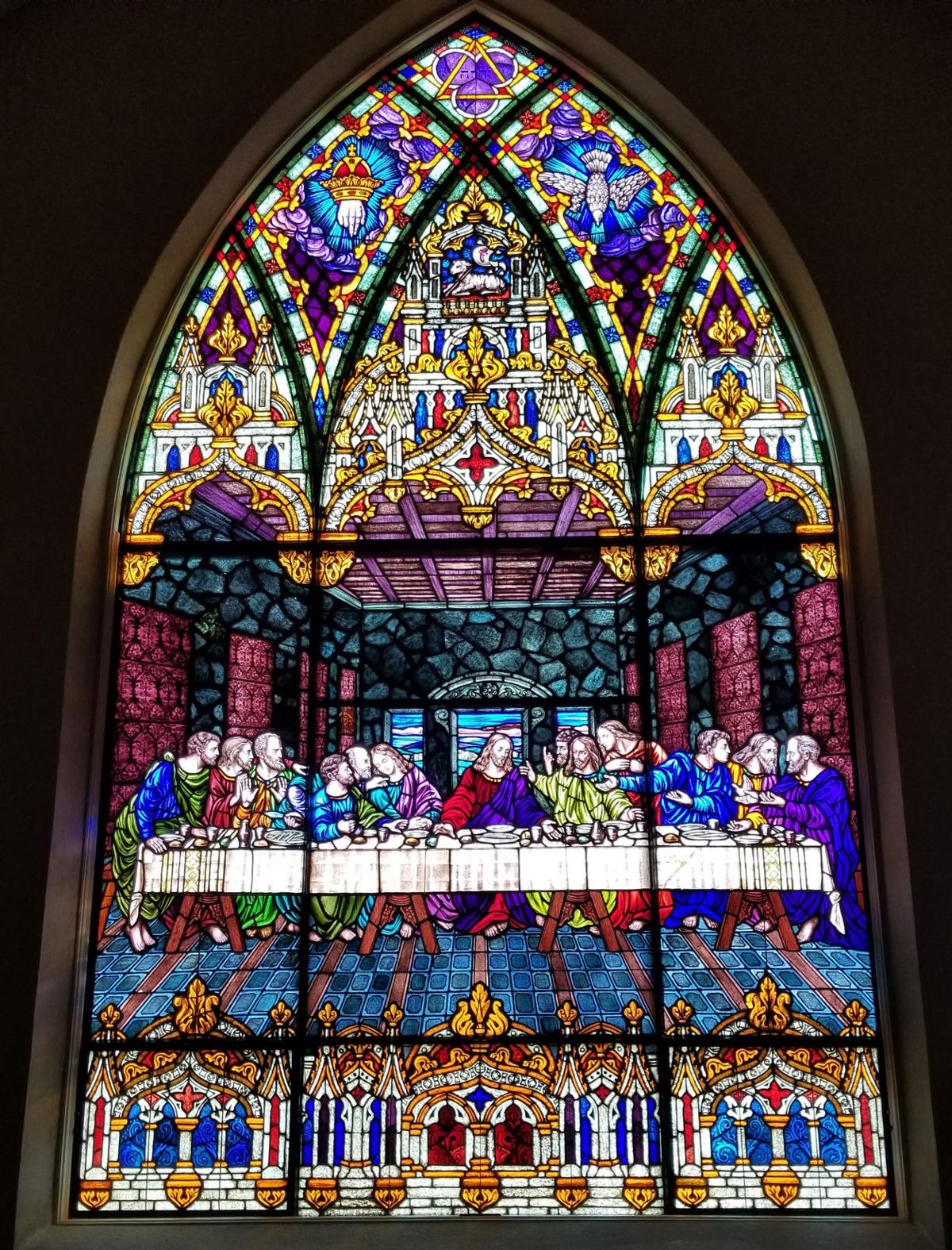 The 18-foot-by-10-foot arched stained glass window was installed in 1944. A February storm damaged the window, and repairs were completed recently.

First Presbyterian Church of Kankakee, 371 E. Court St., will celebrate the restoration of their “Last Supper” stained glass window with a ribbon cutting, luncheon and church tours at 11:30 Wednesday. The 18-foot-by-10-foot arched stained glass windows was installed in 1944. A February storm damaged the window and repairs were completed by Jacksonville Stained Glass.

The 18-foot-by-10-foot arched stained glass window was installed in 1944. A February storm damaged the window, and repairs were completed recently.

The 18-foot-by-10-foot stained glass window of the “Last Supper” by Henry Barth contains more than 5,000 pieces of glass.

The community is invited to celebrate the restoration Wednesday at the church, 371 E. Court St., Kankakee. A Kankakee County Chamber of Commerce ribbon cutting will take place at noon. The event includes a luncheon from 11:30 a.m. to 1 p.m. prepared and served by First Presbyterian Church; Kankakee School District 111 transition program for developmentally disabled students age 18 to 21; and Juan 3:16, a Hispanic congregation of the Iglesia de Dios.

Tours of the church and its 17 stained glass windows will be given at 10:30 and 11 a.m. and 12:30 p.m. Main features of the stained glass tour are four windows by the famed German stained-glass artist Franz Mayer, of Munich, created in the early 1930s, the “Last Supper” window by Barth, the depiction of Jesus: The Good Shepherd and the story of Jesus created in various stained-glass windows throughout the church.

“First Presbyterian Church of Kankakee has been located on the corner of Court Street and Indiana since before the invention of the telephone and before women were allowed to vote,” according to Judy Markham, Clerk of Session. “Our past accomplishments are many and varied, such as having a fantastic pipe organ installed in 1975, having a membership in the hundreds [at one time] and [even now] providing a peaceful and beautiful place for worship in downtown Kankakee.”

On Sept. 28, 1854, First Presbyterian Church of Kankakee was organized by a committee of 10 men and women in the home of Mr. and Mrs. Jepatha Ripley on West Court Street. The original wooden church was removed and the current brick church was erected in 1879 and dedicated in 1880. The builder of the new red brick church was James Lillie, a prominent Kankakee citizen responsible for the construction of many of significant structures in Kankakee.

During the 1930s and 1940s, the interior of the church was improved, and 13 art-glass windows were put in place in the sanctuary. Among them, the large arched “Last Supper” window was installed in the south wall of the building in 1944. The window was paid for by donations from the congregants.

“In 1944, the members of the church had a bold idea,” Johnson said. “The sanctuary was recently remodeled with new pews along with the beautiful woodwork on the altar and around the organ. The space was lovely, but something was missing. The answer? Two 18-foot-by-10-foot arched stained glass windows.”

The stained glass windows continued to be a focal point of inspiration to church goers and visitors. But in February this year, a wind storm with gusts of up to 70 miles per hour hit Kankakee.

Johnson said some of the wood had rotted around the “Last Supper” window, and caulk holding the outer plate glass covering had dried. That allowed the wind to get in between the two windows. The imbalance in pressure blew out the entire outer glass covering, including the frame.

Without repair, it would only be a matter of time before the window would completely fail. To protect the window from further wind damage, it was boarded up.

Workers on both the inside and outside carefully removed old caulk and materials form each panel they worked on.

“It could take up to an hour or more for just one panel. It took just the right mix of force and delicacy,” Johnson said.

He added parts of the process also were to inspect the rebar that connects to points on the panels. There were many instances in which there was no longer a connection, and workers re-soldered points to ensure the structural integrity of the window.

After each panel was repaired and restored, it was put back in place, this time from the bottom up. After all panels were in place, fresh caulk was used to seal them.

“I guess you could say our ‘Last Supper’ window got a 75th birthday present, and we now get to enjoy the beauty of the repaired and restored stained glass for many years to come,” Johnson said.

First Presbyterian Church of Kankakee meets each Sunday at 11 a.m., and Juan 3:16 meets Sunday afternoons and at various times during the week.