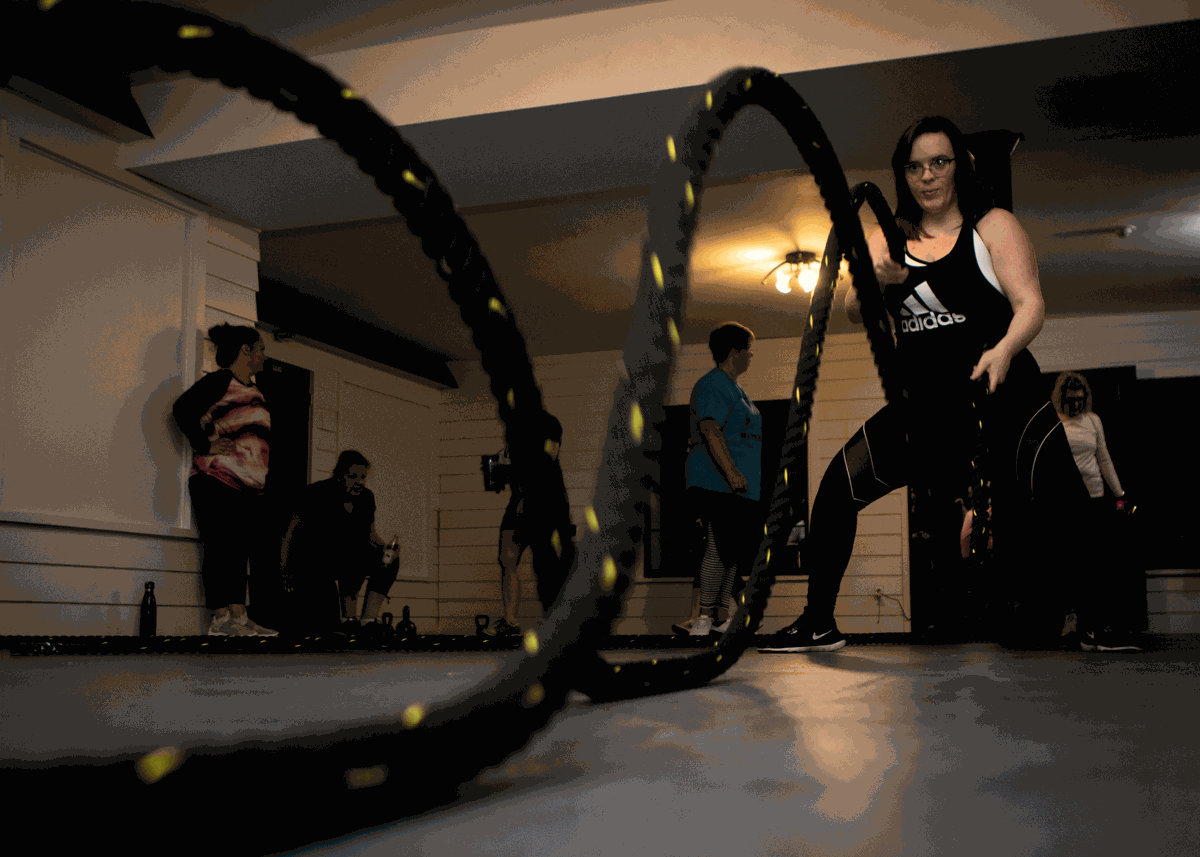 Brandi Justice, 25, of Kankakee, demonstrates how to use battle ropes at Core Fitness for Women, the gym she opened with her partner, Cameron Alexander, on April 8. Core Fitness is in the basement of The Majestic in Kankakee and is meant to be a home for women to empower themselves and work out in a fun, safe environment. 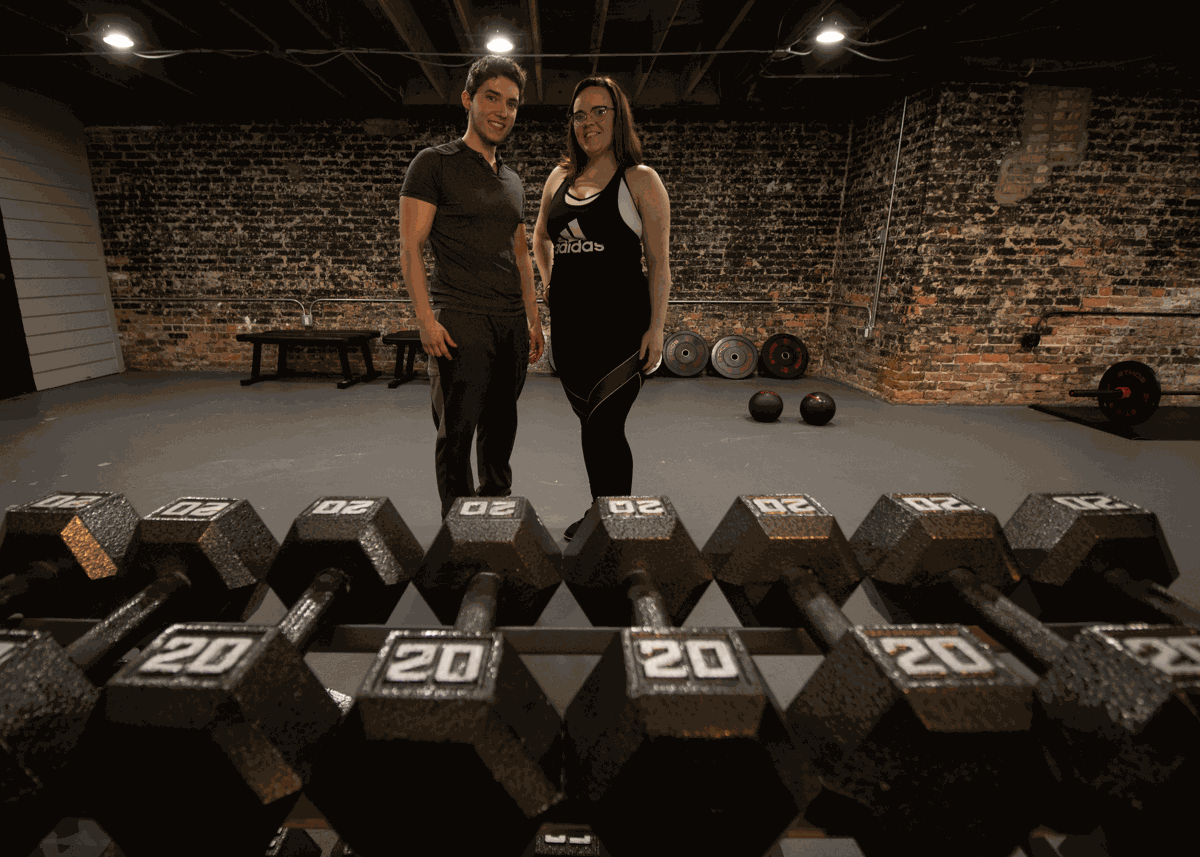 Brandi Justice, right, 25, and Cameron Alexander, 26, opened Core Fitness for Women at The Majestic on April 8. The Kankakee residents urge women to “come home to workout” anytime Monday through Friday at their fitness center.

Brandi Justice, 25, of Kankakee, demonstrates how to use battle ropes at Core Fitness for Women, the gym she opened with her partner, Cameron Alexander, on April 8. Core Fitness is in the basement of The Majestic in Kankakee and is meant to be a home for women to empower themselves and work out in a fun, safe environment.

Brandi Justice, right, 25, and Cameron Alexander, 26, opened Core Fitness for Women at The Majestic on April 8. The Kankakee residents urge women to “come home to workout” anytime Monday through Friday at their fitness center.

The fitness center she opened on April 8 with her partner of three years, Cameron Alexander, isn’t a place for those wishing for quick fad fixes or easy 21-day programs.

Core Fitness, located in the basement of The Majestic in Kankakee, is a home for those who are serious about improving their physical and mental shape by living a healthier lifestyle.

And, it’s only for women.

“Most people go to Planet Fitness [in Kankakee] or Fitness Premier [in Bourbonnais] and they sweat, sure, but they don’t get the results they want because they don’t know what to do or why to do it,” Justice said.

When the 25-year-old Kankakee resident started her own fitness journey a few years ago, she felt confused in a world full of hardcore runners, grunting lifters and intense yogis.

“I felt lost. There’s so many places to go,” Justice recalled, referring to the amount of gym choices in the Kankakee area.

“I would go to those places and I would have no idea what I was doing. I would sweat – yeah, I would sweat my *** off – but I would still have the same results," she said. "I would still look the same, even for months. I was training on my own for probably three to six months at Planet Fitness every single night after work, and I would be tired and still not getting the results I wanted.”

That’s when Justice entered Body Burn Women’s Fitness Center in Kankakee, where she met Alexander, who worked as a trainer at the time in the facility owned by his brother.

The 26-year-old Kankakee resident has been passionate about fitness since first beginning his own journey as a teenager.

“I really got into fitness sometime in high school,” Alexander said. “I was a heavier kid, and that’s not comfortable. I was a fat kid. I was the kid that – I don’t even know if I’m allowed to say this – but they would give me ‘purple nurples’ in middle school. I was that kid.

"I literally couldn’t do a push up ... and I just couldn’t handle it anymore. I was so angry that I had to do something about it, so I joined the track and field team.”

After high school, Alexander joined the National Guard, where he learned more about the human body and the physical and mental aspects of training oneself, as well as others.

Since meeting at Body Burn, Justice and Alexander found they share similar fitness philosophies and decided to open Core Fitness together to empower women to make healthier choices and put themselves first.

“I want to teach these women the skills necessary to not only make their own nutrition guides and their own plans and their ideologies, but also how to heal their bodies,” said Alexander, who understands the healing process more intimately than most.

He recalls when his son, Camden, was born, he was in so much pain that he couldn’t pick him up to hold him. The physical pain he experienced morphed into mental pain, as well, and his state of mind became fractured.

Eventually, with the help of family, friends and fitness, he was able to crawl himself out of that negative mindset. Today, he claims to be in even better physical and mental shape compared to before he was injured.

Alexander, who has since become a certified personal trainer through the National Academy of Sports Medicine, says he now lives completely pain-free. (And he interacts with 5-year-old Camden just fine, too.)

Alexander believes his background, including his school days as well as his painful past, all contribute to his training philosophies, helping him and Justice assist women effectively.

“I see so many people that are physically broken down – they’ve got knee issues, shoulder issues, elbow issues – so the rehabilitation aspect we offer here [at Core Fitness] is so near and dear to my heart because I’ve seen people get off medications," he said.

Driving to a gym for the first time and having the courage to get out of the car is oftentimes the hardest part of starting a fitness journey, Justice admitted.

“We just ask everyone to trust us,” she said, “and once they walk through that door, their whole picture in their mind will change. [Core Fitness] is an empowering environment for women to empower other women. It’s fun and energetic and a safe place for people to be able to go.”

And for the Core Fitness crew of two, they don’t listen to anyone’s excuses. They’ve heard it all.

The gym is open Monday through Friday with classes taking place at varying times during the weekdays, as well as one class offered on Saturday morning. Alexander and Justice train group classes as well as one-on-one sessions, plus they offer nutrition advice and cater to each person’s unique goals and experiences.

And, they have a kids’ room for mothers who need the space.

“You’ve put yourself on the back burner long enough. You’re not going to get this time back, so you have to start now.”

As a woman, Justice admits that confidence plays a huge role in one’s fitness journey.

However, part of what makes Core Fitness unique is the facility intentionally lacks mirrors and body weight scales in an effort to make women feel at ease – almost as if they were in the comfort of their own home.

The gym’s relaxed environment also boasts a combination of every type of training a woman would likely want to implement. Justice’s personal favorite ways to train include using ropes, kettle bells and other resistance training, but Core Fitness trains women in cardio and flexibility movements, as well.

Ultimately, Justice, who is currently on her way to become a NASM certified trainer, believes that getting fit requires more than a gym membership. It’s more than skin deep.

“We believe that your fitness journey is not just about your body," she said. "Healthy mind, healthy body. You have to bring it back to why you’re even here in the first place. You gotta start at the core.”

Core Fitness is open Monday through Friday at The Majestic at 150 N. Schuyler Ave., Kankakee. Classes are scheduled throughout each weekday from 6 a.m. to 6:15 p.m., and a Saturday class is offered at 8:30 a.m.