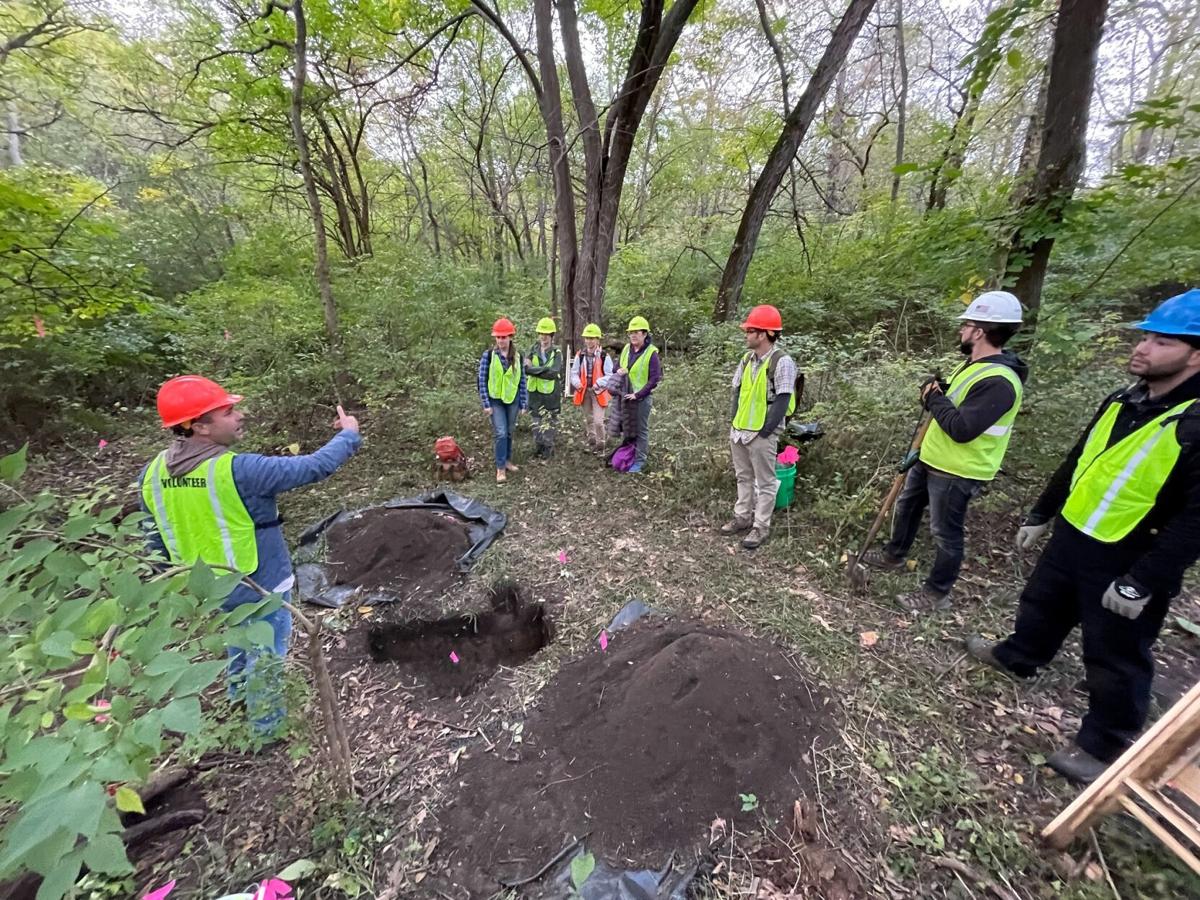 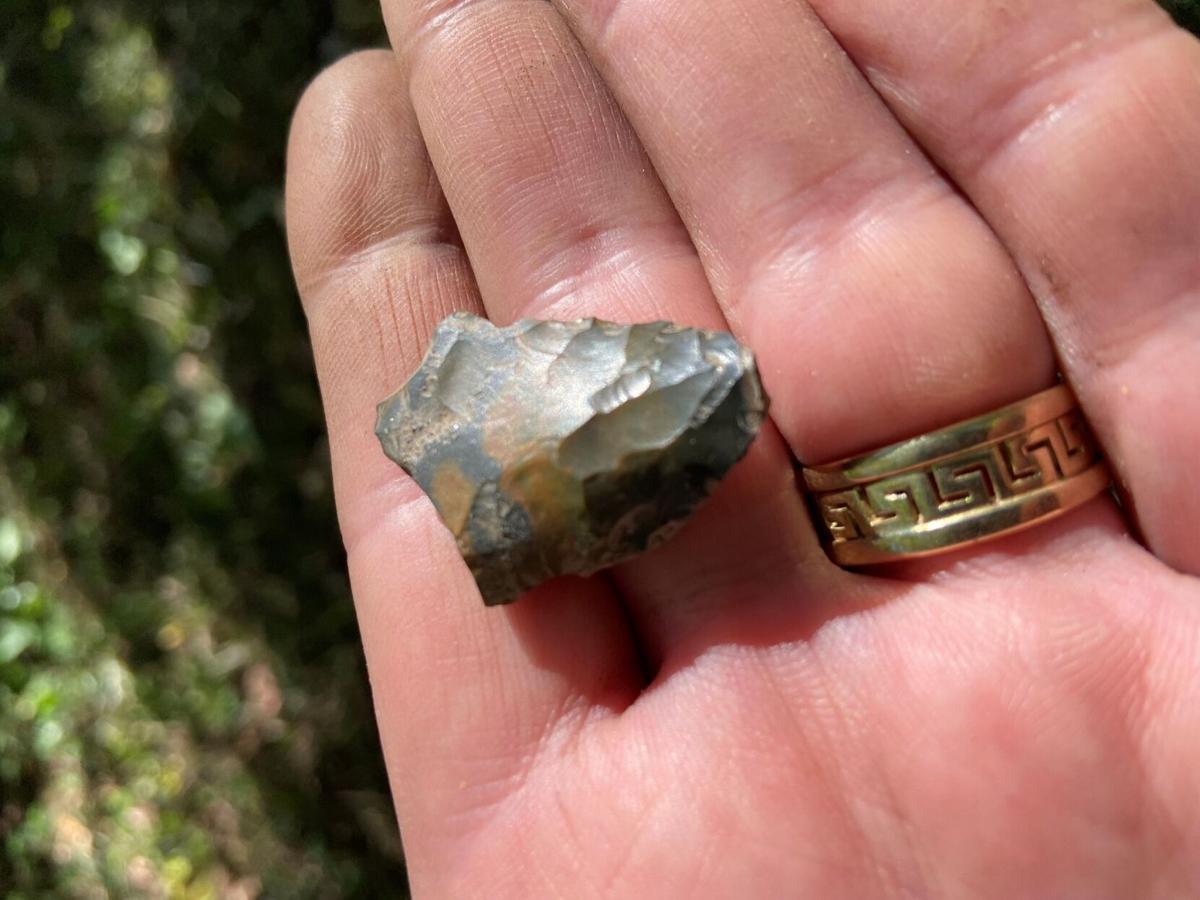 William (Bill) Parkinson holds a prehistoric stone tool, which was shaped for use in chopping, cutting or scraping.

William (Bill) Parkinson holds a prehistoric stone tool, which was shaped for use in chopping, cutting or scraping.

Fragments of pottery sherds and chipped stone tools that are almost 1,000 years old were identified at Midewin National Tallgrass Prairie, in Wilmington, in October during archaeology investigations that are underway through an Organic Act Permit.

After sifting for over a week through shovel after shovel of prairie soil, prehistoric remnants were identified on Oct. 22, approximately halfway through the first week of the project. The tiny pieces are indicators of a vibrant community that was once active here, 50 miles from Chicago, in a riverside area that is thick now with honey locust and black walnut trees.

“The goal of the project is to model the evolution of human-landscape interactions in the Chicagoland metropolitan area throughout the Holocene era,” said field director John (Jamie) Kelly in a news release. Kelly is the head of Anthropology Collections and an anthropology collections manager with the Field Museum of Natural History in Chicago.

“Through sinking shovel tests at Midewin National Tallgrass Prairie, we hope to be able to understand changes in local land use through thousands of years. It is important because people in the past seemed to have used this one relatively small parcel of land despite environmental changes that would have affected the resources available there, as well as cultural changes through time that would have modified people’s strategies for living on, and with, that land.”

The investigations consist of shovel tests – which is basically digging holes – and scraping of the surface of features to validate and define individual feature boundaries. The investigations do not require significant ground disturbance and excavation units will not be opened.

This past summer, The Field Museum of Natural History and the University of Illinois, Chicago (UIC) acquired an Organic Act Permit from the USDA Forest Service for relocating a site that had been located by Northwestern University in the 1980s.

The material identified throughout the project suggested pre-European Native American presence spanning a period of thousands of years. In their report on the project, archaeologists said that the site was a “highly significant cultural resource” with “deep deposits of lithic and ceramic material at high density in a well-preserved context.”

Research in the first half of the 20th Century at the nearby Fisher Site, which is located about five miles downstream along the Des Plaines River, established that communities in the region were an important part of the Late Woodland and Upper Mississippian world (ca. 800-1200 AD); and recent work at the Middle Grant Creek site at Midewin National Tallgrass Prairie has demonstrated how that agricultural village was connected to the broader world during the 17th Century.

“Based on the archaeological materials collected during the initial survey, the site seems to have been occupied shortly after 1,000 AD during the time when local hunting and gathering groups were experimenting with horticulture and settling down into more permanent villages,” said William (Bill) Parkinson in a news release. Parkinson is the curator and professor of anthropology with the Field Museum of Natural History and the University of Illinois at Chicago.

Parkinson and UIC professor Mitch Hendrickson are co-principal investigators on the project.

“The research we propose will help us build a micro-regional narrative about how Native groups interacted with this landscape as they converted from mobile hunters and gatherers to sedentary farmers,” Hendrickson said. This is the first step in building a longer narrative about human-landscape interaction in the region.”

The USDA Forest Service hopes to be able to utilize data from the project to inform and refine strategies to further the objectives of the Illinois Land Conservation Act, which established Midewin National Tallgrass Prairie in 1996. Key priorities include restoration of natural tallgrass prairie and protection of important cultural and historical resources.

The team – which consists of students and staff from UIC and the Field Museum of Natural History – will resume investigations at Midewin National Tallgrass Prairie in spring 2022. They will continue to assess potential for a long-term multidisciplinary, collaborative, research project.