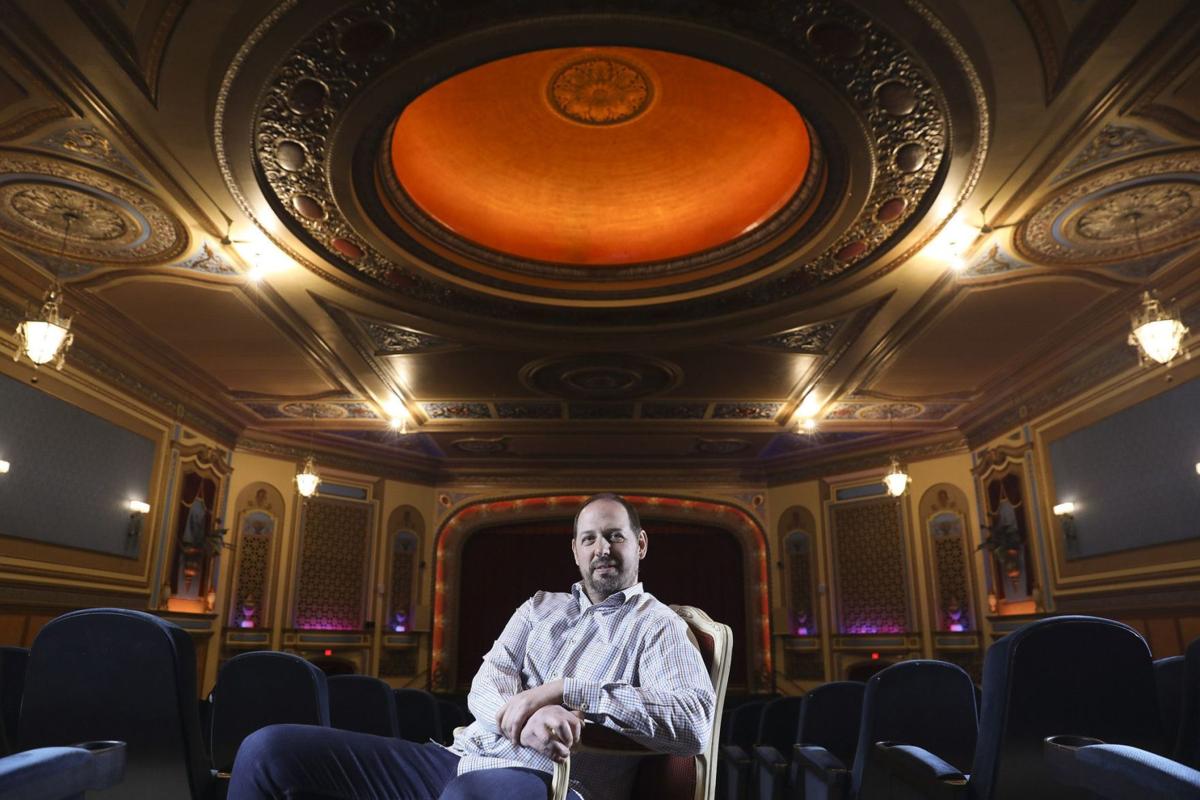 Chris Johnson, CEO of Classic Cinemas, sits inside Tivoli theater in Downers Grove. The family's 15 theaters — including its two locations in Kankakee — have been closed since Gov. J.B. Pritzker's stay-at-home order. 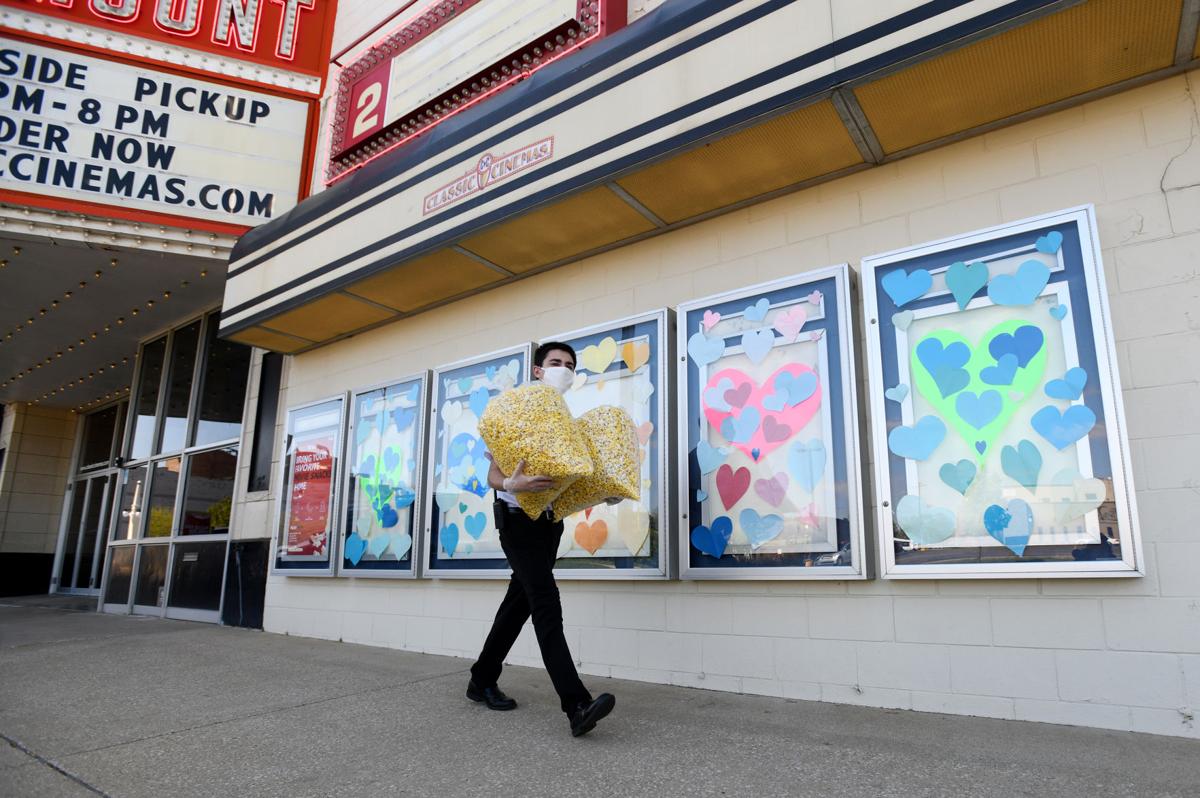 Peter Nicholos, of Kankakee, carries two party bags of popcorn to a customer in early May when the Classic Cinemas theater began offering contact-free curbside pickup. The measure has allowed the local theater to regain some business during the shutdown. 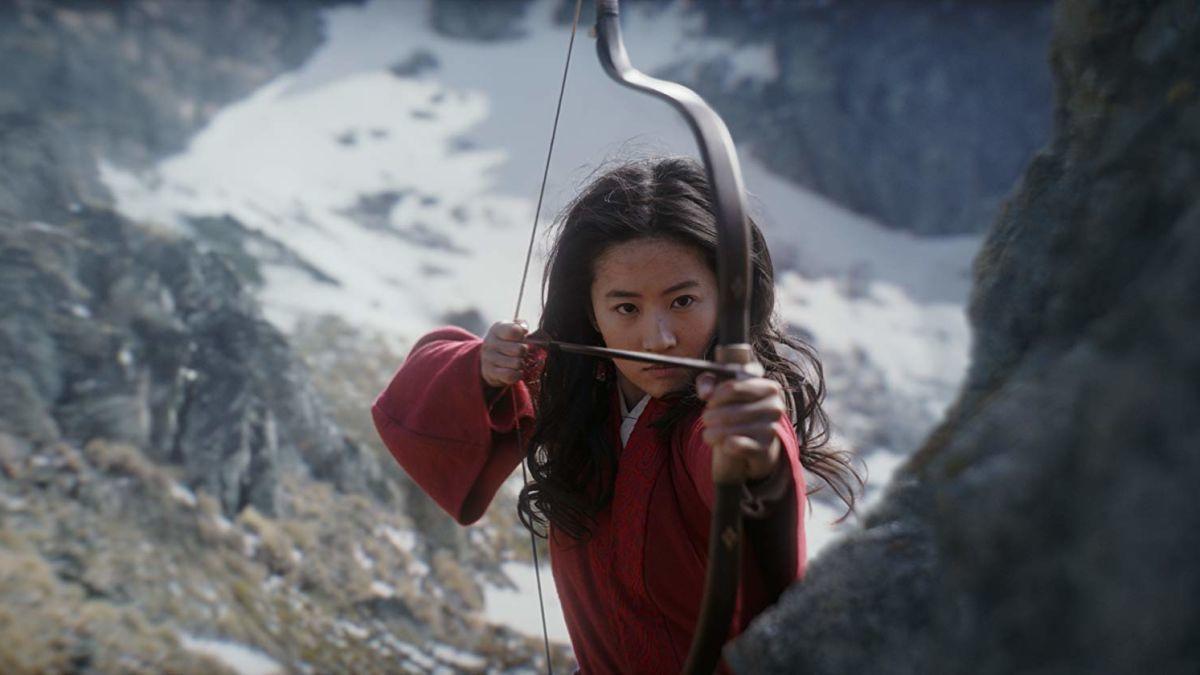 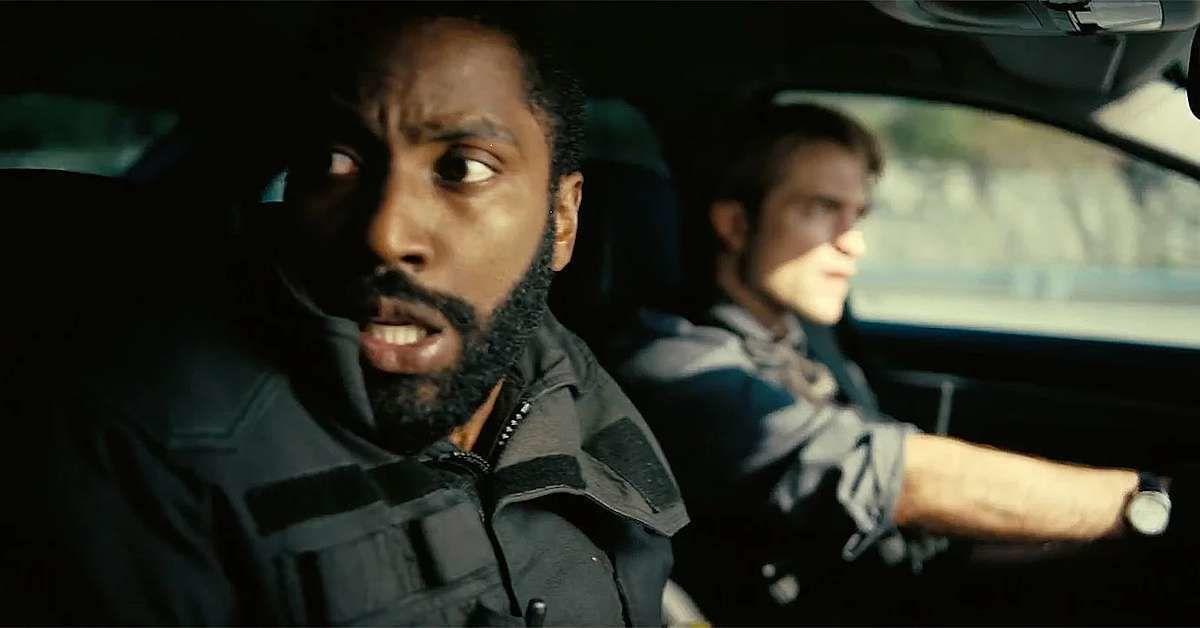 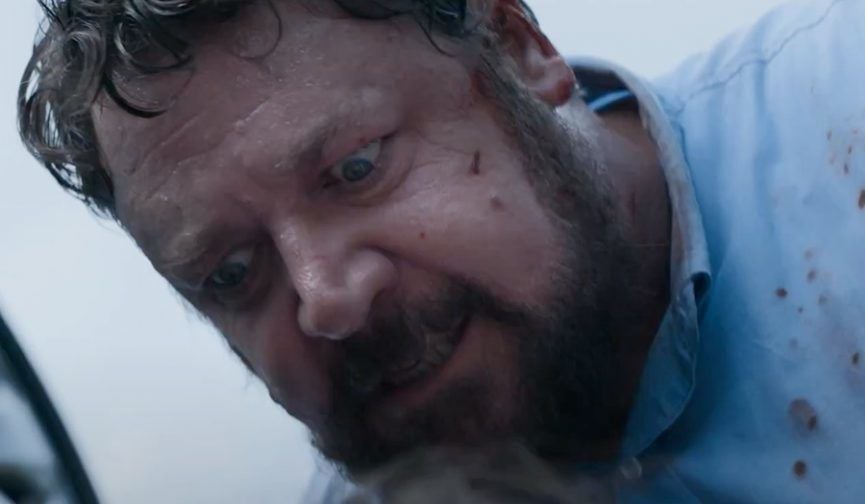 Chris Johnson, CEO of Classic Cinemas, sits inside Tivoli theater in Downers Grove. The family's 15 theaters — including its two locations in Kankakee — have been closed since Gov. J.B. Pritzker's stay-at-home order.

Peter Nicholos, of Kankakee, carries two party bags of popcorn to a customer in early May when the Classic Cinemas theater began offering contact-free curbside pickup. The measure has allowed the local theater to regain some business during the shutdown.

A trade group of Illinois movie theater owners is pushing the state to revise its guidelines to allow cinemas — when they reopen — to seat more than 50 people. That number is currently the maximum outlined under Gov. J.B. Pritzker’s Restore Illinois plan, which has five phases.

The state is moving into Phase 3, which allows for gatherings of up to 10 people in businesses including retail stores, salons and offices. Movie theaters are part of the Phase 4 reopenings, which limits gatherings to no more than 50 people.

The Illinois chapter of the National Association of Theater Owners is hoping to see that number revised and is advocating for a proposal that would instead limit auditorium attendance to 50 percent of an auditorium’s seating capacity.

The trade group also is pushing to open earlier.

No major studio films are on the calendar for June, but there are two big titles still in play for July: writer-director Christopher Nolan’s “Tenet” on July 17 and Disney’s live-action adaptation of “Mulan” on July 24 — both could get pushed back if enough theaters aren’t open nationwide.

In Illinois, the earliest Phase 4 can begin is June 26. That would seem to give theaters plenty of time to accommodate “Tenet’s” opening.

But it’s more complicated than that, said Chris Johnson, CEO of the 15-theater movie chain Classic Cinemas, which operates Paramount Theatre and Meadowview Theatre in Kankakee. He is also president of the Illinois chapter of NATO.

“The ramp up time for our industry is really important,” he said. “The studios make their decisions based on how many screens are available, and if ‘Tenet’ is theoretically opening July 17, they have to start their marketing campaigns now. But they need to know that they have key cities in key markets — and what could happen is, if they can’t count on those markets, they might push the movie down the release schedule.”

According to a spokesperson for the state: “Movie theaters and cinemas are currently slated for Phase 4, the timing of which will be determined by public health metrics. [Department of Commerce & Economic Opportunity] has and will continue to engage NATO and other industry groups as guidelines are developed and as progress is made toward our recovery from COVID-19.”

Johnson said he and his fellow theater owners are less concerned about the timing issue — as long as Illinois does enter Phase 4 by the end of June.

“While later than we want, if we can bank on it, that would be OK,” he said. “The biggest thing we worry about is the capacity issue. Theaters like the Music Box or the Tivoli in Downers Grove, the Pickwick in Park Ridge or even the Navy Pier IMAX and other bigger auditoriums could accommodate more than 50 and still maintain 6 feet of social distancing.”

A number of theaters, he said, have reduced seating capacity in recent years, replacing standard seats with recliners that take up more space.

“So if you have an auditorium that used to seat 150, now it seats 50. But now you’ve got to social distance, so you’re down to next to nothing. So to compensate, we’d like to offset that in the bigger auditoriums. If you’re just stuck with that 50-person maximum, then you’re not going to be able to gross as much, and it’s not as attractive to the studios,” which take a hefty percentage (at least 50 percent but often more) of each ticket price.

Johnson stressed “we want to make sure everybody knows, we want to open in a safe and appropriate manner. We want to work with the protocols that are out there.”

Other measures the trade group is recommending:

• Employee training on enhanced cleaning procedures, social distancing and the use of masks and gloves

• Mandating a 6-foot distance between parties in an auditorium

Without a slate of new films to screen initially, theaters will need to rely on older movies. “But it isn’t like, we’re going to open the doors and everybody’s going to rush to the movie theater,” said Johnson. “So, by opening up a little early, it gives us a chance to acclimate our staff and the audience to this new process and procedures. It will give us an opportunity to refine the operation.”

Moviegoers will be required to wear masks when entering the theater and buying concessions but, once seated, will be allowed to remove their masks to eat and drink. (Conversely, patrons will need to put their masks back on to make a trip to the restroom or when exiting the theater.)

Time is of the essence

“We’re trying to work to avoid getting to that point,” Johnson said. “Whenever I read stories in the paper about ‘This industry is down 30 percent’ or ‘That industry is down 70 percent’ — we’re down 100 percent. So, getting open and having the opportunity to do something is important. The sad part is, the summer is our busy season; it always outweighs the rest of the year because people are out of school on summer break.”

Ultimately, whether “Tenet” and “Mulan” open in July will be a decision left up to the studios: Warner Bros. and Disney. The other big question is whether enough moviegoers will feel comfortable and safe returning to theaters.

“Warner Bros. has reached out on a regular basis, and they want to know the status of the markets that they’re not sure of,” said Johnson. “So, they’re making decisions accordingly. I certainly am hopeful that we’re going to hit the June 26 date [for Phase 4].”

By the way, there is one other movie slated to come out in July: A thriller called “Unhinged” starring Russell Crowe, set to open July 1.

“It’s a brand new film that was supposed to be released in September,” Johnson said. “Because of the shutdown ‘A Quiet Place Part II’ moved to that same date and the studio behind ‘Unhinged’ didn’t want to go up against it, so they’re taking quite a risk and they’re going to be a warm-up act for movie theaters. We are very appreciative that they’re going out on a limb.”

Which films from the archives would Johnson like to see in his theaters to tide audiences over until there are new releases available?

“I always like ‘The Big Lebowski.’ Comedies are always good. For some reason I was thinking about ‘Tommy Boy’ and Chris Farley the other day. ‘Groundhog Day’ might be one since, with the quarantine, it feels like we’ve been living that movie for the past couple months.”

A psychological thriller that takes something we've all experienced — road rage — to an unpredictable and terrifying conclusion. Story centers on a divorced single mother who begins to be stalked and tormented by a stranger after a confrontation at a red light. It’s a case of road rage turned into full-blown terror.

John David Washington is the new Protagonist in Christopher Nolan’s original sci-fi action spectacle “Tenet.” Armed with only one word — Tenet — and fighting for the survival of the entire world, the Protagonist journeys through a twilight world of international espionage on a mission that will unfold in something beyond real time.

Acclaimed filmmaker Niki Caro brings the tale of China’s legendary warrior to life in Disney’s "Mulan," in which a fearless young woman risks everything out of love for her family and her country to become one of the greatest warriors China has ever known. Masquerading as a man, Hua Jun, she is tested every step of the way and must harness her inner-strength and embrace her true potential. It is an epic journey that will transform her into an honored warrior and earn her the respect of a grateful nation and a proud father.

"Whenever I read stories in the paper about 'This industry is down 30%' or 'That industry is down 70%' — we're down 100%. So getting open and having the opportunity to do something is important."